Adverbs are modifiers. They alter the meaning of words ‒ verbs, adjectives, other adverbs, and even whole sentences. Writers use adverbs to add color and refine meaning.

Many writers think of adverbs as the -ly words, but there are many without an -ly ending. Here are some common examples:

Most (but not all) adverbs end in -ly. Examples include quickly, helpfully, apprehensively, grumpily. The adverb adds more nuanced information to the verb.

Each of those sentences paints a different picture because of the adverbs.

What is a Redundant Adverb?

An adverb is redundant if you use it to modify a verb with the same meaning in its definition.

It’s not possible to shout quietly, so the word loudly is redundant.

Again, if Anna is smiling, we already know that she is happy.

Here are a few more examples of adverbs that repeat the meaning of the verb they’re trying to modify:

All of those words can be removed without altering the meaning of the sentence.

You can teach yourself to minimize adverbs by recognizing the proper times to use them.

First, eliminate redundant adverbs that are unnecessary and repeat what the verb means.

Here's an example: She smiled happily. The verb "smile" implies that she is happy. When someone smiles, they show happiness. If you want to emphasize her joy, try a stronger verb. She grinned. To learn more about using strong verbs in your writing, check out this post.

However, you can use an adverb to good effect if the situation is unusual for the verb, e.g. She smiled sadly. Here the adverb provides vital information: there are two contrasting emotions happening at the same time.

Do a search through your manuscript for all the adverbs. Check each one to make sure you need it in the sentence. Review your verb to think about replacing it with a stronger, more descriptive one; for example, grinned for smiled happily, stomped instead of walked angrily, etc. 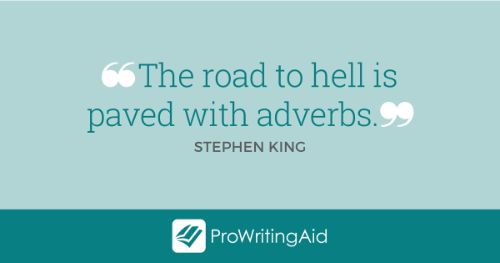 Eager writers are tempted to add adverbs to attributions. If you feel you need an adverb, rewrite the dialogue.

“I’ll never, ever talk to him again,” she said angrily.

The dialogue says it all – it's clear that she is angry with him. No need for the adverb.

Certain adverbs have no place in narrative. If you find these adverbs, take them out. Adverbs to eliminate from your manuscript include:

Characters can use them in dialogue, but there’s no place for these adverbs in your narrative. 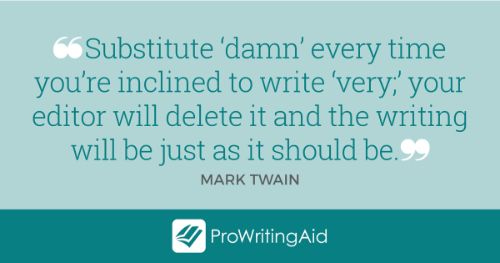 Adverbs in the Wrong Place

As you check your adverbs, you may decide that some will stay. Make sure those adverbs are in the right place in the sentence.

An adverb in a sentence with two verbs may be placed incorrectly.

He watched as she ran meditatively.

Readers will connect the adverb with the closest verb, so you want to make clear to your reader who is meditating.

He watched meditatively as she ran.

One adverb that needs careful attention for placement is only. Use it after the verb and place it as close to the word it modifies as possible.

Grammar Girl uses grammarian James Kilpatrick’s example of how placing only changes the meaning of a sentence.

Only John hit Peter in the nose.

John hit only Peter in the nose.

John hit Peter only in the nose.

John only hit Peter in the nose.

When using only, make sure you know what you want to emphasize, then use the correct placement so that it’s clear to your reader.

When to Use Adverbs

Adverbs aren’t inherently good or bad: it’s all in how you use them. Let’s unpack when you should—and shouldn’t—use adverbs.

Use an adverb when…

1. It adds context or new information. For example, adverbs help you show time and place.

A well-placed adverb can give emphasis to your meaning. Consider how a woman being late to her wedding differs from one who is intentionally late.

2. It can replace clunky phrasing.

3. Other words won’t work. Sometimes an adverb is exactly what you need. As smart as algorithms and machine learning code are, they cannot pick the right word every time. Only a writer or her editor can do that. That’s why writing is an art and not a science. Make sure you use adverbs sparingly and thoughtfully.

Replace an adverb when…

1. It restates part of the word it modifies or is redundant.

2. It modifies a vague or weak verb.

You can easily replace "called loudly" and "rose quickly" with stronger verbs that are more emotive.

3. You use "very" or "really." What does "very" mean? Nothing solid, right? So whenever you feel obliged to drop in a "very" or a "really," find a stronger word than these weak amplifiers.

How to Remove Adverbs From Your Writing

Worried that there are too many adverbs in your work? Most grammar checkers will miss adverbs, but ProWritingAid can help.

What is a squinting modifier?

Why should I avoid adverbs in my writing?

Why shouldn't you use the word "very" in your writing?

Why should you avoid intensifiers like "absolutely" and "amazingly"?

Why shouldn't you overuse words like "just" and "then"?

When to use "just" in a sentence?

What's the proper way to use adverbs?

How to use "of course" in a sentence?

What is the correct way to use negatives in a sentence?

Should I use "a bit of" in a sentence?

When can we omit "put simply" in a sentence?

Should I use words like "accordingly", "additionally", "consequently", "furthermore", or "moreover" in my work?

Why can we omit "clearly" in a sentence?

When can I omit "currently" or "presently" in a sentence?

Why should you omit "that" in such phrases as "any/so that + pronoun"?

Why should you omit "certainly" in a sentence?

Should we omit "indeed" in the sentence?