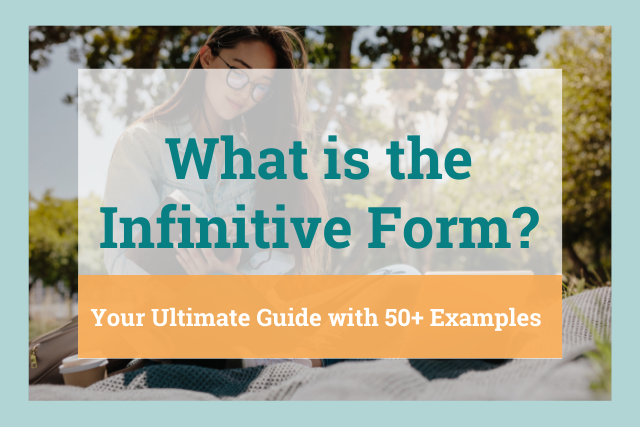 What Does the Infinitive Form Mean?

The infinitive form is the most basic form of a verb. It doesn’t have a tense, and it isn’t tied to any one subject in a sentence.

In the sentence He is going to go to the shop., "to go" is the infinitive. You can normally spot an infinitive because it has to at the start (though sometimes they don’t—more on that later).

If we change who is going to the shop, like this:

you can see that the infinitive, to go, doesn’t change. 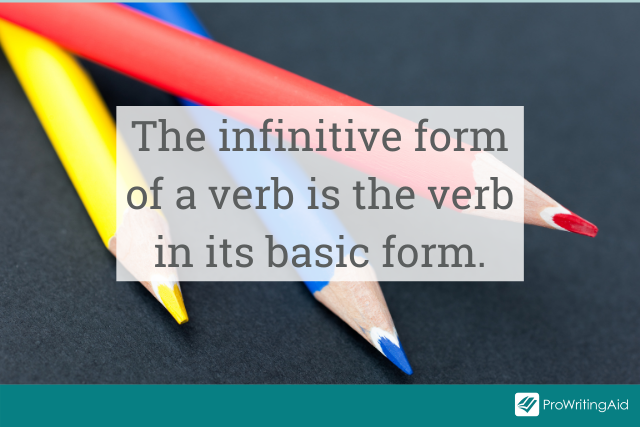 It’s the same with tense. Whether you’re writing in the past, present, or future tense, the infinitive stays the same.

Past: They wanted to go to the theatre.

Present: Do you want to go to the theatre?

Future: I am going to go to the theatre next Saturday.

This is because the infinitive is never the main verb in the sentence. In the examples above, the main verb phrases are "they wanted," "you want," "I am going."

As you can see, those phrases do change according to the tense and the subject. This is a good way to tell the difference between normal verbs and infinitives.

How Do You Write the Infinitive Form?

(Again, sometimes you can get rid of the "to," but we’ll look at that later.)

What Is a Verb?

Need a quick refresher on verbs? No problem. A verb is a doing word. They denote an action or a state of being. Here are some verb examples:

It’s important to note that some of these words aren’t always verbs in every sentence—some can also be used as nouns. Check out our complete guide to verbs for more info.

So, how do you turn those verbs into infinitives? Just add "to."

Here are 15 more examples of the infinitive form to help you learn how it works:

As you can see, the infinitive stays the same regardless of tense or sentence subject.

Most of the time, you won’t need to be able to name the exact type of infinitive you’re using, and the definition above will be enough to get you through.

But just in case you need to know what the full infinitive and the bare infinitive are, we’ve got you covered.

You may have also heard of the bare infinitive. All this means is that we take away the "to" (eat, dream, dance). 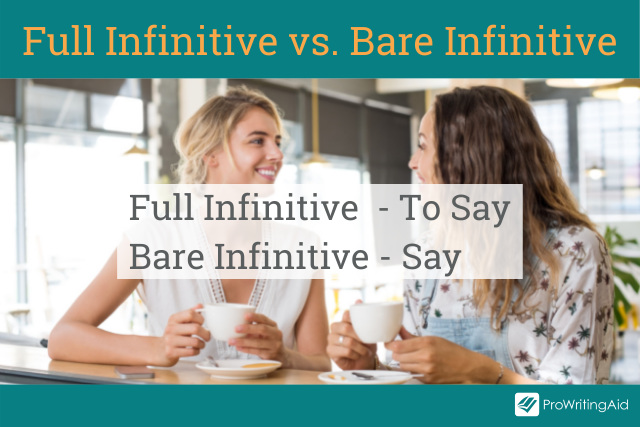 How Does the Bare Infinitive Work in a Sentence?

She could play the piano beautifully.

It would be wrong to write She could to play the piano beautifully.

If you’re unsure whether to use "to" with an infinitive, check with ProWritingAid. It’ll highlight when you’ve used an infinitive incorrectly and show you how to fix it: 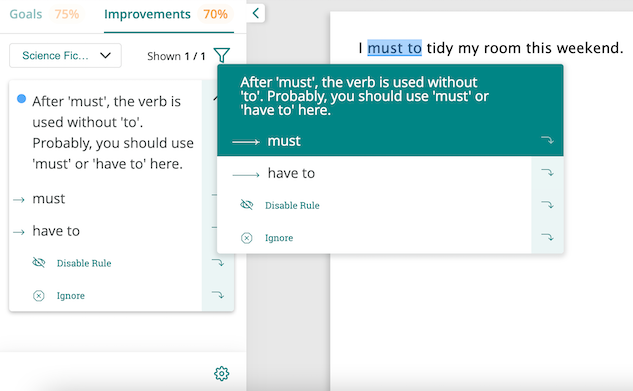 Download our browser extension to make sure you write well wherever you write.

Here are some examples of bare infinitives in a sentence. They’re in bold to help you spot them.

Can I Use an Infinitive as a Noun, Adjective, or Adverb?

What a specific question! Yes, you can use an infinitive as a noun, adjective, or an adverb. In each case, the infinitive will play a different role in the sentence:

What Are Examples of an Infinitive Used as a Noun?

When you use an infinitive as a noun, you use it to denote an idea or thing, like this:

To know stands in for the thing that I want in this sentence (knowledge). This infinitive therefore acts as a noun. 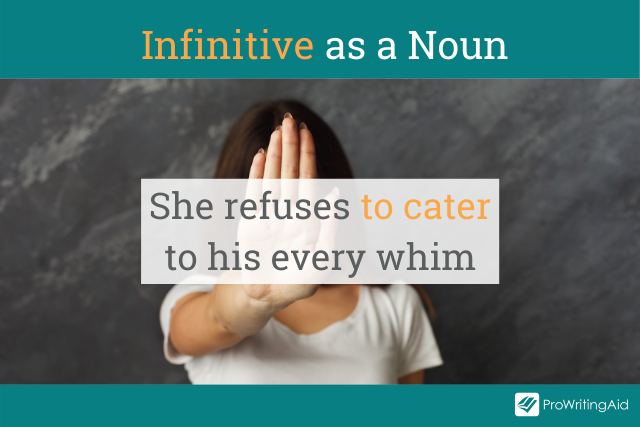 Here are some more examples:

As in the examples above, the noun infinitive phrase can go at the end or the beginning of the sentence, though it’s more common to see it at the end.

How Do I Use the Infinitive as an Adjective?

An adjective describes a noun. So when you use an infinitive to describe a noun, you’re using it as an adjective.

Here, the noun is "attempt." The phrase "to win the gold medal" describes the noun—the "attempt."

What Are Examples of the Infinitive Used as an Adverb?

When you use the infinitive to modify (or change the meaning of) a verb, you’re using it as an adverb. 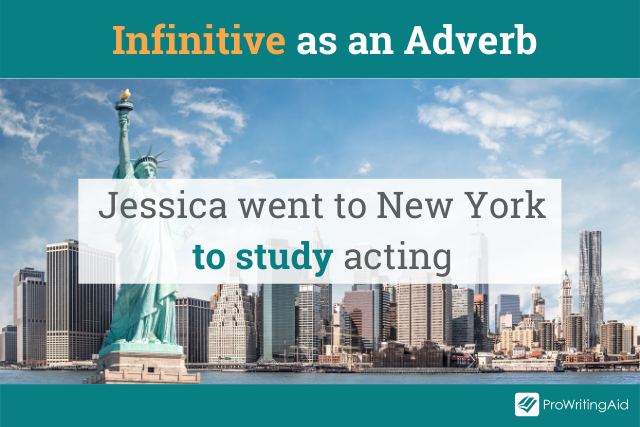 As you can see, the infinitive phrase can go at the beginning or end of the sentence:

What Does the Infinitive Phrase Mean?

You’ve already seen some infinitive phrases in the examples above.

Here are three of those examples with the infinitive phrases highlighted:

As we’ve said, an infinitive phrase can go at the beginning or end of the sentence, but the end is more common. A famous exception is the line "To be or not to be, that is the question" from Hamlet. 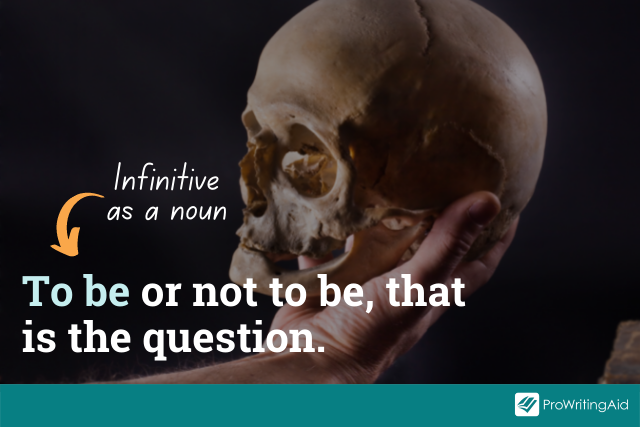 You can use infinitives to make lots of different kinds of statements. Let’s look at a few.

To Explain a Description of Something

Infinitives are used after an adjective to expand an idea. For example:

Here, we are told not only that the puppy is naughty (adjective) but that it was the action of destroying the sofa that made him naughty. The infinitive to destroy expands on the adjective, naughty.

Examples of infinitives being used to explain adjectives: 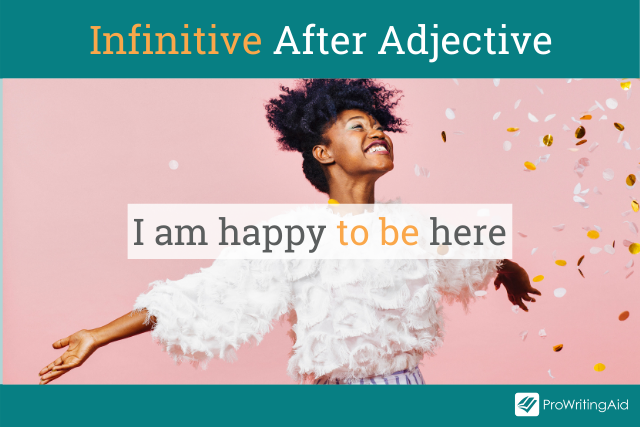 To Explain Why You Like/Dislike Something

If you use an infinitive with the words "too" or "enough," you can express the reasoning behind satisfaction or dissatisfaction.

The bowl is no good because it isn’t big enough to fit all the sugar.

Use infinitives to make a comment or judgment about a noun in a sentence.

Here, the infinitive tells us that the judgement is being made specifically about behaviour.

More examples of making a judgement with an infinitive:

To Ask a Question

The verbs ask, decide, explain, forget, know, show, tell, and understand can be followed by a question word such as where, how, what, who, and when + the infinitive to form a question.

It’s easier when you see some examples: 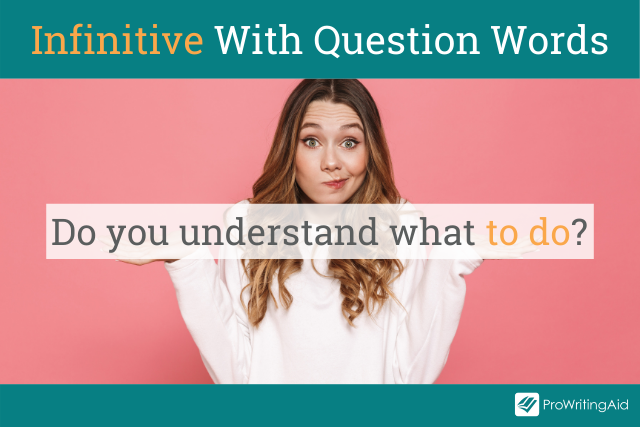 Now you know what the infinitive form is, you can begin to add infinitive phrases to your sentences.

See what we did there?