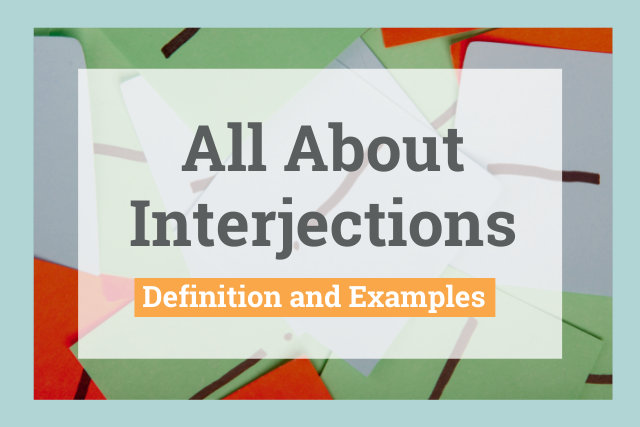 The job of an interjection is simply to express an emotion.

Interjections are "emotion words," or spoken emotional outbursts, that can be presented as a single word, a phrase, or utterances that express an intense feeling.

If you’ve ever yelled “Oh no!” or “Say what?” or “Yippee!” or other similar expressions, then you’ve used an interjection.

What Is an Interjection?

An interjection is one of the eight major parts of speech. But it’s the maverick of that family. Unlike its siblings (verbs, nouns, pronouns, adjectives, adverbs, prepositions, and conjunctions), interjections have no grammatical connection to the words around them.

Grammatically, the interjection is completely independent. It doesn’t rely on any other words or phrases in the sentences to help establish its meaning or function in that sentence. 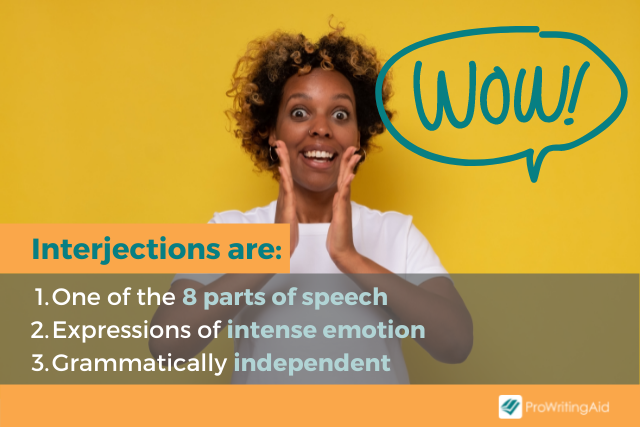 Here are a few interjection examples:

Ouch!, Shoot!, and Yay! are all examples of interjections. 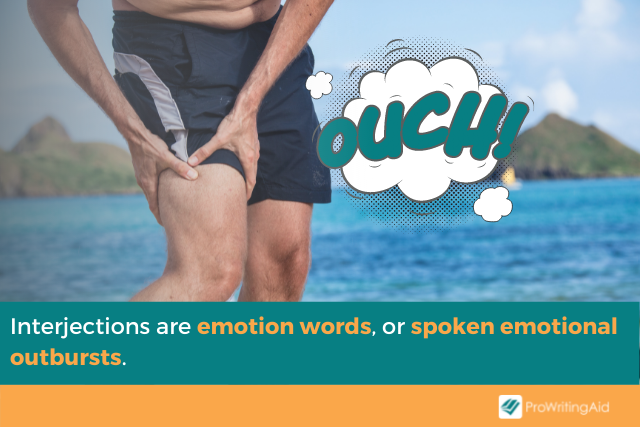 The word interjection comes from the Latin word interjicere, which means “to throw between.” Interjections were (and are) seen as words that were thrown into sentences, like incoming emotional explosions, without having a grammatical relationship to the other words in the sentence.

Removing the interjection from a sentence won’t change the meaning of that sentence, but it will take away some of its emotional power.

How to Use (And Not Use) Interjections

Interjections have their place, and formal writing is not it. 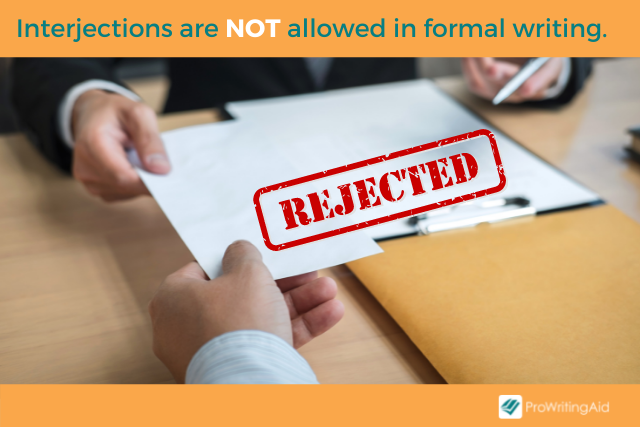 Academic papers, research studies, business communications, and serious investigative reports are undermined, not elevated, with interjections like “Oh my gosh! Can you believe these results!” or “Ugh! They passed the law!” Interjections aren’t serious words; if you use them in serious contexts, readers or listeners might think you don’t take your own work seriously.

When You Can Use Interjections:

In Everyday conversations (though not in a formal speech)

Think about it: you’ve probably used several interjections in conversations today already. They help us express what “plain old words” can’t get across.

For example, you’re sitting across from your friend at the only open diner you could find, and the place seems pretty shady—but you’re both really hungry and you figure that no one can ruin eggs. The server sets your plate of food down in front of you and proves you wrong. You say “Blech!” and your friend knows how bad it is, even more than if you’d said “These eggs taste really bad.”

For example, when I was a kid, I had a great-aunt Tillie. She used the interjection “Oh good gravy!” whenever she experienced shock or amusement. Her interjection was a bit old-fashioned, just as she was, and avoided even the slightest whiff of vulgarity or rudeness, just like she did!

In fiction, interjections are especially revealing when used in dialogue—when characters talk to each other—or narration, when the character speaks to “us,” their audience.  For example, have you met the narrator of Poe’s “The Tell Tale Heart?” His devious “oh no!” as he stalks his victim, and unhinged  “ha ha” as he celebrates how successfully he cleaned the murder scene emphasize his derangement and psychopathy (though his murderous behavior serves as a major clue as well)!

That doesn’t mean the work itself isn’t about a serious topic, but you may be discussing it in a more conversational tone than that of an academic paper. Or you may be writing a personal narrative. For either scenario, interjections can help achieve a more casual, relatable tone.

For example, in an article for The New York Times reporting on the discovery that some mammals glow fluorescent (so cool!) when under a blacklight, Cara Giaimo describes the moment when Bubbles, a Tasmanian Devil, finally got her glow on:

Eventually, Bubbles cooperated. When the UV flash went off, voilà: A cool blue glow emerged around her eyes, at the bases of her whiskers, and inside the cups of her ears.

As with just about anything, though, moderation is a good rule to follow with your use of interjections. Use them too often, and your interjections are likely to become distracting and annoying to your audience.

How to Use Interjections in a Sentence

Interjections can appear at the beginning, middle, or end of a sentence.

At the beginning (or before) a sentence, follow interjections with commas, exclamation points, or question marks, depending on the emotion you want to convey and the intensity of that emotion.

At the end of (or after) a sentence, an interjection is usually followed by an exclamation point or period—again, depending on the emotion and intensity you wish to express.

Using interjections in the middle of sentences is less common, except in actual conversation where we tend to use “umm” or “hmm” or “like” as we gather our thoughts; those interjections are usually less intentional. Other times, we may use them to emphasize a point.

Either way, if you are writing dialogue and those “umms” are part of it, set the interjection off with commas. 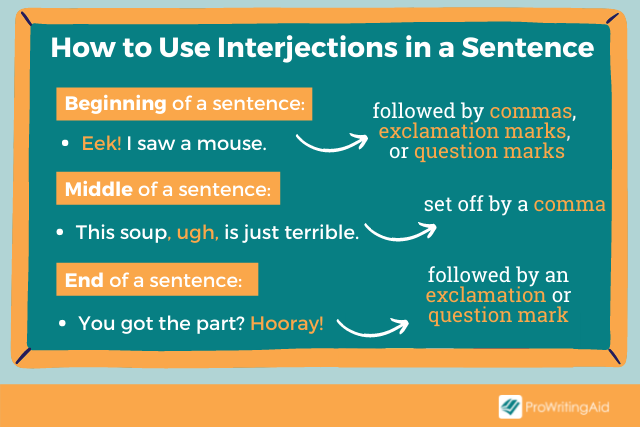 There’s one more punctuation possibility for those mid-sentence interjections. Perhaps you’re writing a more casual email or a personal narrative or memoir and you want to use those interjections as a side comment. You can opt to put the interjection in parentheses or set it off with em dashes.

As you can see, interjections are versatile grammatical creatures.

They can make an impression by appearing next to a sentence, but separated from it by an endmark; they can also make their point as an included part of a sentence.

And there’s still one more trick hiding up the interjections' sleeves. Sometimes, they can get a meaning across as standalone words, as shown in these interjection examples:

Texting really has its own set of rules for grammar and punctuation—and even those rules can vary, usually depending on age.

And while CNN has reported on the rebellion against the laughing/crying emoji among some Gen Z-ers, that emoji and all the others have taken on the role of interjections in texting language. 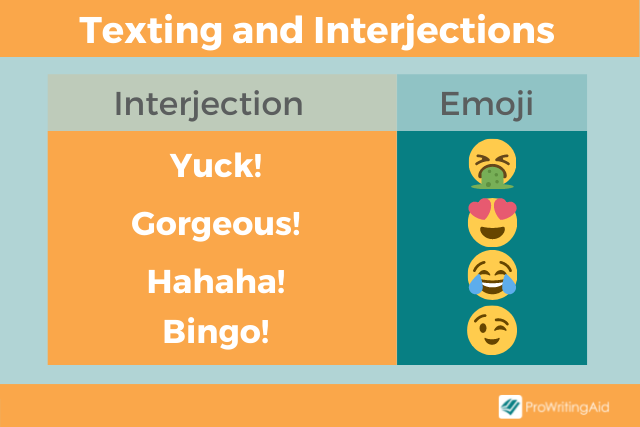 The subtle differences in emoji options do what a comma, period, exclamation point, or question mark can do to add nuance to written interjections.

Are Interjections the Same as Onomatopoeia?

No. It’s easy to confuse the two as both are usually offered with energy and are not “typical” words. 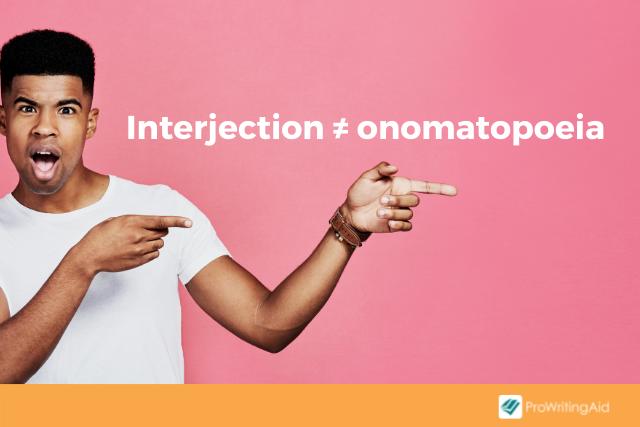 However, onomatopoeia means using a word that is formed to match the sound that it describes. Animal sounds are common examples of onomatopoeia. In other words, onomatopoeic words imitate sounds.

An interjection expresses emotion. Interjections are words that express a reaction or feeling; they are not words that imitate—except for the few occasions where they do both things.

For example, “Blech!” is an interjection, but the sound of it imitates the sound of retching, which is associated with disgust.

“Ahem” is another example. It sounds like a person clearing his or her throat, which is what a person does in order to get someone else’s attention. When a person interjects with an “ahem,” they are responding to a rowdy crowd, or inattentive audience, with a “listen up!”

For the most part, there isn’t a lot of intersection between interjection and onomatopoeia. They have distinct functions, and it isn’t very often that both functions are fulfilled by the same word.

Some Final Reminders for Using Interjections

Remember to use your interjections strategically, and remember where they don’t belong.

Trying to establish a conversational tone, develop a character, or express an emotion during a (non-professional) conversation? Then add interjections! Don’t overwhelm your work or speech with them, though. 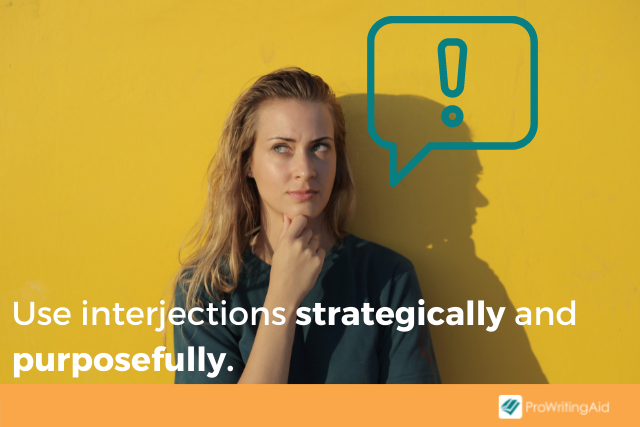 Have you ever listened to a person who drops “like” or “um” or “OMG” so frequently that it’s the only thing you remember them saying? Or maybe they constantly interject with over-the-top intensity that undermines any sense of sincerity. You don’t want to do that to your audience.

This is trickier than it sounds, because interjections are so tied to our individual character. Make sure you're using interjections purposefully with ProWritingAid's Repeats Check. It'll highlight all the repeated words and phrases in your document so you can edit them out if you need to. 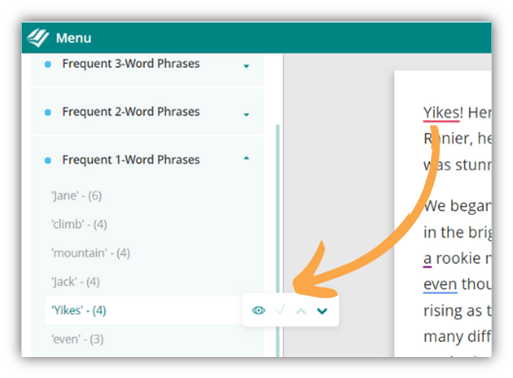 Finally, leave interjections out of your formal speeches and writing. Interjections are colorful and fun, but formal occasions often require the proverbial black tie; keep your words in more subdued shades of black-and-white for those formal deliveries.

Should I use a comma after interjections?