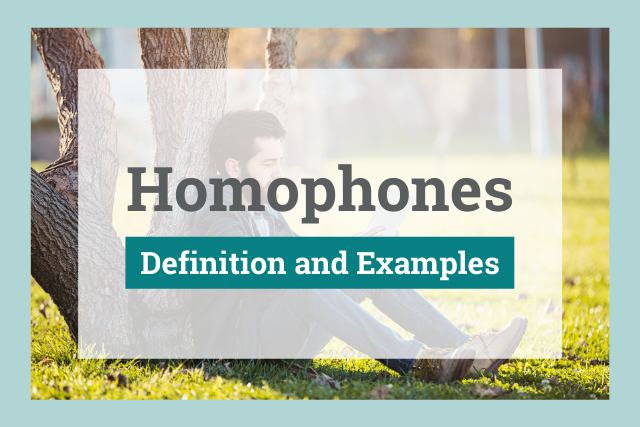 What Is a Homophone?

A homophone is a word that sounds the same as another word but is usually spelled differently and has a different meaning. Homophones may consist of two or more words, although pairs are more common than three or more words that sound the same. Examples of homophones that have three words are to, too, and two, and their, there, and they're.

The English language is, honestly, a bit of a mess, and homophones are extra tricky. Today, we're learning what homophones are, how to use them correctly, and where you can find homophones hiding in English.

What Is the Difference between Homophones, Homonyms, and Homographs?

Do homophones always have different spellings? Well, it depends on who you ask. Let's look at some other types of tricky words.

There are homophones, homographs, and homonyms. That's enough to make anyone's head spin! How do you tell the difference?

We can start by looking at the etymology of the words. The prefix homo- means "same." The root phone comes from the Greek word phonos, which means "sound." That means a homophone has the same sound. You can remember this by thinking of a phone, which we hear sounds through. 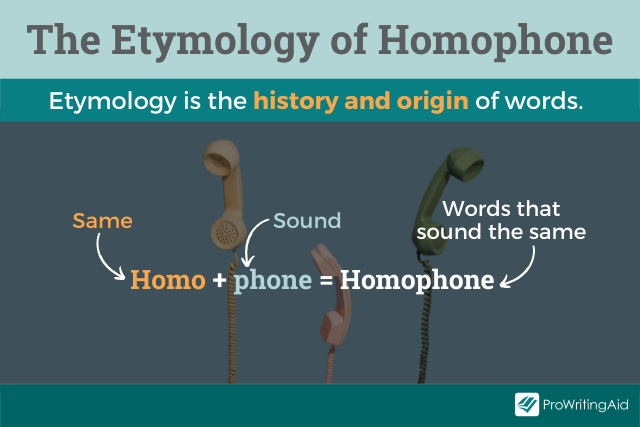 An example of a homophone pair is fare and fair. They sound alike but have different meanings. They are also spelled differently.

The root graph derives from the Greek graphein, which means "to write." Same + write tells us that homographs are words that are written the same. They have the same spelling but different meanings and sometimes different pronunciations. Remember this by thinking of graphite, the part of a pencil that writes. 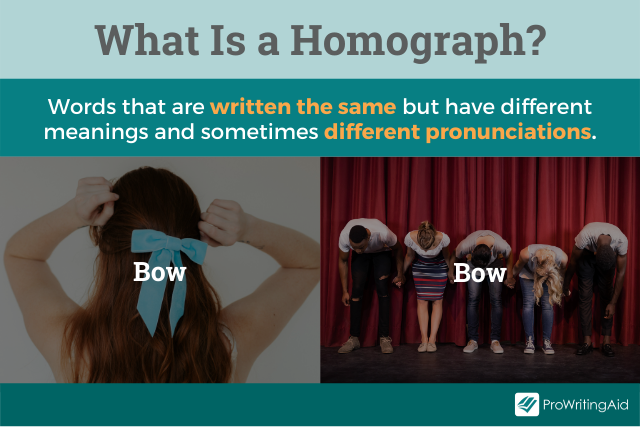 Now, let's look at homonyms. Nym comes from the Greek word for "name." Homonym means "same name," but the definition of a homonym really depends on who you ask.

Some resources say that “homonym” only applies to words that are spelled the same but are pronounced differently in addition to having different definitions. In other words, it's a homograph that does not sound alike.

Other resources say that a homonym is a word that is both a homophone and a homograph. It sounds the same, looks the same, and has different meanings.

One example of a homonym using this definition would be pitcher. It can mean the person who throws the ball in baseball or a vessel for pouring water. They sound the same and look the same, but they have different meanings. 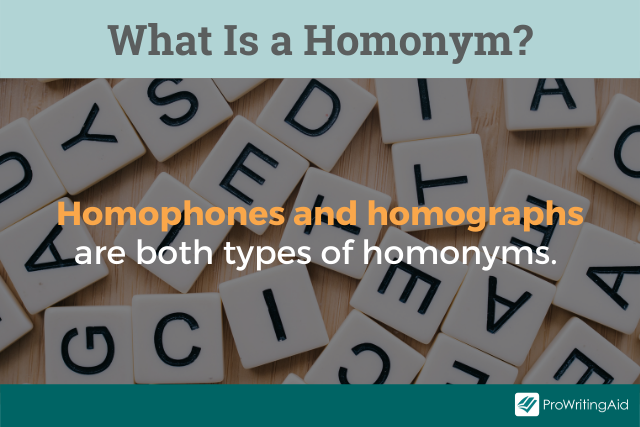 Still others think that homonym is more of an umbrella term. Homophones and homographs are both types of homonyms. This is the definition we will use.

Now that you know the difference between the types of homonyms, let's learn about homophones in more detail.

Homophones rhyme because they are words that sound alike. When words rhyme, they have the same ending vowel sound. All homophones are rhymes, but not all rhymes are homophones. 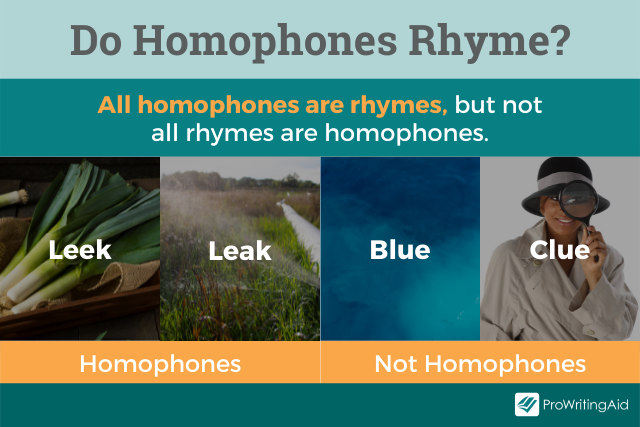 What Are the Most Common Homophones in English?

There are thousands of English homophones. It's hard to pin down an exact number because some words are homophones depending on regional accents. For example, sometimes people say "then" and "than" exactly the same, while others emphasize the differing vowel sounds. 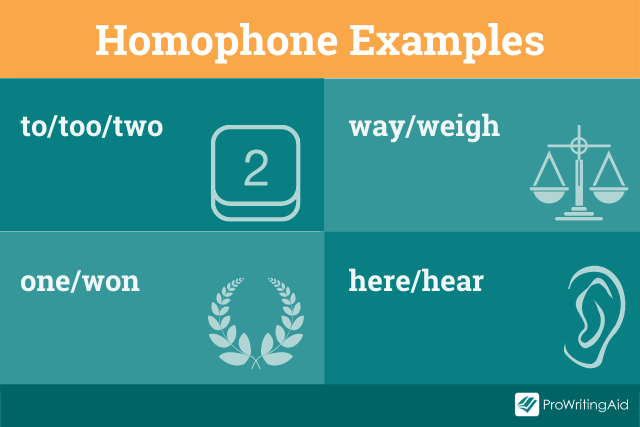 Here are a few examples of common English homophones. We'll go into more detail on some of these in a later section:

These are just a few of the most commonly confused homophones in English. We'll look at even more examples in the following sections.

How Do I Know Which Homophone to Use?

It's important to know which homophone to use to ensure your meaning is clear. But how can you keep up when there are so many homophones to use?

Some homophones have tricks to help you remember them. Let's look at one of the most commonly confused homophones: to/ too /two. It's extra tricky because it contains more than two words.

To is a preposition with several meanings. Too means extra or excess. You can remember this by thinking "too has too many Os." Two is the number 2. Remember "twins" to remind you that we spell this homophone with a TW. 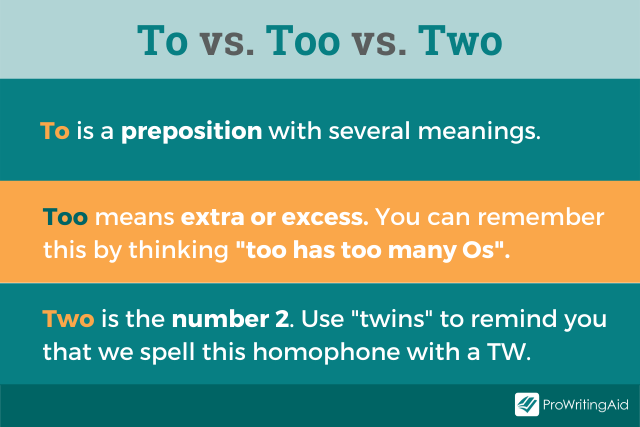 Mnemonic devices can help you remember the difference between two or more words. But there are just too many homophones to come up with a cool trick for all of them!

You can always check the dictionary. Or you can use ProWritingAid. Our Homonym Report will check for all of the homophones and homographs that you might have mixed up in your writing. You can find this report under “More Reports” or add it to your “Combo Report” settings to check for homophones every time.

Try the Homonym Report with a free ProWritingAid account.

What Are Some Examples of Homophones?

We've looked at a few examples of English homophones, but there are so many! Let's go more in depth with our examples.

What Are Some Common Homophones with Their Definitions?

We hope these definitions clear up some confusion about common homophones. But how do you use these tricky homophones in your writing?

What Are Some Examples of Homophones in Sentences? 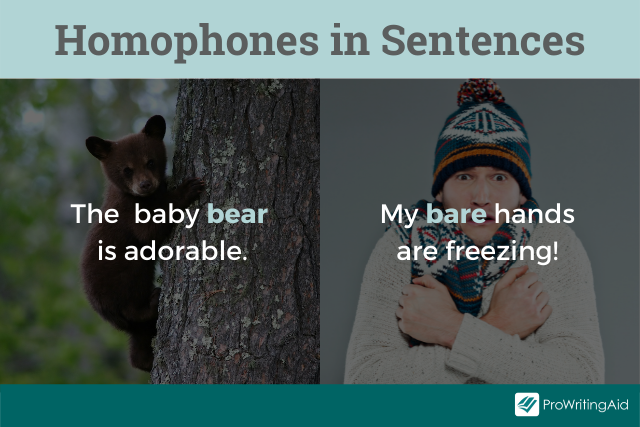 We've defined several homophones that are all spelled differently. But the best way to understand homophones is to see them in the wild. Here are some example sentences with homophones.

We could give you homophone examples all day! But now you can apply what you have learned about homophones to your own writing. Can you think of any other homophones that we didn't include? Let us know in the comments.

ProWritingAid works wherever you do 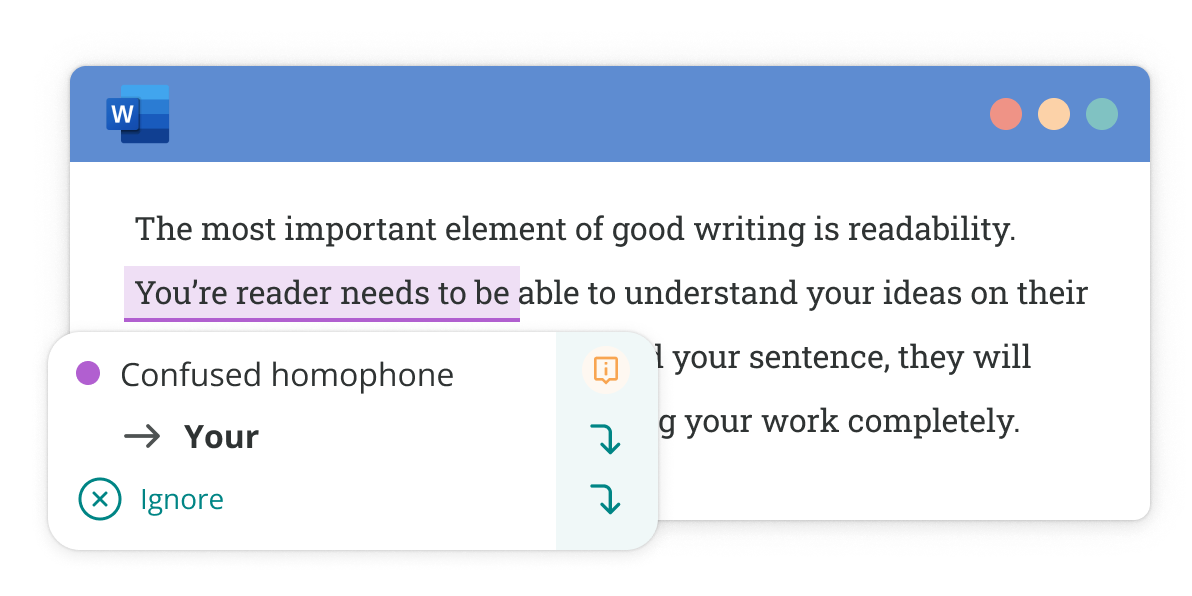