Prepositional Phrase: What Is It & How to Use 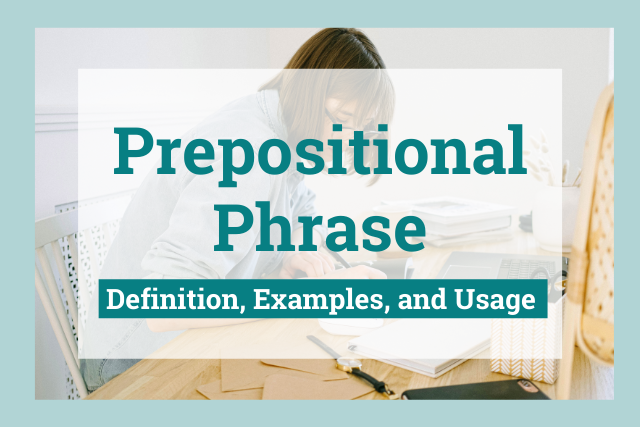 If you want to improve your writing and grammar skills, you’ll need to understand the concept of prepositional phrases.

What is a prepositional phrase, and what purpose does it serve?

This article will give you a detailed guide to prepositional phrases and teach you how to identify them in a sentence.

What Is a Prepositional Phrase?

Let’s take a closer look at what prepositional phrases are and how to use them.

The Merriam-Webster Dictionary defines a prepositional phrase as a phrase that begins with a preposition and ends in a noun, pronoun, or noun phrase. 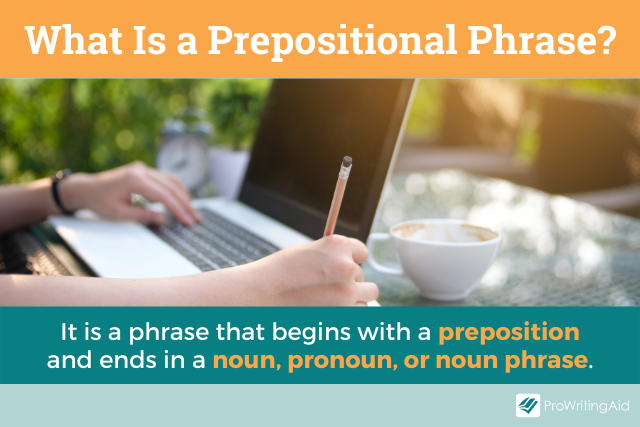 How to Identify Prepositional Phrases

You can identify a prepositional phrase by looking for the preposition and then figuring out what object that preposition attaches itself to.

For example, take the sentence “George rode his bike to the library.”

This prepositional phrase gives more information about the action performed in the sentence, which is “George rode his bike.” 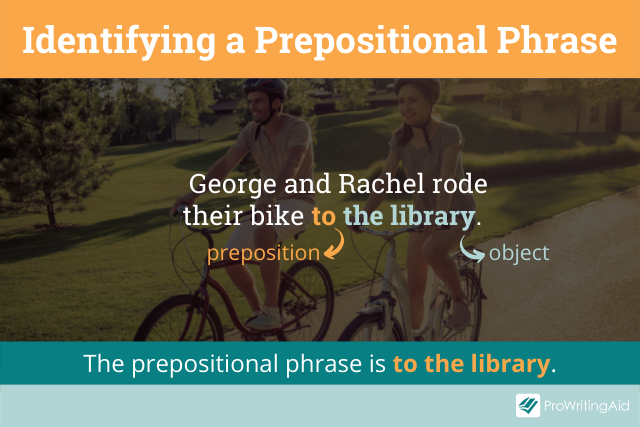 Here are some other prepositional phrase examples:

Can you identify the prepositional phrases in the following sentences?

As we mentioned earlier, the best way to identify a prepositional phrase is by looking for the preposition. But what exactly does that mean?

Essentially, a preposition is a part of speech used to show the relationship between a noun and another part of the sentence.

Prepositions are commonly used to give information related to direction, time, and place.

Let’s look at some common prepositions in each of these categories. 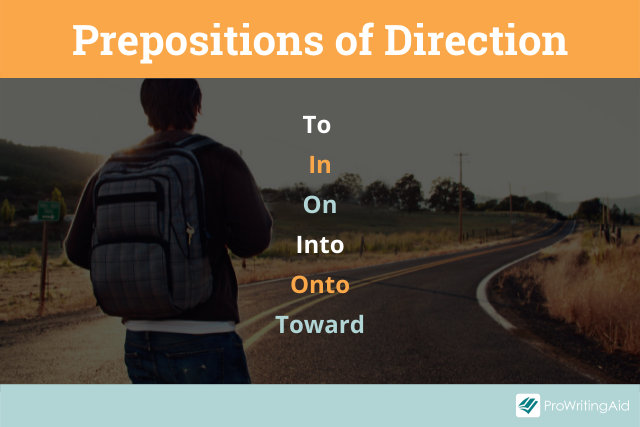 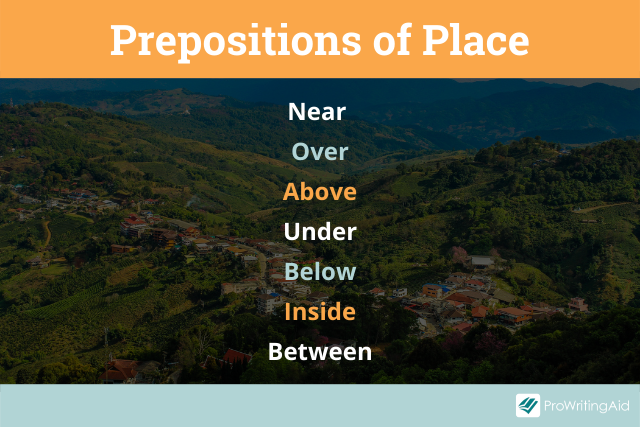 There are also plenty of prepositions outside of the three categories we’ve talked about.

We often use prepositions to convey information about similarity, method, relationships, and all sorts of other information.

Here are some examples of prepositional phrases that fall into categories outside the ones we’ve discussed so far:

There are also complex prepositions that involve more than one word, such as “in front of,” “according to,” and “in addition to.”

In these cases, the prepositional phrase includes every word within the complex preposition.

Here are some examples of prepositional phrases that include complex prepositions:

What Kinds of Objects Are Used in Prepositional Phrases?

The object of a prepositional phrase can be a noun, a gerund, or a clause. 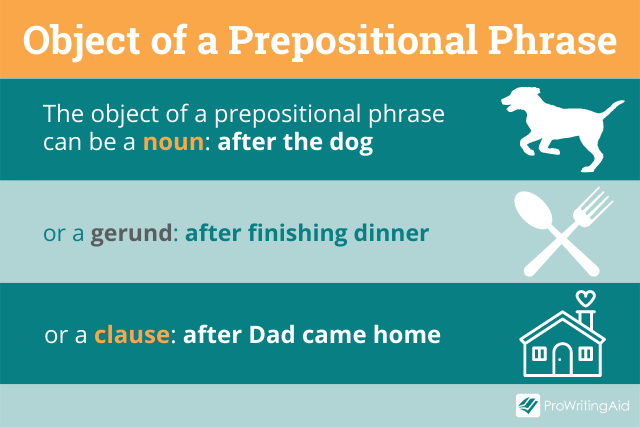 Let’s look at an example of each type of object using the preposition “after.”

Objects That Are Nouns

A noun is a word that identifies a person, place, or thing.

Consider this example: “The cat chased after the dog.”

Here, the object attached to the preposition (“after”) is a noun (“the dog”).

Objects That Are Gerunds

A gerund is a grammatical unit that’s derived from a verb.

Consider this example: “After finishing dinner, please put your plate in the dishwasher.”

Here, the object attached to the preposition (“after”) is a gerund (“finishing dinner”).

Use ProWritingAid’s sentence structure check to make sure that your sentences are varied enough to engage your reader.

Objects That Are Clauses

A clause is a grammatical unit that includes both a subject and a predicate.

Consider this example: “We went to the movie theater after Dad came home.”

Here, the object attached to the preposition (“after”) is a clause (“Dad came home”). In this case, the subject is “Dad” and the predicate is “came home.”

What’s the Purpose of a Prepositional Phrase?

Prepositional phrases can serve three purposes in a sentence. They can act as an adjective, as an adverb, or as a noun.

Adjectival phrases are phrases that modify nouns. When a prepositional phrase modifies a noun in the sentence, it serves the same purpose as an adjectival phrase.

For example, consider this sentence: “The house across the street has a beautiful garden.”

Here, the prepositional phrase “across the street” functions as an adjectival phrase because it gives more information about the noun “the house”. 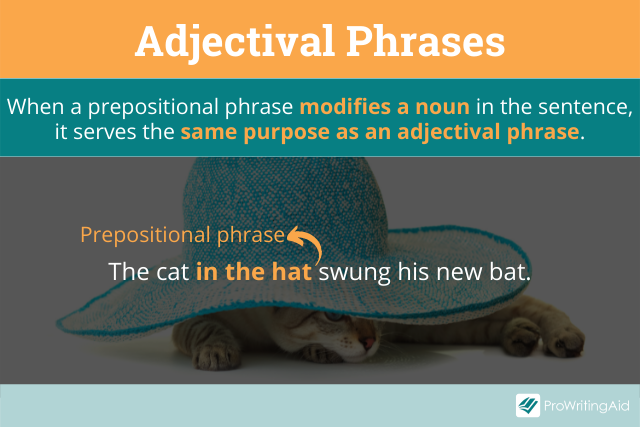 Here are some other examples of prepositional phrases that act as adjectival phrases:

Adverbs modify verbs. When a prepositional phrase modifies a verb, it functions as an adverbial phrase within the sentence.

For example, consider the sentence: “We ran away from the monster.”

Here, the prepositional phrase “from the monster” functions as an adverbial phrase because it gives more information about the verb “ran”. 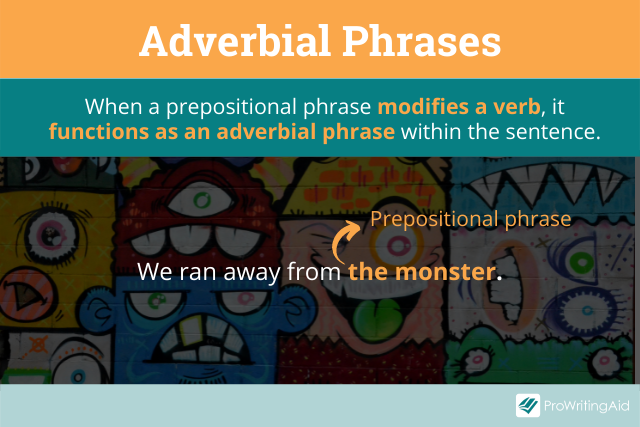 Here are some other examples of prepositional phrases that act as adverbial phrases:

Prepositional Phrases That Function as Nouns

For example, consider this sentence: “Below the oak tree is where you’ll find the hidden treasure.”

Here, the prepositional phrase “below the oak tree” functions as the subject of the sentence. 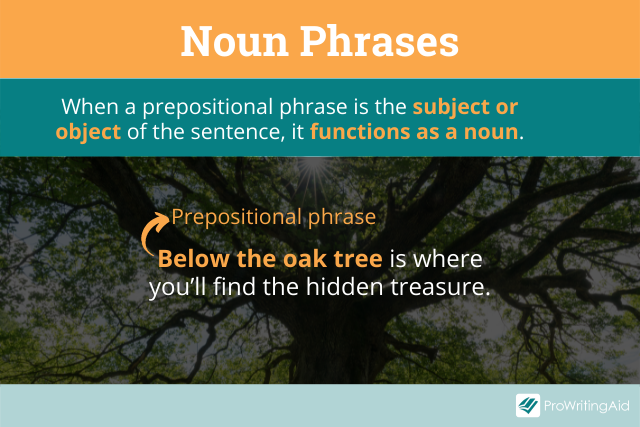 Here are some other examples of prepositional phrases that act as nouns:

Here are some examples of prepositional phrases from English literature.

“It was only two months since graduation, but already Brakebills seemed like a lifetime ago.”—The Magicians by Lev Grossman

“The soul might be within the eyes, but the subconscious, the matter of their behavior, that is in the hands. Watch a man’s hands, and you watch his heart.”—City of Stairs by Robert Jackson Bennett

“The worse the service, the more Theo tended to tip. He supposed it was a character weakness. He thought of himself as a person made almost entirely out of weaknesses rather than strengths.”—Case Histories by Kate Atkinson

“We’re like a pair of bad trapeze artists, reaching for each other’s hands and missing every time.”—Calypso by David Sedaris

“Somehow, the rapid flicker of her mood shone right through her face—she carried her own personal weather, as subtly shifting as a sea sky.”—The Very Thought of You by Rosie Alison

“A contortionist in a sparkling black costume twists on a platform nearby, bending her body into impossible shapes.” —The Night Circus by Erin Morgenstern

“The house was very still. Far off there was a sound which might have been beating surf or cars zooming along a highway, or wind in pine trees.”—Farewell, My Lovely by Raymond Chandler

“The sun had slipped behind a mountain, and the light had fallen flat. The branches were bare, the grass yellowed gray. Not a single snowflake. It was as if everything fine and glittering had been ground from the world and swept away as dust.”—The Snow Child by Eowyn Ivey

“Large tears rolled down her cheeks, but Sasha felt neither sadness nor despair, nor any emotions whatsoever—as if her tears came out of an open faucet.”—Vita Nostra by Marina and Sergey Dyachenko

“Silence has infinite flavors, with endless shadows and notes. The sharpest of all the silences, and the most necessary to know, is the silence before an attack.”—Black Wings Beating by Alex London

“He angles his head against the window and watches the autumnal landscape pass: the spewing pink and purple waters of a dye mill, electrical power stations, a big ball-shaped water tank covered with rust.”—The Namesake by Jhumpa Lahiri

“I have been birds and branches. I have been bees and wolves. I have been ether flooding the void between stars, tangling their breath into networks of song. I have been fish and plankton and humus, and all these have been me.”—This Is How You Lose the Time War by Amal El-Mohtar and Max Gladstone

“All her life, she had learned that passion, like fire, was a dangerous thing. It so easily went out of control. It scaled walls and jumped over trenches. Sparks leapt like fleas and spread as rapidly; a breeze could carry embers for miles.”—Little Fires Everywhere by Celeste Ng

“I remembered the lesson I’d learned as a child: it isn’t pain or suffering that unmakes a person; it’s only time. Time, sitting on your breastbone like a black-scaled dragon, minutes clicking like claws across the floor, hours gliding past on sulfurous wings.”—The Ten Thousand Doors of January by Alix E. Harrow

“Marian was the confirmed beauty: big blue eyes, tiny nose, perfect pointy chin. My features changed by the day, as if clouds floated above me casting flattering or sickly shadows on my face.”—Sharp Objects by Gillian Flynn

“As proud parents sat open-mouthed on the surrounding benches, she came hurtling out of the back annex, along the corridor, through the connecting door, into the hall, up to the springboard and into space. She drove me into the floor like a tack.”—Unreliable Memoirs by Clive James

“An old scar under his right eye stretched three inches to his jaw.”—The Boneless Mercies by April Genevieve Tucholke

“Next morning early I started afoot for Walden, out Main Street and down Thoreau, past the depot and the Minuteman Chevrolet Company.”—Walden by E.B. White

“The bond that binds us is beyond choice. We are brothers.”—The Dispossessed by Ursula K. LeGuin

“Would you kindly not air accusations of murder in the dining room?”—How to Stop Time by Matt Haig

There you have it: a complete guide to prepositional phrases and how to identify them.

Do you have any favorite prepositional phrases? Let us know in the comments.

Common Questions about Prepositional Phrase: What Is It & How to Use