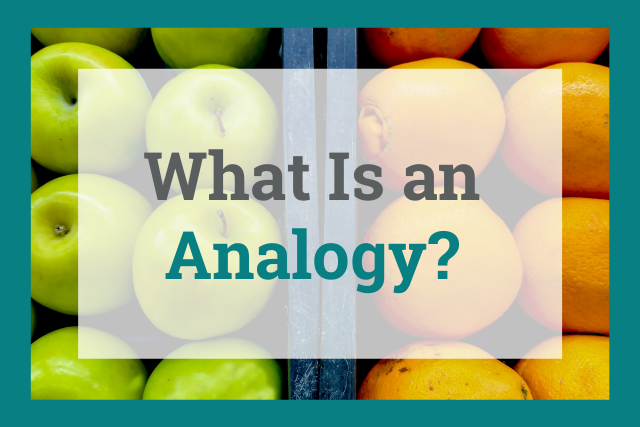 Analogy is one of the most common types of literary devices. It's also one of the hardest to understand because it's similar to other types of figurative language. Today, we're going to dive into the meaning of analogy with in-depth explanations and examples. 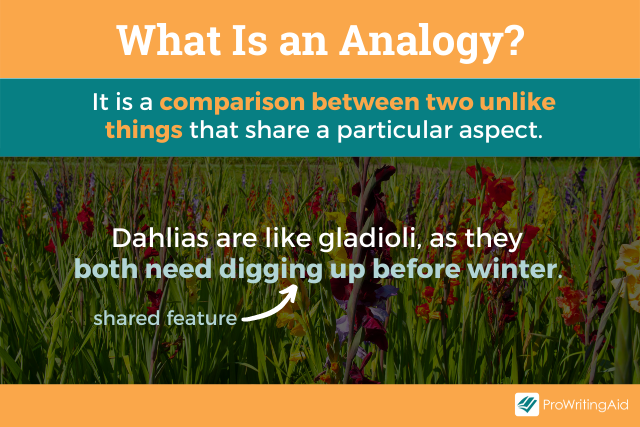 Analogy Definition: What Is an Analogy?

Let's start with the dictionary definition of an analogy. According to Merriam-Webster, an analogy is "a comparison of two otherwise unlike things based on a resemblance of a particular aspect."

We use analogies all the time in speaking and fields like history and science. They help us illustrate a point that might be hard to comprehend. For example, we might make an analogy between the Trail of Tears of U.S. History and the Jewish Diaspora of World History. In biology, you might discuss the analogous relationship of bat wings and bird wings.

As a literary device, however, analogy's meaning has more nuance that separates it from other types of rhetorical devices. Let's look at the literary meaning of analogy in more detail in the next section. 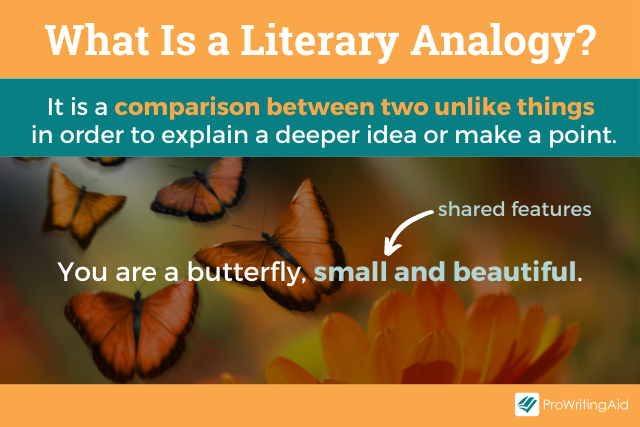 As a rhetorical device, analogy compares two unlike things with the purpose of both illustrating a comparison and explaining it. You aren't just trying to show a similarity when you use an analogy. You are also trying to make a point about this similarity.

Analogies can be useful to explain complex concepts by comparing them to a familiar idea. Analogies also help paint a picture in a reader's mind and add emphasis to important ideas in writing.

Let's take a look at a popular example of an analogy from the movie Forrest Gump. In the movie, Forrest says that his mother always told him, "Life is like a box of chocolates—you never know what you're gonna get."

If Forrest just said that life was like a box of chocolates, we would wonder what the similarity is. What point is he trying to get across? It might be that life is sweet or that life is a gift from someone who loves you. But then he explains that we never know where life will take us or what circumstances we will fall into. We don't know until we get there; we can't see the future.

He's not just painting a picture about life. He's making a point about the uncertainty of life and the many twists and turns it takes. This analogy goes further and illustrates the entire premise of the film. Forrest goes from being a boy in leg braces to an international ping pong champion to a dad. No one could have predicted that!

Analogies look similar to other types of figurative language. So, what's the difference? 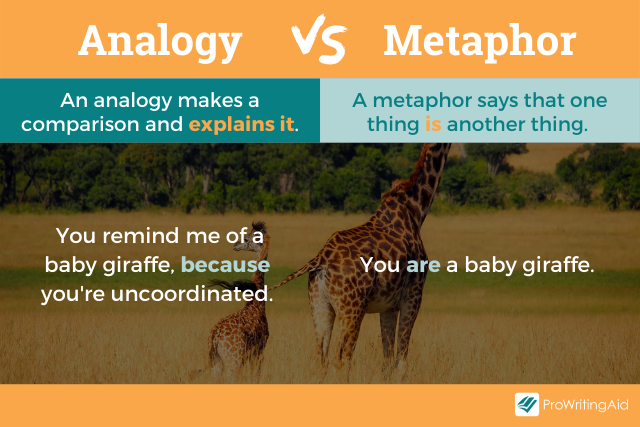 A metaphor is a figure of speech that shows a likeness between two otherwise different things. The point of a metaphor is comparison. For example, we can say, "the kids were a bunch of monkeys today." We are comparing kids to monkeys.

As you can see, an analogy might feature a metaphor, but it goes further in making a point. This is also different from an extended metaphor. An extended metaphor continues to use a comparison to illustrate similarities of two objects. An analogy requires some explicit explanation to make its point. 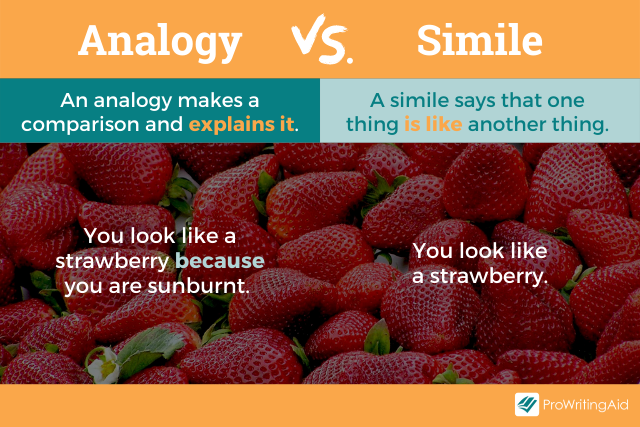 A simile is a type of metaphor, but it uses "like" or "as" to draw comparisons. Just like with a metaphor, an analogy might use a simile to compare two things, but then the analogy goes on to explain the idea behind it.

Many analogies use similes and metaphors to make comparisons, but it is not required. 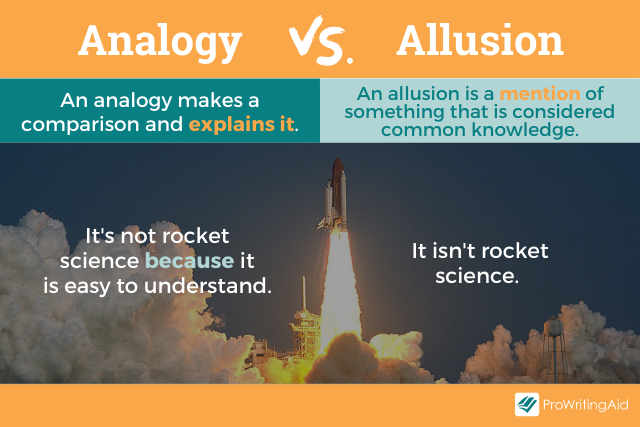 Another figurative language element that is easy to confuse with analogy is allusion.

Allusion is a mention of a person, place, or thing that is considered common knowledge. It's often a reference to a famous person or event or a well-known story, like fairy tales, myths, or religious parables.

Allusion is a way to compare two things. Let's look at an example:

Forbidden fruit refers to the fruit of the Tree of Knowledge in the Bible. This is an allusion. We can draw enough conclusions from this allusion to understand what the books represent.

Allusions can be part of analogies, too. Remember, where allusions compare, analogies explain:

All of these are useful types of figurative language. The difference lies in the purpose. If the goal is to explain an idea or get a specific point across, it's an analogy.

Sometimes analogies become so well-known that they become part of our everyday lexicon. Idioms are phrases that don't make sense literally, but they do make sense figuratively. Overused idioms can become clichés.

An example of an analogy that is a cliché is "she's as blind as a bat." It's a very overused comparison. Use ProWritingAid's Clichés Report to help identify the clichés and idioms in your writing. While some common analogies might help you get your point across, some can actually hinder your writing's clarity, especially to non-native speakers.

Try the Cliché Report with a free ProWritingAid account.

Examples of Analogy in a Sentence

Humans love figurative language, and we create analogies in our everyday speech. Here are some examples.

Can you create any analogies?

Examples of Analogy in Literature

Analogy is a powerful rhetorical device. Here are some famous examples of analogy in literature:

Tips on How to Write an Analogy 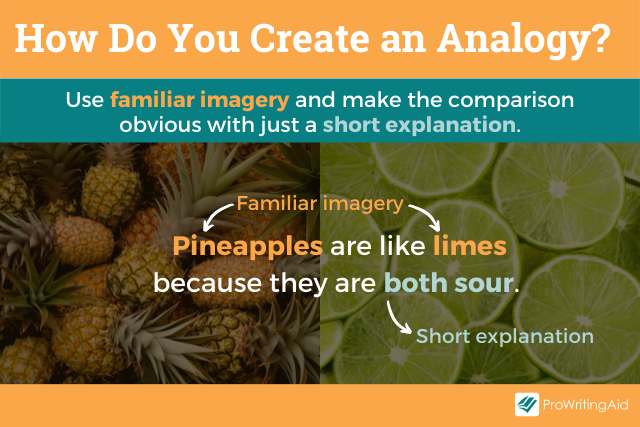 When you're writing an analogy to express an idea, it's important to keep two things in mind. First, make sure that at least one of the two things you're comparing is familiar and easy to understand. An analogy should make your point clear to the reader, not leave them confused! Animal or nature imagery, allusions to well-known tales, and everyday objects are good things to use in your analogies.

Secondly, make sure that your comparison is clear without much explanation. If you compare a shy, demure princess to a tiger, you need to explain what specific aspects of the princess and the tiger are similar. Is she ferocious when her loved ones are attacked? Does she prefer to spend time alone outdoors and seethe when caged?

If it takes too many sentences to explain the analogy, try using different imagery that is simpler to understand.

There are two main types of analogy. These are based on how closely related the two things being compared are. 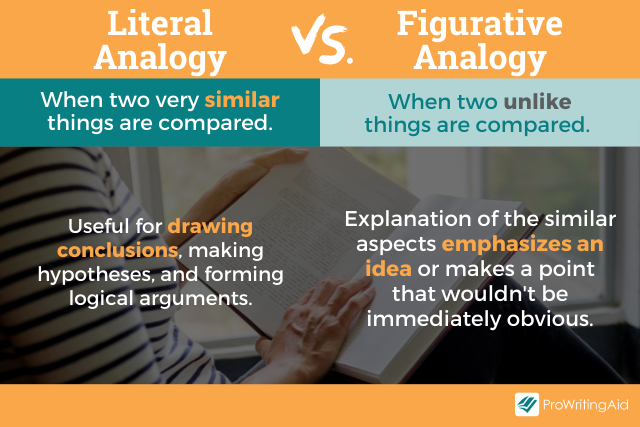 For example, a virologist might compare the viral structure of two different viruses. If the virus has a similar structure and similar symptoms to another, they are analogous. This will help them theorize that the second virus can be treated similarly to the first.

Literal analogies don't have to be just for science! If you're a baker, you might know that you can make a cheesecake out of either cream cheese or mascarpone. As an analogy, we can say that mascarpone is a lot like cream cheese. They both have high fat content, are very soft, and are not aged.

Literal analogies are the type you might see on standardized tests. They used to feature on the SAT and looked like this: A:B::C:D. You can read literal analogies as "A is to B as C is to D."

Standardized tests would have one or more of the words blank, and you had to determine the connection in the analogy. How are they connected?

A figurative analogy makes a comparison between two or more things that aren't necessarily that similar at first glance. The analogy focuses on making a comparison based on a specific aspect of the unrelated things. This is called shared abstraction.

Take a look at the following analogy:

If the Titanic is sinking, it's pointless to rearrange deck chairs. Likewise, this quote suggests spending money on little gifts is pointless because it's not addressing the real issues at hand that are causing employee dissatisfaction.

No one is suggesting that low morale at a company is the same thing as the hundreds of lives lost on the Titanic. The shared abstraction is doing something pointless in the face of a disaster.

Should You Use Analogies in Your Writing?

Analogies are powerful literary devices because they create an image in the reader's mind while making a point in a deeper way than a metaphor. Remember, an analogy compares two objects with the purpose of explaining a deeper idea. A literal analogy compares two very similar objects, while a figurative analogy relies on shared abstractions.