Blog Grammar Rules How to Use Subordinating Conjunctions

How to Use Subordinating Conjunctions 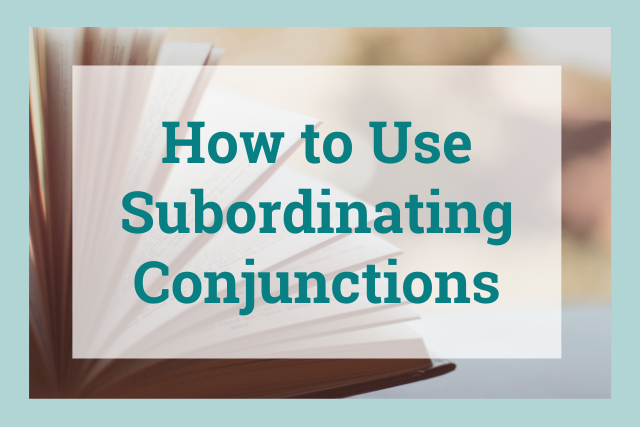 Most of us are familiar with conjunctions. These are words like and, but, and so that join other words, phrases, and clauses together. Simple, right?

Subordinating conjunctions play a similar role, just with more specific grammar rules that define when and how you can use them.

What Is a Subordinating Conjunction?

A subordinating conjunction is a word whose function is to join an independent clause with a subordinate clause.

Subordinating conjunctions do a few things: 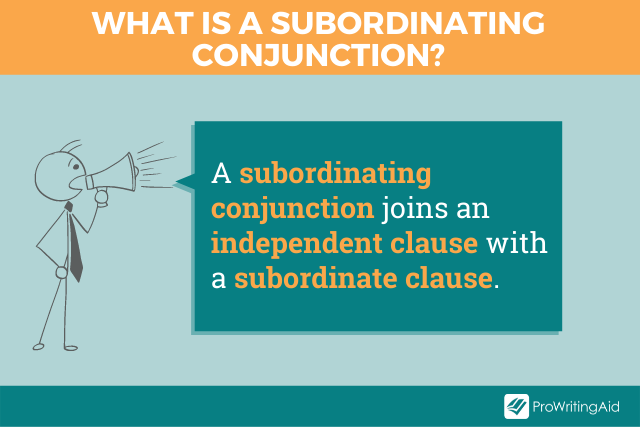 What’s the Difference Between Coordinating and Subordinating Conjunctions?

Coordinating conjunctions join phrases or clauses that are equal to each other, i.e. two independent clauses.

A subordinating conjunction joins unequal clauses, i.e. an independent and a dependent clause.

When you’re working out whether to use a coordinating or subordinating conjunction, split your sentence up into it’s main clauses. Here’s an example:

"I was a bit of a wild child" can stand on its own as a sentence, while "I was younger" cannot. The two clauses are unequal, so this sentence needs a subordinating conjunction.

In this example, both clauses can stand on their own. You need a coordinating conjunction.

Examples of coordinating conjunctions are:

Let’s look at one more coordinating conjunction in a sentence:

Notice how the phrases either side of "but" each contain complete thoughts—they are independent clauses.

Before we go any further, it might be a good idea to review what independent and dependent clauses are in a little more detail.

What Are Independent and Dependent Clauses?

A clause is a group of words that contains a subject and a verb.

An independent clause is a sentence all on its own. The reader doesn’t need any other information to understand what is happening in the sentence. 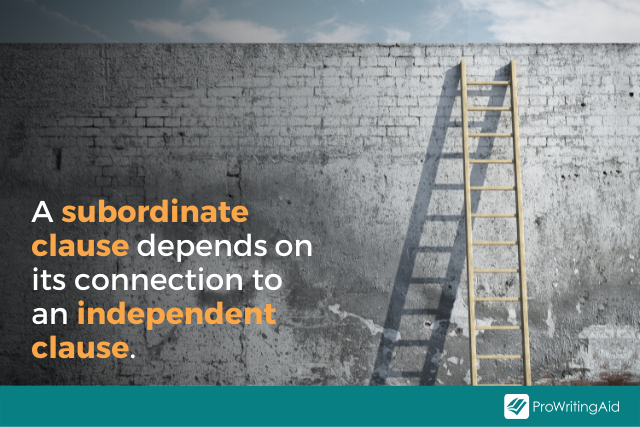 Here are some examples of independent clauses. The subjects are bold and verbs are underlined just for some added grammar review if you need it.

A dependent clause is also called a subordinate clause. It includes a subject and a verb, but it does not express a complete thought on its own.

It depends on its connection to an independent clause for that thought to be completed.

A dependent clause cannot stand on its own as a complete sentence. 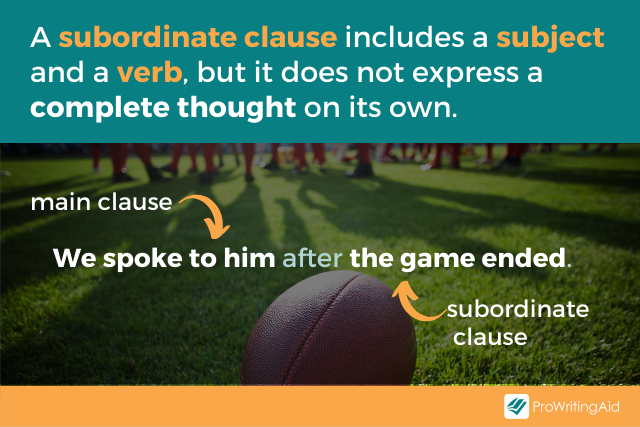 Why Can’t You Use a Dependent Clause on Its Own?

A dependent clause is a sentence fragment—not a complete sentence. Fragments are confusing to readers because they don’t provide complete information.

Now, look what happens if I try to pass that subordinate clause off as a sentence on its own:

What happened? Did the poor guy survive? We don’t know!

Even if we still include the next piece of information as a new sentence, that still won’t make the fragment grammatically correct:

You might say, “We just need to read the next part and the mystery is solved.”

True. But periods are full stops. When we read, we stop at periods—not forever—but they do indicate the end of the thought. Even when we keep going and read “The main character died” as the next sentence, the ideas don’t flow. They are not unified, and they need to be for that first clause to make sense.

Now that you know what a subordinate clause is, let’s return to the concept of subordinating conjunctions. 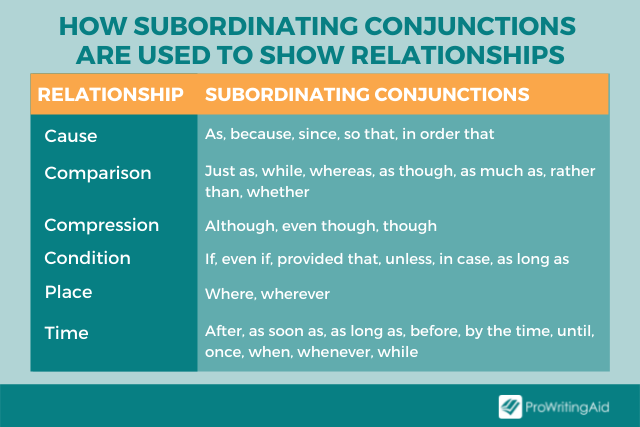 Some examples can fit into multiple categories, depending on the context of the sentence in which they are used.

How Do I Use Subordinating Conjunctions in Sentences?

To get a full understanding of what subordinating conjunctions are and how they work, it’s important to see them in action.

Check out these sentences and see if you can identify the relationship the subordinating conjunction is showing in the sentence.

And, since grammar isn’t everyone’s idea of a good time, I’ve added a challenge. All of the examples are from (or adapted from) song lyrics and poems. Can you identify the song, poem, or artist?

And here’s eight more ordinary, made-up examples so you can just concentrate on the subordinating conjunctions.

All of these examples are spoken by a parent or person in charge talking to their child or another young passenger. Do you see the metaphor for main and subordinate clauses?

The driver is in charge of making the car move and getting from point A to point B, just as an independent clause is responsible for providing a sentence that conveys a complete thought.

The passenger adds to the experience of that drive, but is not necessary for making the car arrive at its destination, just as a subordinate clause (introduced by its subordinating conjunction) adds to a sentence but isn’t what makes that sentence complete.

How to Order Independent and Dependent Clauses in Your Sentences

Most of the time, you can place either the independent or the dependent clause first in your sentence and it won’t change the meaning. It’s a matter of style, or preference.

However, it is good practice to vary your sentence structure to avoid sounding monotonous. You don’t want to start too many sentences with a subordinating conjunction, just as you wouldn’t want any of your sentence styles to be repetitive. 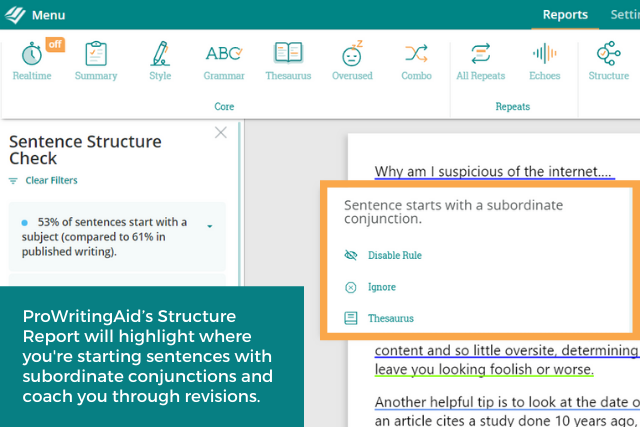 To keep your sentence structure varied, run your work through ProWritingAid’s Structure Report. If you’re starting too many sentences with subordinate conjunctions and clauses, this report will let you know and will coach you through revisions.

Upload your writing to our editor and try the Structure Report with a free ProWritingAid account.

What Punctuation Should You Use with Subordinate Conjunctions?

Take another look at those examples from before. Pay special attention to where the conjunction appears in its sentence, and to comma placement.

If this all sounds a bit difficult to remember, download ProWritingAid’s browser extension. It’ll tell you when you’ve missed a comma, or used one when you shouldn’t have. 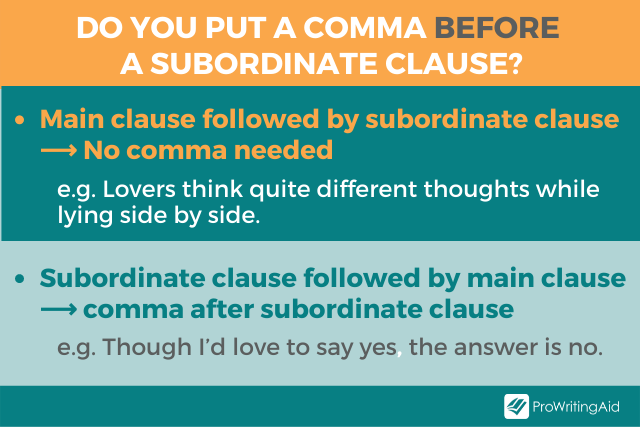 Understanding subordinating conjunctions and the role they play in sentence structures is key to producing grammatically correct writing. Here are the key summary points that you need to remember:

Grammar Rules
The Difference Between Opossum vs. Possum Is Not Just One Letter

Grammar Rules
E with an Accent: Learn How to Type É and Use It Correctly in Your Writing

Grammar Rules
Commonly Confused Words: How to Tell the Difference Between Principle & Principal