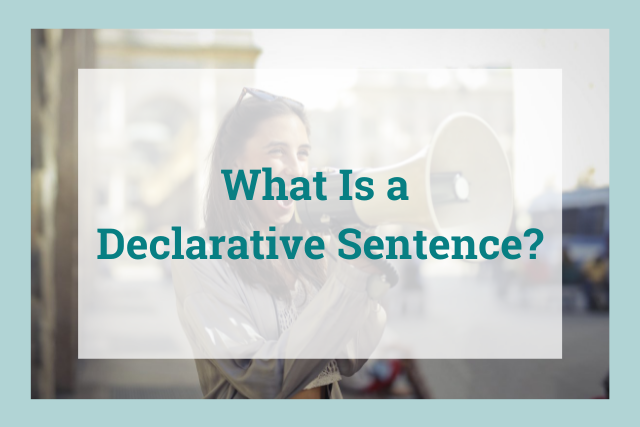 If you want to be a successful writer, you’ll need to understand how to use each one. The most common of the four is called a declarative sentence.

This article will explain what a declarative sentence is and provide you with examples from literature.

What Is a Declarative Sentence?

A sentence is declarative if it ends in a period and expresses a fact or opinion.

Here are some examples of declarative sentences:

Declarative sentences are one of four types of sentences.

The other three types of sentences are interrogative, exclamatory, and imperative sentences. 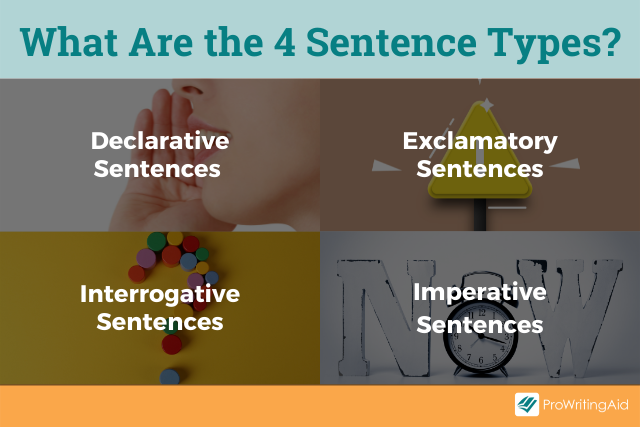 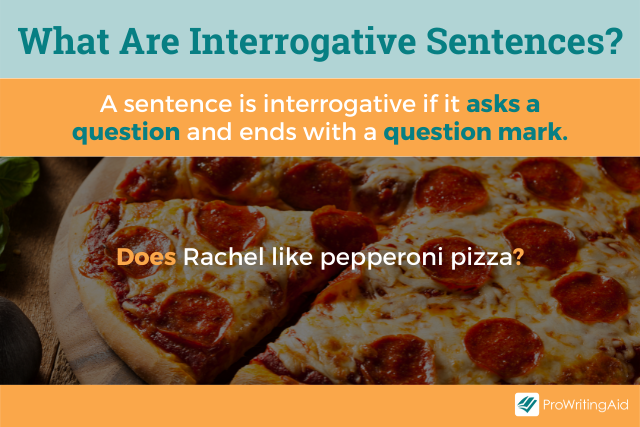 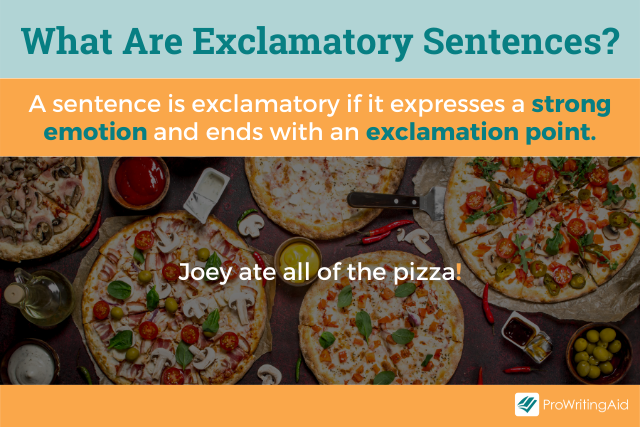 If a sentence asks a question, expresses a powerful emotion, or gives a command, you know it’s not a declarative sentence.

What Are Examples of Declarative Sentences in Literature?

Let’s take a look at some declarative sentence examples from successful books.

Notice how every sentence below ends in a period and states some kind of fact or opinion. They’re on all types of subjects, but they all declare something. 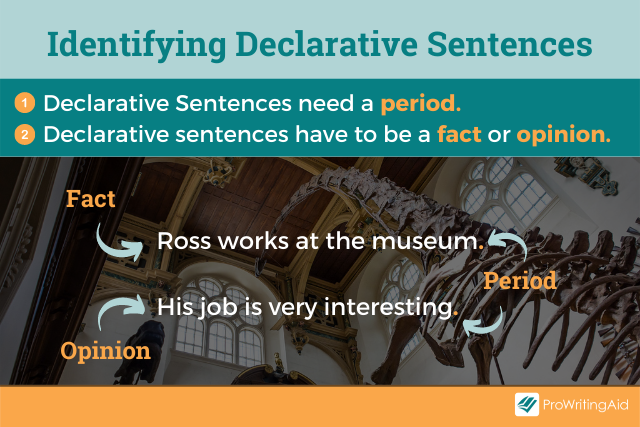 “Having faith in God did not mean sitting back and doing nothing. It meant believing that you would find success if you did your best honestly and energetically.”—The Pillars of the Earth by Ken Follett

“Truth matters. Truth has always been the thing I’m after, the most important thing. But sometimes, to get to the truth, detours through fiction are necessary.”—Magic for Liars by Sarah Gailey

“The house was very still. Far off there was a sound which might have been beating surf or cars zooming along a highway, or wind in pine trees. It was the sea, of course, breaking far down below. I sat there and listened to it and thought long, careful thoughts.”—Farewell, My Lovely by Raymond Chandler

“The woman’s name is Essun. She is forty-two years old. She’s like most women of the midlats: tall when she stands, straight-backed and long-necked, with hips that easily bore two children and breasts that easily fed them, and broad, limber hands.”—The Fifth Season by N.K. Jemisin

“With me as the glaring exception, my father molded the world around him to his liking. The problem, of course, was that Baba saw the world in black and white. And he got to decide what was black and what was white. You can’t love a person who lives that way without fearing him too.”—The Kite Runner by Khaled Hosseini

“Time was simple, is simple. We can divide it into simple parts, measure it, arrange dinner by it, drink whisky to its passage. We can mathematically deploy it, use it to express ideas about the observable universe, and yet if asked to explain it in simple language to a child—in simple language which is not deceit, of course—we are powerless. The most it ever seems we know how to do with time is to waste it.”—The First Fifteen Lives of Harry August by Catherine Webb

“Perhaps, as we say in America, I wanted to find myself. This is an interesting phrase, not current as far as I know in the language of any other people, which certainly does not mean what it says but betrays a nagging suspicion that something has been misplaced. I think now that if I had had any intimation that the self I was going to find would turn out to be only the same self from which I had spent so much time in flight, I would have stayed at home.”—Giovanni’s Room by James Baldwin

“There is an unprecedented gathering of illusionists in the lobby of the theater. A gaggle of pristine suits and strategically placed silk handkerchiefs. Some have trunks and capes, others carry birdcages or silver-topped canes. They do not speak to each other as they wait to be called in, one at a time, referenced not by name (given or stage) but by a number written on a small slip of paper given to them upon arrival.”—The Night Circus by Erin Morgenstern

How Do You Construct a Simple Declarative Sentence? 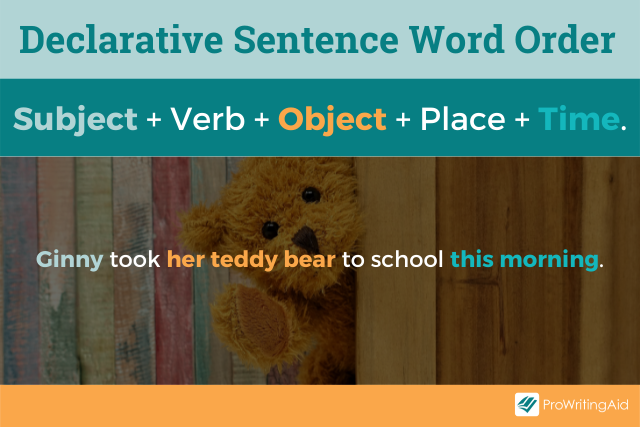 The subject and the verb are the two crucial components. The rest are optional.

Here are some declarative sentences with just a subject and verb:

You can add an object.

After that, you can add a place.

And finally, you can add a time as well.

How Do You Use a Declarative Sentence to Ask a Question?

Not all sentences that ask questions have to be interrogative sentences.

Sometimes, you can use a declarative sentence to ask a question indirectly.

Take this sentence, for example: “I wonder if my friend will pick me up after work.”

In this case, the sentence includes a question, but it’s an indirect question, because it’s framed within a declarative sentence.

That’s why it still needs to end with a period, not a question mark.

The interrogative version of the question above would be: “Will my friend pick me up after work?” Because this is an interrogative sentence, the “will” comes before “my friend.”

ProWritingAid’s Realtime Grammar checker can help you determine the difference between declarative sentences and interrogative sentences by suggesting punctuation changes if necessary.

As you can see in the example, this is an interrogative sentence and therefore requires a question mark to make sense. 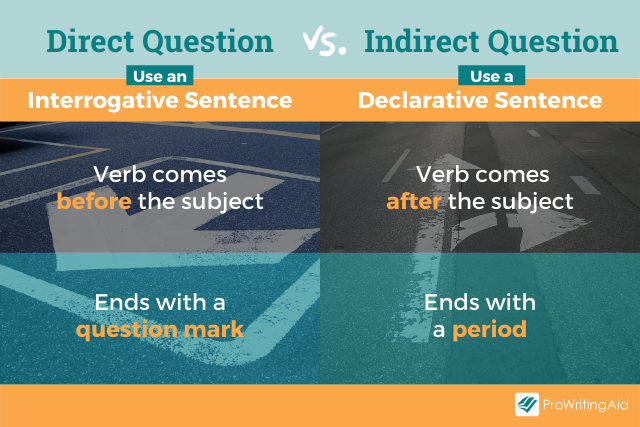 Now you know how to identify and construct declarative sentences.