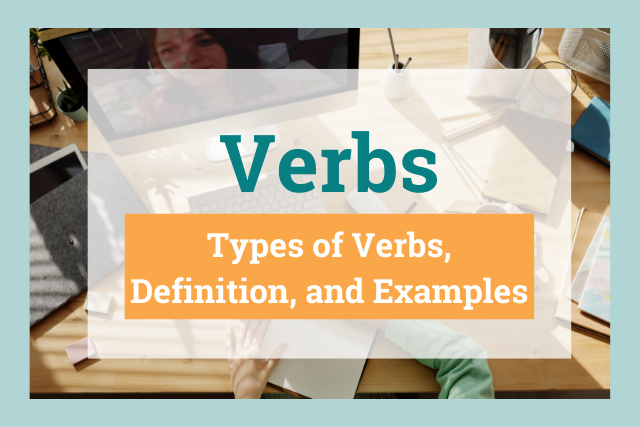 Think of all the actions you can perform. You can walk, run, and dance. You can speak, read, and write.

All of these are verbs—words that tell us what the subject of a sentence is doing.

Verbs are one of the most important parts of speech. In fact, they’re the only word that every complete sentence needs to include.

You can build a grammatically complete sentence without any nouns or adjectives, but no matter what, you need a verb.

If you want your writing to be clear and effective, you need to understand the different types of verbs and how they work.

This article will give you a complete guide to verbs to help you improve your writing.

What Is a Verb: A Simple Explanation

A verb is a word that denotes action or a state of being.

As a part of speech in grammar, a verb is the action in the sentence. Along with a noun, the verb is a critical component of a complete sentence. Somebody (noun) does something (verb). 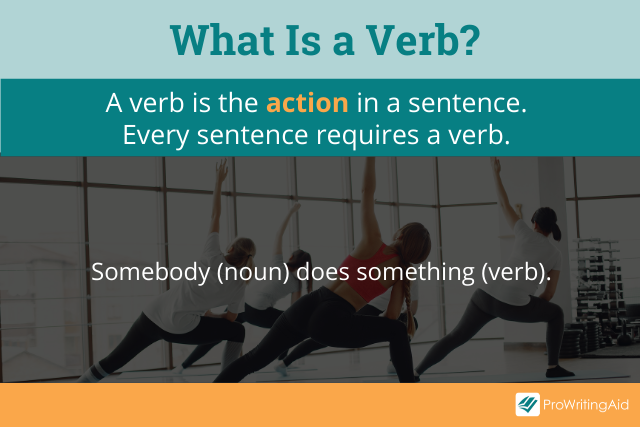 In grammar, the doer is the subject, and the action is the predicate (the part of the sentence containing the verb and describing the subject).

You may want more information in your sentence, like an object: “Jim grins at Sally.”

You may add subordinate clauses: “Jim grins at Sally when she fumbles the ball.”

However complex your sentence, the verb is the action. It tells you what the subject is doing, feeling, or being.

How to Use Verbs in Writing

You use verbs every day when you talk and write. Because verbs denote action, they move every story forward.

In writing, your verb choice delivers a punch to your prose.

Using the right verb also increases readability for your audience because you don’t need to lengthen the sentence by describing the action with extra modifiers. The verb does all the work.

Here are our three favorite tips for how to use verbs well in your writing. 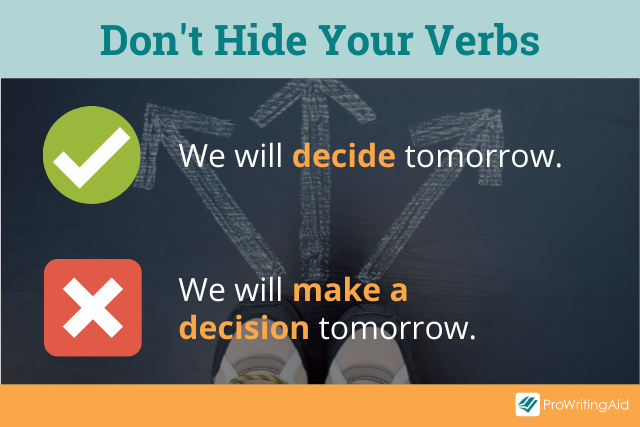 Many writers unintentionally hide their verbs by turning them into nouns accompanied by a weak verb.

The first sentence is shorter and more direct. In the second sentence, the strong verb decide is changed into the weaker make, which dilutes the meaning.

How can you spot hidden verbs? Look for words ending in -ment, -tion, -sion, and -ance.

Also, if you’ve used weak verbs like give, have, make, reach, and take, this could be a sign of a hidden verb.

Reading through your whole document to find weak verbs takes time. ProWritingAid automatically highlights your hidden verbs so you can change them with a single click. 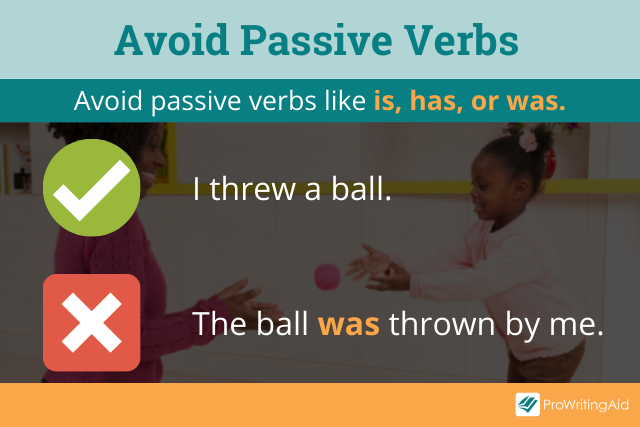 You could say “The ball was thrown by me” or “I threw the ball,” and both sentences mean the same thing.

However, it’s normally better to convey action and grab your reader’s attention, rather than using passive verbs like is, has, and was.

Rewording your sentences to favor active verbs instead of passive verbs will strengthen your writing.

For example, you can use a verb instead of an adjective:

The verb sleeps is more powerful than the passive version is asleep.

Similarly, you can use a verb instead of a noun:

Once again, the verb wrote is more powerful than the passive version was a writer, because it conveys movement and action.

Letting active verbs do the heavy lifting in your sentence will help you convey your point in a strong and concise way. 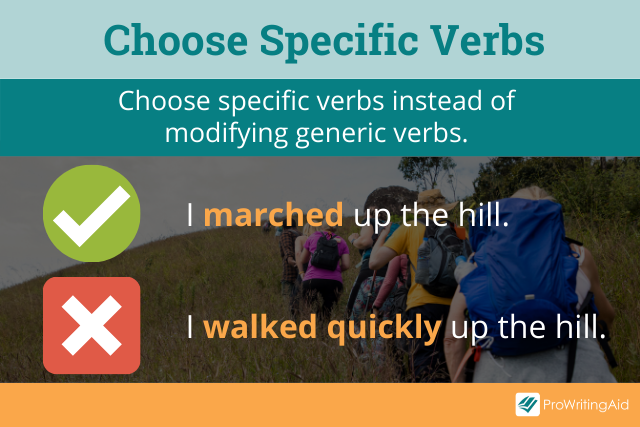 Some verbs in the English language are more descriptive and precise than others.

For example, the word whispered conveys more information than the word said, because it implies adverbs like quietly or furtively.

Similarly, the verb sprint conveys more information than move, because it tells the reader the specific type of movement being described.

There’s nothing wrong with using a generic verb like said, but if you want to provide more information, it’s almost always better to use a specific verb instead of modifying a weak verb.

Sometimes, this rule means replacing a generic verb and its adverb with a stronger, more specific verb. Consider the following example:

Original Sentence: She walked slowly up the stairs.

Improved Sentence: She trudged up the stairs.

Trudged is more concise and evocative than walked slowly.

Other times, this rule can also mean replacing a generic verb and a modifying phrase with a stronger verb.

Sneered is a more interesting way to say smiled in a mean way and will make your writing more powerful.

Keep in mind it's okay to use phrasal verbs, which are verbs that consist of multiple words, such as break down and let go.

There's a difference between using a phrasal verb and modifying a generic verb.

Choosing the right verb can help you say a lot more with fewer words.

There are three main types of verbs. Familiarity with verb types will help you understand when to use each type and when to avoid a verb type.

The three verb types are:

Let’s take a closer look at each of these verb types and how they function in a sentence.

When a person or thing is doing something, that’s an action verb.

Action verbs are the best ones to use in your writing to move your story forward and create tension. 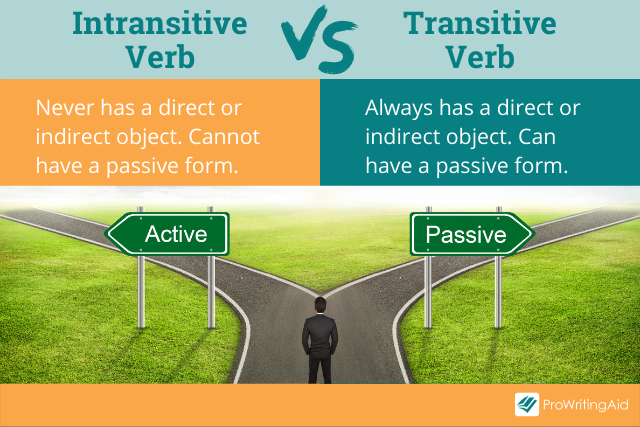 A transitive verb is always followed by a noun that receives the action, called the direct object.

Consider the sentence “I patted my dog’s head.”

The transitive verb is “patted,” and the noun that’s receiving this action is “my dog’s head,” which is the direct object of the action verb.

Sometimes an object can be indirect, such as when you’re expressing to whom the action is being done.

Consider the sentence “Mary gave Angelina a kiss on the cheek.”

The verb is “gave,” and the direct object was “a kiss.” To whom it happened was Angelina, the indirect object of the sentence.

Transitive verbs act on direct and indirect objects. Something or someone always gets affected by this type of verb.

The verb is runs, and the phrase “away quickly” tells us more about the verb, but there is no object in the sentence to receive the action. Therefore, runs is an intransitive verb.

An easy way to tell the difference between a transitive and an intransitive verb is to ask the question, “Who or what is receiving the action from this verb?”

Either way, transitive or intransitive, active verbs lend immediacy to your sentence, drawing in the reader.

An auxiliary verb, also called a helping verb, modifies the action in the main verb.

Auxiliary verbs provide hints related to the possibility of something happening (can, should, would, etc.) or time (has, did, was, etc.).

When you add auxiliary verbs to your sentence, you create verb phrases.

In addition, you can have auxiliary verbs comprising the forms of to be, to do, and to have.

Keep in mind that the following words can also serve as linking verbs (which we’ll discuss next):

Examples of be, do, have helping verbs in sentences: 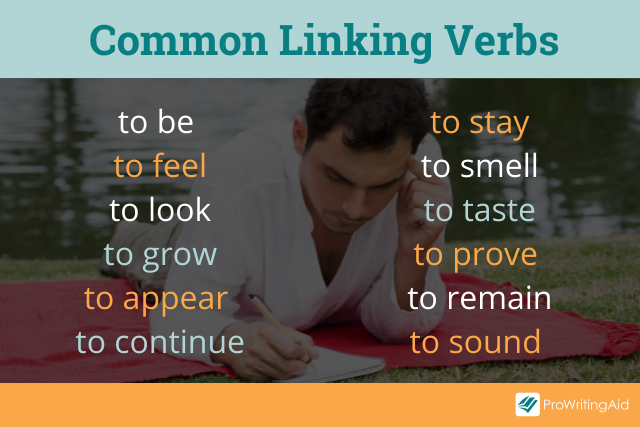 The most common linking verb can be found in the various forms of to be (am, are, is, was, were, etc.). These are also called stative verbs, because they describe a state of being.

To become and to seem are always linking verbs. The following verbs, however, can sometimes be linking verbs and other times be action verbs:

Here is an example of the difference between a linking verb and an action verb.

Linking: The seafood smelled off. (The linking verb smelled links seafood to off)

Action: I smelled the seafood before eating. (The action verb refers to the action of smelling)

Why Are Verbs Important?

Verbs are action words that engage your reader and help them picture what's happening in your writing.

Choosing the right verb can elicit an emotional response, whether you're writing academic essays or narrative fiction.

Academic writing tends to stick to more formal writing styles than fiction writing, but you still want to keep your reader’s interest and communicate your points clearly.

Whether you’re a student writing essays for class, or a professional researcher trying to publish a paper, using strong action verbs will improve your academic writing.

Look for weak verbs in your writing and try to replace them with precise and dynamic verbs.

Consider the following examples of verb choices in academic writing.

If you are new to thinking about verb use, here’s a list of 100 strong English verbs you can use to improve your essays, papers, and articles:

Fiction writers use verbs with exactitude to prompt reader engagement, thereby sparking emotions and a desire to keep reading.

Dull verbs make for lackluster reading. Finding the right verb for your character’s action brings your story to life.

You might have heard the classic writing advice “Show, don’t tell.” Using strong verbs is a great way to show the reader what’s happening clearly and concisely.

Consider the following examples of verb choice in fiction writing.

If you want a good starting point for stronger verbs to use, here’s a list of 100 strong verbs in English that you can use for fiction writing:

Using ProWritingAid to Strengthen Your Verbs

It’s easy to skip over weak verbs in your writing when you’re self-editing.

But, taking time to focus directly on your verbs helps ensure you’re always using the best word for your sentence.

ProWritingAid’s Thesaurus Report highlights all the verbs in your writing so you can get an overview of the strength and specificity of your word choices throughout your document.

Hover over a verb to see synonyms and click to replace weak verbs in your text with more powerful alternatives.

There you have it: our complete guide to verbs.

Here’s a quick recap of everything we’ve discussed.

Increase the power of your writing by following these three tips:

The three verb types are:

Whether you’re writing fiction or non-fiction, specific verbs spark emotions in your readers and keep them engrossed in your writing.

Common Questions about Verbs: Types of Verbs, Definition and Examples

Can I use a gerund after "allows"?

Which version of the verb should be used with "every"?

What verb form should you use after "consider" and "imagine"? Infinitive or gerund?

Do you need to include "started to" in a sentence?

Why should you not overuse words like "believe" and "think"?

Why is "do + VERB" not a great construct?

What is a split infinitive? And when should you avoid using one?

Why should you not overuse "knew"?

Why should you not overuse "feel"?

Why should you not overuse "could"?

Why shouldn't I write "start to" or "begin to"?

What are modal verbs? How do you use them?

Why should I use "went" instead of "decided to go"?

When can you omit "in order" in a sentence?

What is correct subject–verb agreement?

Do we need "manage to" in a sentence?

What form of verb should be used after "been" or "was"?

Should I use "conduct an interrogation of" or "interrogate" in my work?

When should you use "choose/decide" before an infinitive?

Should I use "demonstrate" or "show" in my work?

What form of verb should you use after modal verbs?

What forms should you use after "have"?

Watch out for hidden verbs in your writing—set them free! (video available)