ProWritingAid
ProWritingAid
The Grammar Guide Word Classes What is the difference between "weather" and "whether"?

What is the difference between "weather" and "whether"? 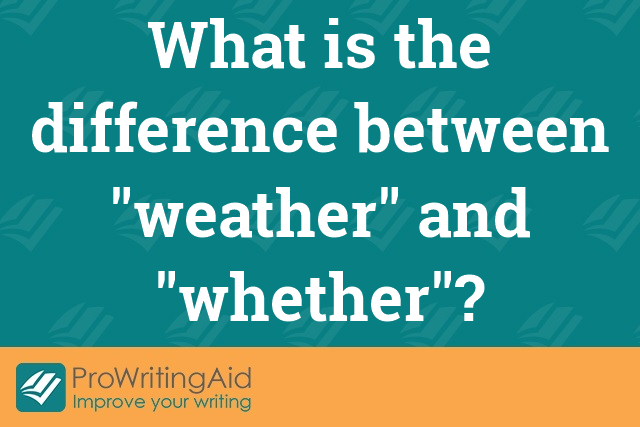 Weather and whether are homophones, which means they sound the same, but they have different spellings and different meanings. It’s easy to confuse these two words.

Weather is both a noun and a verb. As a noun, it refers to the state of the atmosphere outside. As a verb, it can mean to endure or to undergo change.

Whether is a conjunction used to introduce alternative situations. 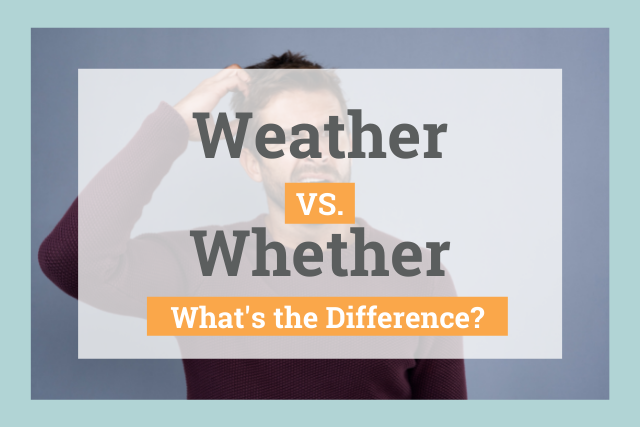 The words weather and whether are part of the “easily confused words” club. They are homophones: words that sound the same, but have different spellings and different meanings.

You’ve probably come across many homophones in your reading and writing life: affect and effect; accept and except; would and wood—it’s a long list.

While the club may be semi-exclusive, with some careful observation and thought, we can effectively change the name of it to the “not-so-difficult-to-unconfuse-words” club. Okay—so the name needs some work. But the club isn’t the point.

The point is, we can decode the meanings of weather and whether and use them correctly without too much difficulty. 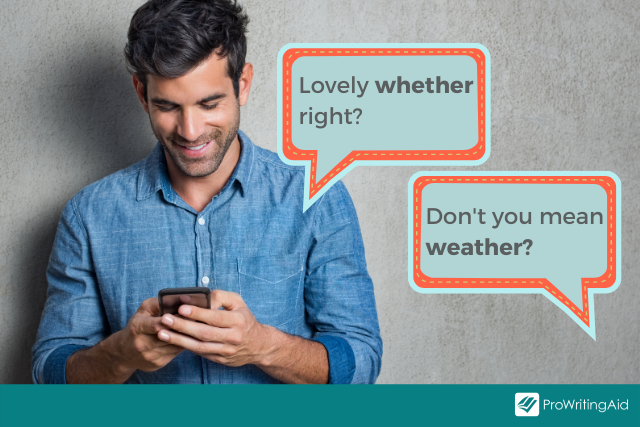 What’s the Difference Between Weather and Whether?

Weather and whether are different words. They don’t share any meanings and cannot be used interchangeably. Weather can be used as a noun or verb, while whether is a conjunction. Let’s dive deeper into each word’s meaning.

What Does Weather Mean?

Weather means different things depending on how it’s used: as a noun or as a verb.

Using Weather as a Noun

The noun weather is probably part of your everyday speech. You listen to weather reports on the news, talk about the weather, and on a temperate day, tell people to “enjoy the lovely weather.”

The noun weather refers to the atmospheric conditions. Temperature, winds, precipitation, clouds—all of those things are weather. 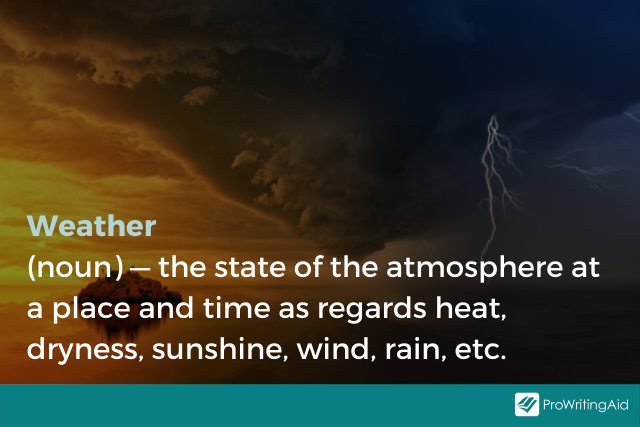 How Do You Use Weather in a Sentence as a Noun?

Usually, the word weather is paired with an adjective that tells what kind of weather. In the examples above, those adjectives are:

Sometimes, though, weather is used by itself, without an adjective. When that happens, the implication is that the weather conditions won’t be good.

Weather as a Verb

It’s not uncommon to use weather as verb, but this form isn’t as common as the noun weather.

As a verb, weather has several meanings: 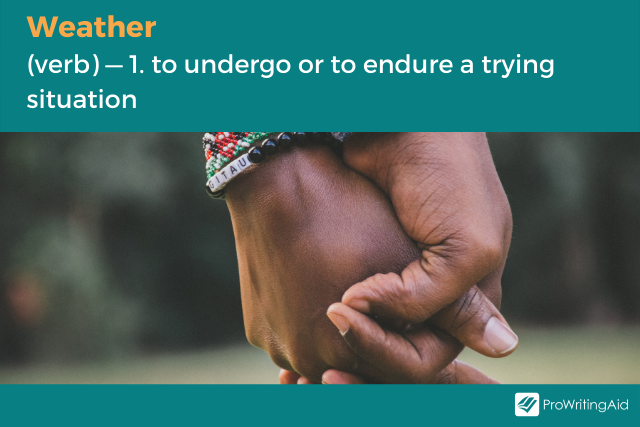 How Do You Use Weather in a Sentence as a Verb?

As you examine these examples, see if you can decide which verb definition of weather is used in the sentence. Also, notice how the form of the word changes depending on tense.

The word weather has its place in several common contexts and idioms.

Under the weather (not feeling well):

Fair-weather friend/fan (only stay for the good times):

Weather the storm (get through tough times): 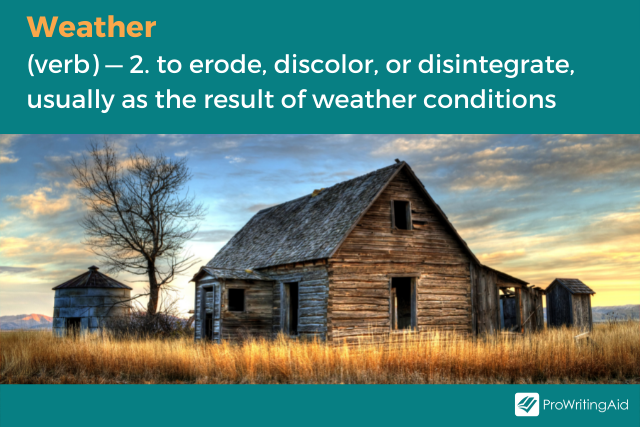 What Does Whether Mean?

The only thing whether has in common with any form of weather is its sound. It doesn’t represent any of the same parts of speech or meanings.

Whether is a conjunction, a word that joins two words, phrases, clauses, or sentences together. Its meaning is similar to that of if.

Here are some more specific meanings from Merriam-Webster:

Whether is often used as a correlative conjunction pair with or.

Correlative conjunctions are pairs of conjunctions like neither/nor, either/or, not only/but also, and whether/or. For example: 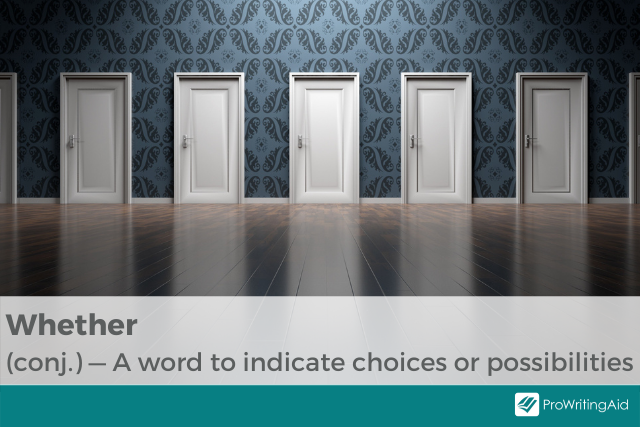 How Do You Use Whether in a Sentence?

Here are some examples of how to use whether in a sentence.

Is Wether the Same as Whether?

Yes—there is a third form: wether. It’s not a word the general public knows or uses much. It kind of looks like something’s missing from the word, doesn’t it?

That makes sense, actually, since a wether is a castrated sheep or goat. I hope my mnemonic device isn’t insensitive. But I’ll bet you won’t forget it. 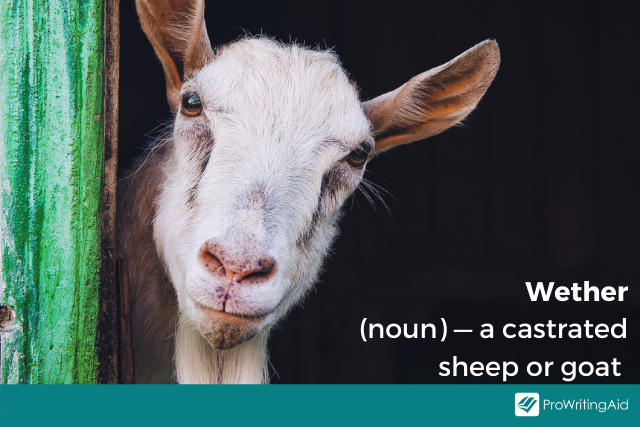 How Do You Remember the Difference Between Weather and Whether?

There’s no perfect “trick” for reminding you of the correct spelling. One suggestion is that weather includes the letters ea, like the word sea, and weather often affects the conditions of the sea. If that works for you, great.

You could use the two words in the same sentence to help remind you of their meanings:

But now that you know what each word means and does, you don’t really need tricks to win the battle of weather vs. whether.

Plus, you can always rely on ProWritingAid’s Homonym Report to alert you to commonly confused words and help you determine if you’ve selected the right one. Knowledge, and ProWritingAid, is power! 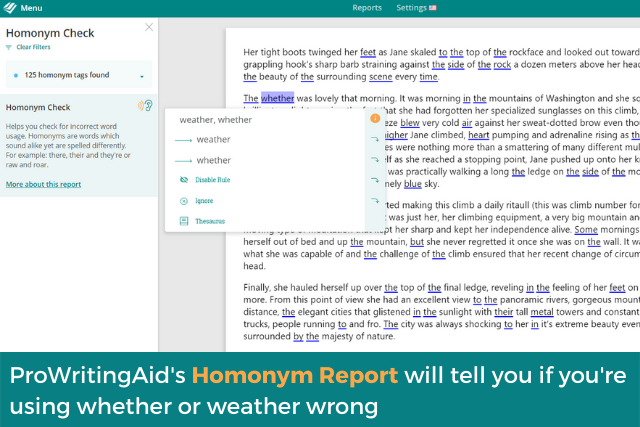 Try the Homonym Report with a free ProWritingAid account.

Word Classes
Should you use a comma before "while"?

Word Classes
Should I use spaces around an en-dash?

Word Classes
When do you need to use an em-dash?

Word Classes
Should I use spaces around an em-dash?

Word Classes
What's the difference between a coordinate adjective and a hierarchical adjective?

Word Classes
Should I use a comma between two adjectives?

Word Classes
Should I use a comma before and after vocative?