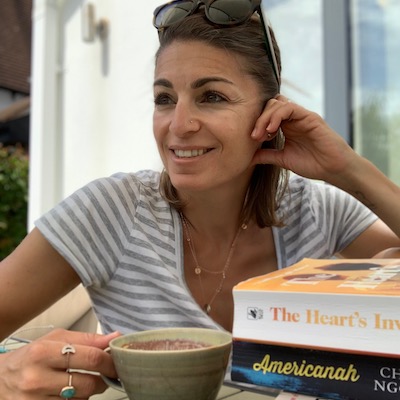 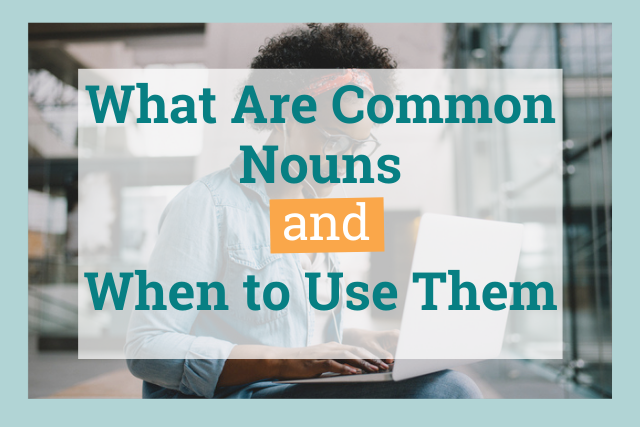 A common noun is a noun that may refer to a general or specific class or entity and can be used with limiting modifiers such as a, an, my, every, and some. A common noun is always written in lowercase.

The English language is full of confusing rules and exceptions to those rules so let’s scale it back for a moment to make this easier to understand.

What is a Noun?

The noun—one of the most essential elements of the English language—makes up the largest class of words in this and most other languages as well. It can refer to a thing, a person, an animal, a place, a quality, an idea, or an action. 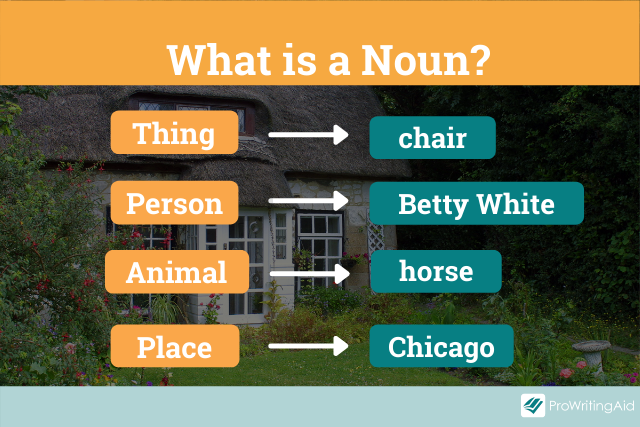 A noun is usually a single word (for example, book) but that's not always the case. Bathtub, fish cake, and swimming pool are also nouns. Specifically, they are compound nouns—they are made up of two or more nouns to form an altogether new one.

What is a Common Noun?

A common noun is just like a regular noun—it's still a person, place, thing, etc. But in this case it refers to a generic class of beings, places, or things. Generic here simply means that we don’t have any specific information on the precise nature of our noun. 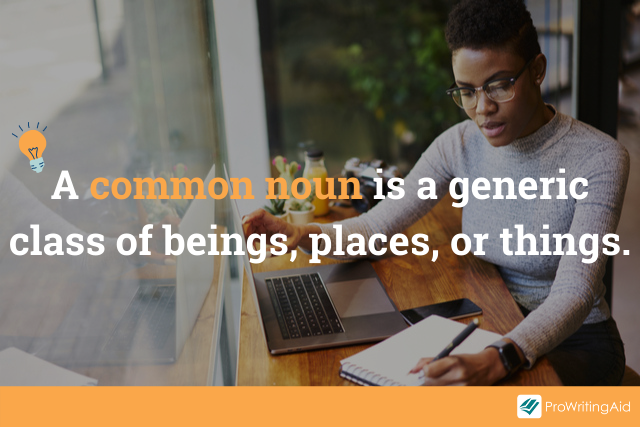 So, for example, the following are all common nouns: city, child, and book. If we used common nouns in a sentence, it would read something like this:

We have a complete sentence here with a subject (noun) performing an action (verb). But we don’t actually have a lot of detail. Who is the child? What city is she going to? Which book does she buy? This is where our proper nouns come in.

Here are 20 examples of common nouns:

What is a Proper Noun?

Unlike common nouns, proper nouns are a particular person, place, or thing. Proper nouns do not take a limiting modifier (a, an, every, some) and are usually capitalized. 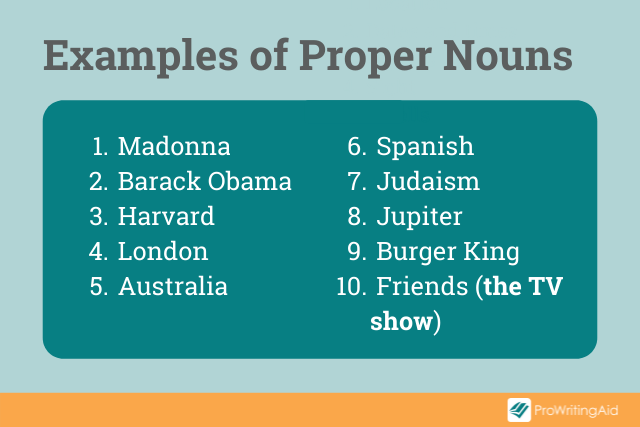 Remember our sample sentence from above? We didn’t get a lot of specifics with it.

In essence, we did not change the structure of the sentence. We simply replaced all of the common nouns with proper nouns. And there you have it, we now have specific details that give us a better picture of the action.

Also, note that all the proper nouns are capitalized while none of the common nouns were. 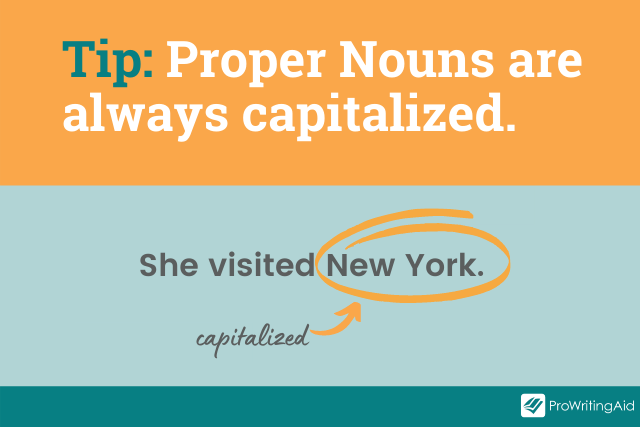 While common nouns provide us with general classifications only, proper nouns provide precise details. Each common noun will always have a counterpart, as we’ve just seen in the most recent example.

Child, city, and book were replaced with their specific proper nouns of Madeline, New York City, and Where the Wild Things Are.

So, to repeat, proper nouns can always be linked to a more generic common noun.

However, not all common nouns will necessarily have a proper noun to go with them (think of toe, hair, dust, dirt, etc.). 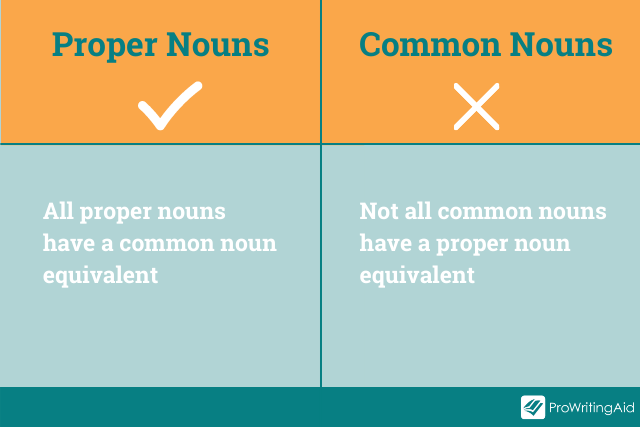 The main reason for distinguishing between common nouns and proper nouns is to help with classification and capitalization.

How to Spot a Common Noun

As pointed out at the start of this article, an easy way to spot common nouns is by working out whether we can use any limiting modifiers with them, such as a, an, my, every, or some and making sure it’s lowercase. For example:

In the first example, his can be replaced with a and the sentence still reads correctly, so "book" is a common noun.

In the second example, Hamlet is both capitalized and cannot be replaced by any of the modifiers (there's only the one Hamlet after all), so we know that this is a proper noun. 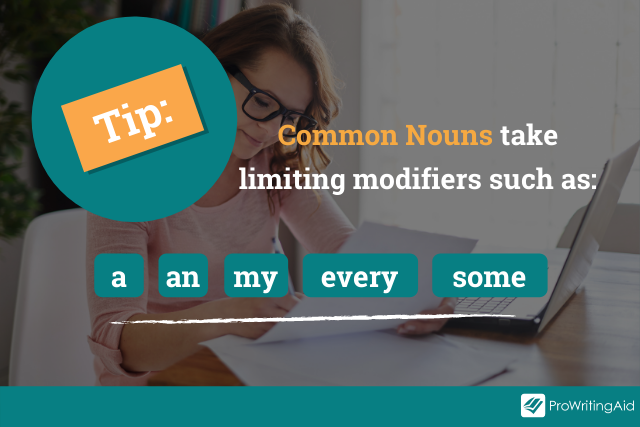 How to Spot a Proper Noun

Now this is relatively easy because proper nouns are almost always capitalized. For most of us it’s already second nature to capitalize names of companies, people, languages, countries, etc.

I say almost because, true to its tricky nature, English will always have an exception to confuse you. Sometimes you will find that certain proper nouns can be written in lowercase, such as mars (the planet, not the chocolate bar).

Technically, it is a specific planet—i.e. a proper noun—and should therefore be capitalized. But as its use is so ubiquitous in the English language, the lowercase spelling has become widely accepted.

Another example of this is champagne (the drink, not the region). Because it’s now such a familiar designation for most sparkling white wines, it is commonly accepted as lowercase.

In these instances it is often down to a particular house-style whether a specific proper noun needs to be capitalized or not. So check your style-guide before making a judgment call.

Why Do We Need Common Nouns?

Common nouns are used no differently in writing and speech than any other type of noun. They take the same grammatical positions and can thus be used as subjects and direct or indirect objects.

Take a look at these examples:

Book is the common noun used as the subject of the sentence.

Book is the common noun used as the direct object of the sentence.

Book is the common noun used as the indirect object of the sentence.

Using different types of nouns can help keep our writing varied, fresh, and more precise. Sometimes we want to be more specific, sometimes a little less.

Do you want to paint a vivid, precise picture for your readers? Use a proper noun. Are you interested in setting a more general scene without getting lost in details? Then perhaps a common noun is more appropriate.

The more types of nouns we use in our writing, the more engaging and interesting our text becomes.

A common mistake made when using common nouns is to capitalize them, especially when it comes to titles and professions. Words such as president, chancellor, or queen sound important, so people tend to capitalize them incorrectly. 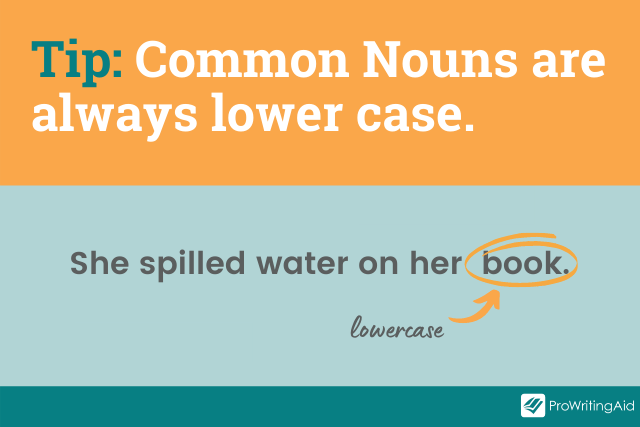 A simple way of avoiding that mistake is to look carefully at your noun. Is it specific? Is it talking about one particular person, thing, place, etc.? If not, then keep it lowercase.

Let’s look at some examples:

We are not talking about a specific president, such as Joe Biden, so “president”, despite its gravitas, remains lowercase.

If we wanted to capitalize the word “president”, we’d have to turn it into a proper noun. To do so, all we have to do is attach it to the name of the president. So, for example:

Let’s look at one more example to let it sink in.

Again, we have no specifics as to which queen we are talking about or where she might be staying. These are generic terms only, so we have to keep them lowercase. If we wanted to capitalize them, we’d have to turn them into proper nouns. For example:

Now we have specifics—we know which queen we’re talking about and the name of the specific castle.

If you find yourself using the same common nouns throughout your writing, the ProWritingAid Thesaurus check is a great tool to help you find the perfect words. Sign up for a free ProWriting Aid account today and see for yourself. 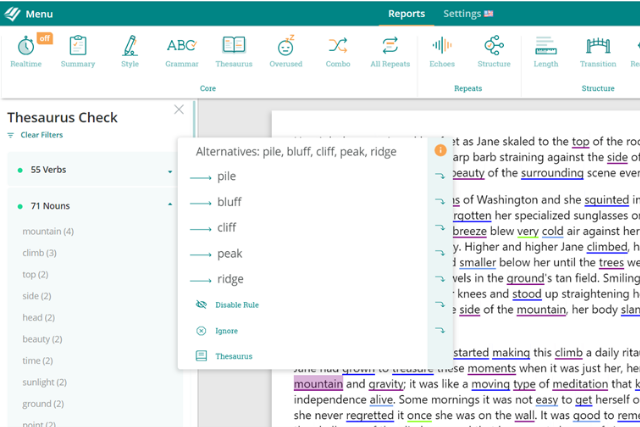 Now it's time to practice what you've learned. Let’s look at the examples below. Highlight all instances of common nouns and underline the proper nouns.

Common nouns are generic (think non-specific) people, places, things, ideas, animals, actions, or qualities. Use them to create a general scene without going into details.

They're always lowercase and function just like any other type of noun in your writing.

Jennifer has always been a lover of languages and words. She’s bilingual in English and German and fluent in French. She has degrees in Journalism and French and a PhD in literature. When she’s not editing or writing for a living, she’s reading and reviewing books for fun (@jens.book.nook).

wendygoerl
"Sun" and "moon" are common, not proper, nouns. A sun is the star that a planet orbits. A moon is a celestial body that orbits a planet. The Earth's sun is Sol, and our moon is Luna. It is possible for some stellar ("Solar" system IS a proper noun, it is "the stellar system of Sol") systems to have more than one sun. Mars has two moons.

millie.dinsdale
Thank you for pointing this out! We will take a look and update this :)

Grammar Rules
Abbreviation for With and Without: What Is It?

Grammar Rules
Do You Need a Comma Before "Such As"?

Grammar Rules
Comma Before Which, Where, and Who: When to Use It (with Examples)