The Grammar Guide Spelling What's the difference between "its" and "it's"?

What's the difference between "its" and "it's"?

It's vs its is one of the most common English grammar mistakes made.

Its (no apostrophe) is the possessive form of the pronoun it. Most possessives use an 's, which is probably the reason that many people find this confusing.

It's (with apostrophe) is the shortened form of it is. This contraction is the reason why the possessive form lost its apostrophe. 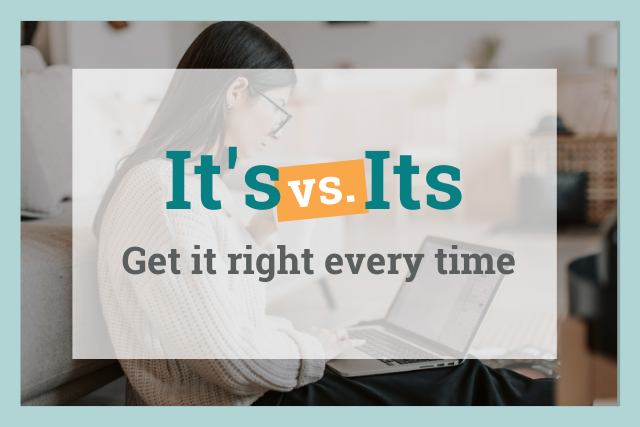 It’s one of the most common grammatical errors. It’s a spelling mistake that teachers have to correct every day. It’s also incredibly easy to get right and once you learn the rules, you will never make a mistake again. It is, of course, “it’s” vs “its.”

What Is the Difference Between It's and Its?

“It’s” with an apostrophe is simply a contraction of “it is” or “it has.”

“Its” without an apostrophe is not a contraction but a possessive pronoun like “his” or “hers.” Thus “he rubbed his nose,” “she rubbed her nose” and “the puppy rubbed its nose."

Here’s the golden rule: If “it is” or “it has” can replace the “it’s” in the sentence, then you can use an apostrophe. If not, no apostrophe! That’s all you need to remember. It’s that simple. 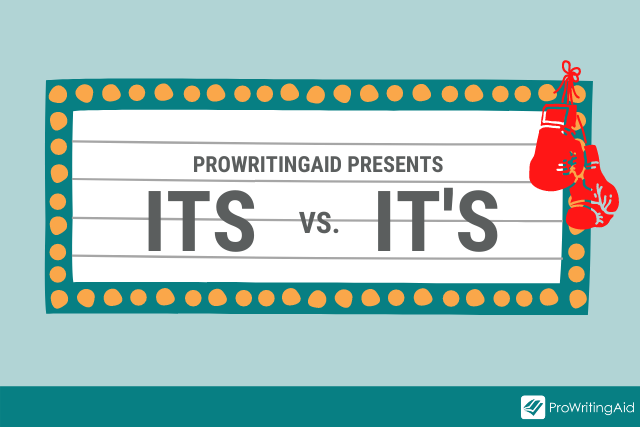 You should look for errors like it's vs its at the copyediting stage. Check out our free ebook on all things editing to learn more about the process.

It's vs Its: Why Do People Get it Wrong?

So, if the golden rule is so simple, why do people still get confused?

Probably because from time to time we all find ourselves staring at a word and wondering if it looks right, even when we know it is.

“Its” can do that to you. It’s one of those words. And here’s the reason.

Indeed, the most common mistake in the use of “it’s vs its” is when people get confused and use an apostrophe to show possession.

“most of it’s funding comes from grants”

both of which are horribly wrong. Applying the rule from above, if you substitute the “it’s” with the apostrophe for “it is,” neither of these sentences would work.

For example, “the puppy is in it is bed.” See? Horrible!

Once you know the rule, seeing sentences like these really does set your teeth on edge and it’s easy to see why linguists get so animated. 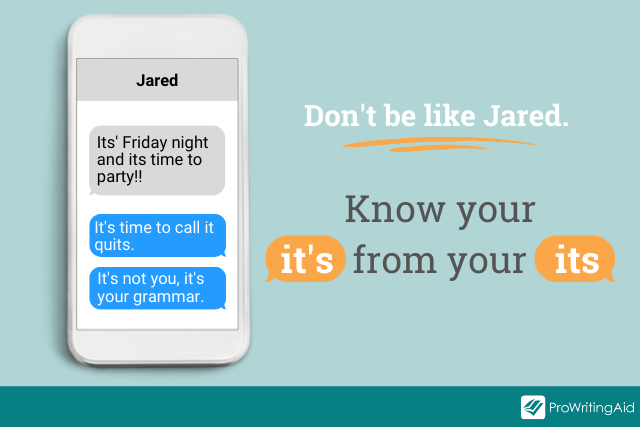 In “Eats Shoots and Leaves” Lynne Truss wrote the following about the it’s/its issue:

“To those who care about punctuation, a sentence such as “Thank God its Friday” (without the apostrophe) rouses feelings not only of despair but of violence. … Getting your itses mixed up is the greatest solecism in the world of punctuation. No matter that you have a PhD and have read all of Henry James twice. If you still persist in writing, “Good food at it’s best”, you deserve to be struck by lightning, hacked up on the spot and buried in an unmarked grave.”

However, there is one linguistic its/it’s related crime that is even worse—it's the invention of an entirely new word—“its’” with an apostrophe after the "s."

Just to clarify—THERE IS NO SUCH WORD AS ITS’. It doesn’t exist. It shouldn’t ever exist. It is an abomination. The only versions that have ever existed are “it’s” and “its” and their use has developed over hundreds of years, as we will see in the following section.

Its and It's: A Brief History

Originally, English (or rather Old English) functioned in the same way as many other languages and had nouns and pronouns that were gendered—either masculine, feminine, or neuter.

For a long time, however, the possessive pronoun of a neuter noun was actually represented with “his.” Thus, in the prologue to Chaucer’s Canterbury Tales you had the sentence:

This was written in Old English as:

Then, around 1600, English writers started to swap the “his” for the correct neuter pronoun of “its” but (somewhat confusingly for our purposes) did so with that pesky apostrophe in place. So, the same sentence above would have been written as:

“When the Wind also with it’s sweet breath.”

It was in the 1800s that this form was dropped as pronouns such as “his,” “hers” and “yours” became more widespread. Once this happened, English writers dropped that apostrophe altogether and settled on the usage we have today:

“with its sweet breath.” 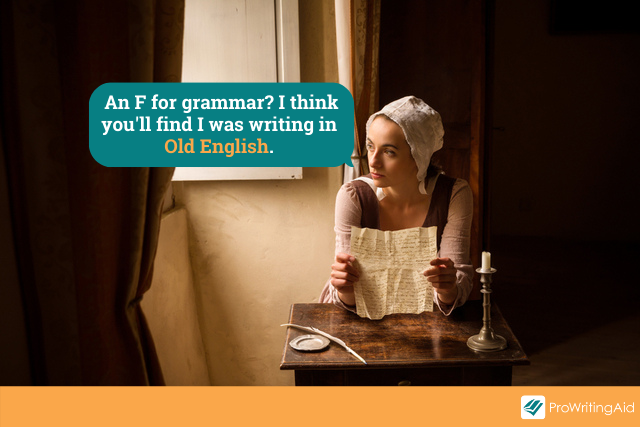 Its and It's: Correct Usage and Examples

A quick recap: the words “its” and “it’s” are both pronounced the same and have the same base pronoun "it." But the addition of that apostrophe changes the meaning completely.

“It’s” with an apostrophe is simply a contraction of “it is” or “it has.” However, without the apostrophe “its” becomes a possessive pronoun, just like “his” or “hers.”

How Do You Use It's?

“It’s” with an apostrophe is the easier of the two to remember. The only time that you ever use an apostrophe is when you wish to form a contraction of either “it is” or “it has.” This is done in the same way as any other pronoun and verb contractions (such as “they’ve,” “he’s” or "she’s.”) Let’s look at a couple of examples:

It’s always raining in this miserable country. It’s been so long since we had a sunny day.

And remember: every single one of these would work if you were to drop in “it is” or “it has” in their place. If in doubt, remember the golden rule: 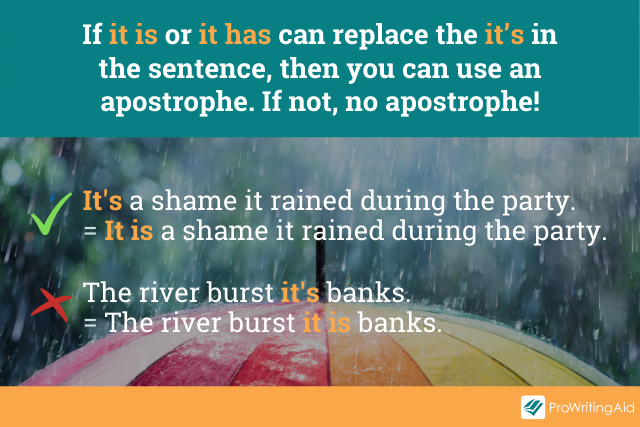 Still worried you'll get it wrong (or that a typo might slip through)? Use an editing tool for a little added peace of mind.

ProWritingAid's Chrome Extension will tell you if you've used the wrong "it's" (or "its") in emails, blog posts, tweets, Facebook updates, and more. It works pretty much everywhere you write online.

How Do You Use Its?

So, back to “its” without an apostrophe. This is perhaps the trickier of the two to get right. A quick reminder—“its” is the possessive form of the pronoun “it.”

As was mentioned above, this is the bit that normally confuses people as we are used to there being an apostrophe to show possession—for example, “Sally’s cookies were sold in Joe’s coffee shop.”

Do You Use an Apostrophe for “Its” to Show Possession?

Why Isn’t There an Apostrophe in the Word “Its?”

Thus, “one good thing about Joe’s coffee shop is its large selection of local cookies.” Or, if the cookies didn’t sell so well, “Joe’s coffee shop has closed down and been demolished. In its place is an Indian restaurant.”

And following the golden rule mentioned above, let’s try and drop “it is” or “it has” into an example:

This evening the Indian restaurant will open its doors for the first time.

Would it make sense to write “This evening the Indian restaurant will open it is doors?” Clearly not. So, we know that no apostrophe is needed. 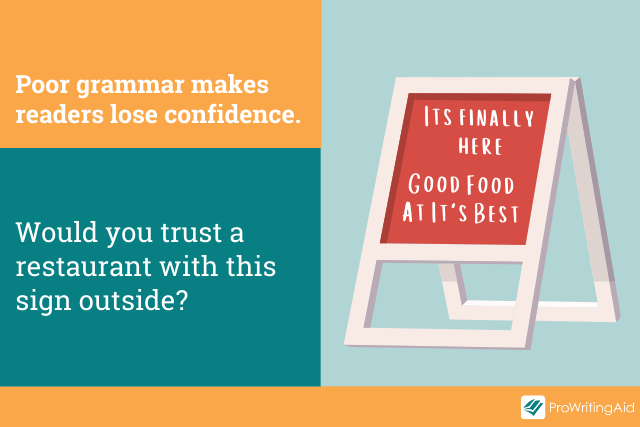 Here are a few more examples:

After reading this refresher on the difference between “it’s” and “its” you will hopefully never get the two mixed up again. Indeed, now you know the golden rule, you’ll probably find yourself recoiling in linguistic horror whenever you see someone else get it wrong! Be kind and send them a link to this article.

Spelling
Why should you not overuse "was/were"?

Spelling
Are you missing a punctuation mark at the end?

Spelling
Should I use a period after titles like "Mrs", "Dr", and "Capt"?

Spelling
What is the difference between 'alway' and 'always'?

Spelling
What is the difference between "breath" and "breathe"?