The Grammar Guide Nouns What form of noun should be used after "few," "several," and "many"?

What form of noun should be used after "few," "several," and "many"? 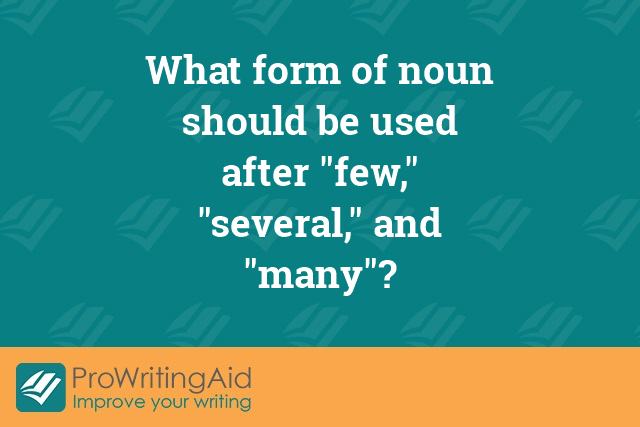 Few, several, and many are determiners that help clarify numbers or amounts of various nouns. It’s important that the nouns following these words are plural for agreement.

Few means that there are more than one or two items but not many. It refers to specific, countable nouns. As a determiner, few must precede a plural noun because it always refers to more than one noun.

Several means that there are more than two or three but still not many. It has a similar definition to few, but the amounts are relative depending on the situation. It must be followed by a plural noun.

Many means a lot, or more than several. This amount is relative based on the situation. Like the others, it must precede a plural noun.

Nouns
Sentence Fragments: What They Are and How to Correct Them

Nouns
It's vs Its: When Should You Use Them

Nouns
What is the difference between "weather" and "whether"?

Nouns
What is the difference between "breath" and "breathe"?

Nouns
What is the difference between "advise" and "advice"?

Nouns
What is the difference between 'complement' and 'compliment'?

Nouns
Whose vs Who’s: What’s the Difference?

Nouns
Have vs. Has: What's the Difference?