The Grammar Guide Comma Should I use a comma between a city and a country/a city and a state? 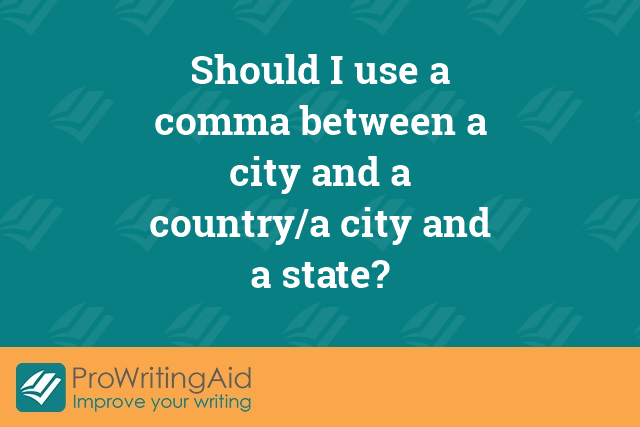 In geographical names with two or more elements, you should use a comma after each different element. This helps the reader to see the different component parts of the address. You should also use a comma after the last item in the name unless it comes at the end of the sentence in which case you should use a period (or question mark if it is a question). e.g. Is Oxford, England, full of clever people?

The main times when geographical names are composed of two or more entities are:

A classic example would be if you used an address in a piece of text, e.g. Eric Wimp, living at 29 Acacia Road, Nuttytown, eats a banana to transform into Bananaman.

The parts of an address should be separated by commas and it should be followed by a comma unless it appears at the end of a sentence.

Comma
What is the difference between "weather" and "whether"?

Comma
Passed vs. Past: What's the Difference?

Comma
What is the difference between "advise" and "advice"?

Comma
What is the difference between 'complement' and 'compliment'?

Comma
What is the difference between 'insure' and 'ensure'?

Comma
Whose vs Who’s: What’s the Difference?

Comma
A While vs. Awhile: What's the Difference?