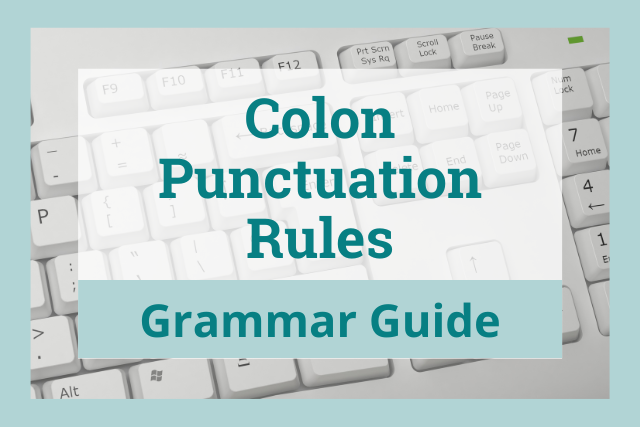 The colon punctuation mark has several uses in English grammar and mechanics. Let’s take a look at what a colon is and how it’s used in writing.

Never misuse a colon in your writing with ProWritingAid. Try out our free grammar checker today.

What Is a Colon in Writing and Punctuation?

A colon is a punctuation mark that looks like two dots stacked on top of each other (like this :).

The colon has a few grammar usages in sentences and several other uses that are considered English “mechanics,” such as in titles and times.

British vs American English Use of a Colon

Most punctuation rules are the same for both British English and American English. The only difference in how a colon is used is in time.

In American English, we write times with a colon between the hour and minutes, e.g. 3:45. British English uses a period, also called a full stop, instead, e.g. 3.45. 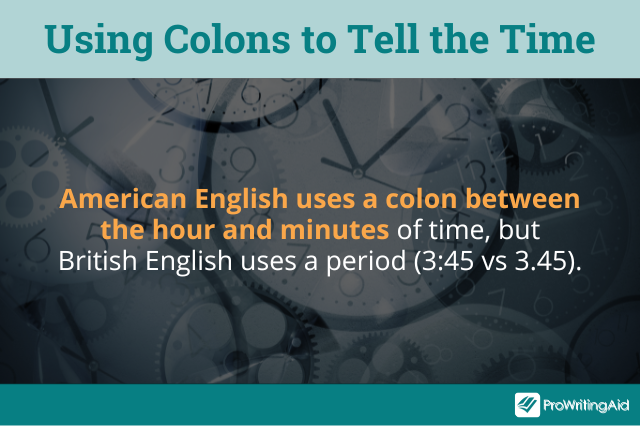 How to Use a Colon Punctuation Mark

Let’s look at the mechanical uses of the colon. There are six major non-sentence uses:

We’ve already discussed how to use a colon to write times in American English. 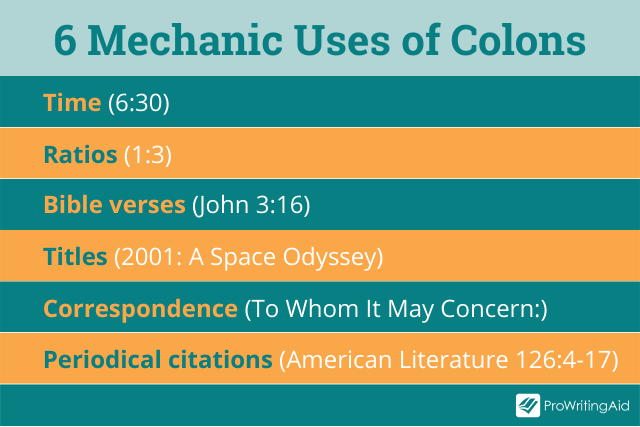 Sometimes book, play, movie, or other media titles include colons to separate the main part of the title from the subtitle. Here are some examples:

Ratios are also written with colons. For example, you might tell someone to make a vinaigrette with a 3:1 oil to vinegar recipe.

When you cite a periodical or journal, use a colon between the volume and the page numbers, like this: American Journal of Archaeology 126: 3–17.

Bible verses always use a colon between the chapter number and the verse number (e.g. John 3:16).

Certain parts of correspondence, especially in a formal letter or business letter, use colons. Here are a few examples:

When to Use a Colon in a Sentence

There are three uses of the colon punctuation mark in sentences. Let’s look at each in detail. 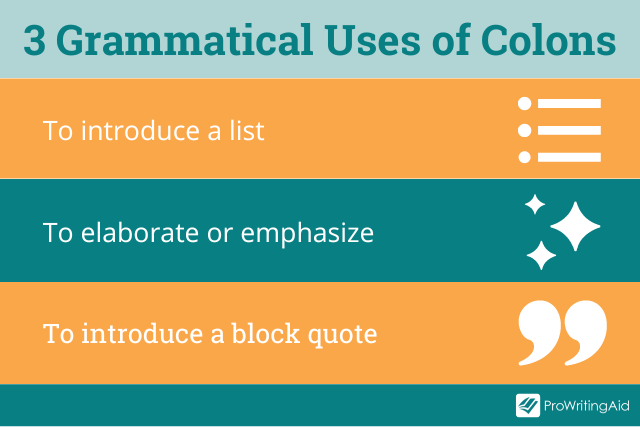 The primary use of the colon in a sentence is to introduce items in a list. Not all lists use colons, however, so how do you know when to use one?

If a list appears in the flow of a sentence, do not use a colon.

A colon introduces a list that is set apart from the main part of the sentence.

2. To Elaborate or Emphasize

Colons sometimes precede words or clauses that emphasize or provide an explanation of a previous clause.

In a complete sentence, you can use a colon between two independent clauses if the second clause further explains the first part of a sentence.

If both independent clauses could stand on their own as a complete sentence, capitalize the first word of the second sentence as if it were separate.

The philosopher’s life work revolved around the following question: What does morality look like in late-stage capitalism?

My brother had shocking news: he was moving to Japan in just two weeks.

Making a peanut butter and jelly sandwich has four steps: First, gather your bread, jelly, and peanut butter. Second, spread peanut butter on one side of the bread. Third, add jelly to the other piece of bread. Finally, put the bread together and enjoy!

Colons can also provide emphasis. In these cases, the information after the colon does not have to be complete sentences.

You can place one word, a phrase, or a dependent clause after the colon. Do not capitalize the first word after the colon, unless it’s a proper noun.

Here are some examples of colons for emphasis:

3. To Introduce a Block Quote

When you put a long quotation in your writing, it’s a good idea to use a block quote. Block quotes do not use quotation marks.

Instead, write a colon after the introductory phrase, then start the block quote on a new line.

My life philosophy can be summed up in this quote by Ernest Hemingway:

Try to learn to breathe deeply, really to taste food when you eat, and when you sleep, really to sleep. Try as much as possible to be wholly alive with all your might, and when you laugh, laugh like hell. And when you get angry, get good and angry. Try to be alive. You will be dead soon enough.

Here are some more examples of how to use a colon.

Like many punctuation marks, the colon has several grammar and mechanics uses in English.

Learning these rules will help you use colon punctuation correctly in your writing.

Can I use a colon before a conjunction?