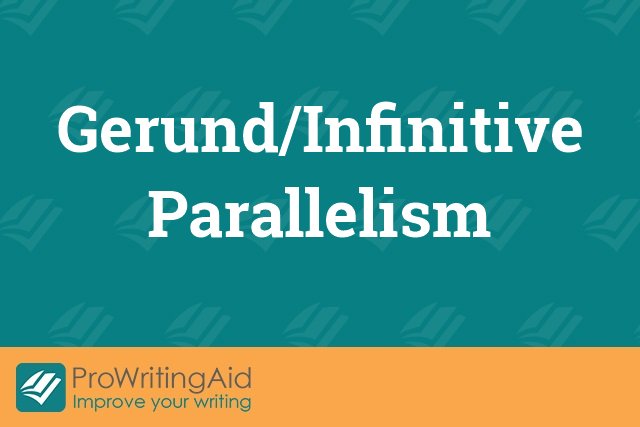 In English, it's important to use parallelism in your sentences. Mixing verb forms, like a gerund and an infinitive, in the same clause reads unnaturally to native speakers. Parallelism provides a balance to your clauses.

Incorrect: He likes playing video games and to draw.

Correct: He likes to play video games and to draw.

Parallelism, or parallel structure, is a way of providing balance to sentences or clauses by using a similar grammatical structure. Parallelism often appears with verb forms. Mixing verb forms sounds unnatural to native English speakers and affects the readability of a sentence. A common parallelism mistake is mixing gerunds with infinitives.

A gerund is a verb that functions like both a noun and a verb. In English, gerunds end in -ing. Here are some examples of gerunds in sentences.

In the first sentence, playing board games functions as an object, but playing is also a verb. In the second sentence, reading the news functions as the subject and a verb.

An infinitive is the most basic form of a verb. In English, a full infinitive includes the word to. Here are some examples of infinitives:

To ensure parallelism, make sure you are not mixing gerunds and infinitive phrases. The sentences or clauses with the mixed verb forms will sound unnatural and unbalanced.

Incorrect: He likes playing basketball and to watch television.

Correct: He likes to play basketball and watch television.

Incorrect: She likes reading, playing board games, and to sing.

Correct: She likes reading, playing board games, and singing.

Correct: She likes to read, to play board games, and to sing.

Parallelism
What is the difference between "weather" and "whether"?

Parallelism
Passed vs. Past: What's the Difference?

Parallelism
What is the difference between "advise" and "advice"?

Parallelism
What is the difference between 'complement' and 'compliment'?

Parallelism
What is the difference between 'insure' and 'ensure'?

Parallelism
Whose vs Who’s: What’s the Difference?

Parallelism
A While vs. Awhile: What's the Difference?