BlogGrammar RulesEm Dash: What It Is and How to Use It

Em Dash: What It Is and How to Use It

What Is an Em Dash?

The em dash is one of the most under-appreciated punctuation marks. It looks sleek and professional when you write. And it’s multifunctional!

The em dash is versatile and can be used in place of many other punctuation marks, which increases sentence variety and readability.

It triggers readers’ brains to insert a slightly longer pause than a comma or semicolon, which can aid in reading comprehension.

Keep reading for a comprehensive guide on everything you need to know about this punctuation multitool.

When Do I Use an Em Dash?

Celebrity chef Alton Brown has said many times that unitools, kitchen gadgets with only one function, have no place in the kitchen.

Think of an em dash like a kitchen gadget that you can use in many situations, from scraping to stirring to spreading. It’s multifunctional. At its most basic definition, an em dash can be used to replace commas, colons, semicolons, and parentheses. 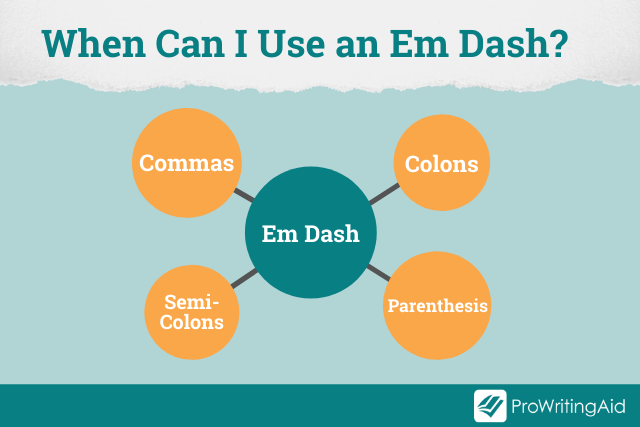 How do you know when it’s correct to replace one of those punctuation marks with an em dash? Let’s look at several instances when em dashes can become your new best friend.

Parentheses are used for so many different things in writing that we often overlook them. For example, when we’re used to seeing parentheses show in-text citations, we may not read what’s inside them even when it’s very important information.

Parentheses also come across as very formal because they are so often used in academic and technical writing, so they may not match the voice of your piece.

When parentheses are used to off-set thoughts within a sentence, em dashes can take their place.

A parenthetical thought either provides more information or is used similarly to an interjection. We use them all the time when we speak, but you might have trouble thinking of written examples. Here are a few.

When you use an em dash in place of parentheses, it’s important to omit any other preceding or following punctuation. Sometimes parenthetical thoughts may be marked with commas, which we’ll discuss in further detail below. If this is the case, em dashes help the information stand out more, but you should get rid of the commas.

Colons are often used similarly to off-set thoughts, but they are used at the end of a clause instead of the middle. Colons are also used to start a list at the end of a sentence or clause. You might see them used like this:

While colons are formal and unassuming, em dashes look more conversational. They also stand out more—our brains pick up on the negative space, which adds emphasis to the end of your sentence.

Let’s look at those same sentences to compare the difference in punctuation.

The same sentences are easier to read with an em dash because the colons are nearly unnoticeable. The em dash allows our brains to pause while reading, and the point of the sentence is driven home.

Em dashes can replace commas in certain situations. In many cases, the commas are used similarly to parentheses to off-set thoughts or interject more information.

That makes em dash rules easy to remember—em dashes are used to off-set and emphasize part of a sentence or clause. Extra emphasis can also help establish our tone.

The interjection is easier to see with the em dash. The em dash also affects the tone of the sentence. Because it’s more emphasized, we can sense annoyance or anger rather than a matter-of-fact statement.

The em dash replaces the commas to signify that graduating with honors is important and not just extra information. It can also help to establish a tone of pride or happiness.

When you use an em dash in this way, be sure to completely omit the commas. 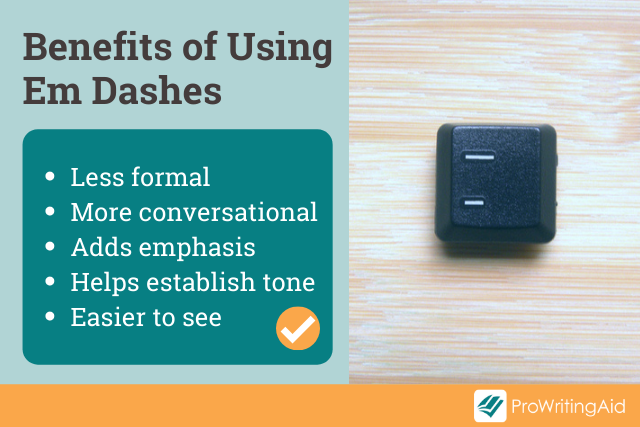 There are a few ways to separate independent clauses in English. One way is, of course, with a period. You can also use a comma and a conjunction.

But there are two less common ways to separate independent clauses, and it’s a divisive issue among writers and grammarians.

A semicolon can connect two independent clauses without the need for a conjunction. See the sentence below:

These two independent clauses are closely related enough to warrant being one sentence, but a conjunction doesn’t fit well. The traditional choice would be a semicolon.

But semicolons aren’t always a well-loved punctuation mark. In fact, a writer named Donald Bethelme calls them “ugly, ugly as a tick on a dog’s belly.”

Ouch. Poor semicolons. Many other professionals consider them out-of-date or too formal, unless you’re making a list that includes commas. But there are also those among us who think the semicolon has become unappreciated. I am one of these people, much to the chagrin of my editor.

Enter the em dash. I’ve met writers and editors who want to replace every semicolon with an em dash. Here’s what it looks like with the same example as above:

It does look more informal, but the em dash serves a different purpose than in our previously discussed usages. Instead of emphasizing a point, it is elaborating on a point. 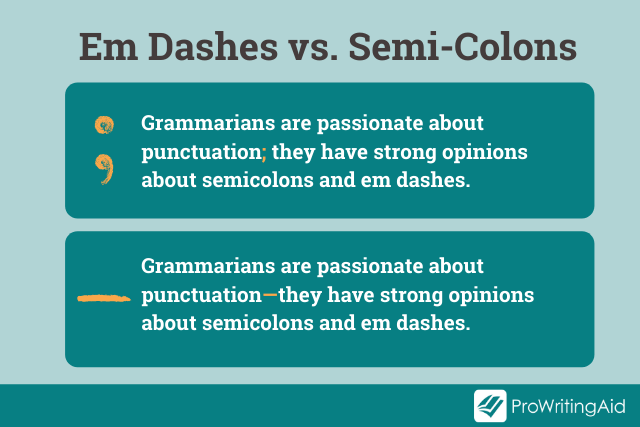 Of course, there are people who think using an em dash in this example isn’t grammatically correct.

If you Google “em dash in place of semicolon,” every website will tell you something slightly different. Here at ProWritingAid, we want you to know every side of the semicolon/em dash debate.

In general, err on the side of avoiding too much of a good thing. Both punctuation marks are valid, but overusing any grammatical feature will bog down your writing and affect pacing and readability.

While we might use asterisks or a collection of random punctuation to bleep out written words on the internet (and in comic books), em dashes are the more accepted way to filter words in professional writing. Filtering words is likely the only time you will use more than one em dash in a row.

If you’re writing a scene à la Jerry Springer, you can use two em dashes after one or two letters to filter a word. It’s a written censor.

Place a space between the em dashes but not between the letter at the beginning of the word or any punctuation that follows the word.

It’s not just for swear words. A word may need to be redacted for confidentiality. You might be transcribing a note with words that have been erased or blurred by water damage or an audio recording that isn’t clear.

You can use multiple em dashes to filter out an entire word. Never use more than three consecutive em dashes, but two works just fine. Make sure whichever you use is consistent throughout your writing.

Both of those are grammatically correct. In these cases, a space should occur on either side of the em dashes and between them.

A final use of the em dash is to cut off thoughts or dialogue. Think about how often you interject something unrelated in your speech or you lose your train of thought. It also works for someone being cut off by another person or to indicate surprise.

What’s the Difference Between an Em Dash, an En Dash, and a Hyphen?

There are three types of dashes in English punctuation. Do you know the difference between them? 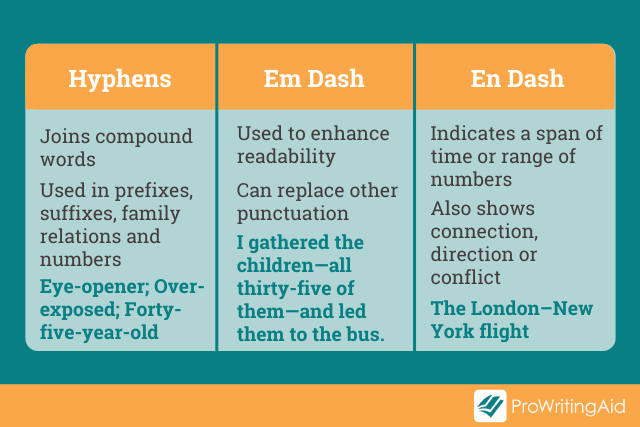 By now, you should have a pretty good idea of what an em dash is and how to use it. Without going into too much detail, let’s clarify the difference between and em dash, en dash, and hyphen.

A hyphen is a very short dash that is typically used for compound words, like “eye-opener” or “thirteen-year-old girl.” It’s also what you see inside web addresses.

An en dash is used only to show a span of time, range of numbers, or connection, direction, or conflict.

ProWritingAid’s consistency report shows you how many em and en dashes you have used in your document. if you know that you only intended to use em dashes, this can help you work out where you may have used en dashes by mistake. 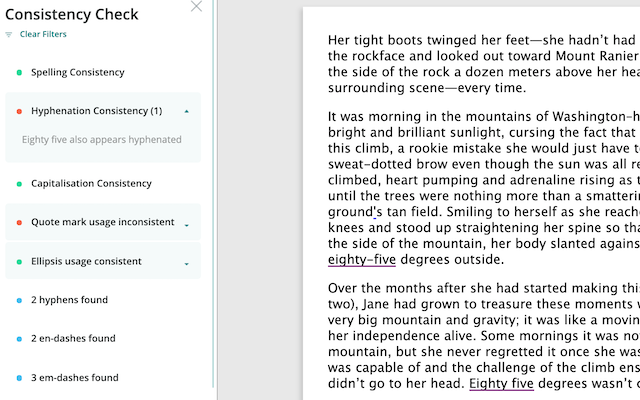 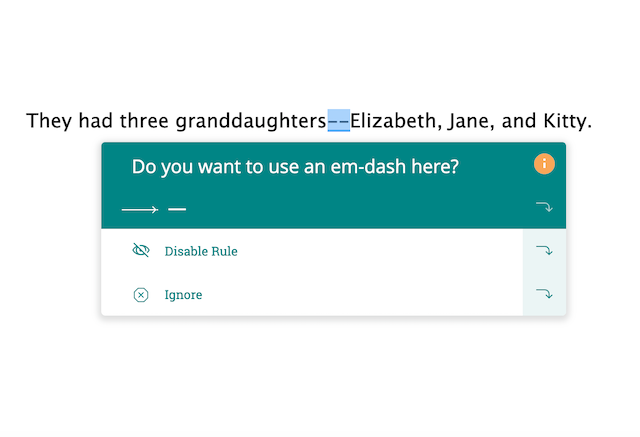 As you can see, ProWritingAid makes quick work of checking punctuation consistency. Try it now with a free account.

Where do spaces belong with em dashes? You have probably noticed that this article has not used spaces before or after em dashes. This is the generally accepted rule in most cases. However, like most things in the English language, there are exceptions.

AP (Associated Press) style requires a space before and after an em dash. This means if you are a journalist or writing for a newspaper, you will probably use spaces.

If you aren’t sure what style guide you are supposed to use, always ask your manager or editor. And if you’re creating your own style guide, you get to make your own rules for spaces! 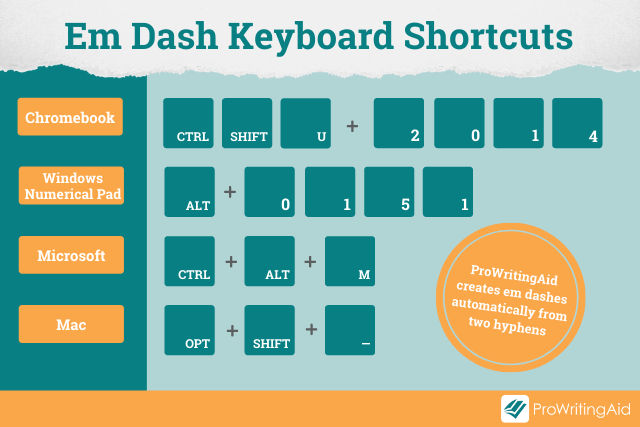 How to Type an Em Dash

You don’t have to go searching through the symbols list on your word processor to use an em dash. On Microsoft Word and Google Docs, you can turn two hyphens into an em dash by putting a space after them. Of course, if you aren’t writing in AP style, you’ll then need to delete that space.

If your computer has a numerical keypad, you can use alt codes. This requires you to hold down the ALT button and then enter a numerical code one by one. The alt code for an em dash on Windows is ALT+0151. Don’t enter the + sign, just hold down ALT then type 0-1-5-1 on the number pad.

It’s trickier if you don’t have a numerical keypad. On Windows, you can use CTRL+ALT+M on Microsoft Office. If you’re typing on the web, you’ll need to right-click and open your emoji keyboard. There will be an Omega symbol. When you click on that, you’ll see all the punctuation symbols. Find the em dash and click to insert in your text.

On a Mac, press Option+Shift+dash(-) to insert an em dash.

Change Up Your Punctuation

So, now you know how to use em dashes, why not give them a try? Change up your punctuation to enhance readability and set the right tone.

The Internet's Best List of Clichés
Improve Your English Grammar With These Sites
What are Phonemes, Graphemes, and Digraphs?
Let’s Get Possessive
In Defense of Passive Voice
Should I Use "Which" or "That"?
The Perfect Grammar Cheat Sheet [infographic]
The Best Places to Find Free Grammar Help Online
What’s Better: Yours Sincerely or Yours Faithfully?

jonwilkins
Is it M dash or space M dash space?

amy.cohen
Hi! Thanks for reaching out. It's "space M dash space." :)

Grammar Rules
Inter vs Intra: How to Use Each Prefix Correctly 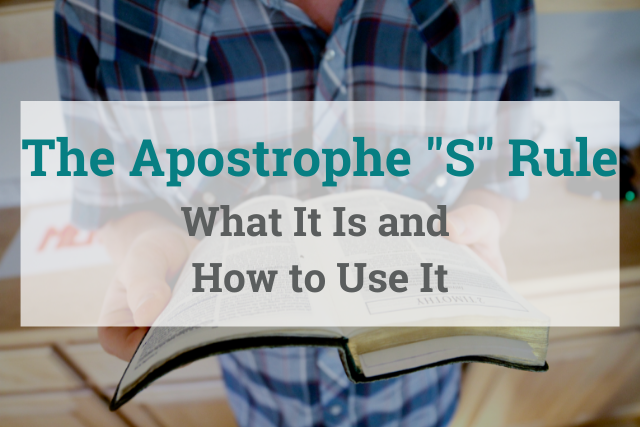