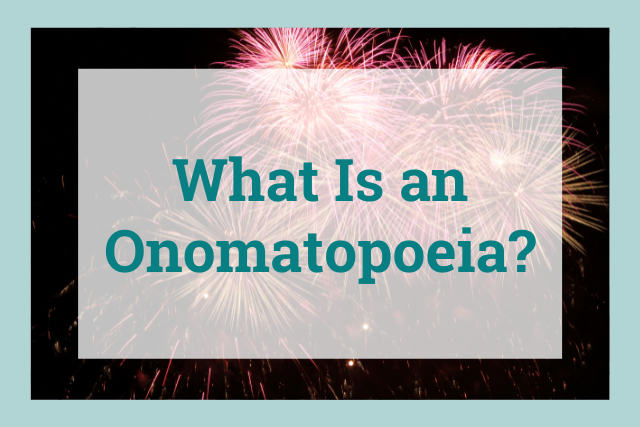 What Is an Onomatopoeia?

An onomatopoeia is a word whose sound reflects its meaning.

The physical sound of an onomatopoeia imitates, suggests, or resembles the word it describes.

For example, if you’ve ever stuck a pin in a balloon, you’ve heard the resulting “pop”. That word “pop” is an onomatopoeia because it sounds like what you hear. So the sound matches (or at least mimics) its meaning. 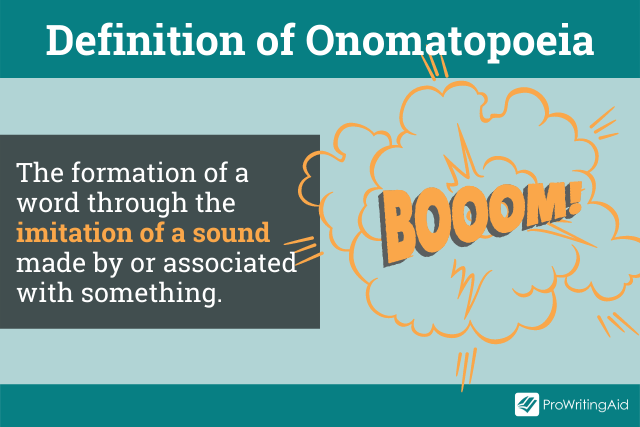 How Do You Pronounce Onomatopoeia?

The word "onomatopoeia" itself has an intimidating appearance. It’s got twelve letters and eight of them are vowels, making it a tricky word to analyze visually and then sound out.

Now you say it.

One more time—I told you it’s a mouthful. It requires practice. 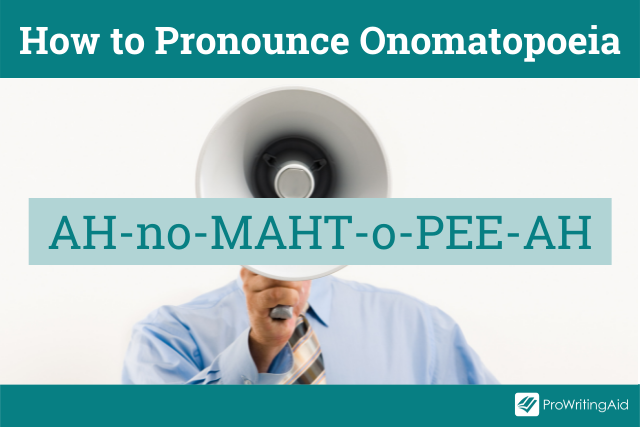 Do you see the irony here? At first glance, it’s a challenge just to figure out how the word onomatopoeia itself sounds.

"Onomatopoeia" is definitely not an example of an onomatopoeia!

Where Does the Word Onomatopoeia Come From?

The word onomatopoeia is a Latin word with Greek roots. It’s formed from the Greek words “onoma”, which means “name”, and “poiein”, which means “to make”.

According to Merriam-Webster the word was first used in the English language in the mid-1500s, though people had been creating words from sounds around them much earlier.

What Are Some Examples of Onomatopoeia?

Though it might have taken you a few tries to get comfortable with the spelling and pronunciation of the term, it’s likely that some of your earliest words were examples of onomatopoeia. 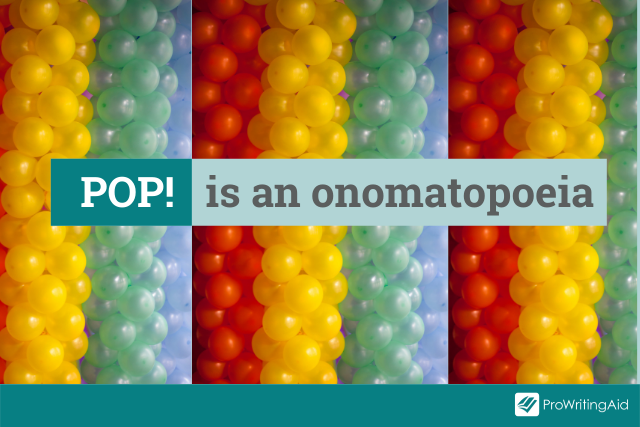 If you have toddlers in your life, you probably spend a lot of time asking them, “What does the (fill in the animal name) say?"

The answer will be an onomatopoeia—the sounds of the words mimic what the words mean or the natural sounds the words represent. 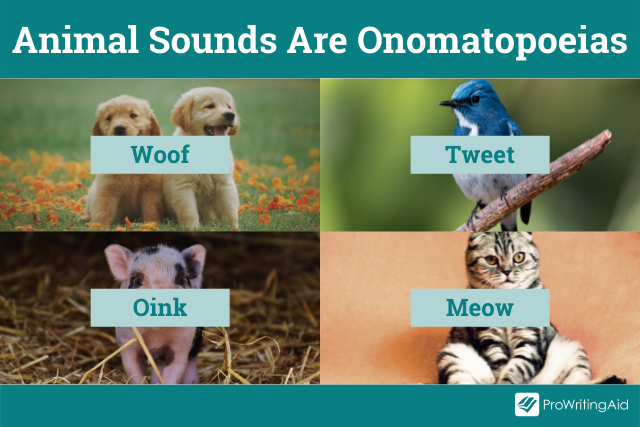 These words are all examples of onomatopoeias.

The same holds for these everyday examples:

How Are Onomatopoeias Different from Other Words?

Onomatopoeia is a type of figurative language—it is used to produce a certain effect in literature.

While I’m sure you can easily think of many everyday examples, onomatopoeic words are special—unique.

Most of the words we use have no aural connection to their meaning—their sounds reveal nothing about their meaning.

For example, I’m typing on my keyboard. The sound of the word keyboard doesn’t tell you anything about the meaning of the word.

The same goes for chair, one of which I am sitting on.

The sounds of those words and the majority of others are arbitrary—we have just learned through convention and use that those arbitrary sounds represent something.

Though onomatopoeic words mimic the natural sounds we hear, their spellings and meanings are not universal, which adds another layer to their uniqueness.

For example, English speakers generally describe the sound a rooster makes as cock-a-doodle-doo, whereas Spanish speakers would use kikirikí, ki-kiri-kí.

Our respective languages and interpretations of sound influence our onomatopoeias.

Are There Different Types of Onomatopoeia?

While all onomatopoeias reflect, describe, or suggest a sound, there are different varieties of onomatopoeia. Let's dig into each type. 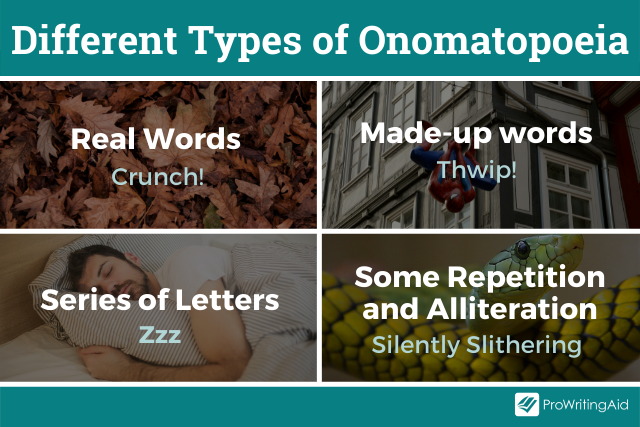 This type is a “conventional” onomatopoeia and is likely the one most familiar to you.

If there is no actual word available to deliver a sound with the specificity and nuance that you want it to, you might create your own onomatopoeia.

James Joyce and Marvel Comics have done so, so you'll be in good company.

In Ulysses, Joyce invented the word tattarrattat to convey the sound of someone knocking on the door.

Marvel Comics created thwip to describe the sound of Spiderman releasing a web and snikt when Wolverine extends his deadly claws.

3. A Series of Letters that Create a Sound

No actual words, real or made up, required for this type of onomatopoeia; sounds are enough.

For example, tsk, tsk is a sound expressing disapproval, zzz resembles the sound of a deep sleep, and bzzzt indicates a buzzing sound (buzz itself is an onomatopoeia).

Onomatopoeic effect is when real words, that aren’t onomatopoeaic themselves, are used in such a way as to emulate a sound.

Some words aren't onomatopoeias themselves, but a letter or sound within them is used to suggest a certain sound.

For example, in the following sentence the “S” sound is repeated to help evoke the hiss of the snake:

In this excerpt from Edgar Allan Poe’s “The Bells”, there are both onomatopoeic words and repeated words that create the onomatopoeic effect:

Yet the ear distinctly tells,

How the danger sinks and swells,

In the clamor and the clangor of the bells! 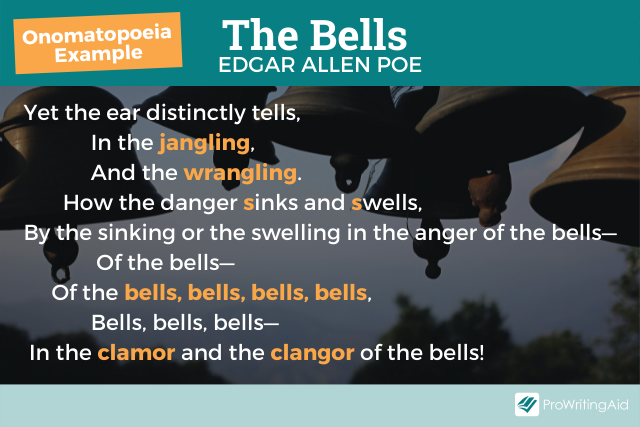 The sounds of the words “jangling” and “clangor” describe the sound of the bells themselves, while the repetition of the word “bells” echoes the constancy of the ringing of those bells.

Why Do Writers Use Onomatopoeia?

Words are to writers what color is to an artist. The more colors and mixtures available, the more precisely and vividly the artist can present an image.

What Are Some Onomatopoeia Examples in Literature?

As poetry is a sensory-driven genre, poems are often treasure troves of onomatopoeia.

In “Honky Tonk in Cleveland” Carl Sandberg does the same:

“It's a jazz affair, drum crashes and cornet razzes.

The trombone pony neighs and the tuba jackass snorts.

The banjo tickles and titters too awful.”

Gwendolyn Brooks shows the power of snow over sound through onomatopoeia:

“It SHUSHES/It Hushes/The Loudness of the Road” in “Cynthia in the Snow.”

Eve Merriam treats us to a variety of forms of onomatopoeia in her poem, also called Onomatopoeia.

You will also see the repetition of sounds in short bursts to create the sound of a sputtering spigot (sputter, utter, splutter/slash, splatters, scatters). 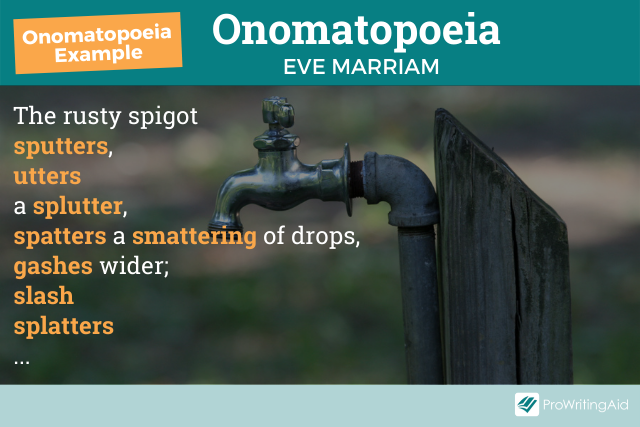 While poetry is rich with onomatopoeia, prose writers also use the technique.

When I was thirteen, I practically had S.E. Hinton’s The Outsiders memorized. Come on—you know you did too. Let’s quote it together now:

You quoted with me, didn’t you?

And now visions of Ponyboy and Sodapop dance in our heads, just like we’re thirteen again.

Anyway—that opening sentence does not contain onomatopoeia, but this one, spoken by character Dallas Winston, does:

"Damnit, Johnny..." he begged, slamming one fist against the wall, hammering it to make it obey his will. "Oh, damnit, Johnny, don't die, please don't die..."

The sound of the slamming fist intensifies Dallas’ angst and deepens our emotional response to the scene.

In this example from the Joy Luck Club, Amy Tan helps draw us into the young Waverly’s tense experience.

The character had disobeyed her mother and run away from home for hours. The character narrates her nervous return:

“I turned the knob. The door was locked. I heard a chair moving, quick steps, the lock turning—click! click! click!—and then the door opened.”

I’m sure we’ve all been in tense situations where the actual clicking of a lock, ticking of a clock, or creaking of floorboards increased our anxiety.

Waverly experienced these as she prepared to face the person on the other side of the door. 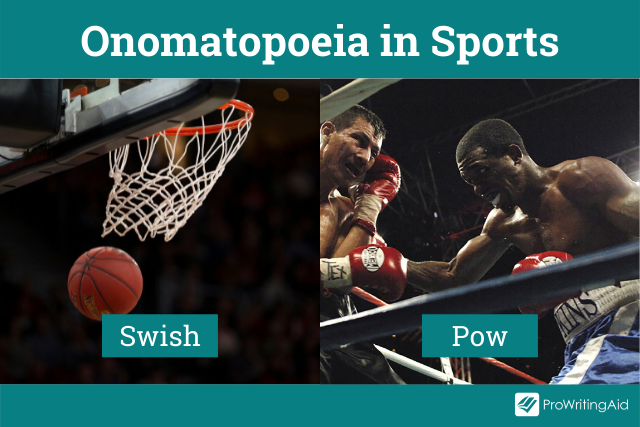 There are many onomatopoeia words related to sports. These words appear in sports poems, stories, and even sports reporting.

Or recently, when Novak Djokovic “smashed his racket on the ground” at the 2021 US Open. 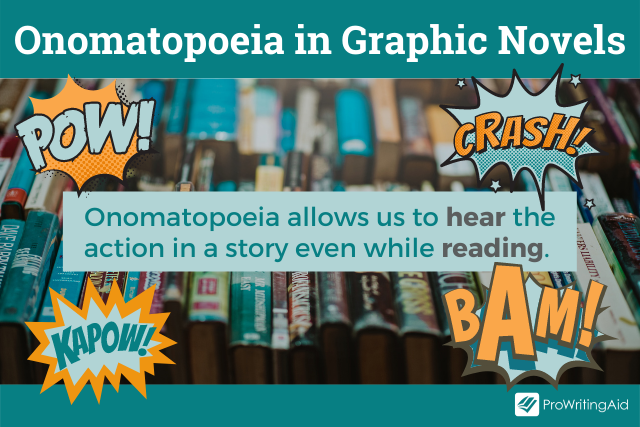 Graphic novels and comics are well known for their use of onomatopoeia.

The literary device is an integral component of the genre, providing such words as “visual” sound effects to their action-packed pages, which would otherwise feel silent.

Authors of graphic novels consider not just the right word to convey the appropriate sound effect, but the size and color of the letters as well as other design features of the panel.

How Are Onomatopoeia Words Used in Advertising?

Advertisers have one primary goal: to make us buy their product or service.

To accomplish that, they have to first let us know what that product is and then ensure that we will remember it when it comes time to make the purchase.

Many advertisers use onomatopoeia to make those things happen.

Their use of sound-evoking words is thoughtfully crafted to tell us something about their product or brand and help us remember it.

Here are some onomatopoeia examples in actual ad campaigns:

“Snap! Crackle! Pop!" Is the sound of Rice Krispies. According to Kellogg’s advertisements, these inanimate puffs of cereal are so light and crispy they actually tell you!

Mazda had a successful years-long ad campaign using “Zoom Zoom,” an obvious and effective reminder that with their cars, you’ll move efficiently.

And of course the famous and effective earworm “Plop, Plop, Fizz, Fizz oh what a relief it is!” used by the makers of Alka Seltzer to remind us, literally, of how their product works to bring relief.

Even onomatopoeias have synonyms, so make sure you have the right word before you use it in a marketing campaign.

ProWritingAid's Word Explorer shows a variety of contextual synonyms so you can review all the options before deciding on an onomatopoeia. 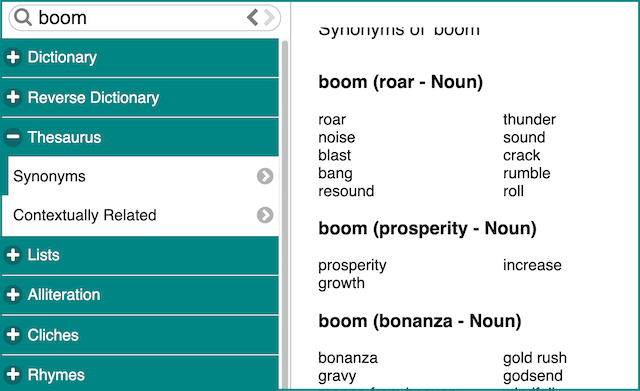 Try the contextual thesaurus with a free ProWritingAid account.

What is the Difference Between Onomatopoeia vs. Interjection?

That doesn’t mean every enthusiastic expression is an example of one. Sometimes, an expression might just be an interjection.

An interjection is a spoken emotional outburst. It’s a word or sound that expresses a feeling. Ouch! Wow! Hooray! Yikes! Are examples of interjections.

They are full of energy and often are unique sounds, but unlike onomatopoeia, they do not imitate actual sounds. 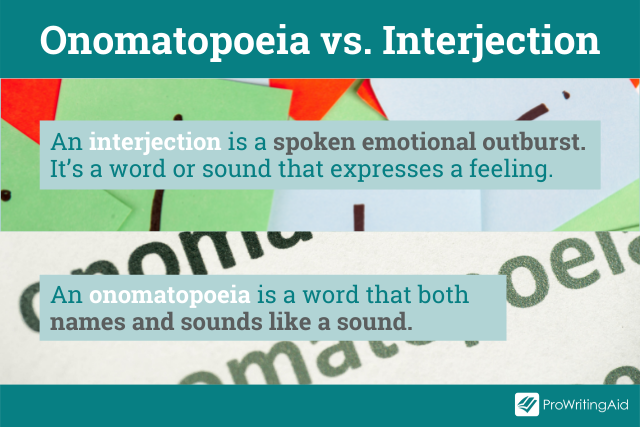 Are Clichés and Onomatopoeia the Same?

Here we are at the end of our discussion. All’s well that ends well and time has flown.

Notice my clichés? Did you know that cliché is an onomatopoeia?

As the story goes, a French printer decided to make printing plates with commonly used sayings on them to avoid having to rewrite those sayings time and time again.

The noise of the printing process when using the plate made a sound like “cliché.” An onomatopoeia was born and has evolved into a word with its own meaning.

Onomatopoeia examples are all around us, so listen well!