Infinitive Verbal: What Is It? 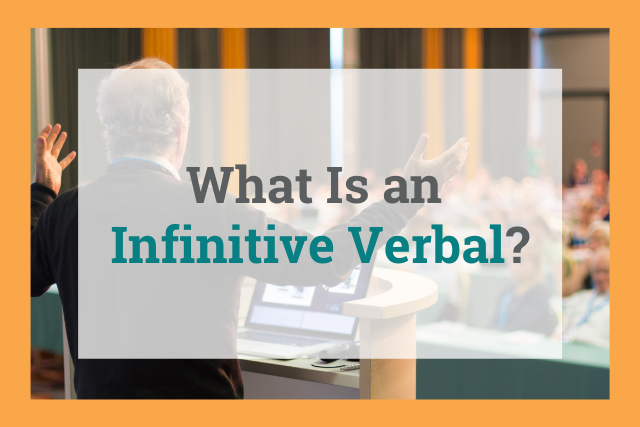 Verbs come in many forms as we conjugate them and put them in the correct tense. To make matters more complicated, we can take many of these verbs and change their function completely!

Infinitives are an example of a verb form that isn’t used as a verb. You might be familiar with the concept of infinitives if you’ve studied a language other than English. They don’t get as much attention in English grammar lessons, but you’re actually using them all the time—and you probably don’t even know it!

In this article, we will cover what an infinitive verb is, how to identify and write them in sentences, how they function, and more. Let’s dive in.

What Is a Verbal?

We can’t fully understand infinitive verbals without knowing what a verbal is. Verbs come in many forms. Sometimes these forms don’t function as a verb in a sentence; they might act as a noun, adjective, or adverb. When a verb form acts as a different part of speech, we call this a verbal. 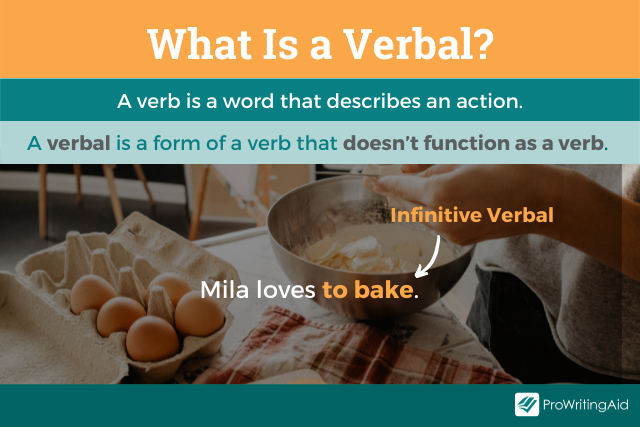 There are three types of verbals: participles, gerunds, and infinitives. Participles act as adjectives, and might use a past or present form. One example is the phrase "the chopped onion." "Chopped" is the past participle form of the verb "chop," but it’s describing the onion.

Gerunds use the -ing form of a verb to act as a noun. You might say, "I enjoy cooking." The verb is "enjoy," and the gerund is "cooking."

Finally, there are infinitive verbals. They’re more complicated than other verbals, so let’s start by defining them. 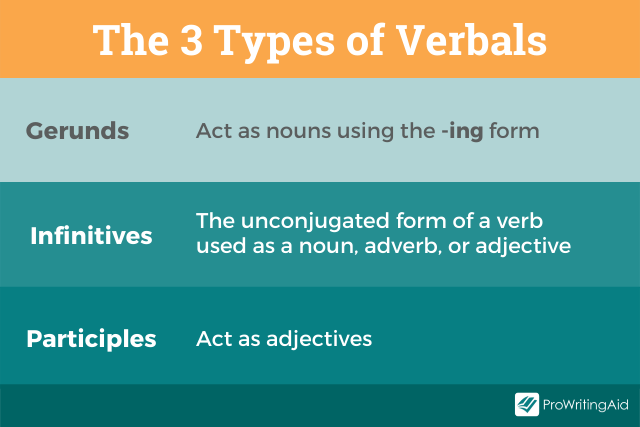 What Is the Infinitive Verbal?

Conjugation is the act of changing a verb to fit the subject, tense, or mood. You may add an -s to say, "She climbs." You might add an -ed to make the verb past tense, as in, "She climbed."

Often, an infinitive also has the word "to" in front of it, as in to dance, to run, etc. However, it does not have to have the "to." We’ll talk more about those types of infinitive verbs later in the article.

Infinitives are a type of non-finite verb, which means it will never be the main verb of a sentence. Finite verbs are verbs that can be conjugated and used as the main verb. 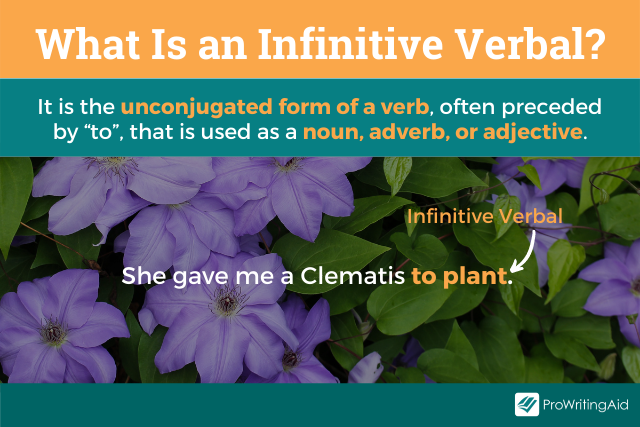 What Is the Difference between the Infinitive Verb and a Conjugated Verb?

Without the "to" in front, infinitive verbs look just like the simple present tense of a verb, with the exception of the third-person singular form, which requires an -s or -es.

So, what’s the difference between infinitive verbs and the simple present conjugated verbs?

It has to do with the function. Infinitive phrases do not function like verbs. It is not directly preceded by a subject. Let’s look at an example:

The infinitive "to cook" acts like a noun because it is the answer to "what do you like?"

I’ve always found it easier to understand infinitives in the context of learning other languages.

If you have ever studied another language, the verbs you learn how to conjugate are infinitives. It’s the most basic form of a verb.

For example, you might learn the Spanish word "comer" in an introductory class. In English, this is the verb "know" or "to know." These are both infinitive verbs. Neither are preceded by a subject; they follow other verbs that are conjugated.

Because our simple present tense doesn’t require much change when we conjugate, we don’t always learn about infinitive verb phrases when we learn basic English grammar.

How Do I Identify the Infinitive Verb in a Sentence?

A quick way to identify an infinitive is by looking for the word "to" in front of the verb. However, this won’t always work, as with bare infinitives. We’ll talk about those in the next section.

The best way to identify an infinitive phrase is to ask yourself if the infinitive verb is acting as a noun, adjective, or adverb. In other words, if you replace it with one of those parts of speech, will the sentence still make sense? If the answer is yes, you’ve found an infinitive.

Do Infinitives Always Use “To”? 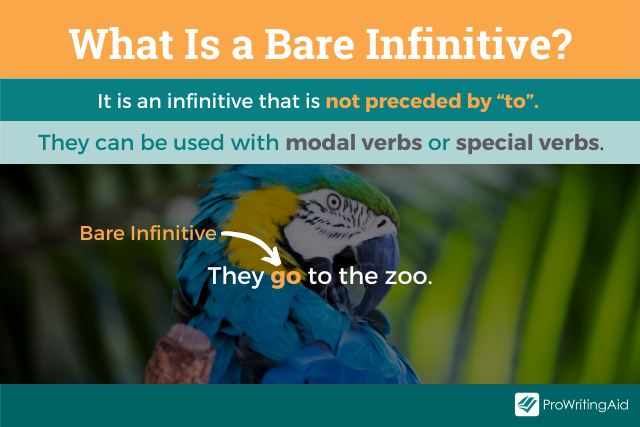 We use bare infinitives with certain verbs called modal verbs or helping verbs. These verbs include words like might, may, could, can, should, and will, to name a few. In the examples below, we have highlighted the infinitive and bolded the modal verb. 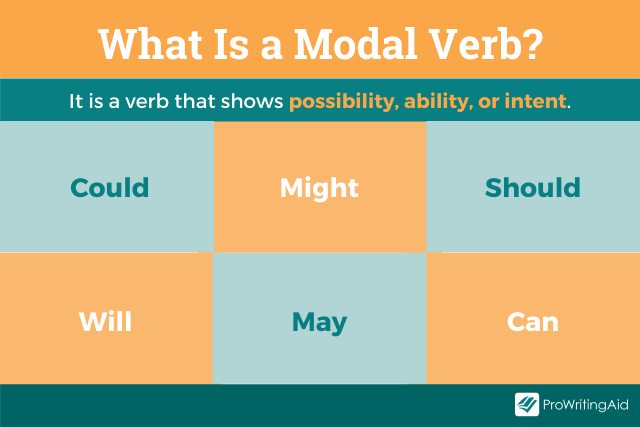 Only certain verbs follow this pattern, including verbs like feel, see, hear, watch, help, let, and make. These special verbs can be conjugated, but it will still follow the format of special verb + direct object + infinitive.

What Are the Three Functions of Infinitives?

We’ve already discussed that infinitives have three functions. They can be nouns, adjectives, and adverbs. But what does this look like? Let's cover each of these in more detail.

How Are Infinitive Verbals Used as Nouns? 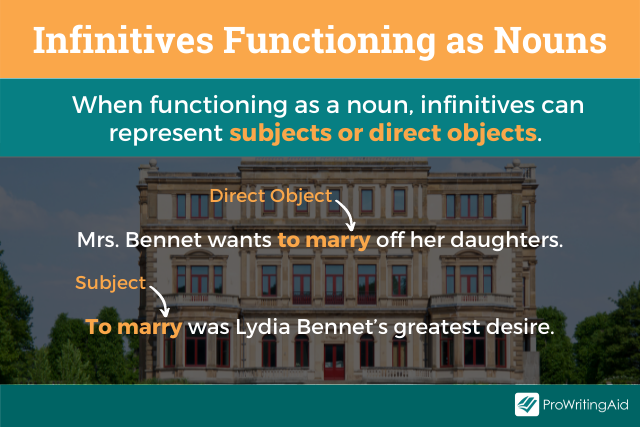 But infinitives can also act like the direct object after certain verbs. They can even act as a subject! Here are some examples where infinitives are functioning as nouns:

We could replace any of those with a noun, and the sentence would still make sense. We could say, "Sarah loves fish" or "The dog wants a nap." We could even say, "Marriage was the only thing Kitty Bennet wanted."

How Do We Use Infinitive Verbals as Adjectives?

Adjectives modify nouns. When an infinitive verb modifies a noun, either an indirect or direct object, it functions as an adjective. 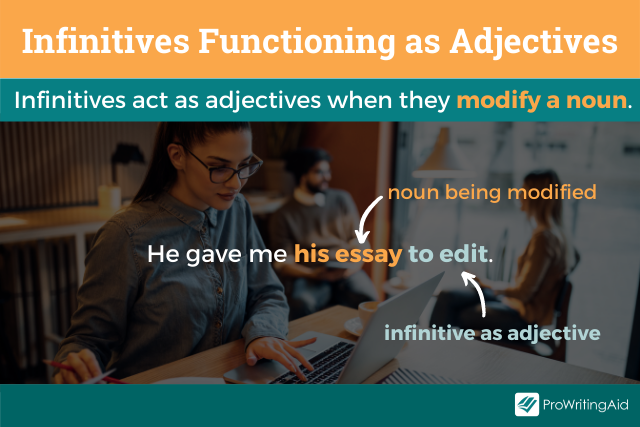 Let’s look at a few examples. Can you identify which noun the infinitives modify?

How Are Infinitive Verbals Used as Adverbs?

An adverb usually describes or in some way modifies a verb. Infinitives are often used as adverbs to explain how, when, why, how much, or where. In other words, the infinitive as an adverb provides more information about the verb it modifies. 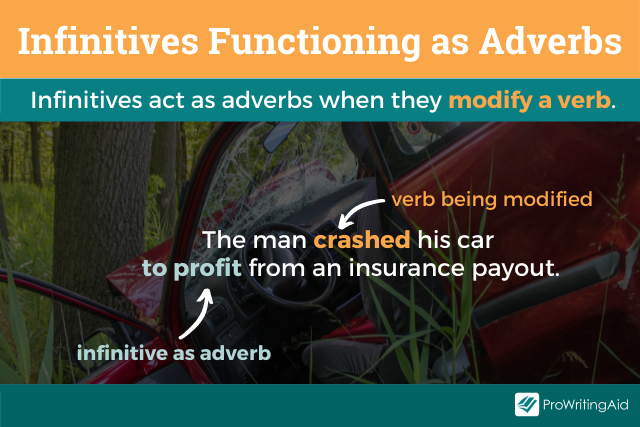 The infinitive might not immediately follow the verb in a sentence, so it’s important to ask yourself if the infinitive is modifying a noun or a verb.

Here are some examples of infinitives that function as adverbs:

In the first sentence, the infinitive comes immediately after the verb that it modifies (pointed). In the second example, the infinitive "to receive" is explaining why the man crashed his car. It is modifying "crashed," not "car," so it’s an adverb. The same is true in the third sentence: "to show" modifies the verb "came."

What Is an Infinitive Phrase?

An infinitive phrase is a phrase that includes an infinitive, along with any other complements or modifiers. These complements and modifiers will include nouns, articles, adverbs, and adjectives. 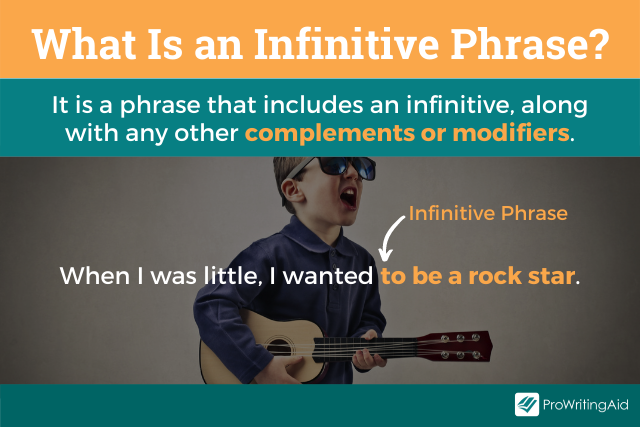 You can read more about infinitive phrases here.

Is It Wrong to Use a Split Infinitive?

When you insert a word or words between the "to" and the infinitive form of a verb, we call this a split infinitive. Split infinitives are always a hotly debated topic in grammar. 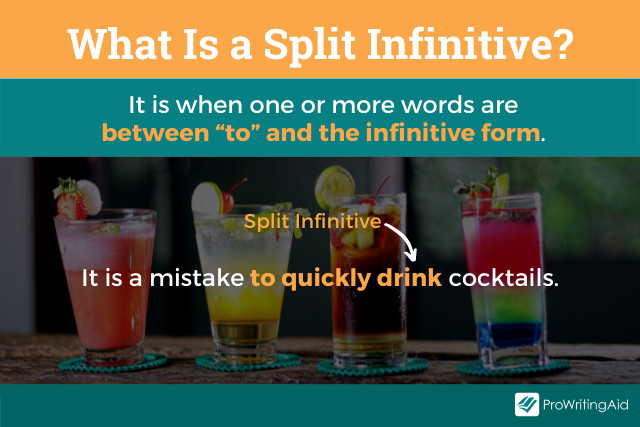 Here are a few examples of split infinitives:

In prescriptive grammar, most consider the split infinitive to be grammatically incorrect. They think an infinitive verb should never be split. However, other people don’t think it’s a big deal to split it. In fact, sometimes a split infinitive just sounds better.

One of the most famous examples of a split infinitive comes from Star Trek. In the opening sequence of the original series and The Next Generation, we hear, "to boldly go where no one has gone before."

To be grammatically correct according to prescriptive grammar rules, the quote should be, "to go boldly where no one has gone before." It just doesn’t pack the same punch.

If you split an infinitive, ProWritingAid can help point it out to you so you can decide if you want to change it. 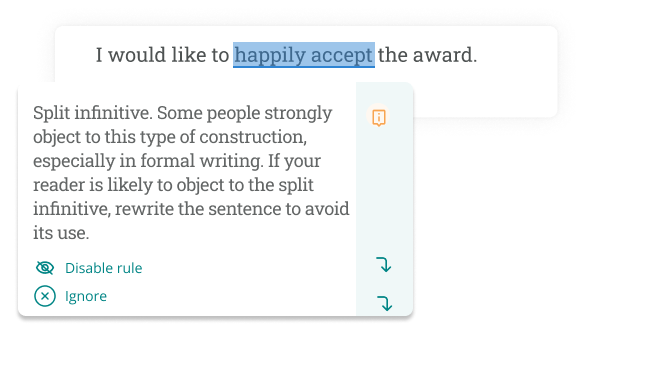 But how do you decide if you should split it?

Let’s take one of our examples from above and remove the split infinitive.

It doesn’t sound like natural English. In this case, leaving the split infinitive "to more than double" is the better option.

But if you are writing something very formal or technical, it’s probably best to remove the split infinitive. Always check your style guides then use your judgment. Remember, good writing is all about clarity.

Infinitives are one of those grammar elements that we use all the time but may not be aware of. We hope you have a better understanding of what infinitives are and how they function in sentences.

25d2dfcafbe9aa0ec435f01486746804@595343prowritingaid.com
I think you mis-parse two examples. 1. In the sentence "They go to the zoo," "go" is not an infinitive: it's the main verb, This would become clear if you changed the subject to "he". 2. In the sentence "He gave me his essay to edit", I think you've missed a common usage of the infinitive. Here, it's not an adjective, as you suggest: you could not replace "to edit" with an adjective. It's a verb form expressing purpose. Finally, an addendum to your discussion of split infinitives. The prescription arose in Victorian times, when grammarians compared English to Latin. Latin infinitives are single (inflected) verb forms: e.g. amo (I love) becomes amare (to love). Because a single word cannot be split, these grammarians argued, we should not split our infinitives. As you have shown, this rule often produces nonsense.