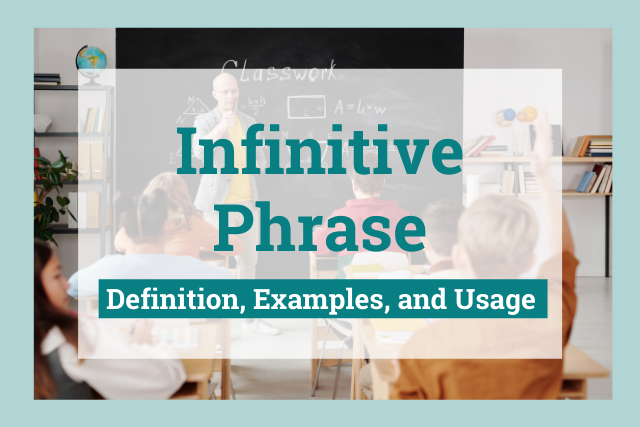 In the English language, we have many sentence elements, and they all have different functions. Infinitive phrases are a type of verb phrase that function as completely different parts of speech.

What Is an Infinitive? 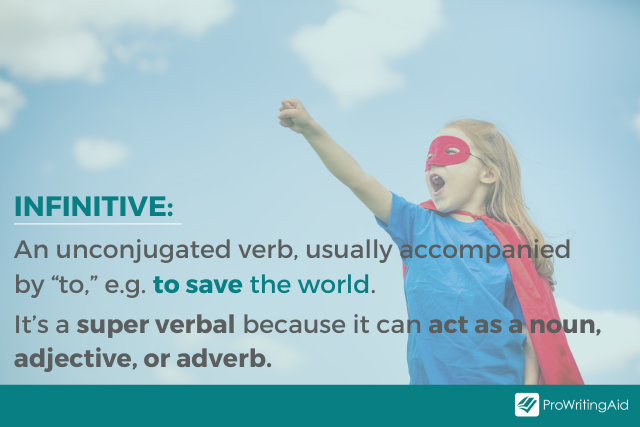 Infinitives are like a super verbal because they can function as a noun, an adverb, or an adjective!

Infinitives are the most basic, unconjugated form of a verb. When you look up a verb in the dictionary, you are looking up the infinitive form. Infinitives are usually paired with the word "to," as in "to play," but this isn’t always the case. We’ll talk more about that later in this article.

Infinitives are an example of non-finite verbs, which means that it will never be the main verb in a sentence. We also never conjugate infinitives by adding different endings. To be an infinitive, it must remain in its original form.

What Is an Infinitive Phrase?

Modifiers make phrases clearer or more specific. In an infinitive phrase, the modifiers might include articles, adjectives, objects, or adverbs. 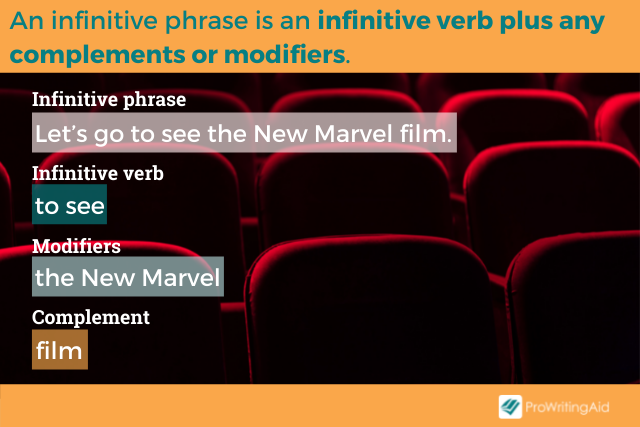 What Are the Infinitive Phrase Functions? 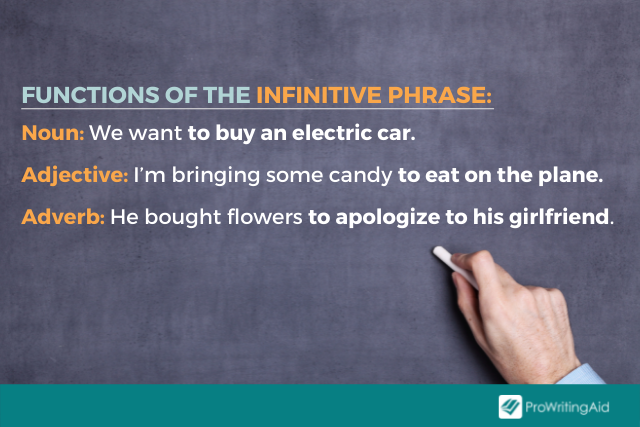 When an infinitive phrase functions as a noun, it can be a subject, an object, or a complement. Here are some examples.

Infinitive phrases can also act as adjectives. An adjective describes or modifies a noun. Let’s see what this looks like.

Why did he buy flowers? In order to apologize to his girlfriend. Why did we go to the concert? To see our favorite band. These infinitive phrases are modifying the main verbs, so they are acting like adverbs.

No matter their function, infinitive phrases will always include an infinitive plus its complements and modifiers.

How Do I Identify an Infinitive Phrase?

An easy way to identify an infinitive phrase is to look for the "to" and see if it’s part of an infinitive verb. Then you’ll look for all the complements and modifiers. But it’s not always that straightforward.

Let’s dive into some exceptions to the rule so you can learn how to identify the infinitive phrase in a sentence.

Can an Infinitive Phrase Have a Split Infinitive? 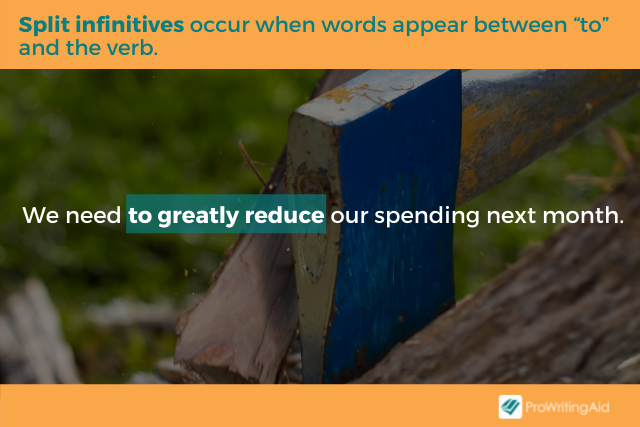 Split infinitives are one of those language features that are technically incorrect but are also perfectly acceptable in most situations. Sometimes an infinitive phrase only makes sense with a split infinitive!

Split infinitives aren’t bad and they can make your infinitive phrases clearer. Try to avoid them in technical writing, but they are acceptable in less formal situations.

Do Infinitive Phrases Always Start with "To"?

Looking for "to" is an easy way to identify an infinitive phrase, but sometimes it’s not there! A bare infinitive is an infinitive without "to." It appears after certain special verbs. 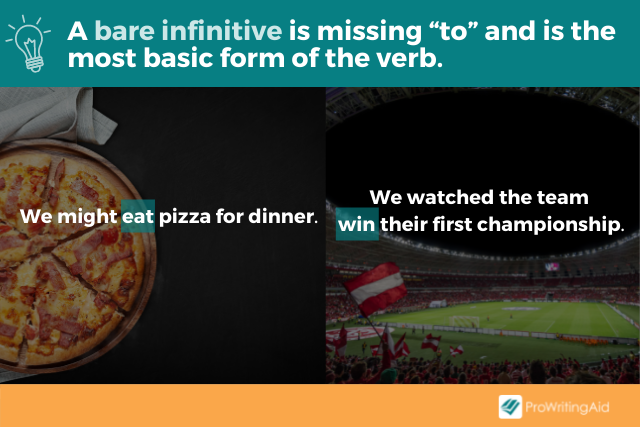 A bare infinitive might follow a modal verb, or helping verb. These include verbs such as may, might, could, can, will, and would. Here are a couple of examples:

A bare infinitive might also come after certain words that are followed by a direct object.

The pattern followed by these phrases is: special verb + direct object + infinitive phrase.

This is what it looks like in a sentence:

What’s the Difference Between an Infinitive Phrase and a Prepositional Phrase? 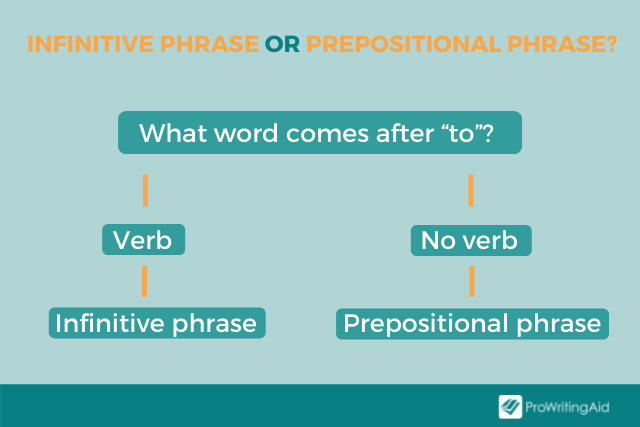 What Are Some Examples of Infinitive Phrases?

Let’s look at a few more examples of infinitive phrases.

Just remember, like any other grammatical construction, infinitive phrases can add variety to your sentence structure.

Good writers avoid falling into dull, repetitive sentence patterns by changing up the structure of their sentences. ProWritingAid’s Sentence Structure Report can help you with your sentence structure variety. 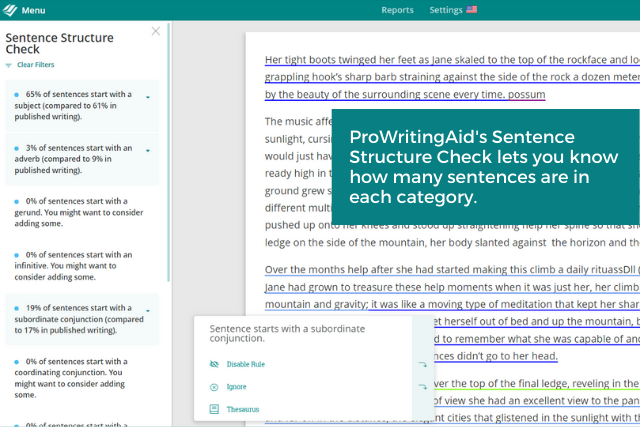 kyle.kucera1
Thank you for your comment! We're glad we could help!

chenhelenintai
Hi! Both Infinitive Phrases and Prepositional Phrases can act as an adjective and modify a noun. For example, the importance of eating healthily and the urge to eat snacks. Can you tell me the differences between these two adjectives? Thank you. Best Regards, Helen

kyle.kucera1
Hey there, Helen. Thank you for your comment! The sentence fragment "the urge to eat snacks" has an infinitive phrase: "to eat snacks." It's an adjective because it's modifying "urge." Eating, as in your other example, is not a verb in this situation. It's a gerund, which is a noun made from a verb with -ing. So, "of eating healthily" does not contain a verb. It contains a gerund and is therefore a prepositional phrase with "of." We hope this helps!