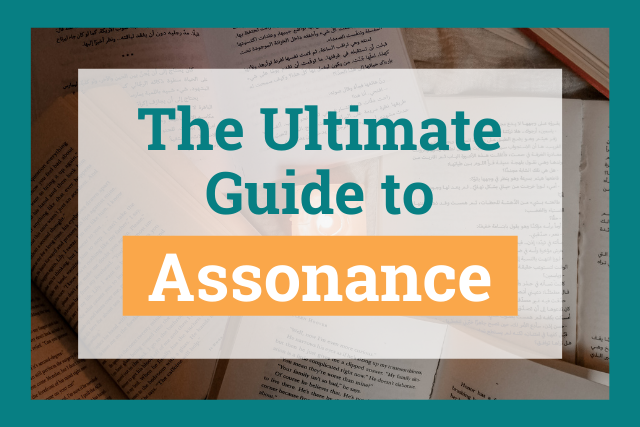 Assonance is a common literary device that deals with vowel sound repetition.

It’s closely related to rhymes, and rhymes usually feature some assonance, but they are not the same thing.

You probably know tons of assonance examples without even realizing. So, what is assonance? Why should we know about it as writers?

Today, we’re taking a deep dive into this often-used but underrated literary device.

Assonance is the repetition of vowel sounds. It comes from the Latin word assonare, which means “to answer with the same sound.”

Immediately, you might think of words like “clock” and “rock,” or “ham” and “jam.” While these are accurate examples, assonance goes much deeper than words that rhyme. 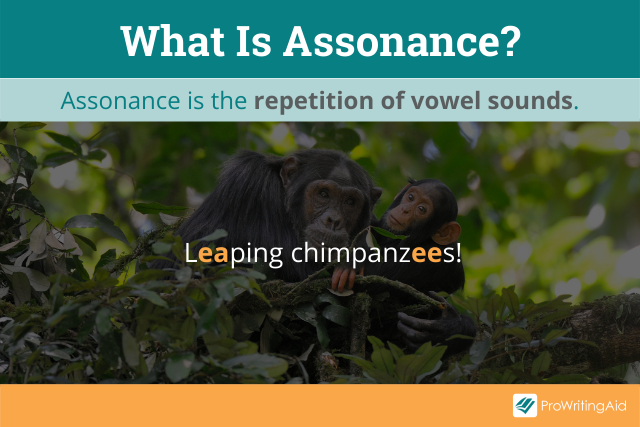 Assonance only requires the repetition of similar vowel sounds, and they can occur anywhere within the words.

The words do not have to have the same consonant sounds, nor do they have to end with the same sounds.

Let’s take a look at some word pairs using assonance:

Each of these examples feature assonance, but they do not have the same consonant sounds.

The first example has assonance of the short /u/ sound. Notice that “some” does not have the letter u. It only has the /uh/ sound.

The second example’s assonance appears in the short /i/ sound. In this case, both “sit” and “Chip” have the same letter, but this is not a requirement for assonance.

In the last example, the two words are longer and the assonance is not in the same syllable.

In real world examples, this is usually how assonance appears. The first syllable of “leaping” and the last syllable of “chimpanzees” use the long /e/ sound.

Assonance doesn’t only appear in word pairs. In fact, assonance often appears in several words within a phrase or sentence.

We’ll cover more in-depth examples from literature and poetry later in this article. For now, you have a working understanding of what assonance is.

Assonance as a Poetic Device

We often think of poetry as rhyming, but non-rhyming poetry is also common. Assonance is one of several poetic devices used in all types of poetry.

There are four common rhetorical devices that involve phonetic sounds. They can all be used together or used separately.

These literary devices are:

To truly understand assonance, you must know the difference between these four terms.

Consonance is the repetition of consonant sounds anywhere in a word (e.g. hacky sack). A written work can contain both consonance and assonance.

Alliteration is the repeating vowel or consonant sounds at the beginning of words (e.g. “To sit in solemn silence”).

Rhyme is when two or more words end in assonance or consonance (e.g. laughter in the rafters).

Note that with assonance, as well as the other literary devices mentioned, it’s the consonant or vowel sounds that are important, not the exact same vowels or consonants.

In other words, any long /a/ sound that repeats is assonance, whether it’s an /ay/ or an /a-consonant-e/ pattern, as in “gray” and “pace.” 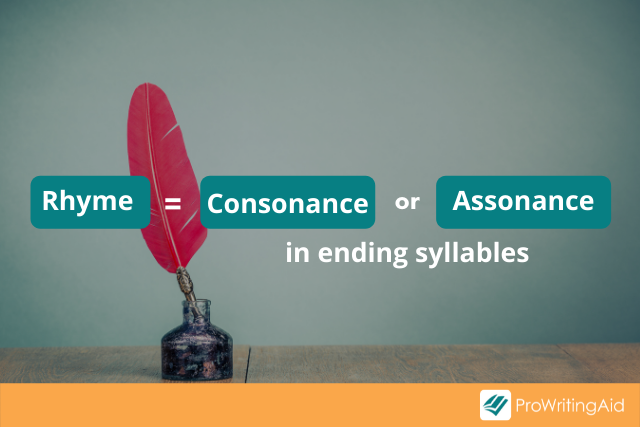 Here are two assonance examples in poetry. The emphasis is added to show the occurrences of assonance.

Dear to the moss,

Known by the knoll,

Next to the robin

In every human soul.

Assonance is often thought of as a less common device in literature.

Truthfully, however, it appears accidentally all the time. That’s because writers often create sentences that sound good without paying attention to why!

Here are a few assonance examples in literature.

This first example is from Portrait of the Artist as a Young Man by James Joyce. He uses the short /i/ sound repeatedly. How many instances can you count in this sentence?

Soft language issued from their spitless lips as they swished in low circles round and round the field, winding hither and thither through the weeds…

In this example from To Kill a Mockingbird, Harper Lee uses the repetition of the short /e/ sound, then switches to consonance:

When he was nearly thirteen, my brother Jem got his arm badly broken at the elbow. 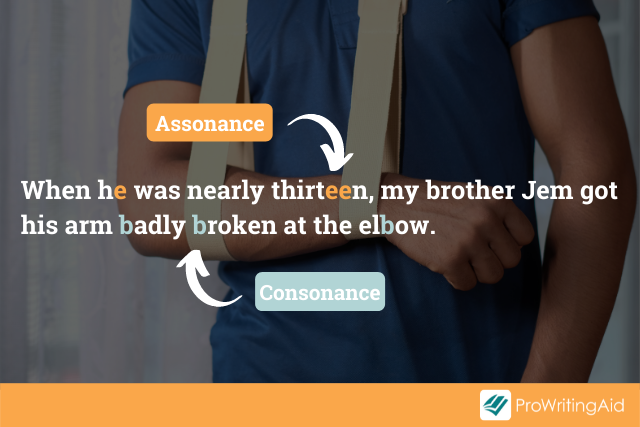 Here’s an example of assonance from William Faulkner’s Absalom, Absalom! that uses the repetition of the short /o/.

I never heard before of a ship so well furbished with battle tackle;

No wise man in hall or weathered veteran;

Asleep from their feasting;

They wept to heaven…

Beowulf is famous for its cadence and sounds, and this translation uses assonance to mimic the original sounds of Old English.

Examples of Assonance in Sentences

Let’s take a look at some common sayings and proverbs that include assonance to make them memorable, without resorting to rhyme. 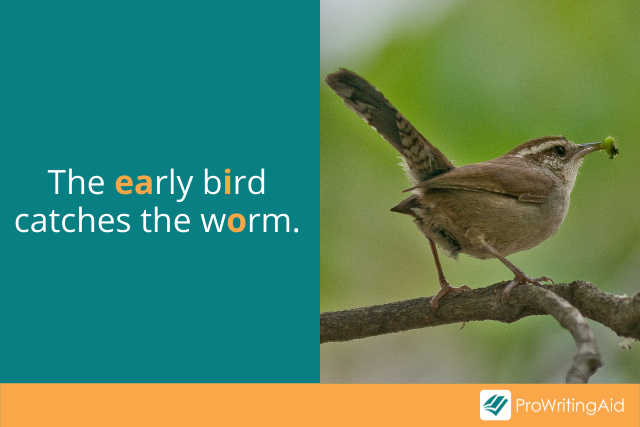 Also, notice that not every word has to include the same assonant vowel sound.

Depending on how you pronounce “the,” three to five of the six words in the first example use assonance. In the second example, only “early,” “bird,” and “worm” use assonance.

Assonance was a common rhetorical device in Old English. The literature during this era was lyrical and songlike.

We still use assonance today for the same reasons, although often with less intention.

Assonance serves several purposes in writing. First, any sort of repetition of sounds, whether it’s assonance, consonance, alliteration, or rhyme, adds emphasis to our sentences.

If you are looking for a way to emphasize something, can you add some assonance to your work? Open your thesaurus and find some synonyms to add a little lyrical flare.

Or, speed up the process by using ProWritingAid’s Thesaurus Report. 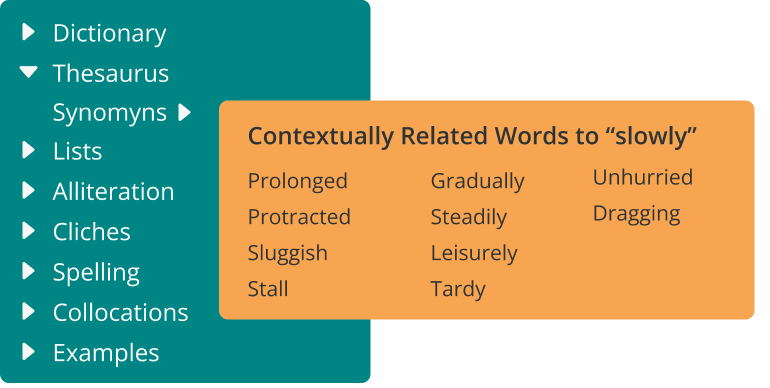 When you run the report, you can hover over any adjectives, verbs, nouns, or adverbs in your text to see contextually relevant synonyms.

Assonance can also speed up or slow down a sentence, depending on the length of the words and sentences you are using.

This means that with some repetitive vowel sounds, you can impact the pacing of your writing. Check out ProWritingAid’s Pacing Tool for more ways to improve your pacing.

Most importantly, assonance is memorable because it affects the rhythm of writing. Challenge yourself to add some assonance to your own work! It can be a lot of fun.