Tautology is a literary device whereby writers say the same thing twice, sometimes using different words, to emphasize or drive home a point. It can be seen as redundancy, a style fault that adds needless words to your idea, statement, or content; or it can be defended as poetic license. Let’s look at what makes tautology acceptable or utterly unacceptable. 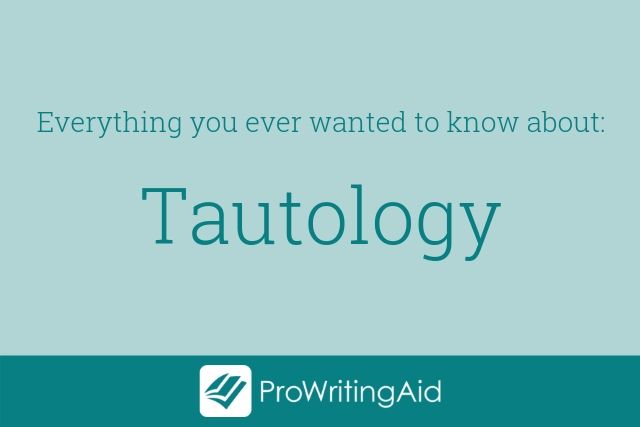 Where does "tautology" originate?

Tautology comes from the Greek word tauto which means "the same" and logos which means "a word or idea." When combined, tautology refers to a phrase, paragraph, or sentence that either reiterates the same idea but in different words or repeats the meaning while appearing to provide new information. In inexperienced hands, tautology merely adds unnecessary words while adding no substance to your writing. But literary talents like Shakespeare, Edgar Allan Poe, and T. S. Eliot use tautology to focus readers’ attention through repetition.

Orators, writers, and others strategically use tautology in everyday life, when writing poetry, literature, or song lyrics, and even in debates. Each scenario has a different reason to use tautology. Here are the most common reasons people use this literary device:

Sometimes, however, tautology results from an inexperienced, unskilled speaker or writer.

Some experts say tautology is the same as repetition, which in today’s environment is a no-no. You want to state your idea clearly and succinctly and not repeat it using different words. Nowadays, this is a sign of incompetence or unpreparedness. With the massive amounts of content available online, you must be concise, saying only once what you mean.

Others feel tautology differs from repetition because it is a tool writers or orators can use to underscore their meaning. It’s another way for their audience to look at their ideas and find meaning. It’s a case-by-case decision whether tautology is powerful or redundant.

Examples of tautology in literature

Shakespeare and Edgar Allan Poe used tautology to underscore the impact of their ideas. For example:

Shakespeare uses tautology in the following example to show Hamlet’s derision for what he’s doing.

Polonius is actually famous for using words. Hamlet feels he is lost in too many words and responds derisively.

The Bells by Edgar Allan Poe

Poe uses tautology often in his stories and poems to emphasize his meaning and give a kind of rhythm to his work. Here’s a great example:

Whether reading aloud or in your mind, Poe’s use of tautology highlights readers’ awareness of how the bells sound.

Eliot uses tautology in the following example as a technique to focus readers’ attention on a specific thought or idea.

Actually, the Bible is famous for tautology as ambiguity. Here are two examples:

At ProWritingAid, we recommend you avoid using tautology in your work because modern readers want to avoid monotony and repetition. Your work should be short and to-the-point so your readers can grasp your meaning and move on quickly.

To easily find repetitious and redundant phrases in your work, try ProWritingAid’s Clichés Report. Not only does it find unoriginal clichés in your work, but it points out redundancies. It gives you the opportunity to change redundancies so you don’t bore or, worse, lose your audience.

AllegoryAnaphoraAntithesisAssonance: The Ultimate GuideClichesConsonanceEuphemismHubrisHyperboleIdiomsMetaphorsMetonymyOnomatopoeiaOxymoronSimilesSynecdocheTautologyWhat Is Irony? Types, Examples and Meanings