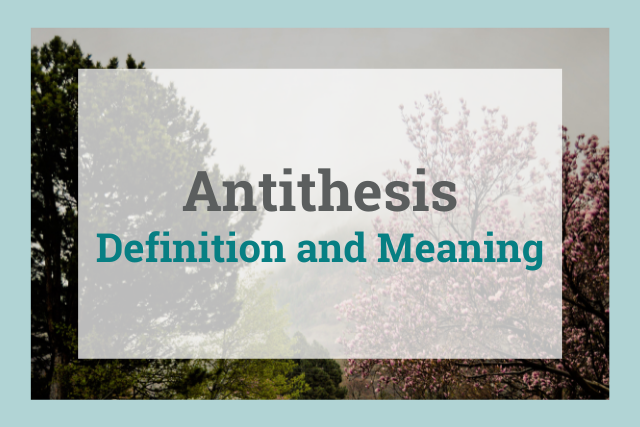 Well, antithesis isn’t actually the worst. Antithesis means “opposite.” It is a powerful rhetorical device, but it can be difficult to understand and even harder to spot in writing.

Fear antithesis no more! Today we’re breaking down everything you need to know about this literary device, including what it is, how it’s used, and where you can find examples of it.

Antithesis is a literary device, but it’s also a word used in contexts outside of literature. Before we understand how it’s used in literature and rhetoric, we need to understand its dictionary definition.

Merriam-Webster defines antithesis as “the direct opposite.” What does this mean in a real-life setting? 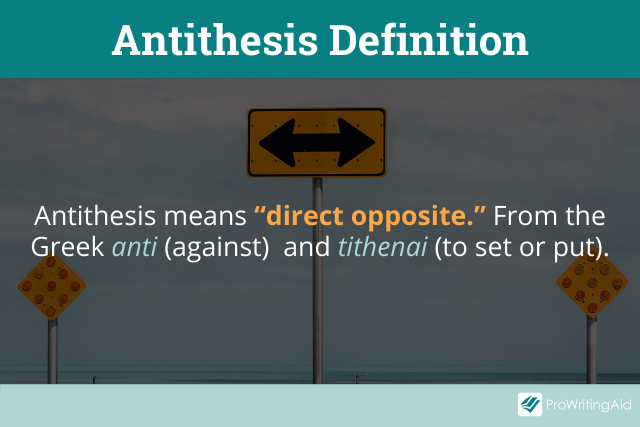 Let’s say you meet someone on a dating app who is the exact opposite of everything you want in a partner. You might say they are “the antithesis of who I thought I’d end up with.”

Antithesis comes from the Greek word antitithenai, which means “to oppose.” The root tithenai means “to set or put,” while anti originally meant “against.”

The meaning of antithesis as a literary term is more nuanced and specific, however. It’s more than a matter of two things that are exact opposites. Let’s take a look at what antithesis means in terms of literature and rhetoric.

Antithesis Definition in Literature and Poetry

As a literary device, antithesis is two contrasting ideas juxtaposed against each other using parallel sentence structure. We’ll talk more about what parallel structure is in a later section.

The contrasting ideas in antithesis do not need to be the exact opposite of one another, but they do need to be dissimilar enough to show opposition. Here’s an example from Shakespeare’s Hamlet to illustrate this idea.

“Give every man thine ear, but few thy voice.” 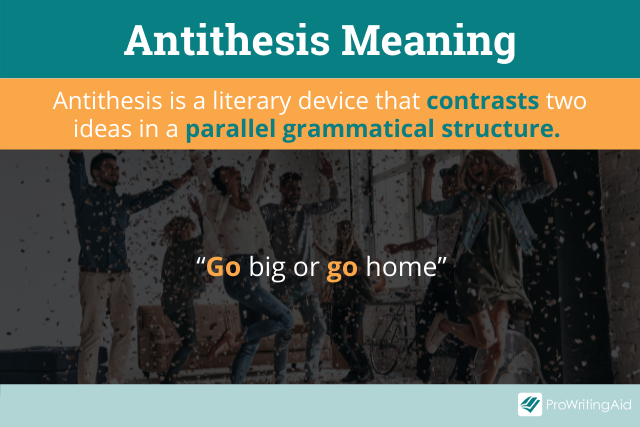 The contrast, as well as the parallel structure, often creates a rhythmic statement that sticks in a reader’s mind. This helps draw emphasis to important ideas.

Let’s look at this figure of speech: “Go big or go home.”

“Big” and “home” aren’t direct opposites. But the antithesis helps us understand that the opposite of doing something big is just sitting at home. Plus, it’s a catchy phrase, so it sticks with us.

Parallel structure is the repetition of a grammatical structure in a phrase. It’s used with many different types of literary devices, such as anaphora and epistrophe.

Parallelism isn’t necessarily repeating words. Instead, you are repeating a structure. This might mean word forms, like infinitives or gerunds, or patterns of words.

Here’s a common proverb that illustrates the parallel structure of antithesis: “Where there’s a will, there’s a way.”

The parallelism is the pattern of “there’s a [blank].” The opposing ideas are “will” and “way.” One is something you desire, the other is how it happens. Together, this forms an example of antithesis.

You have probably encountered antithesis regularly without even knowing it! Many clichés, proverbs, and figures of speech are examples of antithesis.

Antithesis is a powerful tool in writing, but beware of overused examples. Clichés, like some of the examples below, can make your writing feel contrived and dull. Use ProWritingAid’s Clichés Report to find overdone antitheses.

Here are some everyday examples of antithesis.

Antithesis isn’t just for proverbs and clichés, however. Many great writers and speakers use antithesis.

Antithesis is often used in literature, and there are many excellent examples of it. Let’s look at a few of the most famous antithesis quotes from prose, plays, and poetry.

“Here at least/We shall be free; the Almighty hath not built /Here for his envy, will not drive us hence:/Here we may reign secure, and in my choice/To reign is worth ambition through in Hell:/Better to reign in Hell, than serve in Heaven.”—John Milton, Paradise Lost

Milton uses several examples of parallelism in this quote, and the last line uses that repetitive structure to create antithesis.

Here’s another great example. How many examples of antitheses can you spot in this quote? 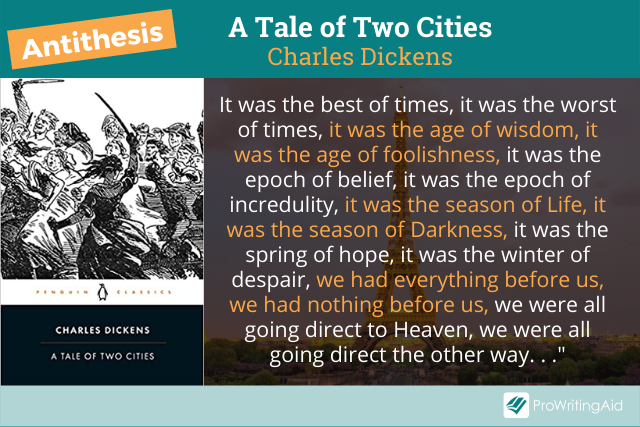 The opening line of this novel has seven examples of antithesis!

“To be, or not to be, that is the question:/Whether ’tis nobler in the mind to suffer/The slings and arrows of outrageous fortune,/Or to take Arms against a Sea of troubles,/And by opposing end them.”—William Shakespeare, Hamlet

The opening line of this soliloquy is an example of antithesis. He also uses contrasting ideas in the next lines, where he pits suffering in fortune against fighting his suffering.

Throughout history, many famous people have used antithesis. Let’s check out a few examples.

“The world will little note, nor long remember what we say here, but it can never forget what they did here.”—Abraham Lincoln, The Gettysburg Address, 1863

Lincoln uses two antithesis back to back in his speech after the Battle of Gettysburg. First, he contrasts the idea of “little note” with “long remember.” Then he contrasts “what we say” with “what they did.”

“We must learn to live together as brothers or perish together as fools.”—Martin Luther King, Jr., St. Louis, 1964

Dr. King also uses two examples of antithesis in this quote from his speech in St. Louis, Missouri. He contrasts living with perishing, and brothers with fools. 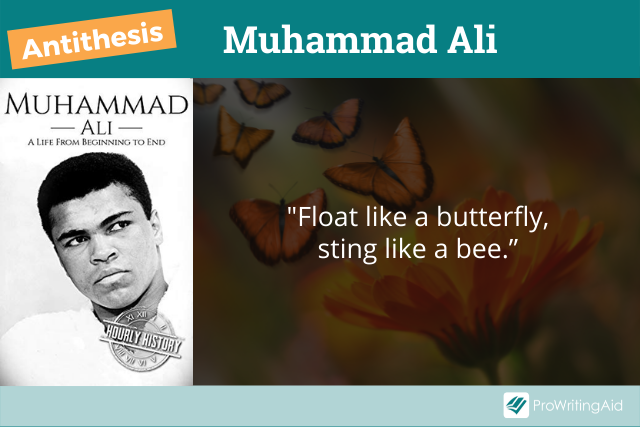 The world-famous boxer Muhammed Ali used this antithesis to describe his fighting style. Floating like a butterfly and stinging like a bee are very different, yet it’s how he became a world champion!

Conclusion: Antithesis Is the Literary Term for Opposite

In short, antithesis is the idea of contrasting two opposing ideas, whether as words or phrases, with a parallel structure in writing. It’s a powerful literary device when done well, and can explain and emphasize complicated concepts in a lyrical way.