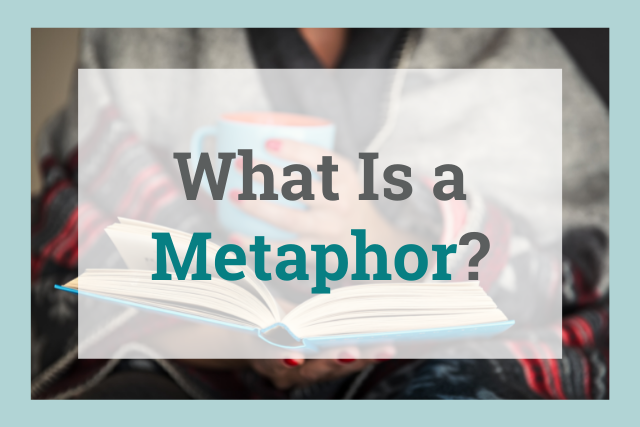 A metaphor is a figure of speech that describes something (an object or an action) in a way that isn’t literally true, but uses comparison or symbolism to describe something. Metaphors are a great way to add more color to your writing!

Metaphors show up all over the place, especially in poetry and literature. They help writing come alive and can enhance your work by creating vivid imagery.

In this metaphor, love is compared to a battlefield. This simple phrase shows that love can be very challenging – even deadly!

This metaphor shows that the person being addressed is a positive influence in the speaker’s life.

As much as it may feel like it, your heart isn’t ever actually broken – you’re just feeling a lot of pain.

Aristotle said a metaphor was “the act of giving a thing a name that belongs to something else.” It allows you to pack a powerful punch in a few words. Your reader can take their full understanding of one thing and apply it to another thing. By writing, “my cubicle is a prison,” your reader understands how you feel about your job. With just that one word they know you feel trapped, unhappy, desolate.

Think of some of the most famous metaphors and how full they are of meaning.

You probably already use metaphors in your everyday language without a second thought:

Metaphors enliven ordinary communication. You’re so used to seeing the same words and phrases over and over again that when someone comes out with a brilliant metaphor, we all perk up and take notice. It is an art form and you should practice often to get good at it.

This is a metaphor that’s sustained for more than just a word or phrase.

This is using a metaphor in a less direct manner.

Be careful when using mixed metaphors. Used correctly, they can be quite humorous. Used unconsciously, they’ll detract from your writing enough that your reader will put the book down.

These are the clichés of metaphors, those that have been used too often and have lost their punch.

Don’t use dead metaphors. Find another, more clever way of saying something is as white as snow or has a heart made of stone. To root out dead metaphors in your work, make sure to use our Clichés and Redundancies Check.

Note: Metaphors aren’t similes. A simile is comparing something using the words like or as:

How to create fantastic metaphors.

Metaphors let your creativity and imagination loose. Here are steps you can take to help you create a fantastic metaphor.

1. Choose a character, object, or setting.

Say, for example, you’re going to write a metaphor about a soccer goalie. What are a goalie’s defining characteristics? A goalie should be stalwart in the face of oncoming offense. Goalies should be a wall that stops someone from scoring. When you think about your character, object, or setting, think of it with all of your senses (e.g. sight, sound, smell, etc.).

Identify its characteristics. Let’s say our goalie is in the championship game facing his arch nemesis. And let’s say the nemesis is a large, physical specimen. What is the mood you’re trying to set here? Keep that in mind while describing your scene.

3. Now think of some other objects that share characteristics you identified in Step 1.

Keep in mind how the specific situation reveals your character. Is our goalie situation like David vs. Goliath? No, that’s been done too many times. Perhaps the goalie is like a baby seal with a deadly shark circling closer and closer. No, that’s not in character with who we want our goalie to be. We want him stalwart in the face of his opponent. How about comparing the goalie to unexplored ocean depths? That might give you plenty of character ideas about your goalie and his deeper thoughts and ideas.

4. Take your metaphor and expand on it.

It’s not enough just to compare the goalie to the ocean deep; emphasize it beyond a single word to create an image that rounds out the specific characteristics.

The goalie, pressured from all sides with unrelenting force, slipped deeper into his pocket, finding swells below the surface that buoyed him along and kept him focused on the predator that was descending.

Okay. That’s one option off the top of my head. You can probably do better!