Juxtaposition is a literary technique that places two distinctly dissimilar things side by side to bring out their differences.

What Does Juxtaposition Mean?

Whether you write essays or novels, you can make your writing more powerful by using the literary technique of juxtaposition.

Juxtaposition means placing two unrelated things next to each other to highlight their differences.

This technique is a subtle way to encourage the reader to compare and contrast two or more elements in a story: characters, settings, events, moods, and more.

What Is the Purpose of Juxtaposition in Literature?

Juxtaposition is usually used to accomplish one or more of the following things:

Let’s explore each of these goals in detail. 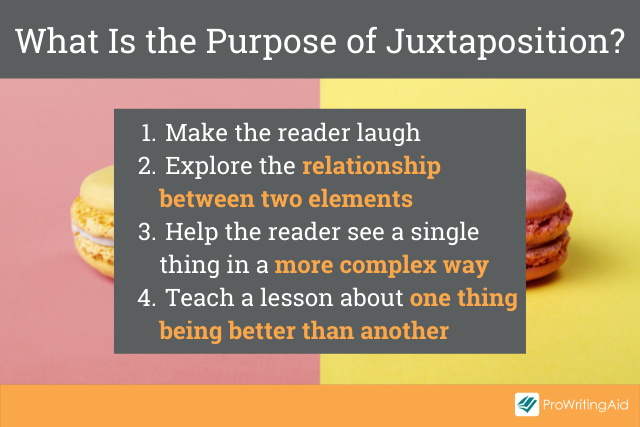 Juxtaposition That Makes the Reader Laugh

Sometimes, juxtaposition can be funny or absurd.

You can use this type of stark contrast to add an element of humor to your writing.

Juxtaposition That Explores the Relationship Between Two Elements

By bringing two dissimilar things together, you can show the reader how those two elements interact with one another.

Maybe the two unrelated ideas clash and create fertile ground for conflict. Or maybe they complement each other, each making up for what the other lacks.

One common example of juxtaposition in literary settings is the rural-urban divide.

Showing a character travel from the city to the countryside, or vice versa, helps us understand how each one complements the other.

Sometimes, juxtaposition can help the reader see a single thing in a more complex way.

Showing two sides of a single character is a common way to add complexity to their personality.

For example, you might create a grumpy character who frightens all the kids in his neighborhood, but who is also exceptionally kind to the stray cat he feeds every morning.

Those two contrasting traits help the reader to see him as a three-dimensional character. 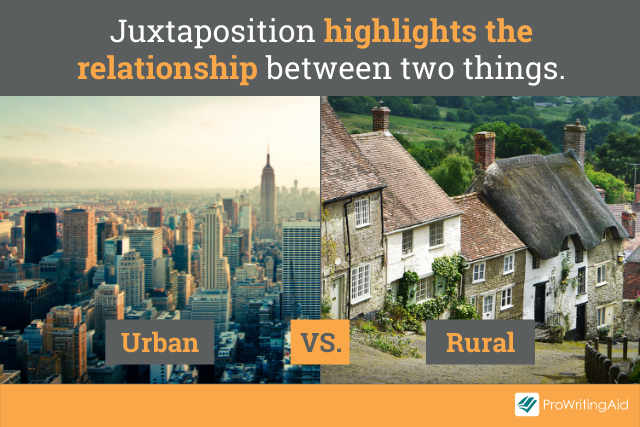 Juxtaposition can also be used to impart a lesson about one thing being better than another.

Many fables famously utilize this type of juxtaposition. Aesop’s fable of the tortoise and the hare is a juxtaposition of a lazy animal with a hardworking one.

This contrast teaches children that “slow and steady wins the race.”

This type of juxtaposition is also common in action and adventure stories.

By showing good and evil side-by-side, the author makes the good guys look like the right side to root for, even when they do morally grey things in the name of their cause.

What Are the Different Types of Juxtaposition?

Juxtaposition refers to any type of contrast created between different things when placed side by side.

Because this is such a broad concept, there are many other literary terms that refer to specific types of juxtaposition.

Are Oxymorons and Juxtaposition the Same?

When two contradictory words are used side by side, it’s a specific type of juxtaposition called an oxymoron.

For example, when Juliet says “Parting is such sweet sorrow,” the word “sweet” is juxtaposed with the word “sorrow” to show the complexity of her love—it makes her happy and sad at the same time. 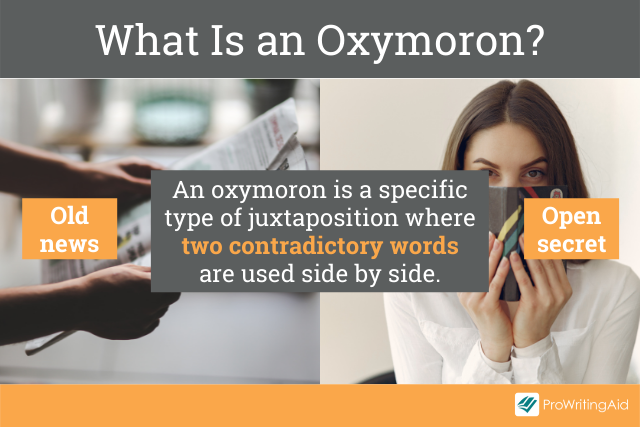 Are Character Foils a Type of Juxtaposition?

The term character foil refers to juxtaposition used between two characters whose personalities or backgrounds are starkly dissimilar.

This technique helps make each character come alive for the reader.

For example, Cinderella’s kindness is made more obvious by the fact that her stepsisters are selfish and cruel. 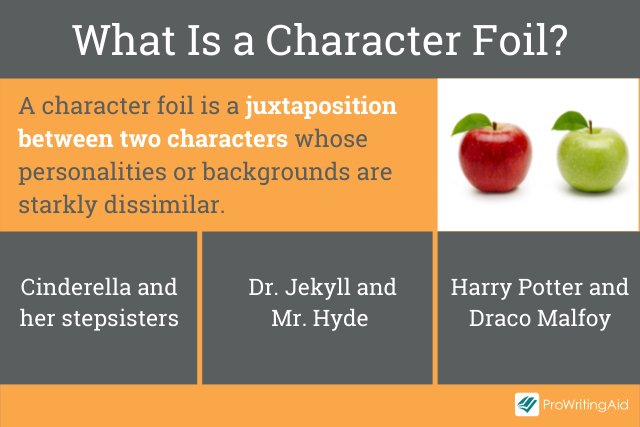 Antithesis refers to the juxtaposition of two complete opposites. This is the most overt form of juxtaposition, because it relies on pairings we're all familiar with.

Here are some common examples of antithetical pairings that are often used in literature: 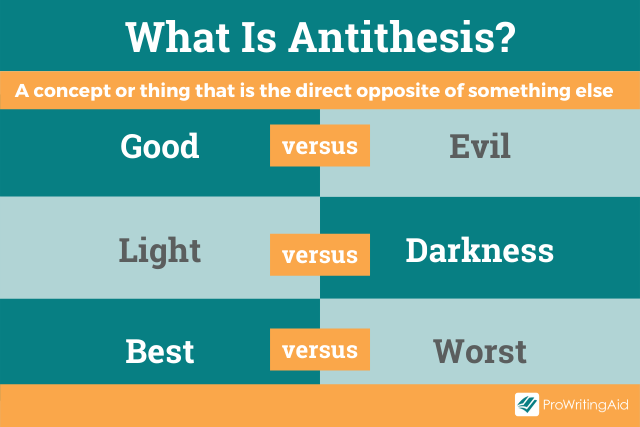 What Are Some Examples of Juxtaposition?

Let’s take a look at some examples of how some successful authors have used juxtaposition in their novels.

A Tale of Two Cities by Charles Dickens 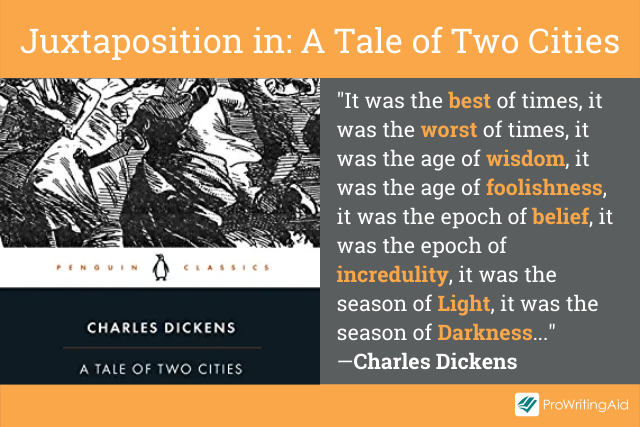 In this opening paragraph, Charles Dickens shows the inequality in society before the French Revolution by contrasting the way different people experience the time period.

This passage is perhaps the most famous example of juxtaposition in literature. The entire novel is full of pairs and doubles, even the title itself.

When including juxtaposition in your writing, it can be hard to think of interesting synonyms and antonyms. This is where ProWritingAid’s Word Explorer can help. 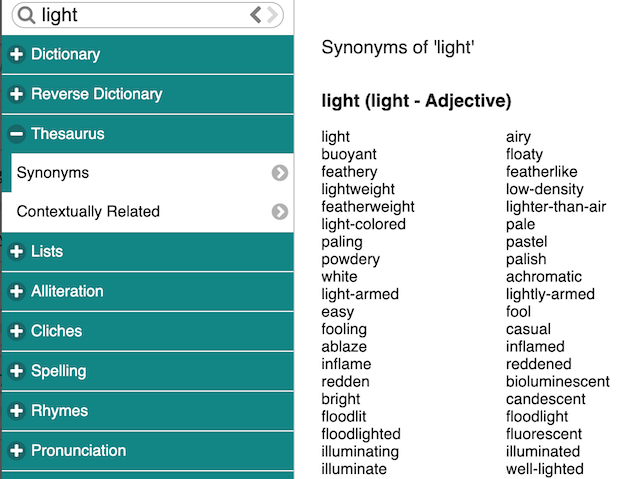 Of Mice and Men by John Steinbeck

The first man was small and quick, dark of face, with restless eyes and sharp, strong features. [...] Behind him walked his opposite, a huge man, shapeless of face, with large, pale eyes, and wide, sloping shoulders...

This paragraph introduces Lennie and George, the two protagonists of the story. It’s clear right away that they’re complete opposites.

Physically, this passage shows that one of these men is small and sharp, while the other is large and shapeless.

John Steinbeck will continue to juxtapose their personalities throughout the story: Lennie is innocent, while George is jaded. 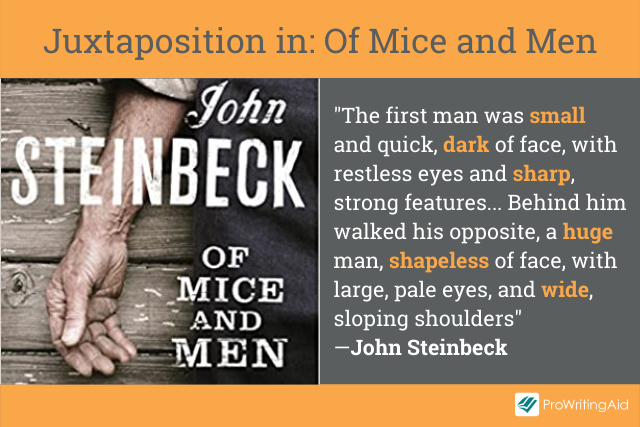 The Hunger Games by Suzanne Collins

Chicken and chunks of orange cooked in a cream sauce laid on a bed of pearly white grain, tiny green peas and onions [...] I try to imagine assembling this meal myself back home. Chickens are too expensive, but I could make do with a wild turkey. I’d need to shoot a second turkey to trade for an orange. Goat’s milk would have to substitute for cream. We can grow peas in the garden. I’d have to get wild onions in the woods.

This passage describes Katniss eating a lavish meal in the Capitol after having spent most of her life starving in District 12. Collins uses juxtaposition to show how much inequality there is in Panem. 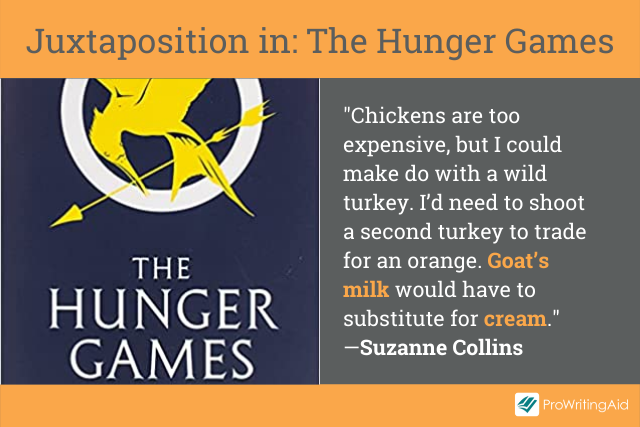 I opened up the Schumann book to the dark little piece I had played at the recital. It was on the left-hand page, “Pleading Child.” It looked more difficult than I remembered. I played a few bars, surprised at how easily the notes came back to me.

And for the first time, or so it seemed, I noticed the piece on the right-hand side. It was called “Perfectly Contented.” I tried to play this one as well. It had a lighter melody but with the same flowing rhythm and turned out to be quite easy. “Pleading Child” was shorter but slower; “Perfectly Contented” was longer but faster. And after I had played them both a few times, I realized they were two halves of the same song.

This passage in The Joy Luck Club is a fantastic example of juxtaposition.

The two musical pieces the daughter plays feel very different from each other, until she realizes they’re two halves of the same song.

It’s a subtle way to create a deeper understanding of how each woman views the other. 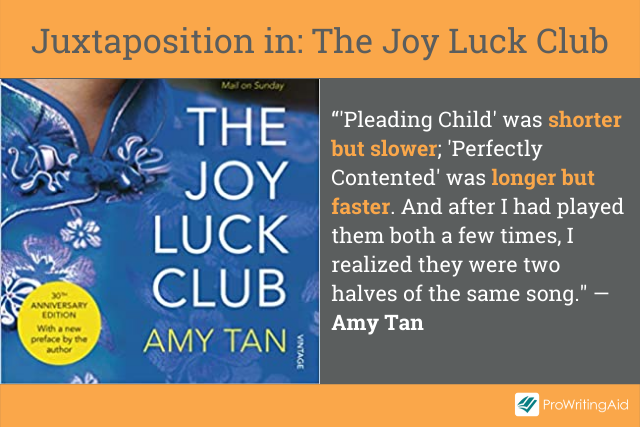 Strange the Dreamer by Laini Taylor

The alchemist and the librarian, they couldn’t have been more different—as though Shres, the bastard god of fortune, had stood them side by side and divided his basket of gifts between them: every gift to Thyron Nero, one by one, until the very last, which he dropped in the dirt at Lazlo’s feet. To Thyron Nero: birth, wealth, privilege, looks, charm, brilliance. And to Lazlo Strange, to pick up and dust off, the one thing left over: honor.

We already know that Thyron Nero is a golden boy who has everything he could ever need, and that Lazlo Strange is a poor orphan who has nothing but honor.

When we see them side-by-side, however, this becomes even clearer, and sets up their relationship for the story to come. 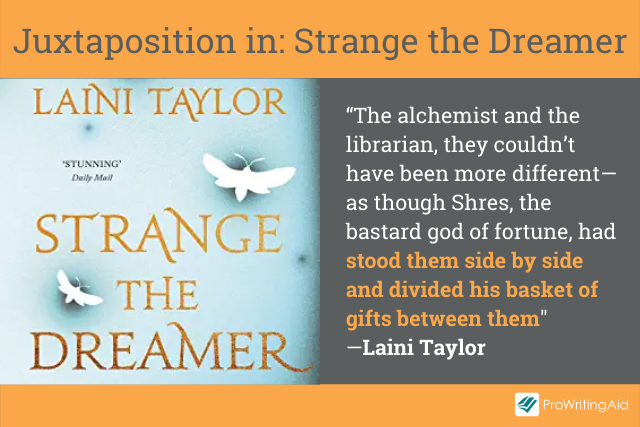 Using juxtaposition in your writing can help create contrast that engages your readers and makes them think.

What are some examples of juxtaposition you’ve seen in your favorite books? Let us know in the comments.