Should I use spaces around an em-dash? 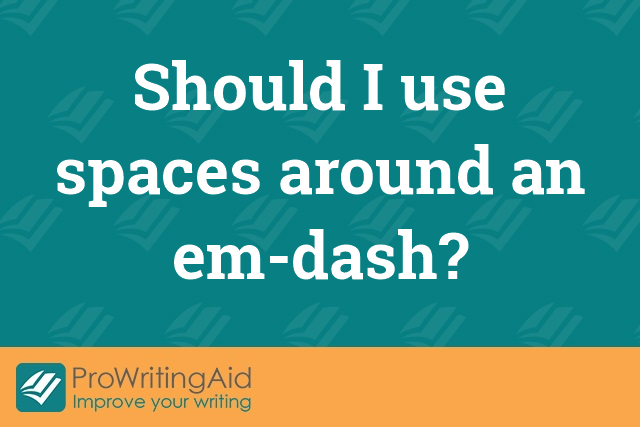 An em-dash is a punctuation mark which is used alone to indicate a pause in speech or in pairs to take the place of commas. The name comes from the fact that, in tradtional typesetting, the dash is the same width as a capital M.

Most writers (and style guides) use the em-dash without spaces on either side.

He was travelling very quickly—the trees were a blur through the window—but the train showed no sign of slowing down.

Most newspapers, however, follow the AP style guide, which recommends a space on either side. This is because newspaper columns are narrow and having the spaces helps with the layout of the text.

Her speech on the economy — delivered in front of a crowd of 10,000 supporters — was the highlight of the conference.

So, we suggest that you choose which style to follow depending upon the type of writing. The most important thing is to be consistent!

Hyphen
The use of parentheses

Hyphen
Formal and Informal Words (in the English Language)

Hyphen
How can I fix spelling mistakes in my writing?

Hyphen
How to Use ProWritingAid’s Tone Detector

Hyphen
What is a spelling mistake?

Hyphen
What is passive voice and how can I change it to active?

Hyphen
What is a sentence fragment?

Hyphen
US spelling vs UK spelling

Hyphen
Should you use a comma before "while"?