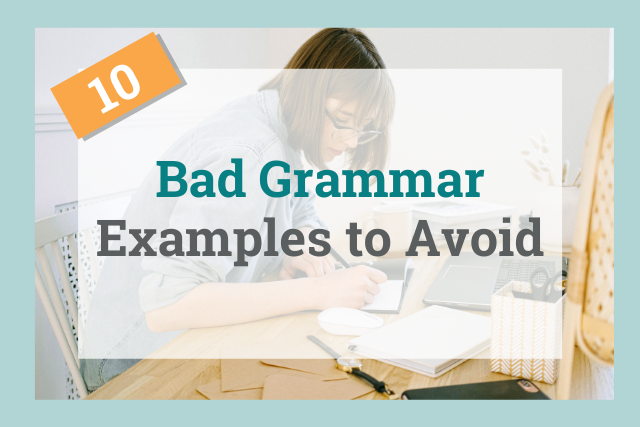 What are the worst grammatical errors you can make? Keep reading to check out our top ten bad grammar mistakes.

Why should you care about using correct grammar? The written language is one of the major ways we communicate our ideas.

Grammar is a set of rules and guidelines that make our writing clear and standardized. Good English grammar helps us portray our thoughts, opinions, and ideas in a logical way that everyone can understand.

Improper grammar leads to miscommunication. Good grammar is important for communicating ideas in academic writing, in the workplace, and in creative writing.

What are some of the most common grammar mistakes? Let’s dive into the top ten examples of bad grammar.

One of the worst grammatical errors is incorrect subject–verb agreement. It’s important to make sure that the subject and the verb go together. 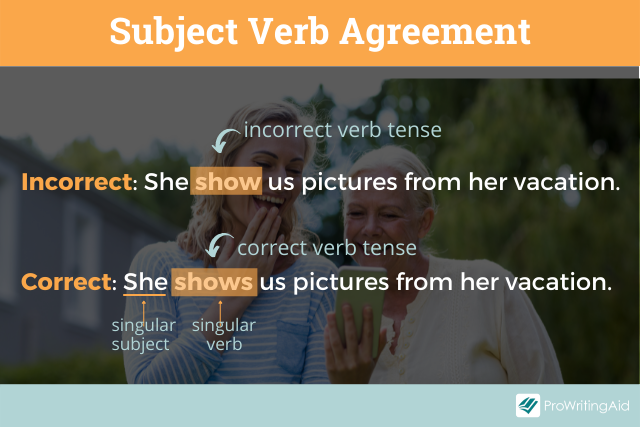 You can think of it like a matching game. Always use plural verb forms when your subjects are plural nouns. When the subject and the verb match, they agree. When they don’t agree, it doesn’t look or sound right to the reader.

Let’s take a look at a few examples.

Things get trickier with the verb be. First person, second person, and third person singular are all written differently. 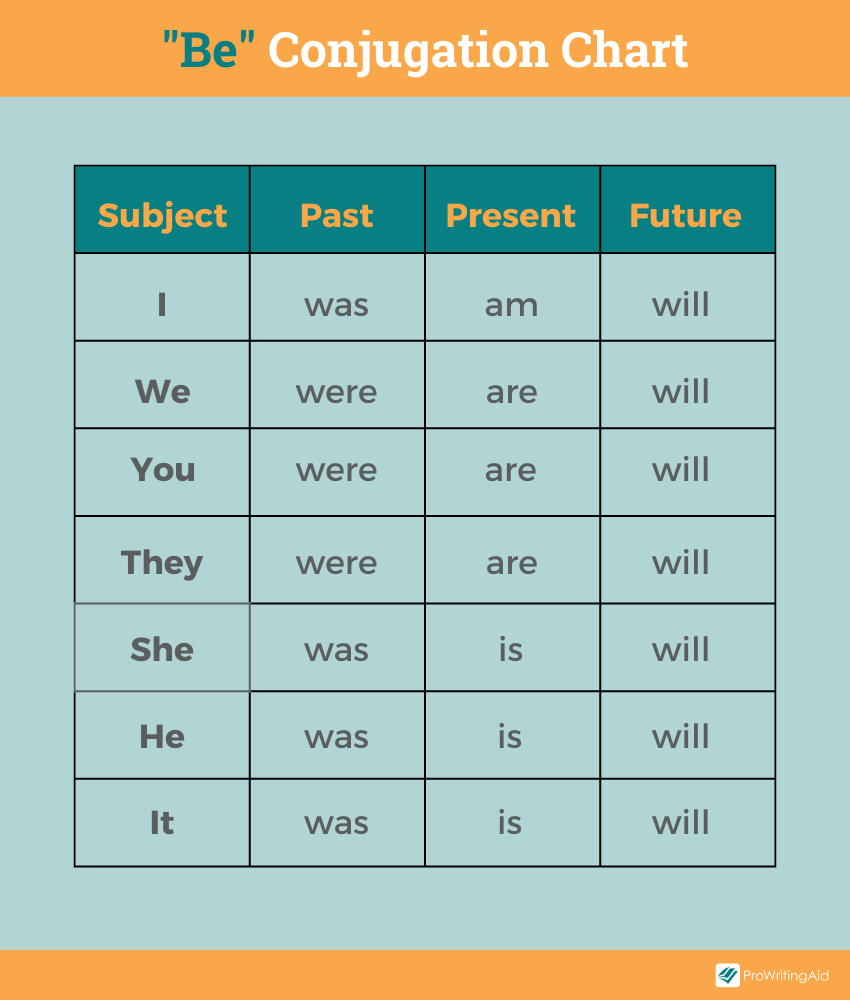 Here are some examples.

Subjects and verbs aren’t the only things that need to agree in English! Another bad grammar mistake is mixing up pronouns and antecedents.

An antecedent is the noun that a pronoun refers to. Pronoun–antecedent agreement includes matching gender and number or amount of items.

In this situation, President Biden is one male, so we use the pronoun "his."

Here is an example of each:

The rules vary from type of pronoun and individual situation. If you aren’t sure, use a grammar checker or look up the rule to avoid making this bad grammar mistake. 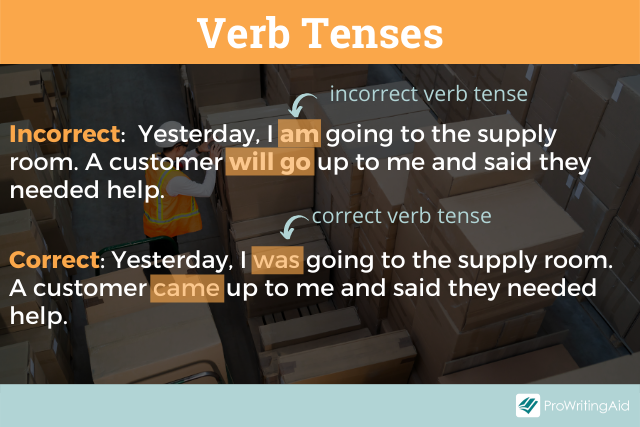 Mixing up verb tenses and moods is another common grammatical error people make. Verbs come in several tenses and moods. Make sure you’re using the correct one for what you’re talking about.

Let’s say you’re emailing your boss about an incident that happened at work. You need to write in one of the past tense forms.

That incorrect example used the present continuous tense, the future tense, and the simple past tense to describe something that happened in the past. Here’s what it should look like.

Now we have the past continuous and simple past tenses. These are correct for describing an event that occurred the day before. 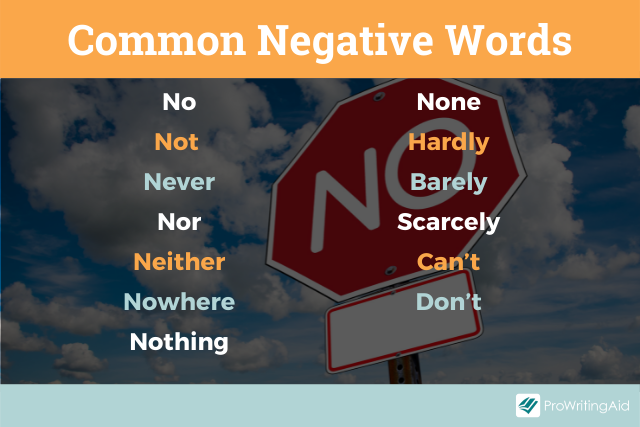 In the English language, using two negative words is a grammar error. We call these double negatives. You should only use one negative word in a phrase to show negation.

The most common negative words are no and not. There are also words that use no as a root word, like nothing, none, nor, and nowhere. But there are other negative words in English, too, such as neither, hardly, barely, never, or scarcely. Be aware of any negatives that are hiding in contractions, like don’t or can’t.

The only exception is that neither and nor are used together when talking about two things (e.g. neither here nor there). 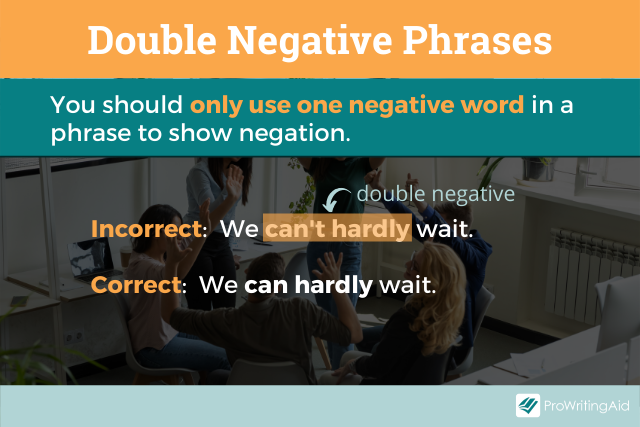 Here are a few examples of how to use negative words correctly.

Another example of bad grammar is misusing modifiers. There are two ways that modifiers can be used wrongly: when they are dangling or misplaced.

What’s a modifier? It’s an optional word or phrase that modifies another element in a sentence. You should always place a modifier as close to the element it’s modifying as possible. Otherwise, you might leave your reader scratching their heads.

A dangling modifier is a modifier that references nothing in the sentence. It’s as if the element it’s supposed to modify was forgotten, so the sentence is unclear. 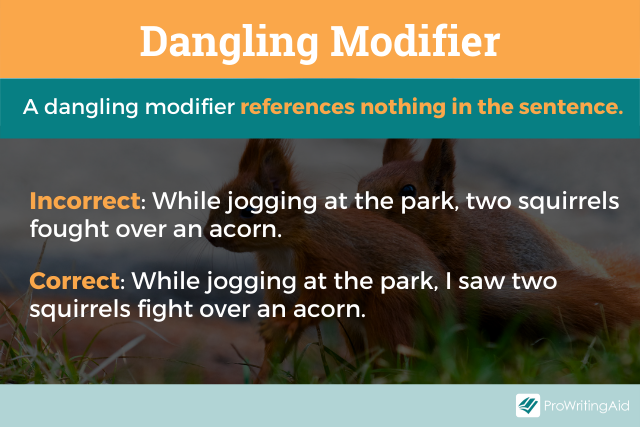 The squirrels weren’t jogging at the park, but the sentence doesn’t mention who was jogging!

Here’s how to fix it.

A misplaced modifier is a little different. The element that needs to be modified is present, but the modifier appears to modify something else. 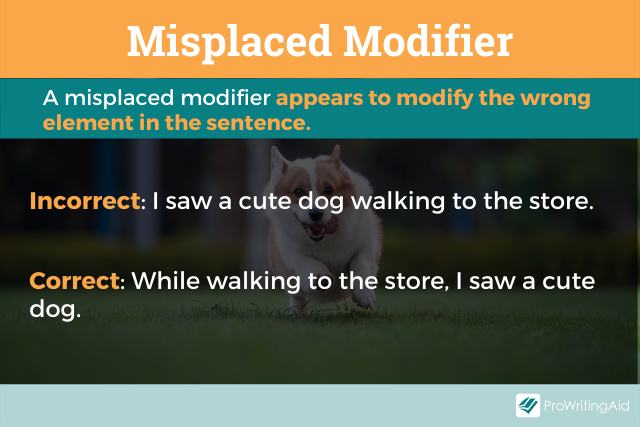 Is the cute dog walking to the store? Probably not. There are a few ways you can fix this sentence to make the modifier clearer.

A squinting modifier is a type of misplaced modifier that might refer to the word or words before or after the modifier. It makes you squint at the sentence to figure out what is being modified. 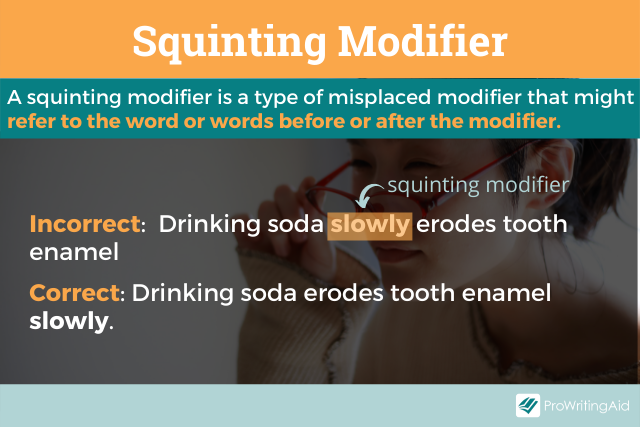 It’s not clear whether the adverb “slowly” refers to drinking soda or erodes. If you drink your soda quickly, will your tooth enamel still erode? Here’s how we can fix this squinting modifier.

Even though we moved the modifier “slowly” further from “erodes,” it’s much clearer than before.

Spelling errors can fall under the bad grammar umbrella, especially when you confuse homophones. Homophones are words that sound the same but are spelled differently.

It’s important to use the correct word in your writing, but homophones make this tricky. There are a few common homophones that people mix up often.

Here are a few of them.

When you’re using any of these words, always double check your meaning. If you don’t have the time to do this, ProWritingAid’s Homonym Report can help catch these sneaky words and keep your writing clear of errors. 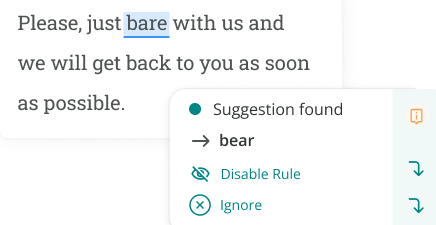 Keep your writing error-free with a free ProWritingAid account.

Often, bad grammar is synonymous with bad sentence structure. There are two main ways that you can write a sentence that has bad grammar. We’ll talk about each of these ways in more detail. 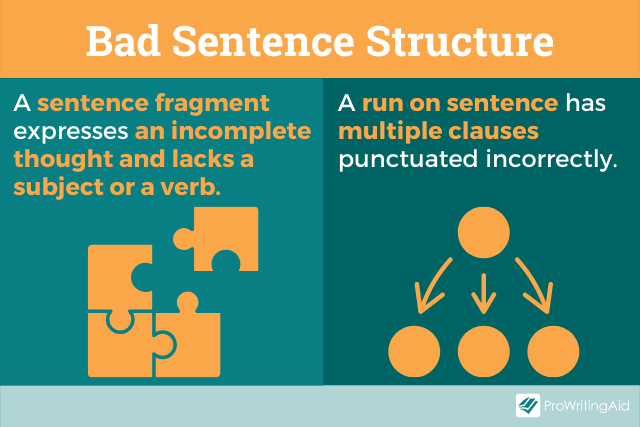 There are situations where we use sentence fragments, especially in speech, but they are not appropriate for formal writing.

The second way to have poor sentence structure is with run-on sentences. Run-on sentences are sentences with multiple clauses that are not punctuated correctly with commas or other punctuation marks.

There are several ways you could rewrite this run-on sentence correctly.

Those punctuation marks are important to make the sentences easy to comprehend.

Our next type of grammar mistake has to do with punctuation errors. We already talked about how run-on sentences don't use punctuation correctly. But what about regular sentences?

First, it’s important to always use the correct end mark. A period is used for declarative sentences, question marks are used for questions, and exclamation points are used for exclamatory statements.

Other punctuation errors might include forgetting to use quotation marks for quotes, using extra dots in an ellipsis, or mixing up hyphens and dashes.

Wordiness is another bad grammar mistake. Even if a sentence follows all the mechanics of grammar, it can be too verbose and use complicated words. An unnecessarily wordy sentence is often called an inflated sentence. Most of the time, simpler is better.

A tautology is a specific type of wordiness. It means to express the same idea twice. Tautologies make sentences redundant. While they can be useful in creative writing for emphasis when used sparingly, they add unneeded words in most types of writing.

Your heart always beats in your chest, so that phrase is unnecessary. 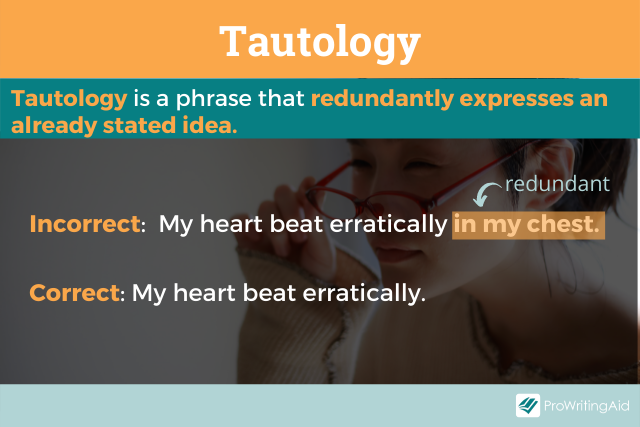 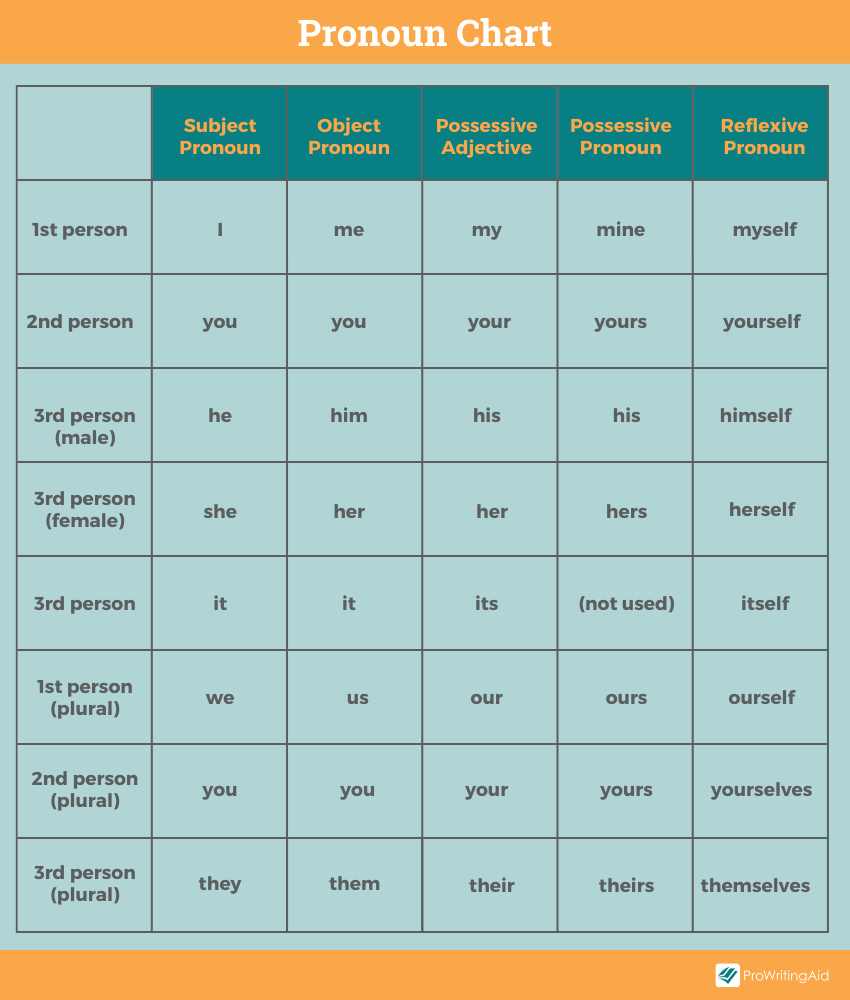 The pronouns they/them/their/theirs sometimes act as singular pronouns, and they have been since at least the fourteenth century. However, you should still use the third-person plural verb forms when you use the singular “they.”

Pay attention to whether you are discussing the subject or the object of a sentence to determine which pronoun to use.

How to Avoid Bad Grammar Mistakes

Even the best writers make mistakes! And there are so many grammatical rules to keep track of. With a quick proofread, you can avoid making these grammatical errors and others in your own writing.

epicmaster.technobard
In the pronoun section of this article, it corrects a 'their' to 'his or her' but doesn't account for if the possibility that a singular their might be their pronouns because they are non-binary or of indeterminate gender such as the case when referring to a stranger. For example, "Somebody left their wallet in the parking lot." This is talking about an individual to whom the speaker is not familiar and can not determine their pronouns. Similarly, throughout my comment here, I've been using singular their to talk about the speaker because I am not aware of the speaker's gender.

kyle.kucera1
Hey there! Thank you so much for this comment; we greatly appreciate you taking the time to point out where wording in our article might not have been as inclusive as it could be. I will make mention of this to the team that writes and makes corrections to our articles.

terrymitchell525
In the Punctuation Errors section of this article, there should be commas after the words "post-office" and "eighties" to off-set the phrase. And I believe the author meant "red" when referring to the color of the building. The article had some very helpful tools. Thank you.

kyle.kucera1
Hey there! Thank you for your comment! The example you mention is just showing one suggestion for the sentence in question. If you type that same sentence out while using PWA, you do receive comma suggestions for the sentence. However, it appears 'read' isn't caught. While ProWritingAid is fairly adept at understanding sentence structure, sometimes it misses some suggestions due to context. Therefore, even as good as our app is, we always recommend reading over your writing after using PWA.