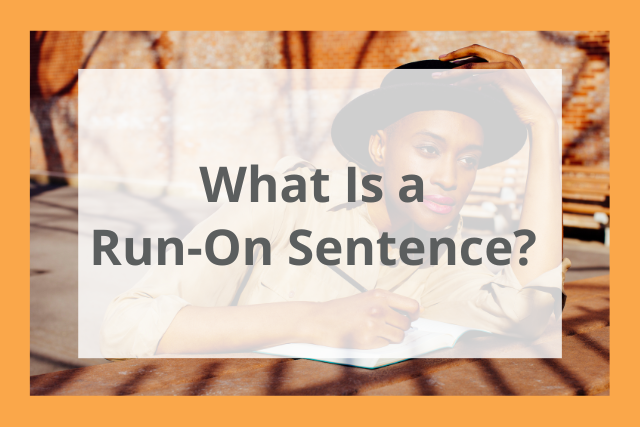 Run-on sentences are a common grammatical error, but luckily they are an easy mistake to fix.

A run-on sentence occurs when at least two independent clauses are pushed together without proper punctuation or conjunctions.

We’re taking a deep dive into run-on sentences to learn what they are, how to spot them, and how you can avoid them in your writing.

What Is a Run-On Sentence?

A run-on sentence isn’t just an overly long sentence. In fact, it doesn’t even have to be that long! 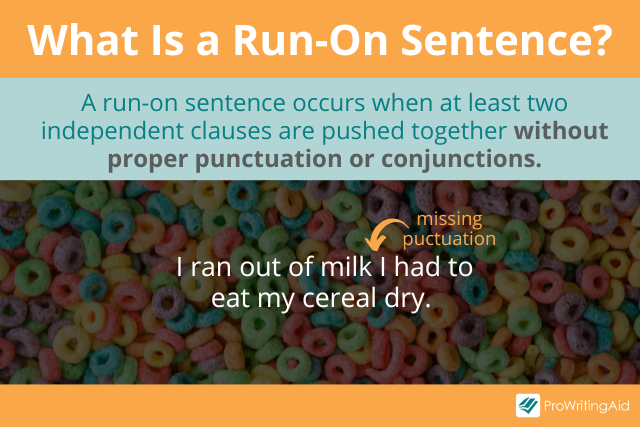 Take a look at the examples of correct compound sentences below:

Without proper punctuation, and any necessary coordinating conjunctions between the two independent clauses, the sentence becomes a run-on sentence.

Punctuation marks tell our brains when to insert natural pauses. When there aren’t pauses between complete sentences, it feels like you’re rushing to read it. Run-on sentences read as if someone is talking incredibly fast without stopping to breathe. This affects clarity and readability. Your brain can’t catch up to process what you’re reading. There’s no logical end to a train of thought, so you lose much of the intended meaning.

What Are the Three Types of Run-On Sentences?

While all run-on sentences involve independent clauses, they don’t all look the same. There are three main types of run-on sentences: comma splices, fused sentences, and polysyndeton.

Let’s look at each in more detail.

A comma splice occurs when you connect two independent clauses with only a comma and no coordinating conjunction. This is one of the most common run-on sentence mistakes.

Here’s what this looks like with our previous example:

When you separate independent clauses with a comma, you must also use a coordinating conjunction.

To avoid a comma splice, you can add a coordinating conjunction to your comma. You can also just use a semicolon, or in certain situations, an em dash or a colon.

The next type of run-on sentence is the fused sentence. You probably see fused sentences all the time on social media. They’re very common mistakes, especially in informal writing.

A fused sentence occurs when several independent clauses have no punctuation or conjunction between them.

Without the correct punctuation, it’s hard for our brains to catch up. We don’t know where to pause or where to put intonations.

A polysyndeton sentence is a run-on sentence with only conjunctions between independent clauses—but no punctuation.

Polysyndeton comes from the Greek poly, meaning many, and syndetos, meaning bound together.

Polysyndeton can also be a rhetorical device. It means using several conjunctions in close succession, and it can combine words or sentence fragments. But when those conjunctions combine independent clauses without punctuation, it’s a run-on sentence.

Here’s an example of a polysyndeton run-on sentence:

The quickest way to make that polysyndeton sentence grammatically correct is to add a comma before each “and.” 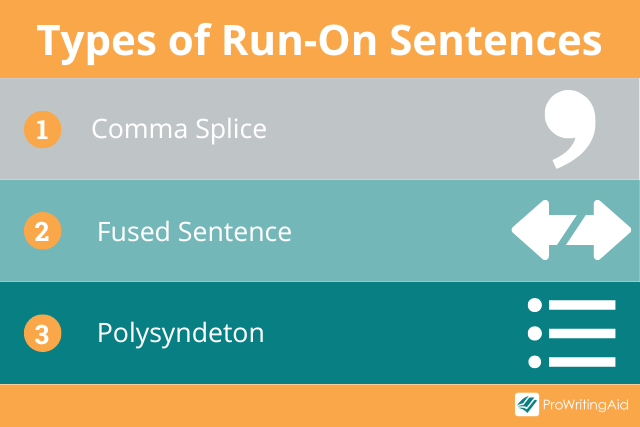 How to Spot a Run-On Sentence

Sometimes, sentences are long—even unnecessarily long. This is especially common in classic literature.

But how can you tell whether a sentence is just long, or if it’s a run-on sentence?

The key is to look at each independent clause in the sentence. Are these clauses separated with the correct punctuation? Is there a missing conjunction?

Often, run-on sentences will stand out when you’re reading because they feel like you’re speaking quickly without taking a breath. When this happens, take a look at the sentence to see if you need to correct it.

Sometimes, authors use run-on sentences as a stylistic choice. They can help achieve a frantic tone. They’re also useful for stream-of-consciousness narration when used sparingly.

Here are two examples of run-on sentences from classic literature:

“My God the cigar what would your mother say if she found a blister on her mantel just in time too look here Quentin we’re about to do something we’ll both regret I like you liked you as soon as I saw you I says he must be …”—William Faulkner, The Sound and the Fury

“But then they were married (she felt awful about being pregnant before but Harry had been talking about marriage for a while and anyway laughed when she told him in early February about missing her period and said Great she was terribly frightened and he said Great and lifted her put his arms around under her bottom … she was still little clumsy dark-complected Janice Springer and her husband was a conceited lunk who wasn’t good for anything in the world Daddy said and the feeling of being alone would melt a little with a little drink.”—John Updike, Run, Rabbit

The above are both examples of fused sentences. One of the most famous examples of comma splices comes from Charles Dickens. The opening line of A Tale of Two Cities uses multiple comma splices to set the dichotomous tone of the book.

How to Fix a Run-On Sentence

The quickest way to find and fix a run-on sentence is by putting your writing through a free grammar checker.

ProWritingAid’s grammar checker can identify your run-on sentences, and then you can fix them with just a click. 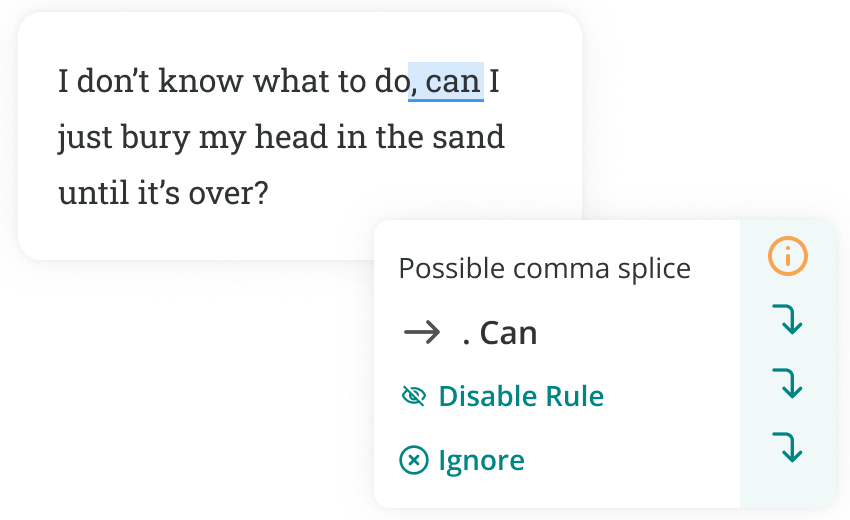 How to Avoid Run-On Sentences

There are several ways to avoid run-on sentences, but the best option will depend on the situation.

You can add a comma and a conjunction. You can use a semicolon. If you want to set information apart for emphasis, you might consider an em dash. A colon can show a direct connection between two independent clauses.

Sometimes, it sounds better to make separate sentences with an ending punctuation mark. Or you can rewrite the entire run-on sentence in a new way.

Let’s look at several ways you might fix this run-on sentence.

Avoid run-on sentences so people understand your meaning when you write. Using correct punctuation and conjunctions ensures your readers can process what you’re trying to say with ease.