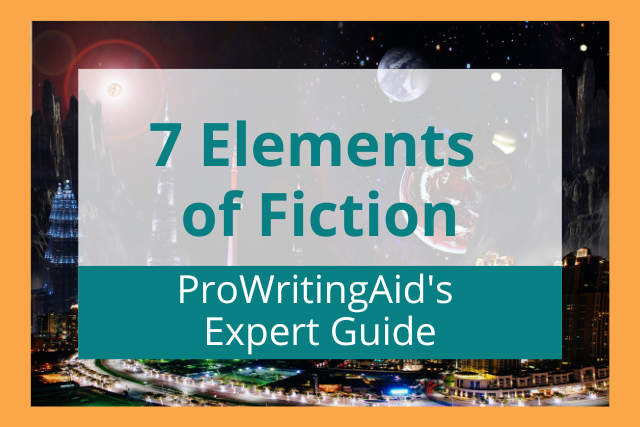 We live in a world full of stories. Novels, short stories, myths, and even plays are all forms of fiction.

All works of fiction are built using the same blocks. So what exactly are those building blocks, and how do they work?

This article will explain the seven elements of fiction and show you examples of what they look like in famous novels.

There are seven elements of fiction that can be found in any story, regardless of the form the narrative takes. These elements are character, plot, setting, theme, point of view, conflict, and tone. 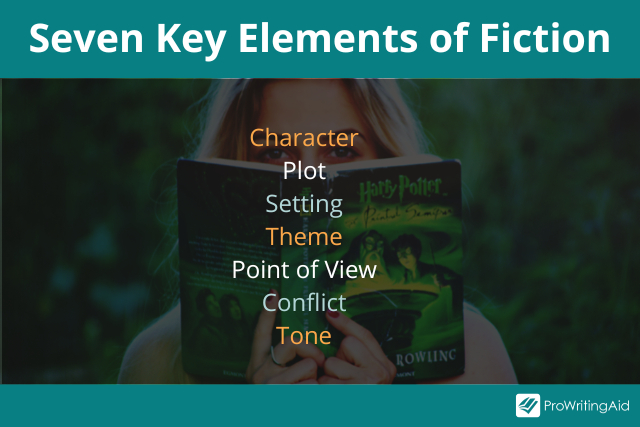 All seven elements work together to create a coherent story. When you’re writing a story, these are the fundamental building blocks you should use.

Eventually though, you’ll need all seven elements to make your story complete.

The 7 Elements of Fiction

Here’s an in-depth guide to the seven elements of fiction that every fiction writer and reader should know.

Characters are the players within a story. They can be human beings, animals, aliens, or even sentient objects. As long as they make decisions within the story, they’re characters.

In a well-written story, each character has a distinct appearance, personality, and motivation. They should be rounded characters who drive the story forward by pursuing their individual goals rather than flat characters who behave like cardboard cut-outs.

Plot refers to the events that happen within the story. It includes every major turning point that the characters experience.

In general, every story has a beginning, middle, and end.

The beginning is the exposition, where the key events of the story are set into action. The middle is the rising action, where progressive complications raise the stakes. And finally, the end is the resolution, where the story gets wrapped up.

Setting is a broad term for the world the story takes place in.

Settings can sometimes take on symbolic meanings. For example, the never-ending winter in Narnia in C.S. Lewis’s The Lion, The Witch and the Wardrobe represents the tyranny of the White Witch’s rule.

Setting includes time as well as place. A story might take place over the span of a single night, like in A Christmas Carol by Charles Dickens, or an entire lifetime, like in A Man Called Ove by Fredrik Backman.

You can use ProWritingAid’s Sensory Report to make sure you’re using all five sense to describe the setting in your story. The more sensory descriptions you use, the more your setting will come to life. 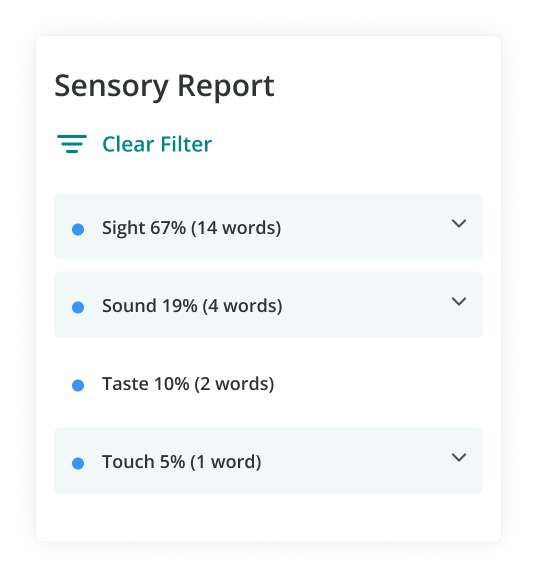 Theme refers to the philosophical questions your story explores.

Often, theme is revealed in the lesson the protagonist needs to learn. For example, one of the themes of Shelley’s science fiction book Frankenstein is that scientists shouldn’t use their powers to create new beings without considering the consequences.

Theme can also be revealed through the core conflict between the protagonist and the antagonist.

For example, in the Harry Potter series by J.K. Rowling, the antagonist, Voldemort, doesn’t love anybody, while the protagonist, Harry, is protected by the love of his family and friends. Thus, the power of love is a major theme in the series.

Point of view (POV) is the perspective from which a story is told.

In English class, you might have learned about the four basic POVs:

Conflict is what prevents the protagonist from achieving their goals. All fiction writing requires conflict because otherwise there would be no story, just a happy ending.

For example, imagine your protagonist’s goal is to get back home as quickly as possible. The conflict can be as small as a late bus that delays their return, or as large as an earthquake that tears their hometown apart.

Conflict is important because it’s what makes the story interesting. There would be no story if everyone could easily achieve everything they wanted. Adding meaningful obstacles for the characters to overcome is key for creating a compelling story.

When you’re reading or writing, ask yourself: What feeling is this story meant to evoke in the reader? Fear? Amusement? Thoughtfulness? Dread?

Stories can vary their tones on a scene level. Even a thriller should have lighthearted scenes, and romantic comedies should have serious scenes.

Examples of the Most Famous Elements of Fiction in Literature

(SPOILER ALERT: There are minor spoilers ahead for The Hunger Games by Suzanne Collins and The Great Gatsby by F. Scott Fitzgerald.)

Let’s look at the seven elements of fiction in The Hunger Games by Suzanne Collins, a young adult (YA) dystopian novel.

Plot: The plot kicks off when Katniss volunteers for the Hunger Games to protect her sister. The rest of the plot follows Katniss training for and competing in the Games.

Setting: The setting is the nation of Panem. Specific settings include District 12, the impoverished district where Katniss grew up; the glittering Capitol, where the rich citizens live in blissful ignorance; and the arena, where the Games take place.

Theme: The themes of the story include power and oppression, suffering as entertainment, and inequality.

Point of View: Katniss is the first-person narrator.

Tone: The writing style of the book is fast-paced and suspenseful, often evoking fear and excitement, as Katniss tells the reader about the life-and-death situations she’s experiencing.

Now let’s look at the seven elements of fiction in The Great Gatsby by F. Scott Fitzgerald, a classic work of literary fiction.

Character: The protagonist is Jay Gatsby, the Great Gatsby himself. Other key characters include his friend Nick Carraway, his love interest Daisy Buchanan, and Daisy’s husband Tom Buchanan.

Plot: The plot follows Jay Gatsby as he throws lavish parties in an attempt to win back Daisy, the love of his life. Over the course of the story, he courts her and nearly convinces her to leave her husband for him, but ultimately loses his life as a result of his efforts.

Setting: The setting is New York in the 1920s during the Jazz Age. Specific settings include West Egg, East Egg, the valley of ashes, and New York City.

Theme: The themes of the story include the American Dream, love and marriage, and dissatisfaction with life in spite of wealth and status.

Point of View: The book is written in the first person from Nick’s point of view. This POV is sometimes called first-person witness, since the narrator isn’t the same person as the protagonist.

Conflict: The primary conflict is character vs self conflict as Gatsby tries to achieve the American Dream and prove to Daisy he’s a great man. There’s also character vs character conflict between Gatsby and the other characters.

Tone: The tone of the book is serious and reflective while Nick reflects on Gatsby’s story and relays it to the reader.

Now you know the key elements that make a story work! Here’s a quick recap:

What do these elements look like in your favorite stories? Let us know in the comments.