Blog The Writing Process Man vs. Technology Conflict in Stories

Man vs. Technology Conflict in Stories 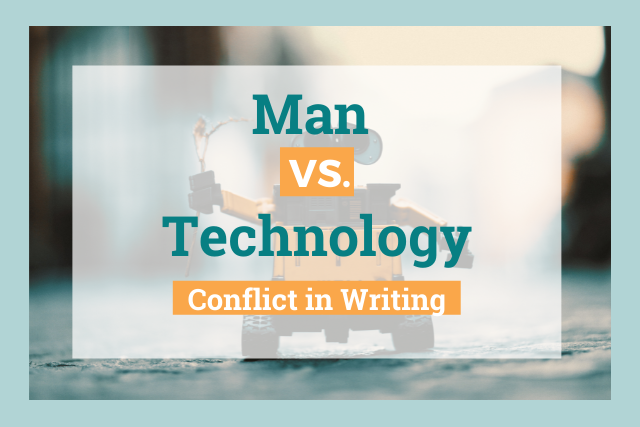 What do these three story ideas have in common?

You guessed it: these are all stories that center around a man vs. technology conflict.

“Man vs. technology” is a literary term that describes the struggle between a fictional character and some kind of man-made invention.

This type of conflict is a powerful tool for authors to explore existential questions and create fast-paced action.

In this article, I’ll explain what man vs. technology means, discuss some popular examples in literature, and show you how to use this conflict type in your own writing.

What Is Man vs. Technology Literary Conflict?

Man vs. technology is a type of literary conflict in which a character faces technology (such as a robot, a machine, or a mechanical failure) and must prevail against it. 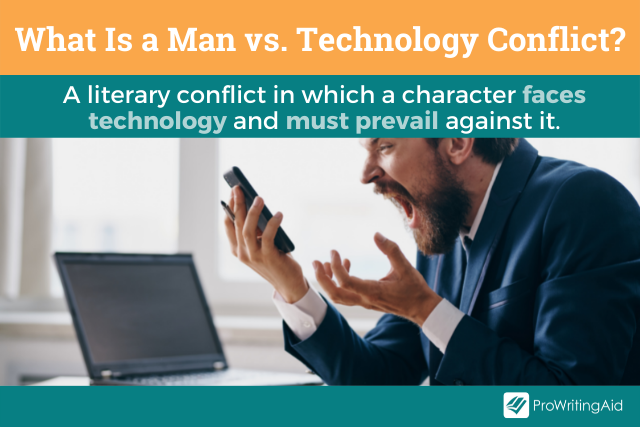 This type of conflict lends itself well to existential conflicts, since it raises the question of the hubris of mankind and how we might be defeated by the inventions we create ourselves.

Often, character vs. technology comes hand-in-hand with man vs. self conflict and man vs. society conflict, because all technology is originally built by humans.

When technology ends up hurting us, we only have ourselves to blame.

What Are Some Examples of Man vs. Technology Conflict?

Man vs. technology is a major theme in the genre of science fiction.

However, this conflict type can also exist in any genre in which technology plays a major role.

Let’s look at some examples from successful novels, movies, and TV shows.

Frankenstein is widely regarded as the first science fiction novel. It’s also one of the earliest and most ground-breaking examples of character vs. technology.

In this story, Dr. Victor Frankenstein creates a living creature by sewing together parts of different corpses.

Dr. Frankenstein has the best intentions, but his plan gets away from him, and the creature he brings to life ends up becoming a monster who hurts a lot of people. 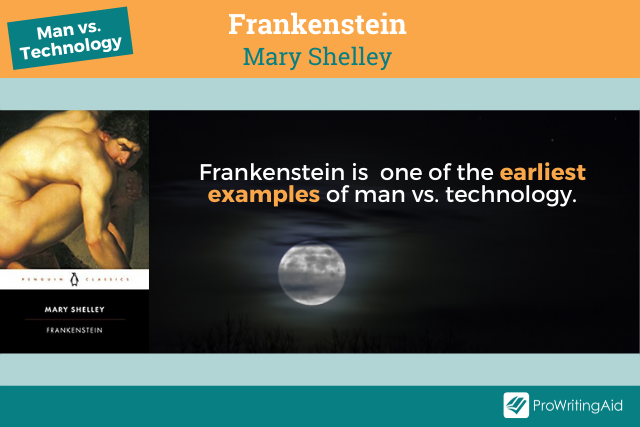 The man vs. technology struggle pits Dr. Frankenstein against his own creation.

He thought he could control the monster he’d built, but to his surprise, it turned out to have a mind of its own.

In 2001: A Space Odyssey, an American spacecraft heads for Jupiter with a crew of human pilots and scientists aboard.

The spacecraft’s operations are controlled by an intelligent supercomputer named HAL.

As the journey progresses, HAL starts to believe that the crew members are jeopardizing the mission, so he begins sabotaging their efforts.

He kills off the human crew one by one to preserve the mission.

The man vs. technology battle in this story pits the supercomputer against the human crew of his ship.

Humans have become dependent on the same technology that’s trying to kill them. 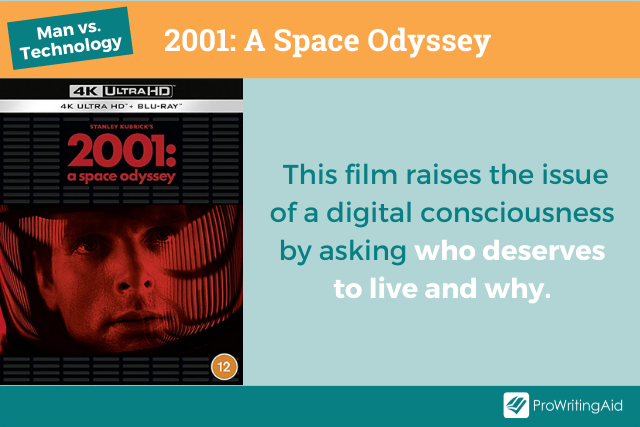 Eventually, one of the humans starts undoing HAL’s circuits to deactivate him. HAL repeats "I can feel it" in a voice full of emotion and fear.

During this haunting scene, we’re faced with the question: does HAL deserve life less than the humans aboard the ship do? Is it wrong for him to want to preserve himself?

In this case, the conflict between the human crew and their supercomputer raises existential questions about who deserves to live and why.

The Murderbot Diaries by Martha Wells

In the world of The Murderbot Diaries, intergalactic corporations use security units, or SecUnits, to protect their contracts.

SecUnits are created to obey their humans and to give up their lives to protect them.

The protagonist, who calls themselves Murderbot, is a SecUnit with a snarky personality and an addiction to TV.

All they want is to be left alone to watch adventure shows, which is in part a coping mechanism for the fact that all the humans treat them like a dangerous killer.

The character vs. technology conflict in this story is closely intertwined with man vs. self conflict.

Murderbot questions their own purpose in the world and whether they owe anything to the humans who created them. 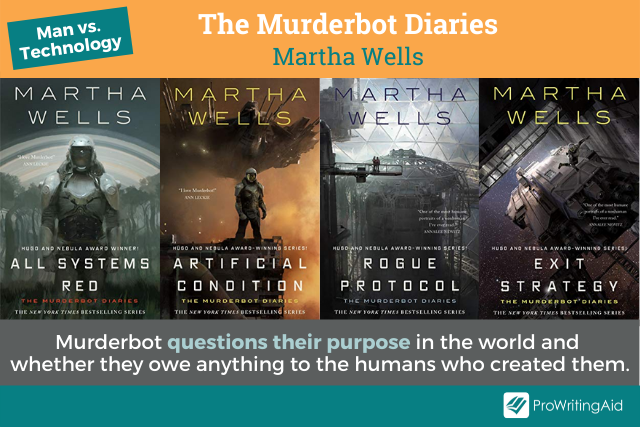 At the same time, the story is also full of man vs. society conflict. Murderbot has few legal rights, even after their human owners set them free.

The Murderbot Diaries is a fantastic example of how a society might discriminate against machines and refuse to acknowledge their personhood.

Ultimately, the story holds up a mirror to the discrimination in our own world, and makes us question the roles we play and how we can break free from them.

In the drama/romance movie Her, a lonely man named Theodore falls in love with an AI operating system named Samantha.

Their relationship can’t be physical, because Samantha doesn’t have a body, but that doesn’t stop Theodore from finding companionship with her. 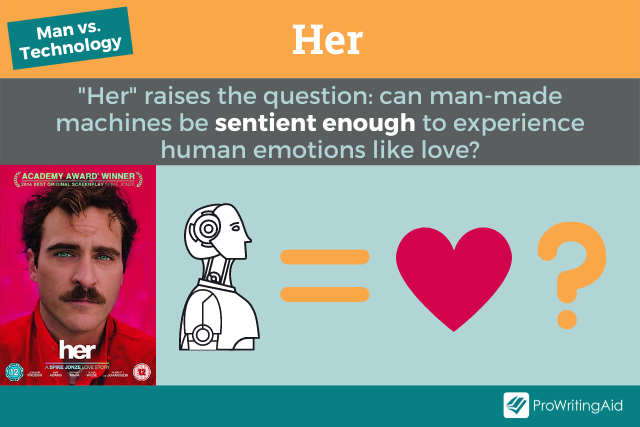 The two dual interpretations work together to give the movie tension and depth.

Each episode shows a different self-contained story set in a version of the near future.

For example, the dangers of social media are shown in the episode Nosedive.

In this world, the ratings you get on social media determine where you can live, where you can go to school, and even where you’re allowed to work. 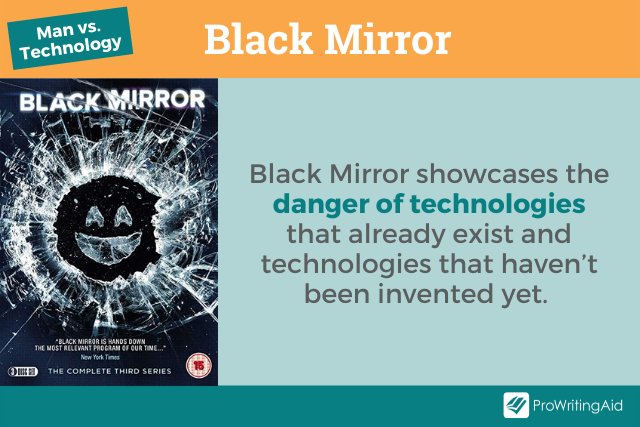 The story takes a familiar technology—social networks like Facebook and Instagram—and turns it into the premise for a dystopian future.

It’s a brilliant and terrifying example of character vs. technology conflict that uses existing technology rather than imagining a far-fetched possibility.

How Do You Create Man vs. Technology Conflict?

Man vs. technology conflict can help add tension to your story, while also exploring some interesting themes.

Here are my top tips for creating man vs. technology conflict in your own stories.

Man vs. technology is a great tool for exploring interesting existential questions.

These questions don’t have to be the sole focus of the story, but they add emotional resonance and leave your readers thinking long after they’ve turned the final page.

Some examples of questions you can explore include:

In your story, you don’t have to come up with a single answer.

You can use different characters or different plot threads to show the different sides of that question and add nuance and depth.

In some cases, humans can be the bad guys. Human society is often full of prejudices and flaws that are easier to see from a minority perspective.

You can consider telling a story about a scientifically created human questioning his or her own humanity. Machines, robots, and AIs can make for fascinating protagonists. 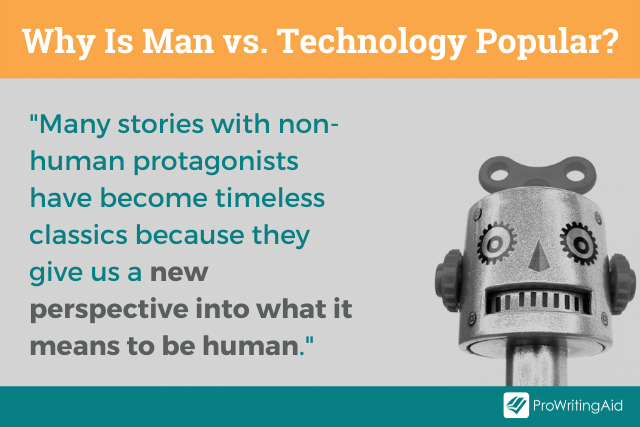 Many stories with non-human protagonists have become timeless classics because they give us a new perspective into what it means to be human.

Man vs. technology is an external conflict type, meaning that it relies primarily on action rather than internal thought. 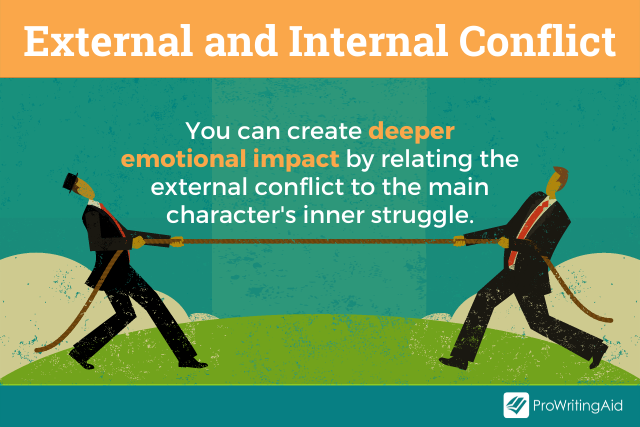 For example, a scientist building a machine or a robot fighting a human are both clear examples of external conflict.

However, you can and should incorporate internal conflict types into your story, such as character vs. self conflict and character vs. fate conflict.

ProWritingAid’s Pacing Report can help you balance these two forms of conflict. The software will highlight areas it identifies as introspection and backstory. 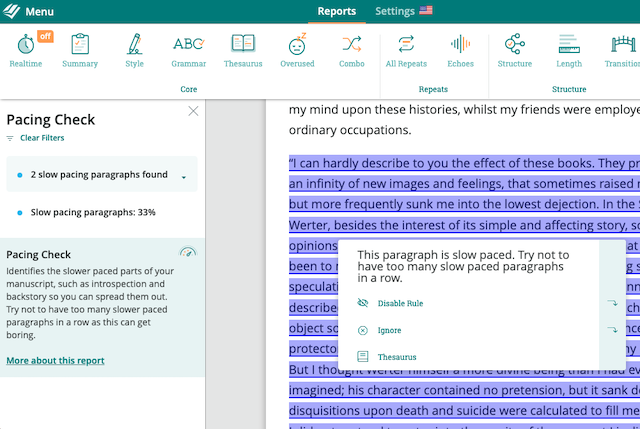 Try the Pacing Report with a free ProWritingAid account.

You can create deeper emotional impact by relating the external conflict to the main character’s inner struggle.

In Frankenstein, the monster questions whether he was ever meant to be created and why he exists at all while he wreaks havoc on the village.

In Her, the protagonist wonders what love really is and whether his love counts as love while he goes on dates with his AI.

These internal conflicts make us care more about what’s happening in the outside world.

Technology evolves quickly, and the machines that scare us and fascinate us have changed a lot over the decades.

The robots Isaac Asimov imagined in I, Robot aren’t the same as the robots you’d imagine today. 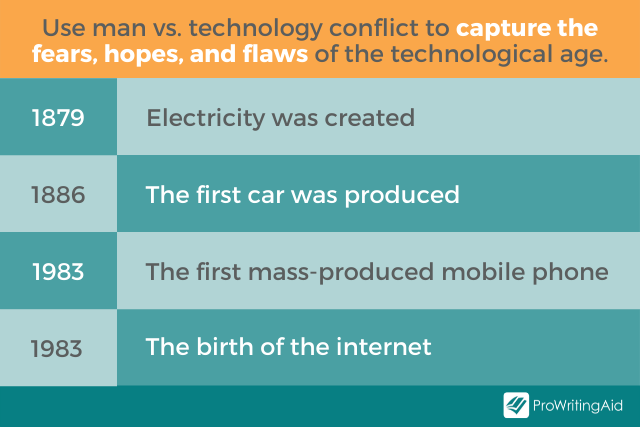 It’s best to write about the most cutting-edge innovations so you can explore our most relevant concerns. Try to capture the fears, hopes, and flaws of the world we live in.

There you have it: a complete guide for understanding and creating man vs. technology conflict.

What are your favorite books where a character wrestles with the impacts of technology? Let us know in the comments.