Every great storyteller needs to understand how to develop characters.

Think about your favorite stories—the ones that stuck with you even after you turned the last page. What was the magic that made those stories so compelling?

Most likely, the answer has something to do with good character development. It doesn’t matter how intricate your worldbuilding is, or even how exciting your plot is. If your characters fall flat, your readers will probably stop reading. 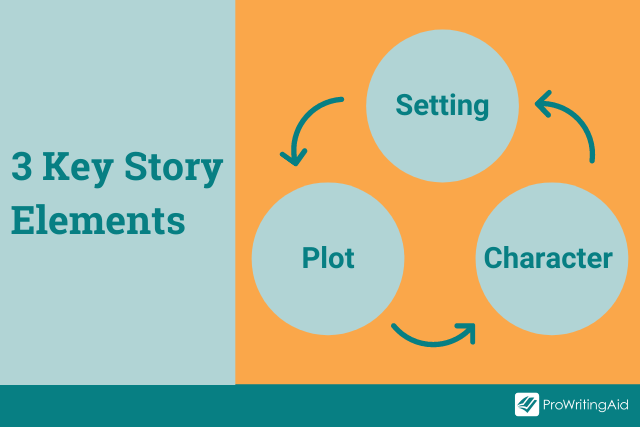 What Is Character Development?

But before you can create convincing characters for your reader, you need to plot their development off the page, too.

This article will teach you how to build three-dimensional characters from the inside out. Read on to learn how to create fictional characters that will capture readers’ hearts and bring your stories to life.

The best character development starts from within.

We’ll start by fleshing out your main character’s internal characteristics: the motivations, emotions, fears, and flaws that drive them to behave the way they do. 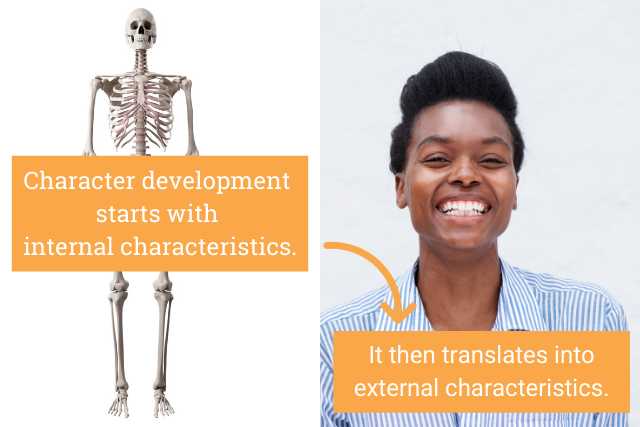 What Does Your Main Character Want—and Why?

The first step in developing compelling characters is to figure out what each character wants most in the world. This is most important with your protagonist and antagonist, but it can be helpful for secondary characters, too. 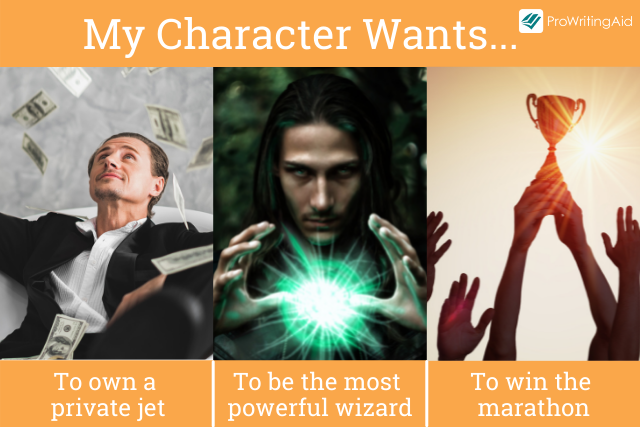 Here are three examples of well-developed main characters and what they want most at the beginning of the story:

What Does Your Main Character Need—and Why?

At first glance, this might seem similar to the previous question, but in reality, what you want and what you need can be two very different things. 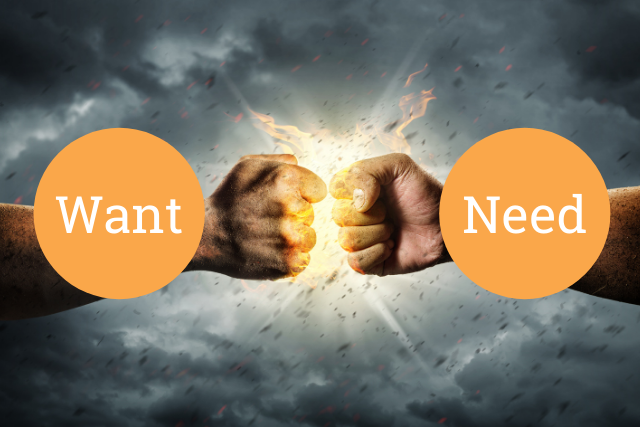 What your character wants is a surface-level desire that they think will make them happy. What they need, however, is the thing they actually require in order to achieve true happiness, even if they don’t know it yet.

This battle between “want” and “need” will create an endless well of internal conflicts and tension. This creates a great overall character arc and avoids a boring and static character. 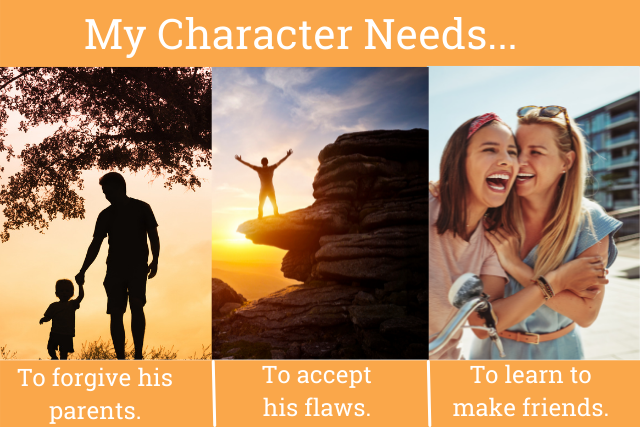 Here are some examples from the same stories we discussed earlier:

What Are Your Character’s Flaws?

It’s a common mistake to think that a perfect protagonist is the same thing as a likable protagonist. In truth, readers relate more to characters with flaws than to characters that are too perfect.

In some cases, the difference between what your character wants and what your character needs might directly imply a character flaw. For example, Scrooge’s greatest flaw is his miserliness. This is closely related to what he wants most in the world—to keep his mountains of money to himself.

In other cases, you’ll need to dig a little harder to come up with your character's flaws. If you’re stuck, remember that a strength can often become a flaw if taken to extremes. 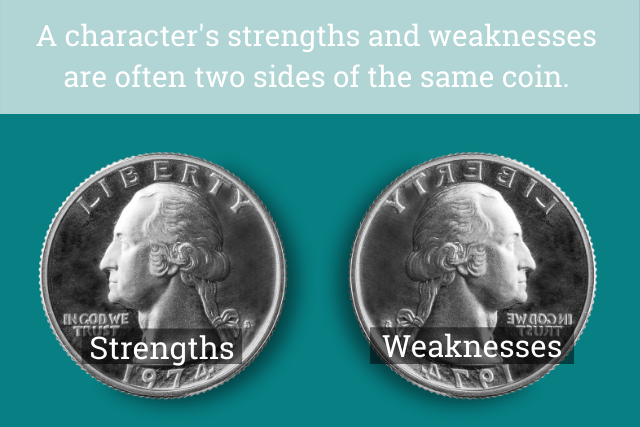 The most memorable characters are the ones who do bad things for good reasons. For example, Scrooge is miserly and stingy with his money because he grew up in poverty and pulled himself up by his bootstraps. Katniss is pragmatic and focused on survival because her father died when she was a child, leaving her as the one responsible for keeping her family alive. 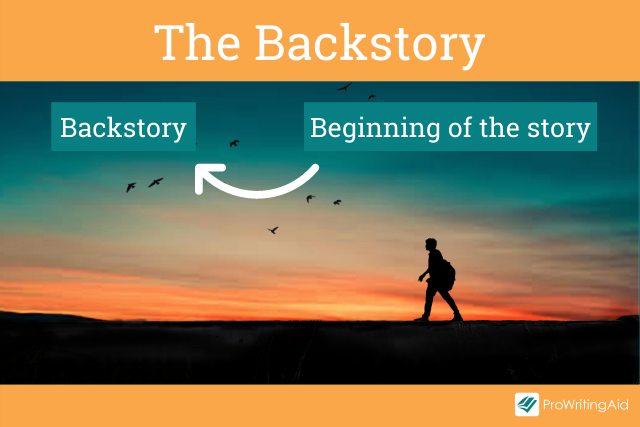 A compelling backstory will make your readers empathize with your characters, regardless of how many mistakes they make, because they understand why your characters would act this way.

In the previous question, we looked to your character’s past to figure out what happened to them before the story started. Now it’s time to look forward. 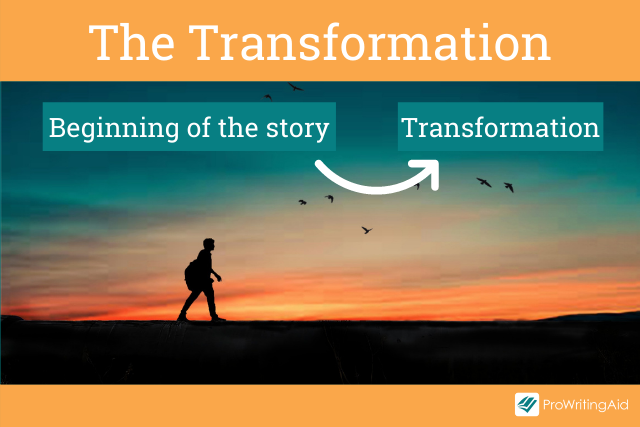 Good stories transform your characters. The plot should force all of your main characters to change in some fundamental way.

External characteristics encompass all of your character’s more physical traits: what they look like, what they sound like, and how they present themselves to the world.

Here’s the good news: if you’ve already fleshed out your character’s internal characteristics, you’ve got the skeleton down already. Now you just need to add flesh to the bones by working your way out from what you’ve already established. 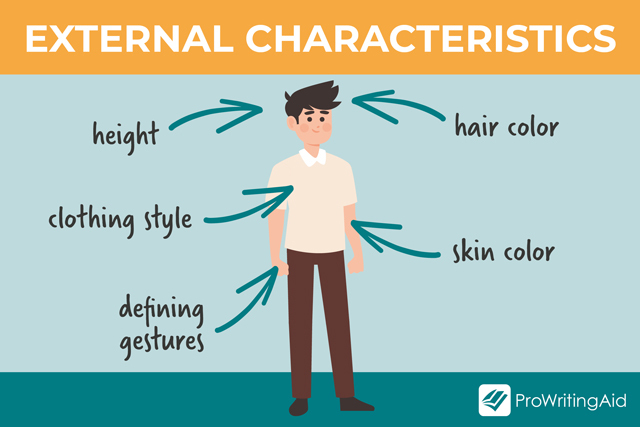 Here are some well-developed character examples in literature. Notice that these authors include specific details that tell us something about what kind of person the character is on the inside, as well as on the outside.

“Fifteen-year-old Jo was very tall, thin, and brown, and reminded one of a colt, for she never seemed to know what to do with her long limbs, which were very much in her way. She had a decided mouth, a comical nose, and sharp, gray eyes, which appeared to see everything, and were by turns fierce, funny, or thoughtful. Her long, thick hair was her one beauty, but it was usually bundled into a net, to be out of her way. Round shoulders had Jo, big hands and feet, a flyaway look to her clothes, and the uncomfortable appearance of a girl who was rapidly shooting up into a woman and didn't like it.”

—Little Women by Louisa May Alcott

“Her skin was a rich black that would have peeled like a plum if snagged, but then no one would have thought of getting close enough to Mrs. Flowers to ruffle her dress, let alone snag her skin. She didn’t encourage familiarity. She wore gloves too. I don’t think I ever saw Mrs. Flowers laugh, but she smiled often. A slow widening of her thin black lips to show even, small white teeth, then the slow effortless closing. When she chose to smile on me, I always wanted to thank her.”

—I Know Why the Caged Bird Sings by Maya Angelou

“Ender did not see Peter as the beautiful ten-year-old boy that grown-ups saw, with dark, tousled hair and a face that could have belonged to Alexander the Great. Ender looked at Peter only to detect anger or boredom, the dangerous moods that almost always led to pain.”

Many writers like to start a new story by figuring out their characters’ voices. After all, physical descriptions tend to be relatively brief, but dialogue can go on for pages at a time.

No two characters sound exactly the same. Some are soft-spoken, while others are loud and confident. Some crack jokes, while others stay serious even in the most absurd situations. 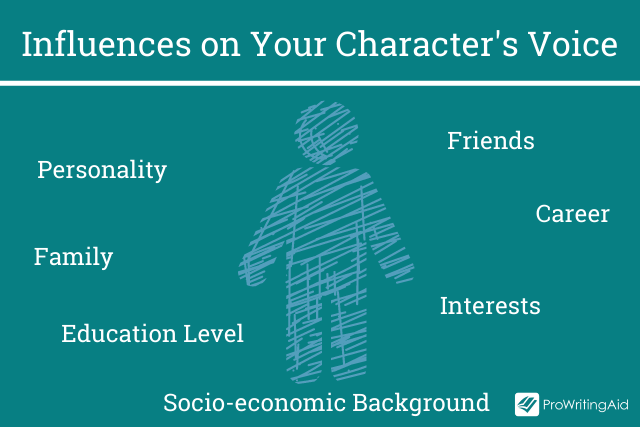 If you can give your character a unique and consistent voice, they’ll feel more three-dimensional and alive.

What Are Your Character’s Interests and Hobbies?

It’s easiest for readers to relate to characters who have passions.

Again, try to be specific here. If you’ve decided that your character likes art, try to take it one step further: what mediums do they use? What period of art history are they most obsessed by?

What’s Contradictory or Unexpected About Your Character?

We’re all familiar with most character tropes out there: the popular mean girls, for example, or the world-weary detectives. These tropes can be a useful part of your toolkit, but if you rely on them too much, they can also make your story boring and forgettable. You can rely on ProWritingAid’s cliché report to help you avoid these sneaky tropes and keep your writing exciting. 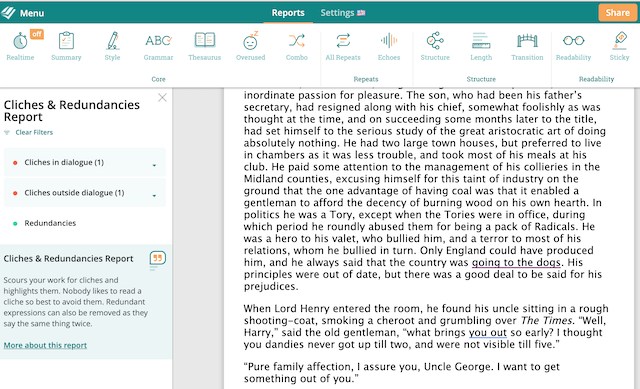 Instead of using clichés, it’s time to figure out what’s contradictory or unexpected about your characters. For example, if they’re a particularly cynical character, consider giving them a specific cause that they’re surprisingly idealistic about. Or, if they’re a particularly silly character, consider giving them a specific topic that they’d never joke about.

Imagine that all of your main characters are riding together in an elevator. Then, imagine that the elevator malfunctions.

Take out your laptop or a notebook and write out the scene and think about how each character responds. 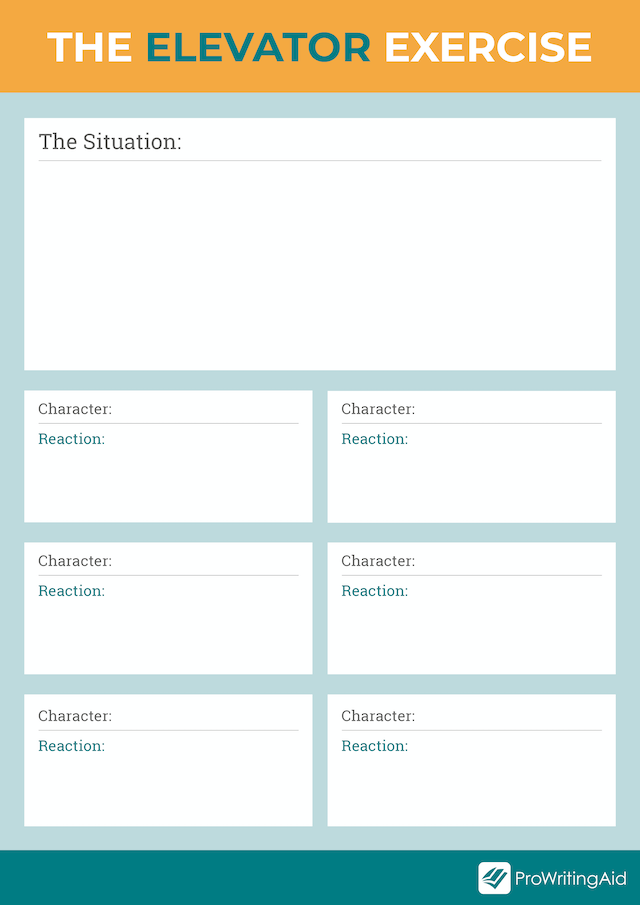 If you’re a more atmospheric writer and you tend to write based on your gut, this one is a useful exercise for you. 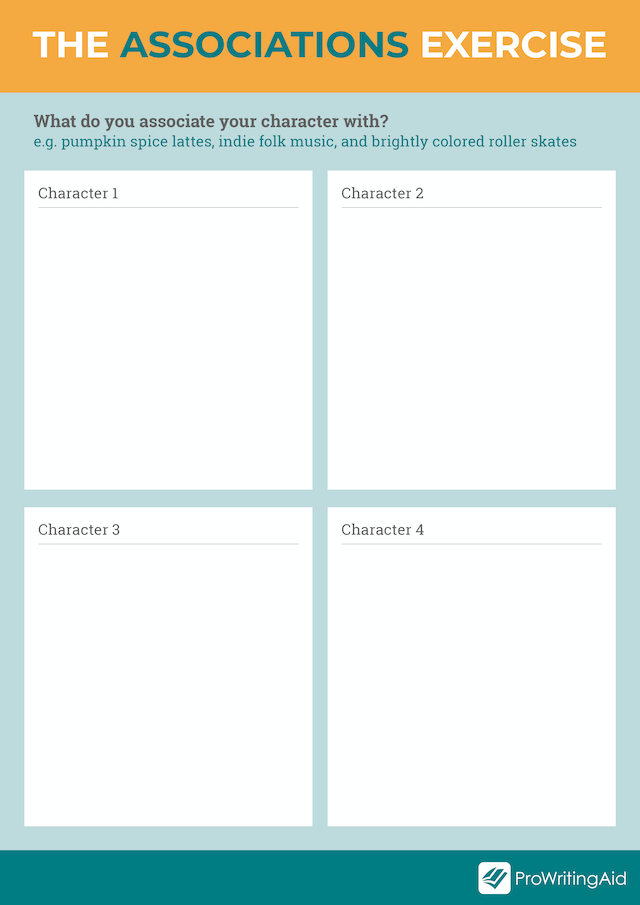 As you’re drafting your story, you can refer back to this list whenever you feel like you’re losing sight of who your character is supposed to be.

One of the most effective ways to grow as a writer is to read. Read stories like the ones you want to write, and stories unlike them. Read in every genre and time period, even the ones you don’t normally enjoy.

Pay attention to your favorite characters and what makes them memorable. Over time, you’ll collect more reference points for your own characters.

Now you’re ready to write a story with compelling, multi-dimensional characters. By starting from within and working your way out, you can create characters worthy of driving your stories.

sarahtownend
A really helpful article, thanks Hannah. I am using it now to help formulate a more inviting short story character.

millie.dinsdale
You're welcome Sarah! Glad to hear that this article has helped you.

taylor.schwenk
Wow, my characters have a real feeling about them now.

ashleigh.ferguson
We're happy that this article could help.