Blog The Writing Process The Inner Struggle Between Man vs. Self: How to Use Conflict in Your Writing

The Inner Struggle Between Man vs. Self: How to Use Conflict in Your Writing

Nietzsche famously said, “The worst enemy you can meet will always be yourself.”

What happens when a fictional character is their own worst enemy? That’s when you get man vs. self conflict—conflict that involves a character’s internal struggle against himself.

Man vs. self conflict is one of the most compelling types of literary conflict, because it’s the type that creates the most complex characters.

Every person has flaws and self-doubt—that’s what makes us human. Readers love stories in which a character is willing to challenge their own prejudices and flaws, or when they come to terms with who they really are.

In this article, I’ll explain what the term man vs. self means, discuss some popular examples in literature, and teach you how to use this conflict type in your own writing.

What Is Man vs. Self Literary Conflict?

This type of conflict often involves a character choosing between two conflicting obligations, facing their flaws and fears, or coming to terms with their own nature. 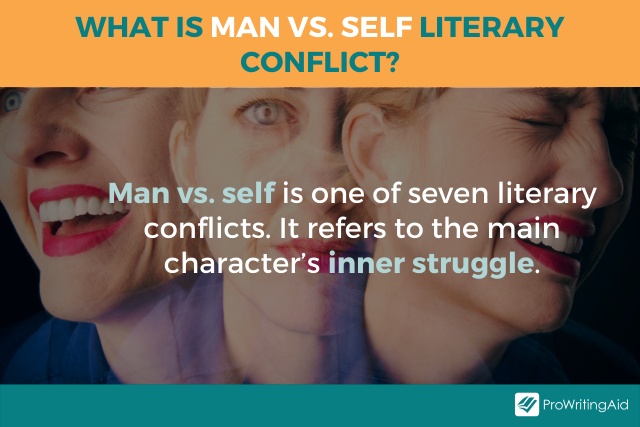 Often, stories that have man vs. self conflict have other types of conflict, too. The internal conflict may reflect or inform other external conflicts that occur in the narrative.

What Are the Best Examples of Man vs. Self Conflict?

Let’s look at five examples of man vs. self conflict from successful novels and movies.

In Emma, the titular character starts out thinking that she knows what’s best for her friends. She repeatedly meddles in her friends’ lives, acting as a matchmaker and telling them what they should and shouldn’t do.

Over time, she starts to realize that her matchmaking has ended up hurting her friends, rather than helping them. She struggles with this realization about herself and tries to deny it, but at last, she accepts that she was wrong and sets about fixing her mistakes.

Emma is a fantastic example of a novel in which man vs. self is the primary conflict type. There are other important conflicts at play in the story, such as man vs. man and man vs. society, but Emma’s internal struggle and growth is the crux of the novel.

Prince Hamlet is a fascinating case study for man vs. self conflict because he faces a whole slough of internal conflicts.

Hamlet wants to avenge his father by killing his uncle Claudius, but he also internally grapples with multiple reasons not to go down this path.

One man vs. self conflict is Hamlet’s struggle with the morality of whether or not it’s justified to kill Claudius. He wants revenge for his father, but he knows that it’s wrong to kill his own uncle, especially when he’s not sure if the Ghost he saw was really his father. 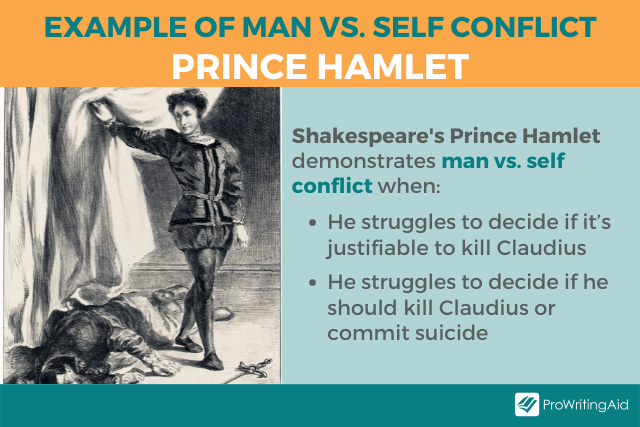 Another man vs. self conflict is Hamlet’s internal debate over whether to kill Claudius or to commit suicide. This internal debate is the theme of his famous Act 3 monologue, which begins with, “To be, or not to be, that is the question…”

All of these internal conflicts keep the tension high as the play moves forward.

3. Katniss Everdeen in The Hunger Games by Suzanne Collins

Over the course of the trilogy, however, Katniss is repeatedly forced to choose between surviving and making a stand for something greater. She realizes that she’s willing to risk her life—and even her family’s—to act as a figurehead for the rebellion and help fight for what she believes in.

Katniss’s man vs. self conflict is a struggle between two values she cares about: keeping her family alive, and fighting against the oppressive Capitol. Neither of these values is something she’s willing to give up, but her circumstances make it impossible for her to prioritize both. 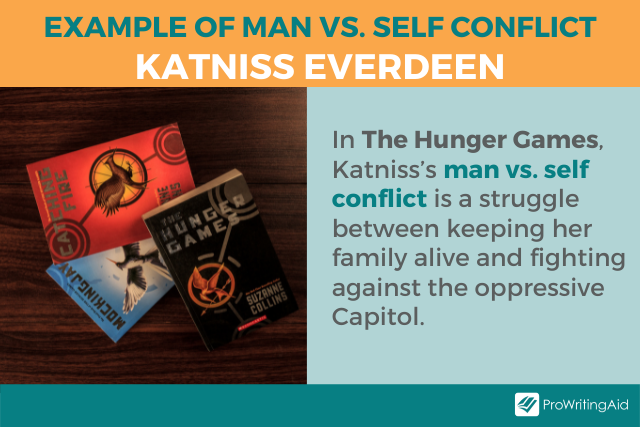 4. Cole Sear in The Sixth Sense

In The Sixth Sense, eleven-year-old Cole has the ability to see dead people. He sees them everywhere: at school, at home, at his classmates’ birthday parties.

When the movie begins, Cole lives in constant terror, because he doesn’t know how to make these ghosts leave him alone.

In this case, the man vs. self conflict is a battle between Cole and his supernatural power. He’s afraid of his own abilities and wishes he could be normal, so that he doesn’t have to live in fear anymore. 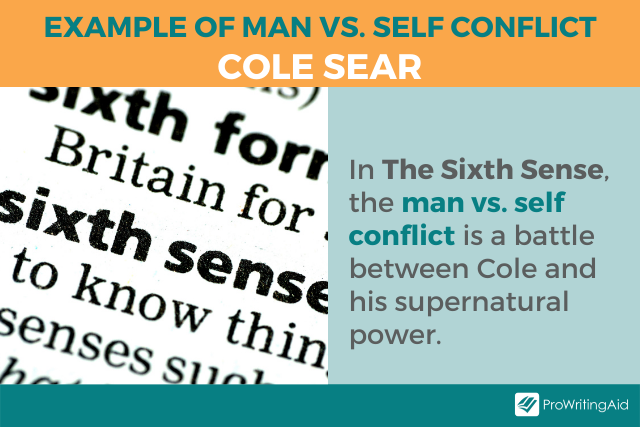 At the end of the movie, however, Cole comes to realize that he can help the ghosts find peace instead of letting his fear rule him. All he wanted was for the dead people to leave him alone, but what he actually needed was to find a way to help them.

The Sixth Sense is a fantastic example of man vs. self conflict. Once Cole realizes that his power doesn’t have to be a scary thing, he comes to terms with his own nature and comes to see it as a gift, rather than as a curse.

5. The narrator in Fight Club by Chuck Palahniuk

In Fight Club, the main conflict appears to be a man vs. man conflict between the unnamed narrator and Tyler Durden.

Tyler is a charismatic man who seems to know exactly what he wants and how to get it, while the narrator is an insomniac who's looking for something to believe in.

The two men become friends, but they begin to clash when the narrator starts to question Tyler’s decisions.

Later, we realize that Tyler and the narrator are two different personalities within the same body. Tyler takes over when the narrator goes to sleep. 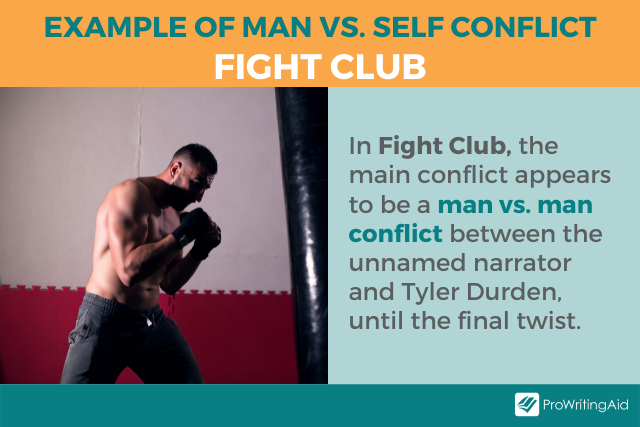 Fight Club is an example of an extremely literal version of man vs. self conflict, to the point where it appears to be a man vs. man conflict. Most of this external conflict takes place inside the main character’s mind, because they’re simply manifestations of his inner struggle.

How Do You Create Man vs. Self Conflict?

While I am by no means telling you to rip off the examples above, it’s useful to use your favorite authors as inspiration. It’s especially good to review the work of authors who have written in the same or similar genre as you. That way you’ll be even better at understanding the technical conventions of that genre (and maybe some rules to throw out too).

ProWritingAid’s Summary Report allows you to compare your writing to your favorite writers with the author comparison feature. 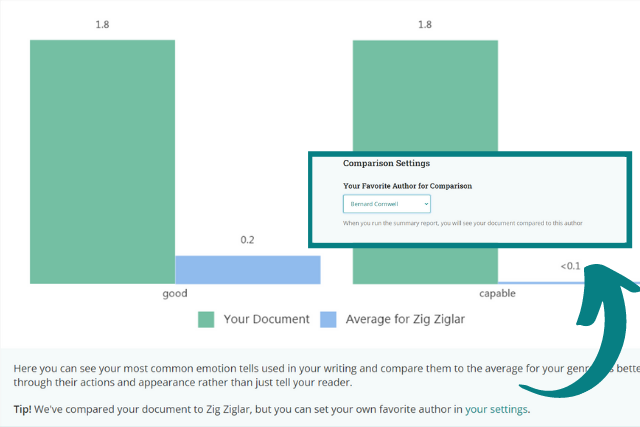 Man vs. self conflict can be a powerful tool for asking thematic questions and raising the tension in your stories.

Here are some of my top tips for creating man vs. self conflict in your own writing process.

Create a Battle Between Want and Need

One fantastic way to create man vs. self conflict is by using the “want vs. need” method.

First, start by giving your character something they want—a surface-level goal that they think will finally make them happy.

Examples of a "want":

Then, give them something they need—a deeper goal they’ll need to achieve in order to feel complete and fulfilled.

Examples of a "need":

Finally, make the character’s "want" and "need" mutually exclusive. Make it clear that the protagonist can’t achieve both.

For example, your protagonist might want to take revenge on the man who murdered her parents, when what she actually needs is to let go of the past and forgive him. 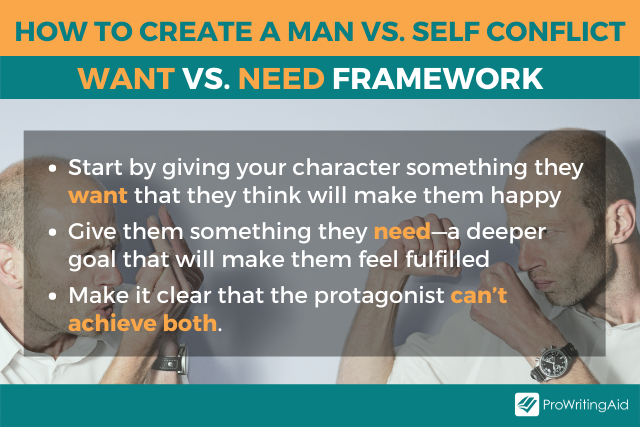 This framework is an easy way to create man vs. self conflict because it sets up two contradictory goals within the character's mind. Those two goals can clash with one another, creating tension and stakes, at various points in your story.

Show Us Where the Inner Struggle Began

The best internal conflicts grow out of events in the protagonist’s backstory.

An point to note though, when developing your characters’ backstory you’ll want to make sure your readers can following it. ProWritingAid’s Pacing Check will help to identify your introspection and backstory and suggest if you need to go slower or faster so you can keep your readers’ attention. 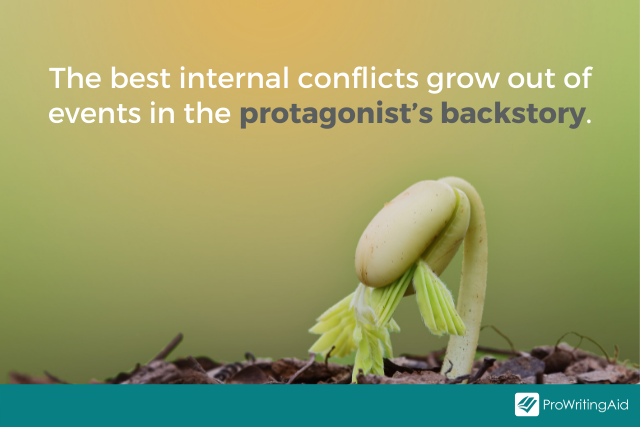 For example, Katniss Everdeen seems independent to a fault and unwilling to trust anyone, not even her own mother. However, her backstory shows us that her mother sank into deep depression after the death of Katniss’s father, leaving Katniss and her sister to starve.

Because of this backstory, we understand where Katniss’s trust issues come from and how they affect her man vs. self conflicts.

Show us the core moments in the past that have brought the character to this moment.

Make sure you tie in your man vs. self conflict with the external conflict of the story.

It’s a common pitfall to assume that because man vs. self is an internal conflict, it should take place entirely inside the character’s head. But no one wants to read pages and pages of internal monologue. 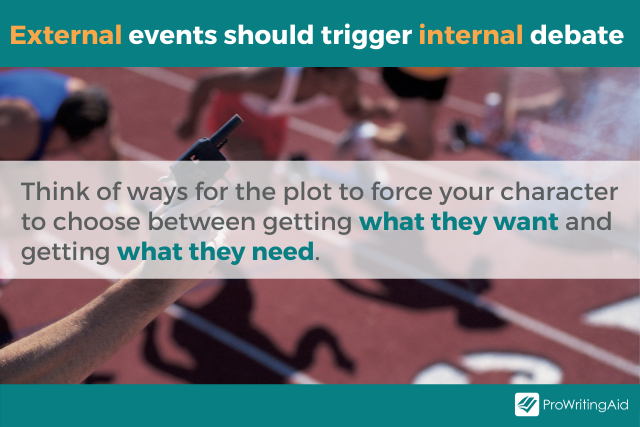 Once again, I’ll use Katniss as an example. The Hunger Games isn’t about Katniss sitting in her room and wondering whether her family’s survival is more important than the freedom of her nation. Instead, she has to fight battles and enact rebellion plans.

All of Katniss’s internal conflict is driven by action, which made her story into the bestselling franchise it is today.

Is Man vs. Self Internal or External?

There you have it: a complete guide for understanding and creating man vs. self conflict.

Man vs. self is a type of internal conflict in fiction. If you want to explore different elements of your character’s psyche, try introducing man vs. self conflict to your writing.

What are your favorite books where a character struggles with some part of themselves? Let us know in the comments.