Systematic vs. Systemic: What's the Difference? 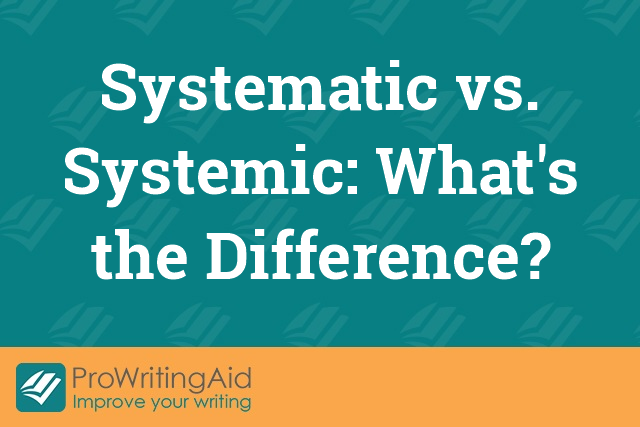 Systemic and systematic. These two words look so much alike it’s easy to think they have a shared meaning.

But alas, as with many words in the English language, appearances are deceiving.

The words share the same root word and are both adjectives, but they are not interchangeable.

Want more information? Keep reading as we break down the differences between these words.

What Is a System?

Systematic and systemic both have uses that relate to their shared root word, system.

Let’s take a moment to review what a system is.

Merriam-Webster defines a system as a regularly interacting or interdependent group of items forming a unified whole.

To paraphrase, a system is a set of related things that work together toward one goal, or exist together to create a complete entity.

The definition applies to a variety of contexts. For example, 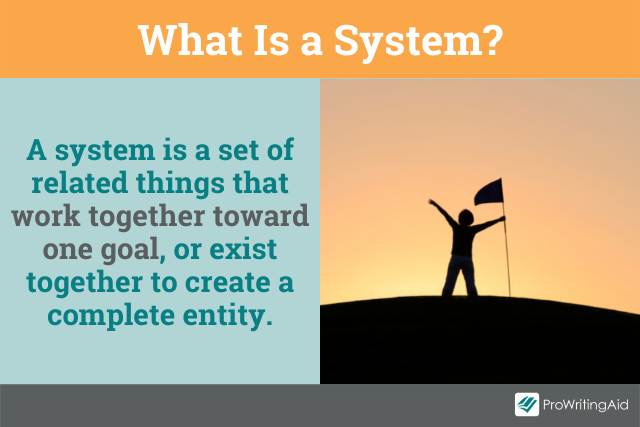 Systems don’t always have to be so “important.” You may have a system for doing your laundry. You perform actions and use materials in such a way to achieve the goal of clean clothes.

What Does Systematic Mean?

Now you know what a system is, let’s take another look at that definition for systematic:

But what does that actually mean?

Here’s the system of game-play: 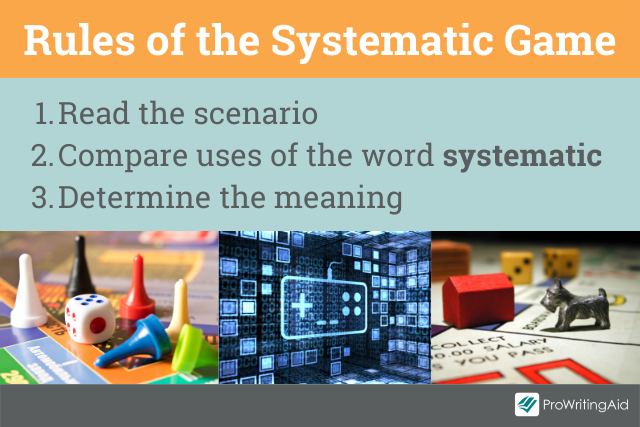 Easy. I don’t like games with lots of complicated rules.

Scenario One: My Cousin and the Chocolate Chip Cookie

My cousin and I went to the same high school and had lunch at the same time one year.

The best snack offered in the cafeteria was the warm, giant, chocolate chip cookie that came served in a cellophane sleeve with an opening at the top.

Every day, my cousin would buy a cookie, and then follow the same systematic approach to eating it.

When my cousin was a young man, he was betrayed by his closest friends and sent to prison to die.

But he escaped and found hidden treasures—more money than anyone could spend in ten lifetimes.

He wasn’t content to take the treasure and run. He was angry and wanted revenge!

So he devised a systematic plan to ruin his once-friends / now-enemies with one spectacular move after another.

His systematic revenge was so incredible, it’s the subject of a famous book and movie. 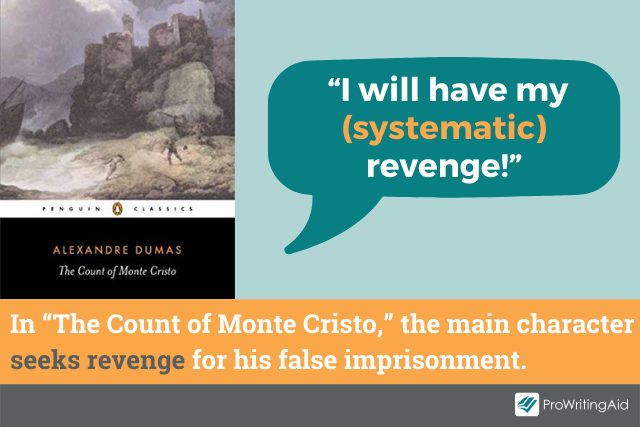 Okay, okay—so Edmond Dantes, aka the Count of Monte Cristo isn’t really my cousin. I am related to the cookie guy though.

What do you think—have you won the game? Did you determine what systematic means?

Macmillan dictionary defines systematic as “done according to a careful plan and in a thoughtful way.”

Since systematic is an adjective, it is used to modify nouns or pronouns. It describes the manner in which a process is implemented and completed according to a plan.

My cousin followed a system of planned steps to eat his cookie and dispose of its wrapper, and Edmond Dantes developed and implemented an organized system for carrying out his revenge.

You could say each of them was:

Those words are synonyms for systematic.

What Are Some Examples of Systematic in a Sentence?

Systematic is not an uncommon word and it fits in a wide range of contexts. Here are some examples of systematic used in a sentence: 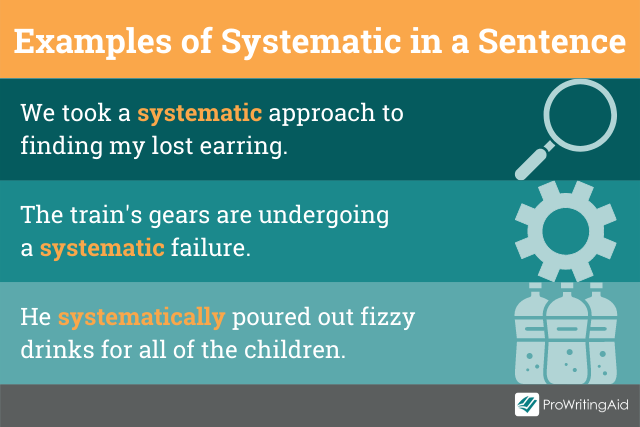 “My systematic approach may well be weeding out someone who could make me my happiest self. But the leaving-it-up-to-fate alternative of relying on chemistry, physical attraction and serendipity hasn’t led me to that person either.” 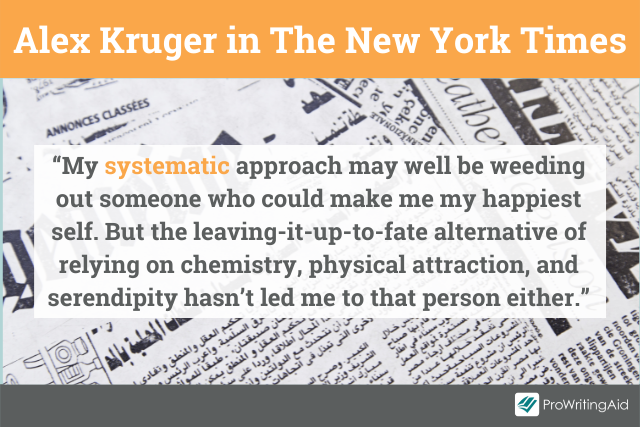 In his article for the Huffington Post, Dr. Mike Hart writes:

“People who start off their day in a systematic stress-free manner are generally very productive people. Below is a list of 10 steps I use every morning to help increase my productivity.”

Jake Dee, of Screenrant, describes the film Judas and the Black Messiah as recounting:

“The true story of real-life Black Panther Fred Hampton and the FBI’s systematic takedown of the civil rights movement he led during the late 1960s.”

How Do I Use Systematically in a Sentence?

Systematically is simply the adverb form of systematic, and is used at least as frequently.

Adverbs modify verbs, adjectives, and other adverbs. as an adverb, systematically is mainly used to explain “how?” a process is completed. On the other hand, systematic (an adjective) is used to describe “what kind” of process if being completed.

In the above example, systematic describes what kind of process. Since process is a noun, systematic is an adjective modifying that noun.

If you’re ever unsure which to use, you can rely on ProWritingAid’s Style Report to help you out! 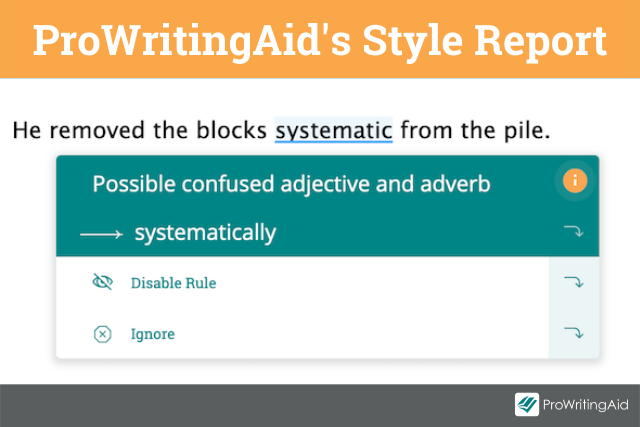 Download ProWritingAid’s browser extension so you can be sure you’re using the right word wherever you write.

What Does Systemic Mean?

I don’t have a cute story for systemic, unfortunately. That’s appropriate though, as you’ve likely seen or heard the word systemic used in more serious or problematic contexts.

For example, we hear about systemic problems, issues, damage, diseases.

You know when your computer just shuts you out? You can’t email, Internet search, or even type up a document? You’ve got a systemic failure happening.

Systemic change may promise better days, but of course, those changes are likely needed because of existing systemic problems.

Systemic means common to a system or relating to a whole system.

If a problem, issue, or disease is systemic, that means it affects the entirety of that system. That system could be a business, government, a social organization or structure, or body system, etc. 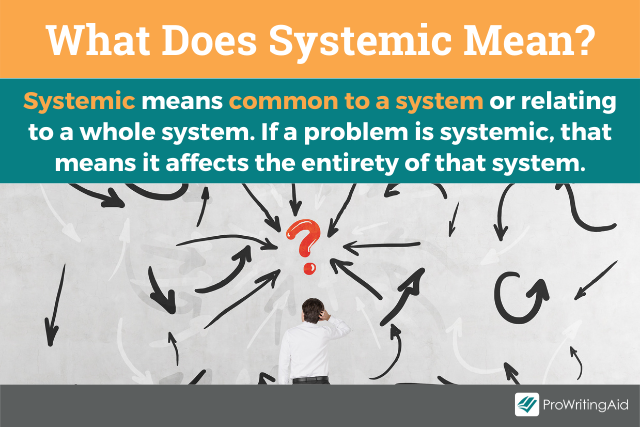 What Are Some Examples of Systemic in a Sentence?

Since systemic means that an entire system is affected, it makes sense that the adjective is used to describe situations that have heavy implications.

Here are some examples of using systemic in a sentence:

“Climate change poses a ‘slow motion’ systemic threat to the stability of the U.S. financial system…”

"’Our analysis rules out all the factors that are typically associated with home value and still finds a significant difference between the values of otherwise nearly identical homes in similar Black and White neighborhoods,’ said... Reginald Edwards. ‘We're left with bias and systemic racism to explain the variation in home values.’"

“According to the publication, Janette Wipper... claims that Google’s labor practices include ‘systemic compensation disparities against women pretty much across the entire workforce.’”

What's the Difference Between Systemic and Systematic? 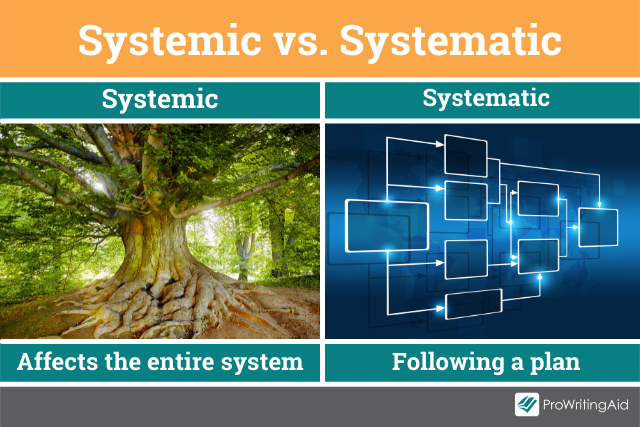 Here are a couple of simple statements to help you remember the difference between systematic and systemic.

If your point is to describe something as methodical or organized, or intentional, you would call that something systematic.

If your point is to say something has comprehensive effects on an entire system (whether that system is physical, social, political, etc.), you would describe that something as systemic.

How Can I Remember the Difference Between Systemic and Systematic?

The best way to remember the difference is to practice.

Ready to test your knowledge on the difference between systematic and systemic?

I have full confidence in you; don’t forget to check your answers and pat yourself on the back!