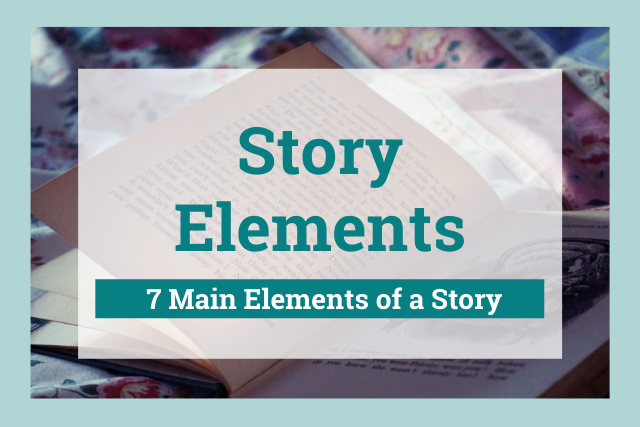 Whether it’s a short story, novel, or play, every type of story has the same basic elements.

Today, we’re taking a look at the seven key elements of a story, as well as the five elements of plot. Knowing these essential elements will ensure that your story is well-developed and engaging.

What Are the 7 Literary Elements of a Story?

There are seven basic elements of a story, and they all work together. There’s no particular order of importance because they are all necessary.

When you’re writing a story, you might start with one and develop the others later. For instance, you might create a character before you have a plot or setting.

There’s no correct place to start—as long as you have all seven elements by the end, you’ve got a story.

There are short stories and even some plays that have only one character, but most stories have several characters. Not every minor character needs to be well-developed and have a story arc, but your major players should.

Your characters don’t have to be human or humanoid, either. Animals or supernatural elements can be characters, too!

Your story must take place somewhere. Setting is where and when the story takes place, the physical location and time period.. Some stories have only one setting, while others have several settings.

Setting also includes time periods. This might be a year or an era. You can be less specific in your time period, like “modern-day” or “near future,” but it is still an important component of your setting.

Our next story element is theme. You can think of theme as the “why” behind the story. What is the big idea? Why did the author write the story, and what message are they trying to convey?

Some common themes in stories include:

Themes can also be warnings, such as the dangers of seeking revenge or the effects of war. Sometimes themes are social criticisms on class, race, gender, or religion.

Tone might be the most complicated of all the story elements. Tone is the overall feeling of your story. A mystery might be foreboding. A women’s literature story might feel nostalgic. A romance might have an optimistic, romantic tone.

Tone should fit both your genre and your individual story. Create tone with writing elements such as word choice, sentence length, and sentence variety. Aspects of the setting, such as the weather, can contribute to tone, as well.

ProWritingAid can help with some of the aspects of tone. In your document settings, change your document type to your genre. The Summary Report will then compare various style aspects to your genre, such as sentence length, emotion tells, and sentence structure. These all play a role in establishing a tone that fits your genre.

Every story needs a point of view (POV). This determines whether we’re seeing something from the narrator’s perspective or a character’s perspective. There are four main points of view in creative writing and literature.

First person tells the story from a character’s perspective using first person pronouns (I, me, my, mine, we, our, ours). The POV does not have to be from the perspective of the main character. For example, in F. Scott Fitzgerald’s The Great Gatsby, the narrator, Nick, is mostly an observer and participant in Gatsby and Daisy’s story.

First person and third person limited points of view are sometimes referred to as deep POV.

If the story is told from the narrator’s perspective, the POV is typically third person omniscient. Omniscient means all-knowing: the narrator sees all and knows all.

Rarely, stories are written in second person (you, yours). This point of view is more common in short stories than novellas or novels. Fanfiction and choose-your-own-adventure stories use second person more often than traditional creative writing does.

There are seven major types of conflict in literature. They are:

Typically, a story has several small conflicts and a large, overarching internal or external conflict. While all the elements of a story are crucial, conflict is the one that makes your story interesting and engaging.

Finally, you can’t have a story without a plot. The plot is the series of events that occur in a story. It’s the beginning, middle, and end. It’s easy to confuse conflict and plot.

Plot is what happens, while conflict is the things standing in the way of different characters’ goals. The two are inextricably linked.

Plot is one of the seven elements of a story, but there are also different elements of plot. We’ll cover this in greater detail in the next section.

What Are the 5 Elements of Plot? 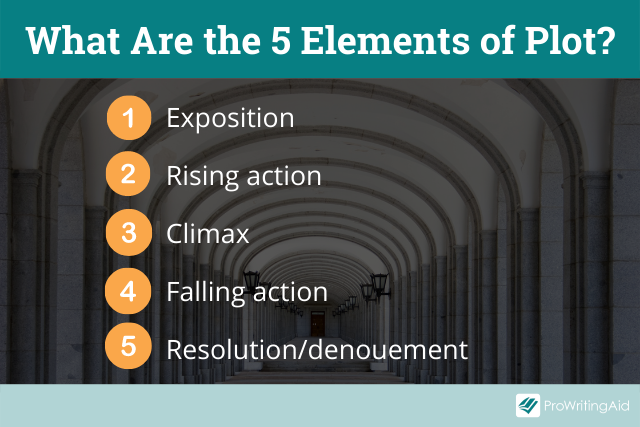 Exposition sets the scene. It’s the beginning of the story where we meet our main character and see what their life is like. It also establishes the setting and tone.

The exposition leads to an event known as the inciting incident. This is the gateway to the rising action. This part of the story contains all of the events that lead to the culmination of all the plot points. We see most of the conflict in this section.

The climax is the height of a story. The character finally faces and usually defeats whatever the major conflict is. Tension builds through the rising action and peaks at the climax.

Sometimes, stories have more than one climax, depending on the plot structure, or if there are two different character arcs.

The end of a story is called the resolution or denouement. All major conflicts are resolved or purposely left open for a cliff-hanger or sequel. In many stories, this is where you find the happily ever after, but a resolution doesn’t have to be happy. It’s the ending of a story arc or plot, and all the questions are answered or intentionally unanswered.

The seven elements of a story and the five elements of plot work together to form a cohesive and complete story arc. No one element is more important than the other. If you’re writing your own story, planning each of the basic story elements and plot points is a great place to start your outline.

yazpatrick
Krystal, this is wonderful! To have it all in one compact tutorial . . . genius.

dr.tan_llanos
With the hand of Our Almighty God, I was brought to this website. This is one of the BEST reading materials I had perused with very substantial contents and scholarly written. Thank you very much for sharing this website for free. I cannot thank you much as I can.

kyle.kucera1
We're so glad to hear you enjoyed our article! :)

kyle.kucera1
We're so glad this article could help you out!

kyle.kucera1
Thank you for your comment! We're glad you enjoyed Krystal's story elements.