How to Spell Words Correctly (in English) 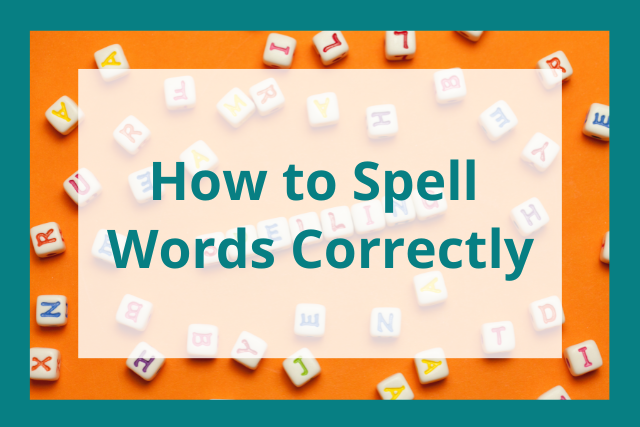 The English language has some complicated spelling rules. While English is a Germanic language, it borrows heavily from Latin, Greek, and other modern languages. This means many words aren’t spelled at all like you would expect!

Luckily, there are some basic spelling rules and tips to help you spell words correctly in English. Keep in mind there are exceptions to every rule, particularly as foreign words become more common in this language. But these guidelines can help you master English spelling.

Keep reading to learn some commonly misspelled words and improve your spelling skills.

Let’s check out some of the most common spelling rules in the English language.

In other words, the letter I comes before the letter E in most cases. The exceptions are usually when they come after the letter C or if the letter combination makes a long /a/ sound.

Of course, it’s easy to find words that break this rule, such as “leisure” and “height.” Use this rhyme as more of a general guideline. 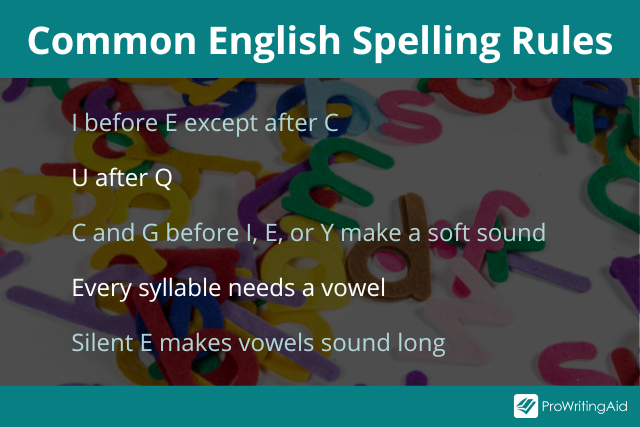 This rule is one of the easiest to learn because the exceptions are few and far between. The letter Q must be followed by the letter U in all English words.

There are several rules that involve the endings of words. First, no words end in V or J.

Typically, if a one-syllable word ends in F, L, or S, you should double that letter. With F and L, the only exceptions are for consonant blends, which is when another consonant precedes the letter. There are more exceptions to the double-S rule, but it’s still a helpful guideline to follow.

If you need to add a suffix to a word that ends in a vowel plus Y, don’t drop any letters. Often, words that end in just Y will drop the letter or replace it with an I before a suffix. But if a vowel precedes the Y, keep all the letters the same (e.g. journey, journeys, journeying).

CK After a Vowel

Learning how to spell words with the /k/ sound is difficult. The letters C, K, CK, QU, and even CH can all make the /k/ sound.

If the /k/ sound follows just one vowel in that syllable, you will usually write a CK, like in the words lackey or duck. Rarely does CK follow another consonant or a double vowel in the same syllable.

C and G Before Vowels

The pronunciation of C and G changes depending on which vowel follows them. They will usually make a soft sound before E, I, and Y. This means C will sound like /s/ and G will sound like /j/. C and G make hard sounds—/k/ and /g/ respectively—before A, O, and U.

For example, city, cede, and cytoplasm use the soft C. The soft G appears in giraffe, gentle, and gym. There are plenty of exceptions, especially with the letter G, but knowing this rule will teach you how to spell most words with C and G.

Every Syllable Needs a Vowel Sound

Almost every word in English requires a vowel. In fact, every syllable requires a vowel sound. Usually, this means A, E, I, O, or U, but sometimes Y acts like a vowel even though it’s a consonant. If your word is missing a vowel, you’ve most likely made a spelling error.

Keep in mind that when U follows Q, it’s not considered a vowel sound. Another vowel is required for any syllable containing QU.

English words have many silent letters, but E plays this role the most. One rule involving the Silent E is vowel-consonant-E. The silent E gives the vowel a long sound, but only if there’s just one consonant between them.

Some words are more commonly misspelled than others. Spelling is even more complicated when you consider differences in English around the world. The correct spelling of a word in British English might be incorrect in American English, and vice versa.

Below are some of the most commonly misspelled words in the English language. We tried to only list words that are the same on both sides of the Atlantic, and we left out most homonyms.

6 Tips on How to Spell

The good news is you don’t have to live your life as a terrible speller. You can learn how to spell words correctly. Here are some tips to help you improve your spelling skills. 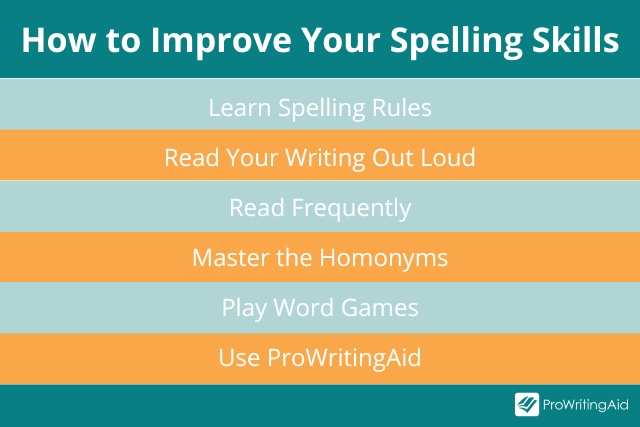 Learning spelling rules is a great way to cut down on spelling errors. You can start by learning the ones listed earlier in this article.

It’s impossible to learn the correct spelling for every word because there are so many rule exceptions, but you can eliminate many of your commonly misspelled words.

Read Your Writing Out Loud

When you’re proofreading your own work, a great trick is reading aloud. When you read aloud, you will find many spelling mistakes because the word just won’t sound right.

There’s a reason your grade school teachers told you to sound out words when you learned to read. Knowing what phonetic sounds correspond to each letter will help you spell correctly.

The more you read, the more your brain will absorb the correct spelling of words. You don’t have to just read books, either. Magazines, news stories, and blogs are all great options.

English has many homonyms, homographs, and homophones. Let’s clarify what these terms mean. Homophones are words that sound the same but have different spellings, while homographs are words with the same spelling but different pronunciations.

Homonyms can be either or both, and often refer to words that have the same spelling and pronunciation but different meanings (like a bow that shoots arrows and a bow on a dress). Some people use the word homonym as a way to reference all the types of similar words.

If you can learn how to spell all the main homonyms, you will eliminate many spelling mistakes in your writing.

Learning how to spell better doesn’t have to feel like school work. Gamify your learning to make it fun!

Spelling board games like Scrabble, Boggle, and Upwords make for a fun game night with friends and family, and they help you practice spelling skills, too!

You can also play word games on your device. Wordle and Letter Boxed are popular online games, or you can opt for classics like crossword puzzles and word searches. There are also apps like Words with Friends and Wordscapes.

Use AI to Help You Write

Even a world spelling bee champion makes mistakes. The best way to find and eliminate errors in your writing is by using a spelling and grammar checker like ProWritingAid.

It’s quick, efficient, and free to check your spelling with our AI-powered technology.

Conclusion: How to Spell Correctly

You don’t have to enter a spelling bee competition to want to improve your spelling. Improving your spelling will make your written communication easier and clearer. By using a few tips and tricks, you can learn how to spell words correctly more often.