Firey vs Fiery: What's the Difference? 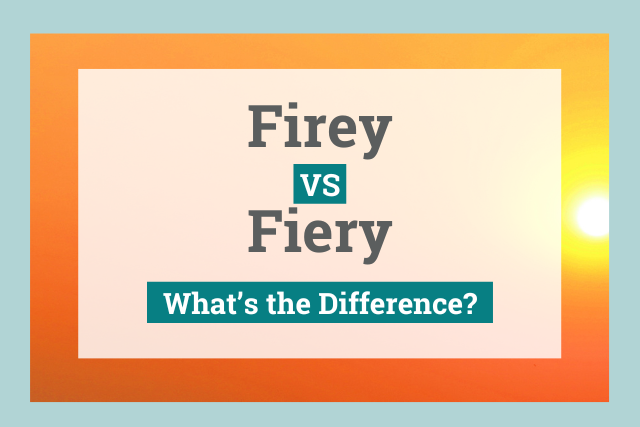 If you’re wondering whether to write fiery or firey, you’re not alone. Many words in the English language are tricky to spell, including this one.

So which spelling are you supposed to use?

The correct spelling is fiery, with the E before the R.

Read on to learn more about what fiery means and how to use this word correctly.

Writing firey instead of fiery is an understandable mistake—after all, this misspelling contains the word fire, which makes intuitive sense. 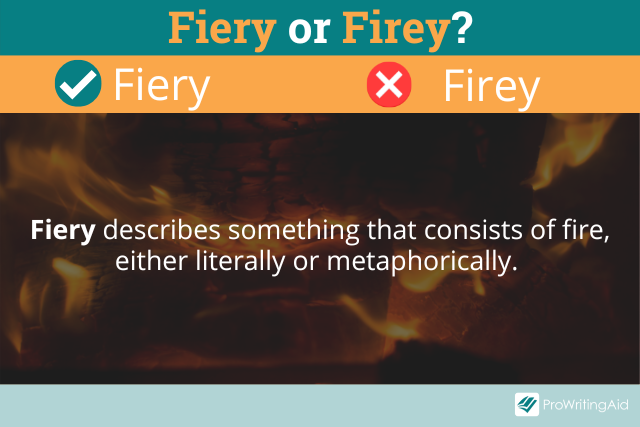 The only exception is a character named Firey in the YouTube web series Battle for Dream Island, so if you’re writing about that character, use the spelling Firey. In all other cases, write fiery.

Quick Definition and Meaning of “Fiery”

We use the word fiery to describe something that consists of fire, either literally or metaphorically.

In a literal sense, you might say a volcano is fiery if it’s burning with flames. You could also describe a color as fiery if it’s a bright, vivid red or orange.

One useful mnemonic to remember the correct spelling is to picture a pier on fire. That way, you can remember that fiery is spelled with the letters I-E-R, just like pier.

Examples of “Fiery” in Sentences

The best way to remember how to use a word is to see it in action! Here are some examples of fiery in sentences from popular English books.

“Never respond to an angry person with a fiery comeback, even if he deserves it... Don’t allow his anger to become your anger.”—Bohdi Sanders, Warrior Wisdom

“That rumor probably got started because Artemis used to call me a big fiery ball of gas.”—Rick Riordan, The Titan’s Curse

“Magnus raised his hands, his fingers shining with individual azure flames. They lit his grin with a fiery blue glow.”—Cassandra Clare, City of Glass

“No one can know sincere happiness, Sophie, without first having known sorrow. One can never appreciate the enormity and rareness of such a fiery bliss without seeing misery, however unfair that may be.”—Fisher Amelie, Vain

“Reminds me of you. Fiery and sweet, all at the same time. A flame in the dark, lighting my way.”—Richelle Mead, The Indigo Spell

“It was extreme joy, it was bone-crushing grief. It was fiery hot, it was icy-cold. It was true love sprouting... it was true love dying.”—S.C. Stephens, Thoughtless

Conclusion on Firey vs Fiery

Now you know how to spell fiery correctly! Remember the trick of picturing a pier in flames, and you’ll spell this word right every time.

If you’re worried about spelling errors, you can always run your work through ProWritingAid, which will highlight misspellings and remind you how to fix them.