Sergeant or Sargent: What’s the Difference? 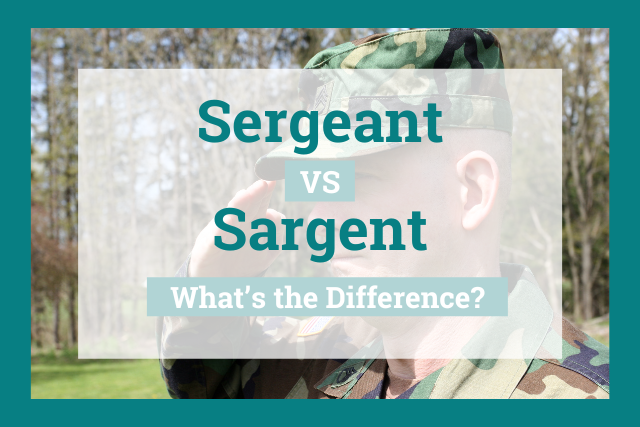 The English language can be tricky, because sometimes words are spelled in unexpected ways. Many people get confused about whether to write sergeant or sargent.

You should always write sergeant, rather than sargent, which is a common misspelling.

Read on to learn more about sargent vs sergeant and how to use this word correctly.

How Do You Spell Sergeant?

Sergeant is a noun that describes a rank in the armed forces or police.

It’s always spelled with one E in the first syllable and an EA in the second syllable.

How Do You Spell Sergeant in the Army?

You can use sergeant to describe non-commissioned officer ranks in non-naval military forces, such as the army and air force.

Non-commissioned officers are military officers who have earned their positions by getting promoted through the enlisted ranks.

For example, you might write, “The sergeant led the soldiers through their morning drills.”

Many armies also have more senior ranks that include the word sergeant, such as first sergeant, staff sergeant, and sergeant major. 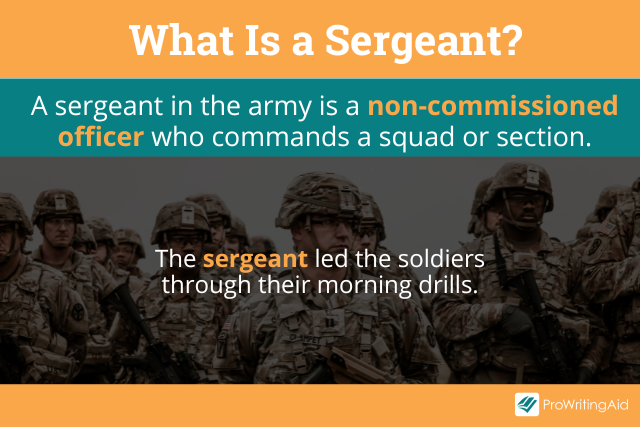 How Do You Spell Police Sergeant?

When you use the word sergeant to describe a rank in policing forces, you should spell it the same way you do to describe an army rank.

For example, you might write, “The police sergeant arrested the criminal yesterday.” 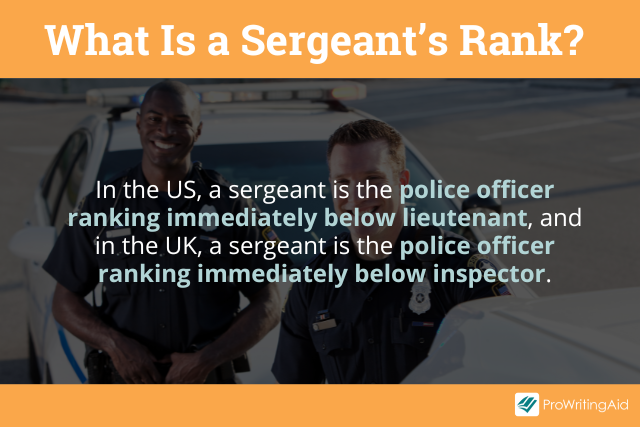 You might see sergeant abbreviated as Sgt. when used in a named person’s title, in the same way you might abbreviate mister to Mr. when it comes in front of someone’s name.

For example, you might write, “My squadron is commanded by Sgt. Chang.” In this case, the abbreviation is appropriate because you’re describing someone’s formal title.

Let’s look at some examples of how to use sergeant in a sentence.

“I choke back a laugh, which ends up spilling out when my teammates snap to attention like they’ve been issued a command by a drill sergeant.”—Elle Kennedy, The Deal

“Sergeant Colon of the Ankh-Morpork City Guard was on duty. He was guarding the Brass Bridge, the main link between Ankh and Morpork.”—Terry Pratchett, Reaper Man

“The mace prodded Will in the back again. That little habit was starting to annoy him and he was tempted to take the weapon from the sergeant major and do a little prodding of his own.”—John Flanagan, The Sorcerer of the North

Now you know the right way to spell sergeant! When in doubt, ProWritingAid can help you make sure you’re spelling all your words correctly, including correcting sargent to sergeant.

tilacja
Curiously, it’s common to shorten to “sarge” rather than to “serge” when writing down the rank.

kyle.kucera1
Thanks for your comment! Yes, it's rather interesting to see how the different terminology is used.