Have vs Has: What's the Difference? 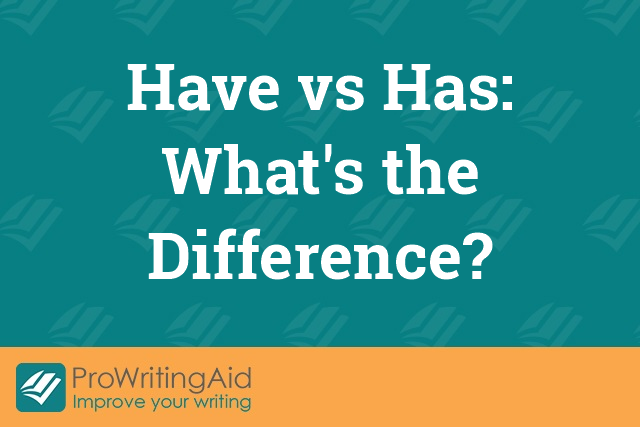 You probably use has and have often, but do you know the grammar rules behind how you use them?

Take this pair of sentences: which one is correct?

If you’re not using a third person pronoun, like he, she, or it, or a name, you can almost always use "have." Keep reading for the exceptions.

We’ll use the tips in this article to find out the answer and learn when to use has vs. have.

What Is the Difference Between Have and Has?

The words "has" and "have" both come from the verb "to have."

To have means to possess or hold something. It also means to experience or undergo something. "Has" and "have" both mean the same thing as "to have."

So why are there two different versions of the word?

When Should I Use Have or Has?

It’s all to do with who we are talking about. Whether you use have or has depends on the point of view you are using. Luckily, you only use has when talking in the third-person singular (that’s grammar jargon for using he, she, or it in a sentence).

If you’re not using he, she, or it, you can almost always use "have." Keep reading for the exceptions.

First, let’s look at some examples of when to use has and have.

When Do I Use Have?

In all three of the examples above, have is used to indicate ownership.

Now take a look at these:

In these examples, have is used to show that the subject of the sentence (I, you, they) has been through an experience (seeing the movie, going to a place, working on a project). 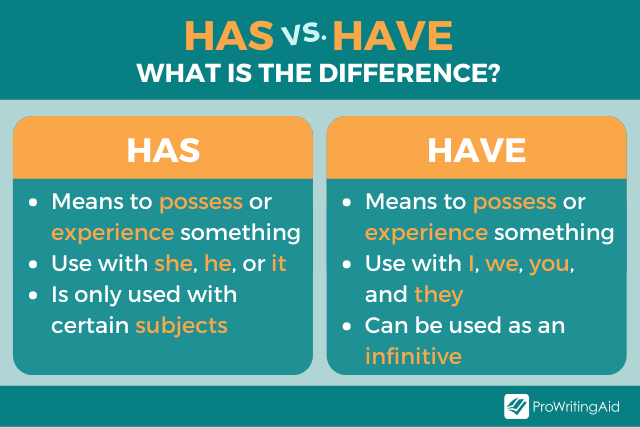 When Do I Use Has?

We use has when talking about someone or something else in the third person singular. That means that if you’re referring to just one person or thing, and you’re not using "I" or "you" to refer to them, you need to use has.

As before, in all of those examples has indicates ownership.

Now take a look at these:

In these examples, has shows that the subject (she, he, or it) have experienced something (been to school) or undergone a change (learned to crochet, fallen over).

Are Has and Have Singular or Plural?

Seems simple, right? However, this can get tricky when you’re talking about a group of people, a team, or a company.

If you’re referring to a group of people with the pronoun everyone or everybody, you need to use has:

But if you’re referring to a general group such as children, people, and the media, you’ll need have: 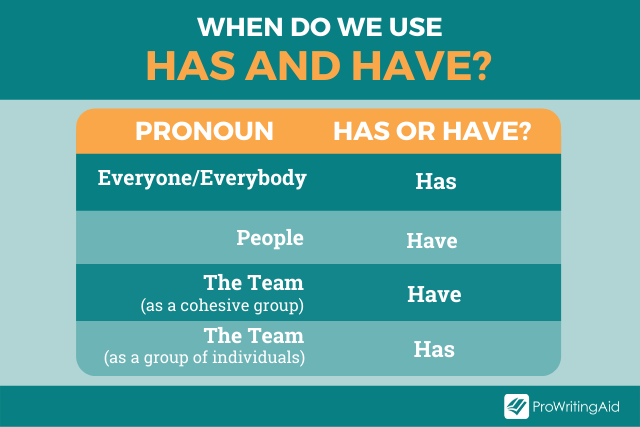 If you’re using a collective term, like family, team, company, or group, you can use has or have. This is because we can view these terms as one single group, or as a collection of individuals.

Do I Use Has or Have with a Name?

When you refer to an individual by name, you’re using the third person singular—that means you use has.

That’s because names take the place of "he" or "she" (or any other singular pronoun, like the non-binary pronoun, "they") in a sentence.

Now we have the answer to our earlier question. It’s Peter has a dog, not Peter have a dog.

It’s she should have. Even though we are using she, which usually goes with has, the verb should has special rules.

That’s because it’s a modal verb. We won't get into those here, but you should know that if you always use have after a modal verb.

Here are the verbs to look out for: 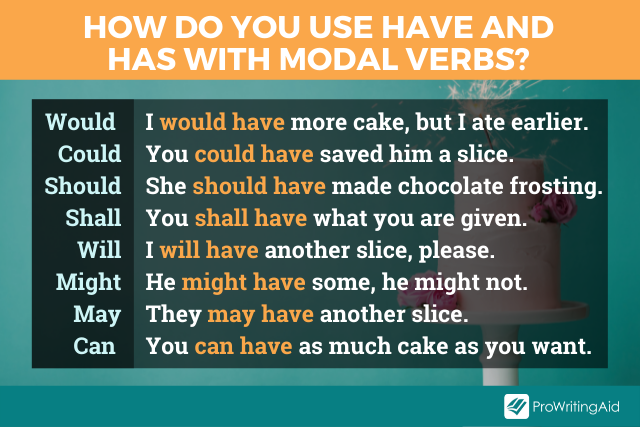 What Tense Are Have and Has?

We can use the words have and has to make a few different tenses. This can get a bit complicated, but we’ll start simple.

If you are speaking about someone owning something in the present tense, you’ll use have or has with the same rules as before:

This is known as the simple present tense.

If you want to say that someone owned something in the past (but not necessarily now), use had. Had is the past tense version of have/has:

This is known as the simple past tense.

You can also use has, have, and had to create more complex tenses.

If you want to refer to something that started in the past and continues into the present, use have or has with the same rules as before plus an -ing verb:

When Do You Use "Was Having" or "Had Been Having"?

If someone began owning or experiencing something in the past, and this was still happening when another event occurred, use was / were having, like this:

If you want to describe a continuing experience that occurred before a particular time in the past, use had been having: 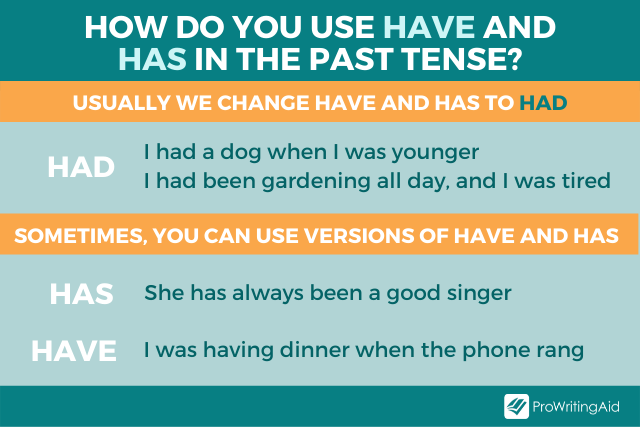 Is It Grammatically Correct to Write "Had Had"?

If you or someone else finished doing something before a specific point, you’ll need to use "had" before the action:

This can look a bit weird if you want to say that you or someone else had finished owning or experiencing something before a point:

In all of these examples, it is correct to say "had had."

If you’re worried about using have and has in your sentence, try ProWritingAid. It works anywhere you write, and will let you know if you’ve used the wrong word: 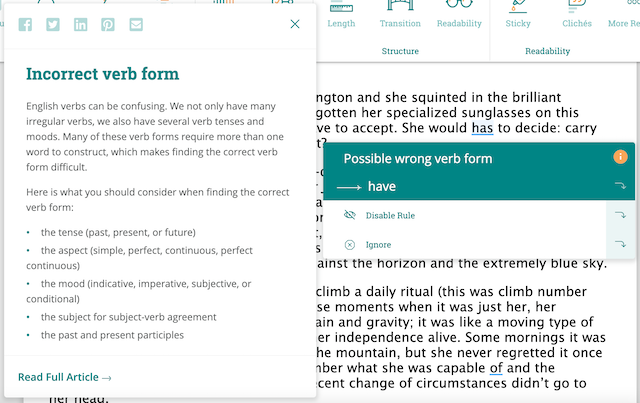 What Is the Difference Between Have, Has, and Must?

On their own, have and has don’t mean the same thing as must.

However, the phrases have to or has to do mean the same thing as must. You can use have to / has to and must interchangeably, however sometimes must is more compelling.

While these sentences technically mean the same thing, using must in the second example sets a more commanding tone—the speaker is telling the listener what they must do.

Here are some more examples of have to and has to in a sentence: 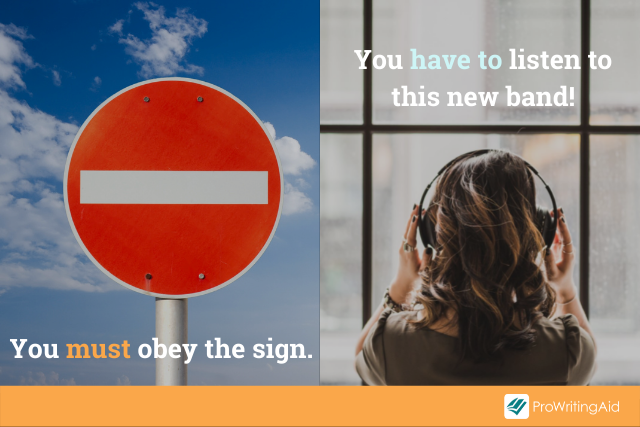 Can I Use Have and Has in the Same Sentence?

You might also use the phrase "has to have" in your sentence to mean "must have":

What Is the Difference Between Hasn’t and Haven’t?

Hasn’t and haven’t are negative contractions of has and have. They mean "has not" and "have not" respectively.

Remember, if you can replace the subject of the sentence (the thing doing the having or not having) with it, use hasn’t—like with "the shop" in the example above.

What Are Some Examples of Has or Have in a Sentence?

Let’s finish up with a quick-fire round of some common phrases that use has or have.

It’s does have. This is because the verb to do (which turns into does, did, etc.) requires you to use the root form of any verb you put after it.

This sounds confusing, but all it means is that you need to use "have" after any version of the word "do" :

This follows the same pattern as above. "Did" is the past tense version of the word "do," so the answer is did it have. 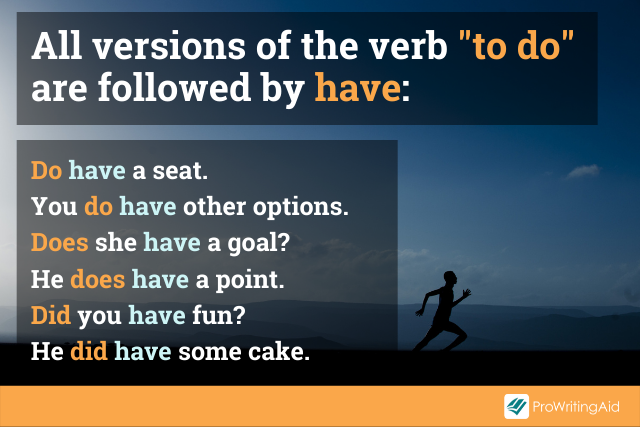 Someone is a singular pronoun, like he or she. That means that, in most cases, we use has.

However, if you’re asking a question beginning with "Does," you need to use have, as above:

This depends on the subject of your sentence. Remember, we only use "which" with non-human subjects.

Have You Got It?

Now you know how to use have and has in your sentences. Remember, before you decide which one to use, check your tense and who you’re talking about.