Commas are one of the trickiest punctuation marks because there are so many rules.

We’ve rounded up the top ten comma punctuation rules you should know.

How Do You Use Commas Correctly?

Commas often denote a slight pause in writing. Their primary function is to represent logical places for breaths in a spoken sentence.

But sometimes, we pause when speaking without a comma, and many times we use commas when we wouldn’t pause.

Over time, commas have evolved to have more functions than any other punctuation mark. 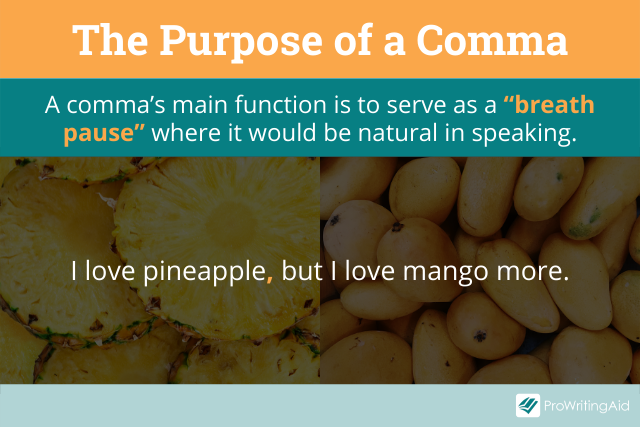 The important thing to remember is that, even though it might seem like commas are everywhere, they do have specific rules.

Don’t just place commas randomly or put them where you think a breath pause belongs. Follow comma rules to use them correctly.

Of course, even the most experienced writers and grammar lovers sometimes get confused with so many rules. A free grammar checker like ProWritingAid can help you use commas correctly when you aren’t sure where to put them.

10 Comma Punctuation Rules (When to Use)

Although there are some less common rules, most of your comma usage will fall under one of these ten rules. 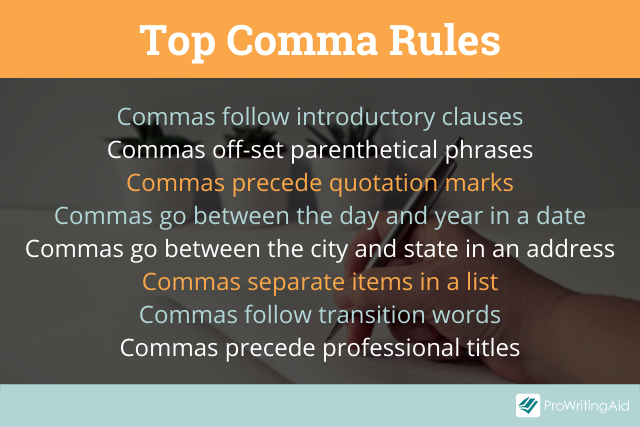 Commas can connect two independent clauses when accompanied by a coordinating conjunction.

An independent clause has a subject, a verb, expresses a complete thought, and can stand alone as a complete sentence.

When two independent clauses are combined into one sentence, we call this a compound sentence.

There are two ways to create compound sentences. The first is with a semicolon. The second, and most common way, is with a comma and coordinating conjunction. 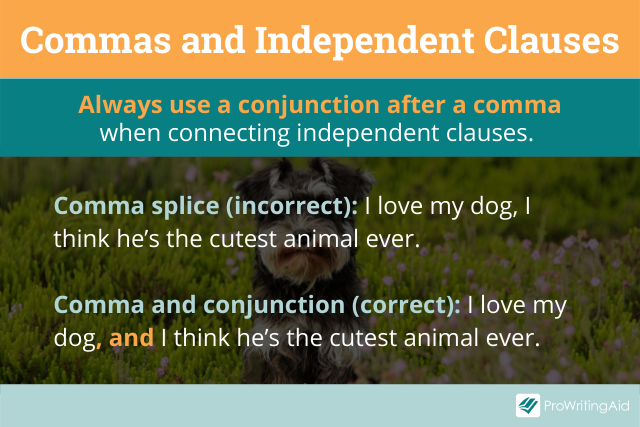 When a comma connects two independent clauses, you need to add the conjunction. Without a conjunction, you are left with a comma splice which is grammatically incorrect. 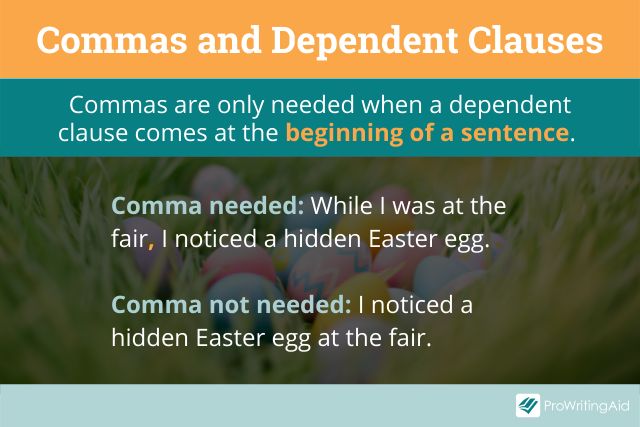 If there are two or more independent clauses and one or more dependent clauses, it’s called a compound-complex sentence. The comma rule is the same for both sentence types.

Here is an example:

Let’s look at this example of comma usage with an introductory phrase that is not a clause.

Commas can set apart phrases in a sentence that don’t fit with the main clause. You might otherwise set these phrases apart with parentheses, colons, or em dashes.

There are several types of parenthetical phrases that commas can set apart.

Second we have restrictive phrases that contain essential information and do not use commas.

The first sentence is restrictive and does not use commas because we need to know which man went to prison.

The second sentence has a non-restrictive clause because we already know a bank robber received ten years. Which bank he robbed is non-essential information, so we set this clause apart with commas.

Appositive adjectives, a type of non-restrictive phrase, describe a noun with one adjective or a list of them. We also set these apart with commas.

The adjectives are providing extra information about why the dad is good. They are non-essential, so use a comma to set them off from the rest of the sentence.

We also use commas to separate interjections in sentences. Use commas regardless of whether the interjection is at the beginning or middle of a sentence. Check out these examples. 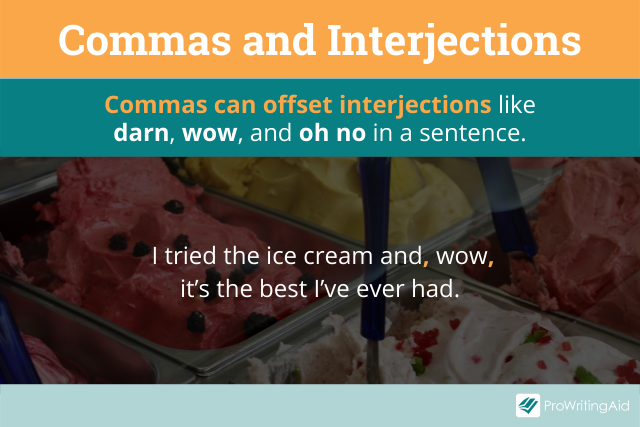 Use a comma before the quotation marks if a quote is at the end of a sentence.

If the quote is at the beginning of a sentence, place the comma just before the closing quotation mark.

Sometimes we use quotation marks around titles instead of dialogue or quotes. We typically denote short works like articles, short stories, and songs with quotation marks.

Whether you use commas before introducing titles in quotes depends on the style guide you are using, so defer to the style guide. Here’s what we mean:

Neither are correct nor incorrect. However, if we left out the modifier “the song,” we never use a comma: I love “Never Gonna Give You Up.” 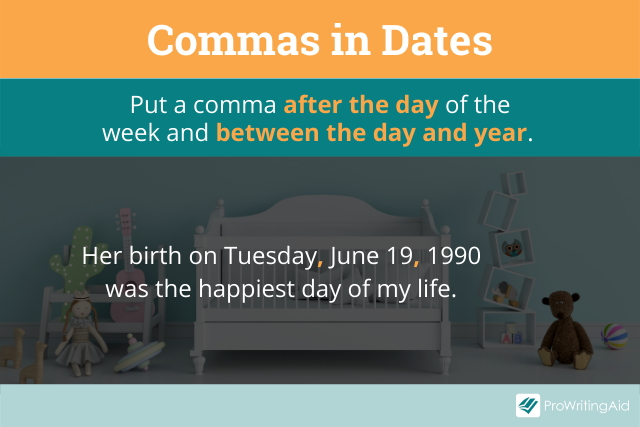 We use commas when we write dates. There are several ways to write dates, so let’s look at a few of them.

If you’re only writing out the date, and it’s not in a sentence, place the comma after the day and before the year. If you are leaving off the year, no comma is necessary.

We use the same rules if we place a date within a sentence. You will also place a comma after the year in a sentence if there is a day of the week listed.

Please note that the comma within the date only applies to the month-day-year format. The inverted day-month-year format, commonly used in the UK, does not need a comma after the month or date, e.g. 19 June 1990.

We use commas when we write addresses. When you’re addressing a letter, place a comma between the city and state. No other commas are required.

Sometimes we need to write addresses in a single line. In this case, place commas in the following places.

If you write an address within a sentence, follow these same rules. If the address is in the middle of a sentence, add a comma after the zip code. 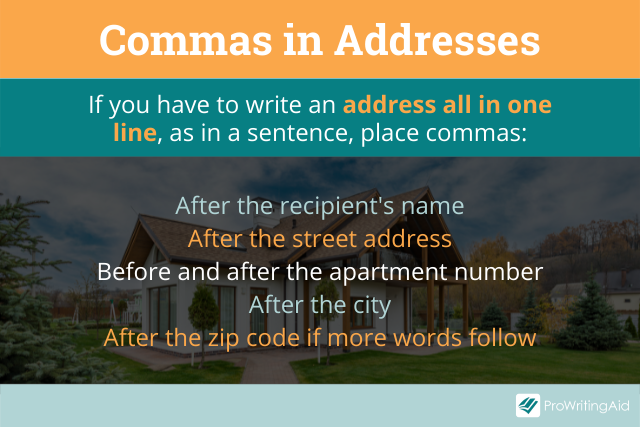 When the city and state are mentioned in the middle of a sentence, use a comma after the state. This applies regardless of whether you use the state abbreviation or spell out the state name.

If the address is at the end of the sentence, just use the correct ending punctuation.

Commas separate items in a list. We place a comma between each item in a list. However, the final comma, or the comma before the conjunction, is a highly debated rule in English grammar.

This final comma is called an Oxford comma or a serial comma. You can choose to use the serial comma or not; both are grammatically correct.

Here’s an example of a sentence with the Oxford comma:

Here’s what that sentence would look like without the serial comma:

It’s becoming more widely accepted to use a comma before the conjunction.

Whether you choose to use the Oxford comma or omit it, be consistent. ProWritingAid’s Consistency Report can make sure whichever way you choose is consistent in your writing.

We use commas after transition words or phrases and before the rest of the sentence. Transition words include however, therefore, finally, or for example.

We use commas to set transition words off when they occur in the middle of a sentence or the end of a sentence, as well. 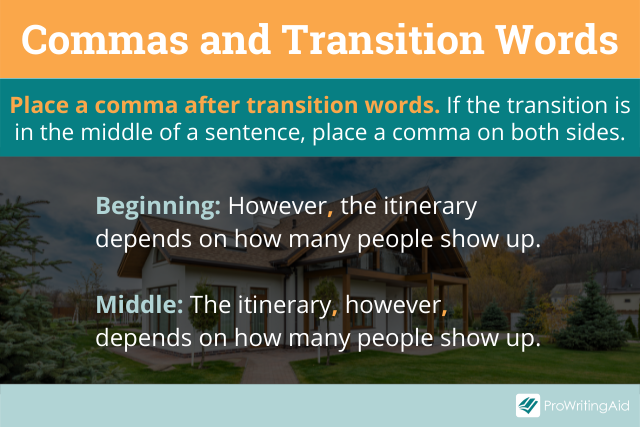 We use commas in ordinal numbers between hundreds, thousands, millions, etc.

In non-math terms, that’s every three places except in numbers under 1,000. Here are some examples of how to use commas in numbers.

10) Commas in Names and Titles

A comma separates a person’s academic or professional title from their name. If the name and title are in the middle of a sentence, place a comma after the title, too.

That’s a lot of comma rules to learn! The best way to understand comma punctuation rules is to see them in action. Let’s check out a few more examples of how to use commas in sentences.

Comma rules don’t have to be scary or annoying. Knowing these top ten comma rules will help your writing read clearly and correctly.