Comma Splice: What It Is and How to Fix It (with Examples) 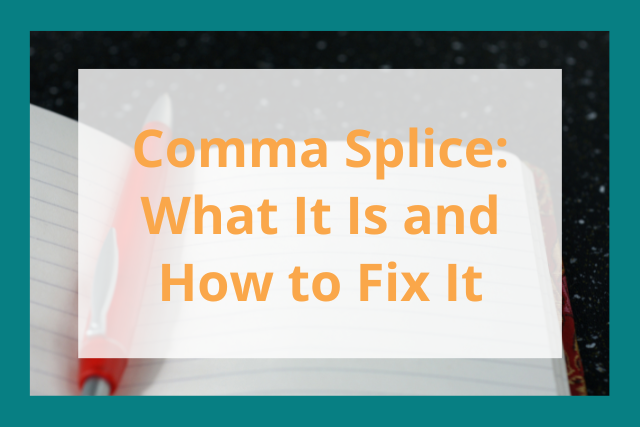 One of the most common comma errors writers make is the comma splice. A comma splice occurs when you combine two independent clauses with only a comma.

If comma rules confuse you, run your writing through ProWritingAid’s grammar checker. It will find all your missed and misplaced commas, including any comma splices, so your writing can be error free.

In this article, we’ll look at what a comma splice is, why you should avoid it, and how to fix it in your writing.

What Is a Comma Splice?

To understand comma splices, you need to understand independent clauses. Let’s have a quick refresher.

These clauses are incorrectly joined. They need to be separate sentences or be connected by a different punctuation mark, like a semicolon. You can also add a coordinating conjunction after the comma. 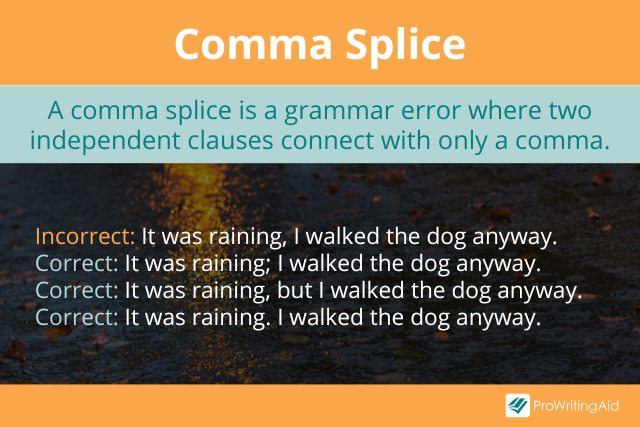 Why Should You Avoid Comma Splices?

When you’re connecting two independent clauses, a larger pause is necessary. If you don’t want a full pause, you can use another type of punctuation mark.

Comma splices will make your audience read too fast, which can result in confusion and affect overall readability.

When Can You Use a Comma Splice?

Many writers wonder if it’s ever acceptable to use a comma splice. The answer is that it depends on who you ask.

Fiction writers and other creative writers have more leniency with grammar rules. Some writers use comma splices to show closely related concepts, racing thoughts, or contrast.

You can find examples of well-placed comma splices in many works of great literature. But as a rule, modern editors hate them.

Still, some writing authorities allow comma splices as a stylistic choice when used sparingly. Even The Elements of Style says that it’s sometimes the best way to punctuate short thoughts.

A common example of when it’s more acceptable to use a comma splice is in serialized sentences with three or more clauses. In this case, however, the comma splice is functioning more like a serial comma.

Some copyeditors prefer semicolons in those types of serialized lists. Always check your style guide if you have one available.

But in most cases, you should avoid comma splices. There are many ways you can rework a sentence to leave out a splice.

In short, comma splices are always grammatically incorrect, but some writing experts accept them as a stylistic choice in limited circumstances. If you aren’t sure whether to use one, it is probably best to leave it out.

Examples of Comma Splice in Sentences

Let’s look at some famous examples of comma splices in sentences:

“I came, I saw, I conquered.”—Julius Caesar

“By day the goldfinches dip in yellow light, by night the frogs sing the song that never goes out of favor.”—E.B. White, A Report in the Spring

How to Fix a Comma Splice (with Examples)

There are several ways to fix a comma splice. Let’s examine each using our earlier example of: “It was raining, I walked the dog anyway.”

The easiest way to fix a comma splice is to separate your independent clauses into different sentences using appropriate end marks. This could be a period, an exclamation mark, or a question mark, depending on the context.

A semicolon can connect two independent clauses without making them into separate sentences. There is no need to add a conjunction.

You can also choose to rewrite your sentences entirely to correct comma splices. You may need to rearrange words or add words.

Use an Em Dash or Colon

Semicolons aren’t the only punctuation marks that can connect independent clauses. Both em dashes and colons can, too, depending on the context.

Em dashes are longer pauses. They can add emphasis or set information apart. You can use them to set the tone with slower pacing. In the example below, the longer pause adds an air of exasperation or regret.

Our previous example doesn’t lend itself to a colon, so here’s another example:

In sum, it’s important to avoid comma splices because they affect the pacing and readability of your writing.

Instead, you should use one of the several ways to fix a comma splice when connecting two independent clauses.