Blog Grammar Rules What Is A Complex Sentence? Explanation, Types And Examples

What Is A Complex Sentence? Explanation, Types And Examples 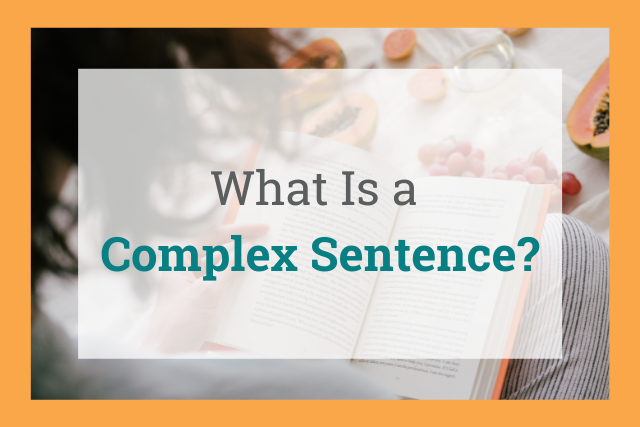 There are four categories of sentences: simple, compound, complex, and compound-complex. Each type of sentence has its own essential ingredients.

As you continue reading, I’ll show you how you can mix those two ingredients (the independent and dependent clauses) in different ways to whip up complex sentences.

What are Complex Sentences?

Because my pizza was cold, I put it in the microwave.

Before we get further into examples of complex sentences, let’s do a quick refresher on clauses. 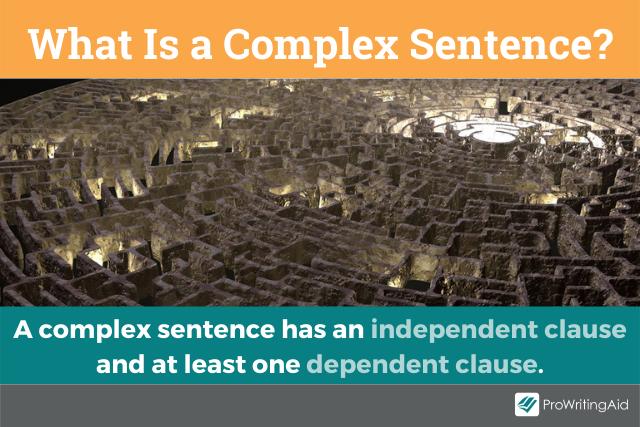 What are Independent and Dependent Clauses?

A clause is a group of words that contains a subject and a verb.

What Is an Independent Clause?

An independent clause includes a subject and a verb, and expresses a complete thought—just like a simple sentence does.

An independent clause makes sense on its own. In these examples, the subjects and verbs are in bold. 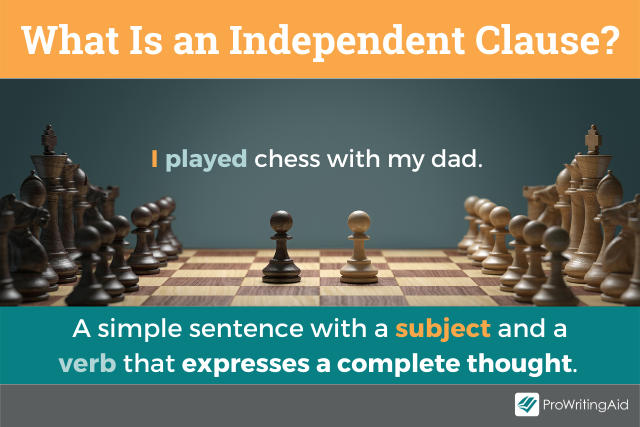 What Is A Dependent Clause?

A dependent clause also contains a subject and a verb, but does not express a complete thought.

These relationships include cause/effect, time, place, condition, comparison, and concession.

In these examples of dependent clauses, the subjects and verbs are in bold, and the subordinating conjunctions are highlighted.

Did you notice the difference between these examples and the independent clauses?

With the independent clauses, we know what’s happening by the end of the sentence. This poor person, let’s call her Joanne, has had a lousy day.

With the dependent clauses, we are “left hanging,” and it seems as if Joanne’s day may have gotten even worse!

I wish we could find out if she at least got home safely on her forgotten birthday! 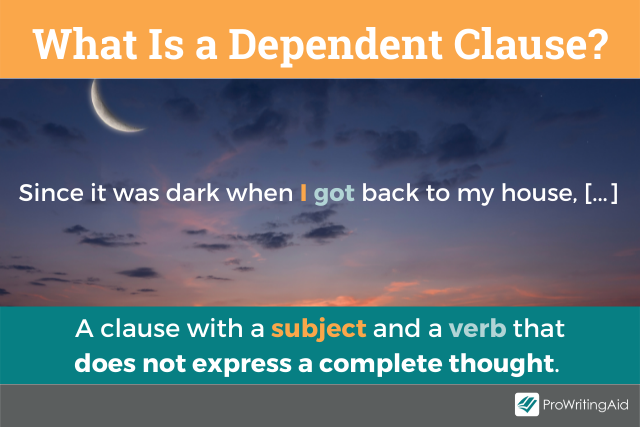 Actually, I think I have a solution. We can use those dependent clauses as one of the ingredients in our about-to-be-created complex sentences. Then we’ll get the complete story.

How to Create Complex Sentences

Complex sentences include an independent and at least one dependent clause.

In a complex sentence, the independent and dependent clauses can be put together in a variety of ways. For example:

Dependent followed by independent: In this format, put a comma after the dependent clause.

(The dependent clause tells us why Joanne wanted to get home)

Independent followed by dependent: In this format, no comma is needed.

Dependent both before and after independent: In this format, a comma is required after the first dependent clause.

(The dependent clauses tell us when Joanne experienced that sense)

Do you see how those ingredients work together to create a complete thought?

Here are a couple more examples to let you know what ultimately happened at the end of Joanne’s lousy day.

Take notice of their respective structures—the order of the independent (IC) and dependent clauses (DC), and where the commas (if needed) appear.

Happy Birthday Joanne! To celebrate, I’ll show you one more way to structure a complex sentence. 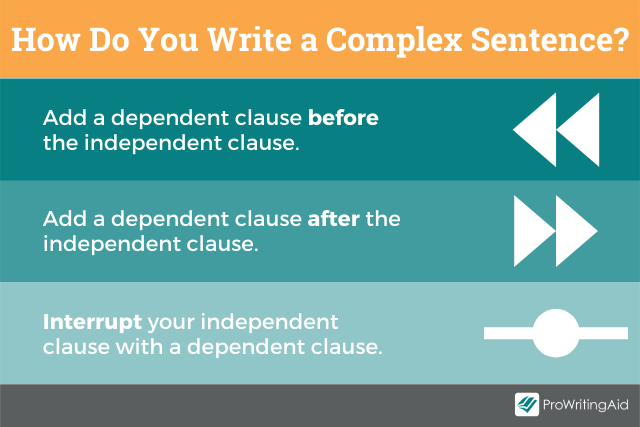 What’s The Difference Between Complex and Compound Sentences? 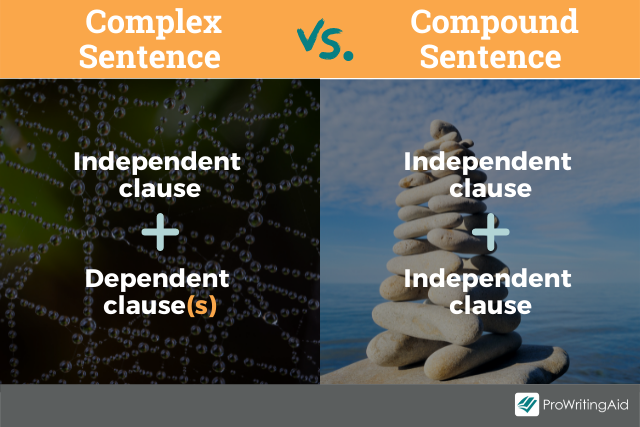 In a compound sentence, the independent clauses can either be joined with a semicolon or with a comma + coordinating conjunction combination.

A semicolon has the combined power of both a period and a comma. It is strong enough to create a stop—a distinction—between two independent clauses, but is more gentle than a period.

The semicolon doesn’t create a full stop; it maintains a connection between the clauses, which is where you see its comma function.

You would use a semicolon when your independent clauses are closely related and you don’t want to create a full stop between them.

Coordinating conjunctions connect words, phrases, or clauses that are of equal value, such as two independent clauses.

Each of those clauses can stand on its own as a sentence.

The seven coordinating conjunctions are and, but, or, nor, so, yet, for.

A comma alone isn’t enough and produces an error called a comma splice.

In each of the following examples, the coordinating conjunction + comma combination is in bold.

What’s The Difference Between Complex and Compound-Complex Sentences? 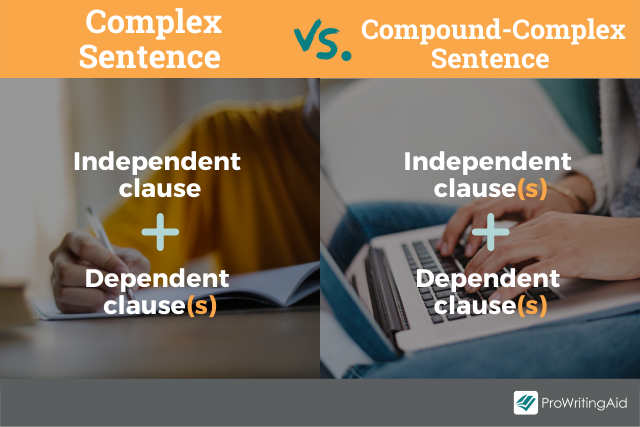 In these examples, the independent clauses are in bold.

How Complex Sentences Help Your Writing

Adding variety to your sentence structure is important to good writing. If you rely too much on one style of sentence, your work will become monotonous and take on a droning effect. No one wants that!

By understanding how complex sentences work, you can add them to your work with confidence.

And if you need a boost for your confidence while you’re still practicing, run your work through ProWritingAid’s Sentence Structure Report.

It will help you see where your sentence structure may be repetitive and offer suggestions for how to add some variety.

Although the example below provides some really interesting details, the structure is repetitive, in fact, all the sentences start with a subject.

Including complex and varied sentence structures is essential if you want to keep your reader's attention.

Try the Sentence Structure report with a free ProWritingAid account.

As a writer, it’s important to understand the tools of your trade. Sentence structure is one of those tools.

Take the time to notice how other writers use simple, compound, complex, and compound-complex sentences in their work.

Observe and learn as you read and then be inspired!