ProWritingAid
ProWritingAid
The Grammar Guide Spelling What is the difference between 'complement' and 'compliment'?

What is the difference between 'complement' and 'compliment'? The words complement and compliment are often confused because of their similar spelling. Do you know the difference?

Complement means something (or someone) that completes; the consummation when used as a noun.

Complement is also used as a verb. It means to complete, to bring to perfection, to make whole.

Compliment means an expression of praise, congratulation, encouragement, or respect when used as a noun. 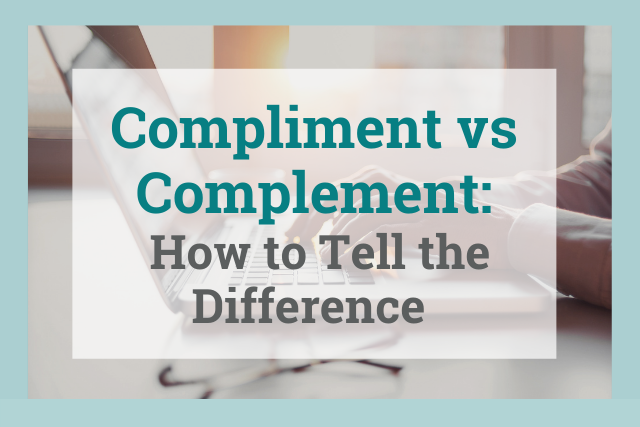 English is full of words that are spelt the same, with the exception of one letter. That’s what happens when you switch compliment to complement. The two words sound alike, but the switch from i to e changes the meaning.

What Is the Difference Between Compliment and Complement?

Compliment means to make a positive remark about something.

What Does Complement Mean? 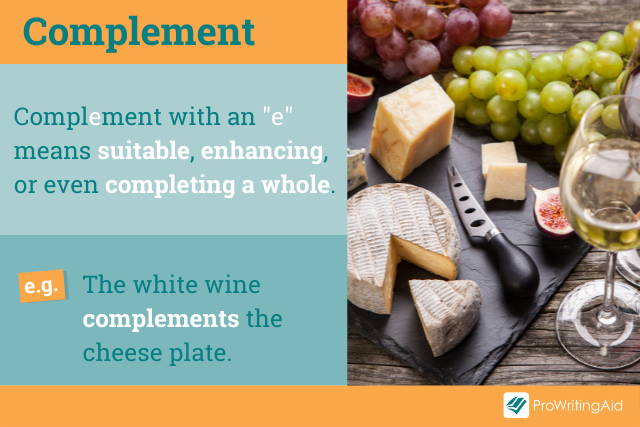 The word complement is both a noun and verb. A noun is a person, place, or thing, while a verb is action.

As a noun, complement has two meanings. Let’s look at each.

How Do You Use the Word Complement in a Sentence?

How Do I Use Complement as a Noun?

The first definition of complement as a noun is something that completes or brings something else to perfection.

Here’s an example in a sentence:

Synonyms that can help you understand this version of complement as a noun:

The second use of complement as a noun implies a number or quantity of something. Usually, that means the number of items required to make a group complete.

Here’s an example of complement as a noun with the second meaning: 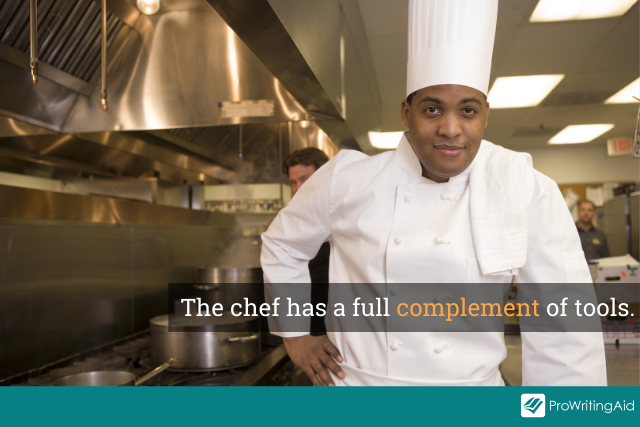 Synonyms of complement as a noun with the second meaning:

How Do I Use Complement as a Verb?

Use complement as a verb to imply adding to something to enhance or improve it—i.e. making something perfect.

Synonyms to help you understand complement as a verb: 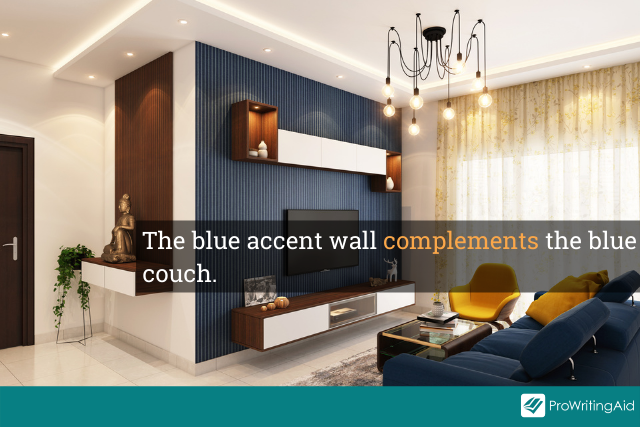 Here are some example sentences using the word complement.

What Does Compliment Mean? 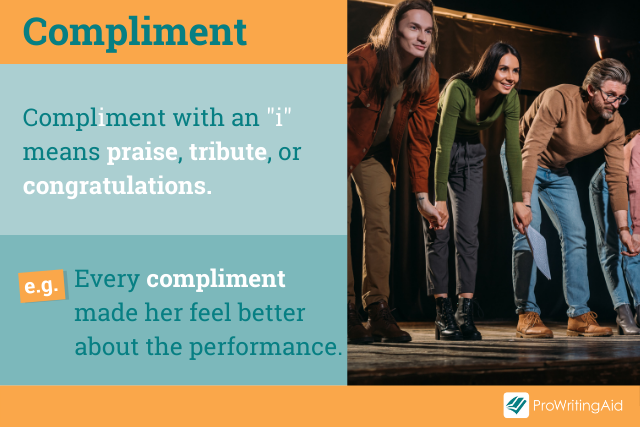 The word compliment also works in grammar as either a noun or a verb.

How Do I Use Compliment as a Noun?

As a noun, compliment means an expression of admiration or praise.

Example of compliment as a noun:

Here are some synonyms to broaden your understanding of compliment as a noun: 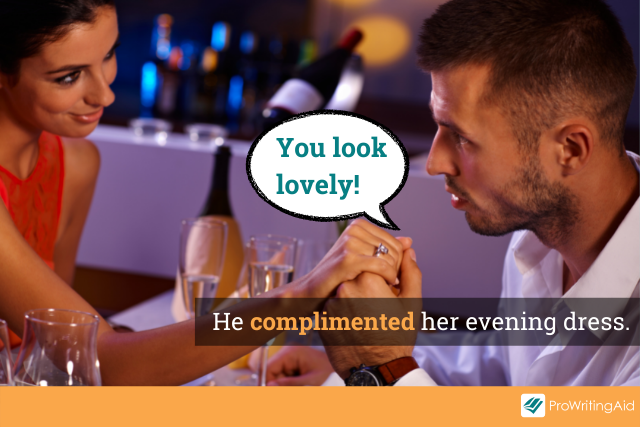 Compliment as a Verb

As a verb, compliment means to say something nice about someone or praise or congratulate them.

It’s closely related to the definition of compliment as a noun, but the difference is that you use the verb form to describe an action. For example:

Synonyms for the verb compliment:

You can see how the verb is simply a way of delivering the noun.

Here are some examples of the word compliment used in sentences: 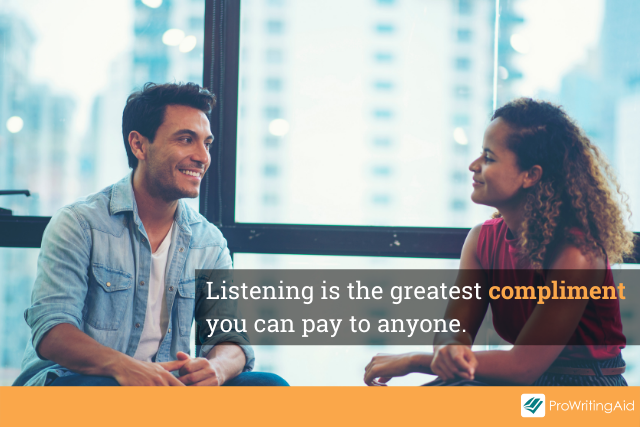 Are Compliment and Complement Homophones?

Complement and compliment are easy to confuse because they sound similar and are only spelled differently by one letter.

Words that sound the same but that have different meanings and spellings are called homophones. The English language has many.

Sometimes, as with these two words, it’s because the root word is the same. Other times the difference is because of the sound and spelling, like the words see and sea.

ProWritingAid has a special report to help writers make sure they are using the right word in their writing. The Homonym Report is built in to our checker so you can spot any possible wrong use and replace it with the correct word for your sentence.

ProWritingAid’s Realtime Report scans your document for any mixed-up homophones that could confuse your readers. 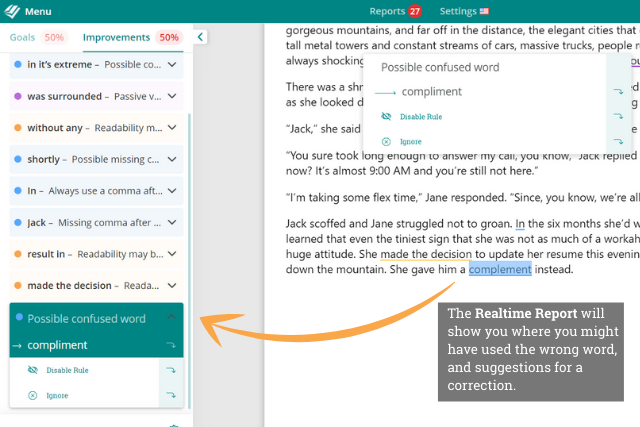 How Do I Remember the Difference Between Complement and Compliment?

Both words are used as both a noun and a verb, and each has a positive meaning.

Now that you understand the difference and have seen some examples, you can use either complement or compliment in the right context.

Use each word correctly to complement your writing and receive compliments on a well-written piece!

Examples of complement in a sentence

Each seemed to enhance and complement the other.
- The long road home by Danielle Steel

Her hairstyle had been chosen to complement her athleticism;
- Poppy done to death by Charlaine Harris

Each has its complement of radio-equipped police cars and vans.
- Men in Blue (Badge of Honor Novels (Paperback)) by W. E. B. Griffin

The wine was an ideal complement.
- The Maverick by Jan Hudson

The whole idea of wine is to complement the meal.
- The Cold Dish by Craig Johnson

Examples of compliment in a sentence

Every compliment hides a criticism.
- Beatrice and Virgil by Yann Martel

He nodded jovially at her as if this were a high compliment.“The
- Ship of magic by Robin Hobb

Valerie warmed to the compliment but at the same time felt there was something strange about it;
- An affair to forget by Rachel Lindsay

I compliment you.”"talking of options, it’s the only one open.
- The Aquitaine Progression by Robert Ludlum

Was that a compliment?
- Deadly Fear by Cynthia Eden

Spelling
What is the difference between 'may' and 'my'?

Spelling
How do I use commas with parenthetical elements?

Spelling
"composed of" vs "comprised of". Which is correct?

Spelling
Have vs Has: What's the Difference?

Spelling
Why should you avoid intensifiers like "absolutely" and "amazingly"?

Spelling
Weak words series: why you should avoid weak adjectives and verbs?