Comradery or Camaraderie: Which Is Correct? 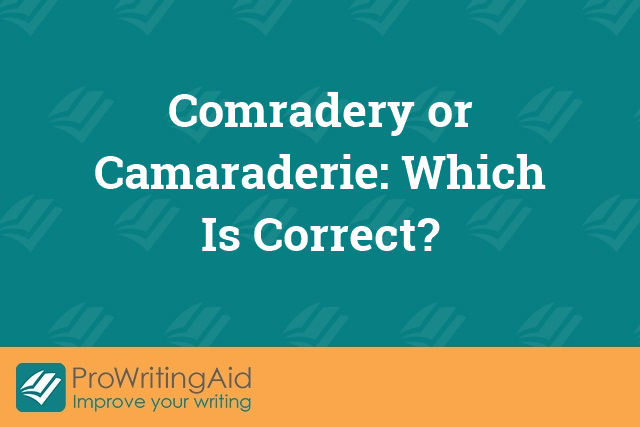 Is it comradery or camaraderie? Are they the same word or different words?

We’re here to break down the difference between the word camaraderie and the word comradery, including the correct spelling and usage.

Camaraderie vs. Comradery: What’s the Difference?

If you’ve ever used the word camaraderie or comradery in your writing, you’ve probably wondered if there’s a difference between these two often confused words.

The short answer is: there isn’t a difference. Comradery and camaraderie are two spellings of the same word. They have the same meaning and origin, and they are typically even pronounced the same. 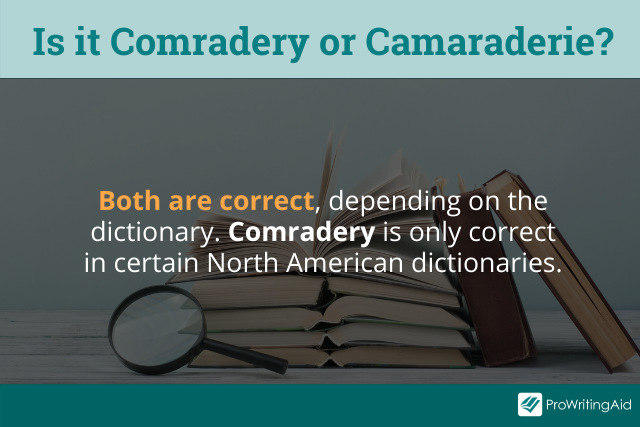 Why do we have two spellings of the same word? Well, it depends on who you ask. Whichever way you spell it, comradery or camaraderie is a fairly recent addition to the English language, appearing less than 200 years ago.

Of the two words, camaraderie is the more widely accepted spelling. In fact, some dictionaries don’t even list comradery as an acceptable alternative.

The word comradery is a North American alternate spelling and Merriam-Webster lists it as a real word. British dictionaries, such as Cambridge Learner’s Dictionary, do not recognize it.

Comradery or camaraderie means a spirit of friendship, goodwill, and fellowship between people. Where do the words come from? 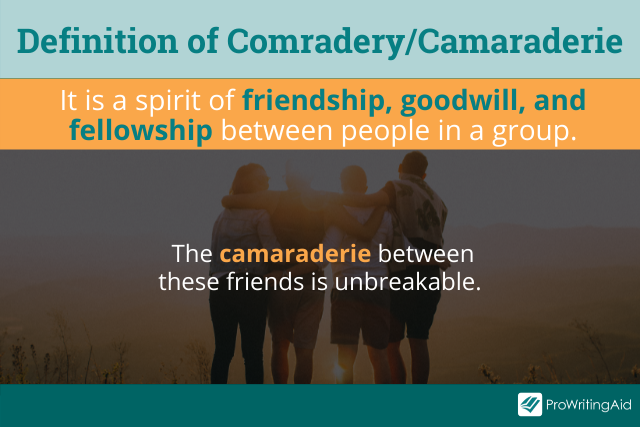 Origins of Camaraderie and Comradery 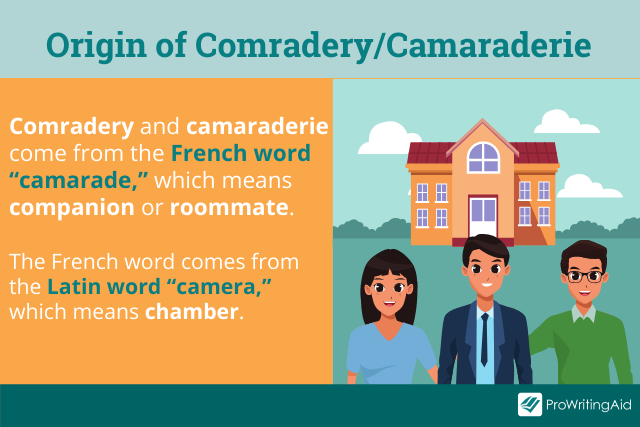 Camaraderie first appeared in the English language around the 1840s. Comradery showed up a couple decades later, probably as a widespread misspelling.

Both words are derived from the French word camarade. Camarade means companion or roommate, or a group sleeping in one room. This word led to both camaraderie and comrade, which means friend or associate.

The French word camarade comes from the Latin word camera, which means chamber. As strange as it is, comradery and camaraderie both share a root with the word chamber.

Pronunciation of Comradery and Camaraderie

One reason that people might use the spelling comradery could have to do with the pronunciation.

The word camaraderie looks like it should have five syllables, and it can be pronounced as such. However, most people drop the sound of the second a. This makes it sound like, “kahm-rah-duh-ree.”

When you pair the missing syllable with the ah sound of the first a, it’s easy to see how the spelling comradery appeared!

Should I Use Comradery or Camaraderie in My Writing? 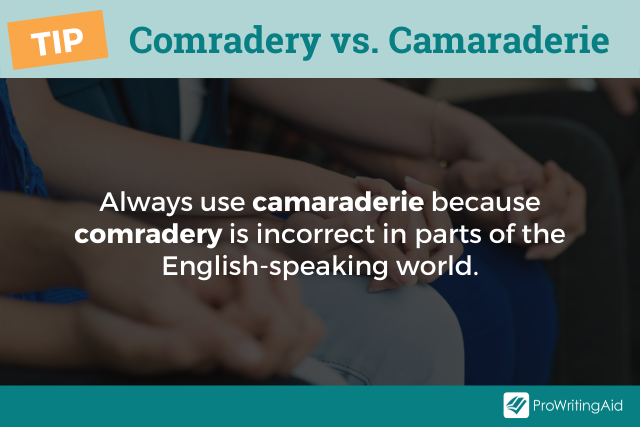 While North American dictionaries list comradery as an acceptable spelling, it’s better to use the form camaraderie in your writing. This is especially true if your readers are from other parts of the world besides the United States.

Even within U.S. English, camaraderie is the more commonly used, and therefore more recognized, spelling. While comradery might not be incorrect depending on the dictionary your style guide uses, some readers might still see it as a spelling error.

If you choose to use the word comradery, be consistent in your spelling. Don’t switch between the two spellings within the same piece of writing.

Avoid spelling inconsistencies like this by using the ProWritingAid Consistency Report. It’s one of twenty reports included in our editing tool.

When to Use Comradery or Camaraderie (with Examples)

Camaraderie is a great word to describe a unique sense of community and friendship. Let’s take a look at some example sentences that use comradery or camaraderie. 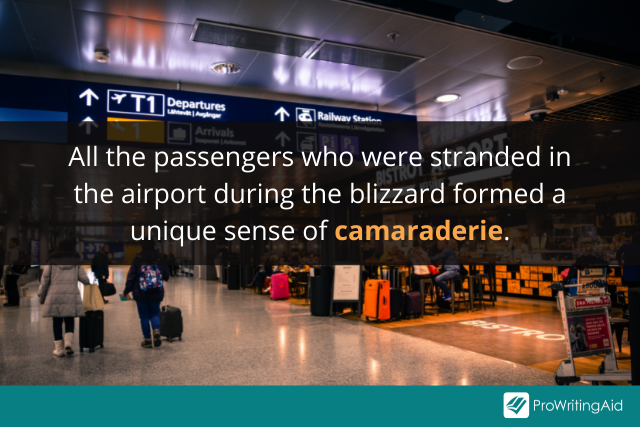 If you have used the word camaraderie too many times, or if it just doesn’t feel quite right, you can turn to ProWritingAid’s Word Explorer for help. Type in any word and you will be met with a wealth of useful content, including synonyms and antonyms. 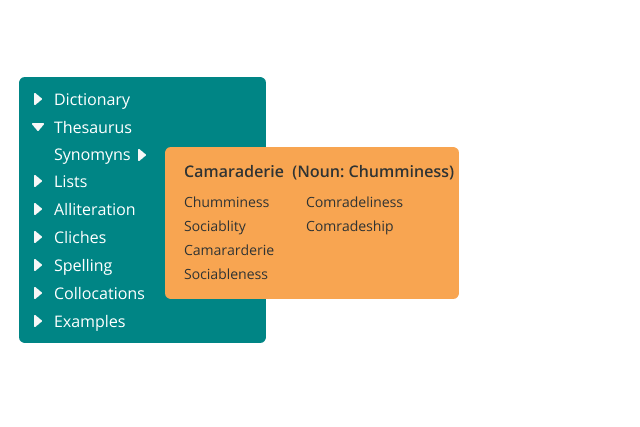 Famous Examples of Comradery or Camaraderie

There are also some famous examples of both comradery and camaraderie.

Here are some quotes that use the spelling comradery:

“I hate gym as I would any class that culminated in a group shower with twenty-seven boys, each of whom felt it a sublime statement of comradery to flick the wet end of a towel against another’s backside.”—Robert Morrison

“Over the past two years, there have been many moments of inspiring innovation and comradery.”—Emily Mcevilly

And here are some quotes that use the spelling camaraderie:

“Sports are such a great teacher. I think of everything they’ve taught me: camaraderie, humility, how to resolve differences.”—Kobe Bryant

“As a kid who wasn’t into sports, at school I felt almost alienated at times, whereas in the theatre community there was this amazing sense of camaraderie.”—Zach Braff

However you spell it, comradery or camaraderie means a general feeling of friendship and fellowship that everyone desires.