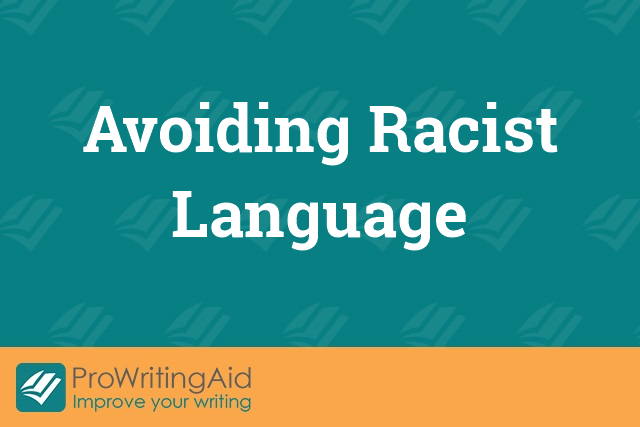 A surefire way to destroy collegiality and respect in your workplace, among colleagues or employees, or clients is to use racially insensitive language.

It’s imperative that your professional communication is respectful and inclusive to your audience or subject. ProWritingAid provides essential support to help you maintain respect and inclusivity by flagging inappropriate terms in your work.

Race and ethnicity are often used interchangeably, though they shouldn’t be.

Race refers to physical characteristics. Racial categories include, though are not limited to: Aboriginal, American Indian or Alaska Native, Asian, Black or African American, Native Hawaiian or Other Pacific Islander, White.

People of different races can share ethnicity. For example, there are Black Italians, Asian Italians, and White Italians; though their racial features are different, these groups share their Italian ethnicity.

There are many well-known terms referencing race or ethnicity that are no longer used due to their demeaning/disrespectful connotations. Those well-known words do not appear on the list below. Only those that are perhaps less-known are included.

Unfortunately, the list of racial slurs and pejoratives is extremely long and even has its own Wikipedia page. While you are most likely aware of the ones familiar to your area, you need to be certain to avoid using those that are unfamiliar to you accidentally. Let ProWritingAid help you avoid those accidents and the hurt such words can bring to your audience and your business.

Style Improvements
What is the difference between "advise" and "advice"?

Style Improvements
A While vs. Awhile: What's the Difference?

Style Improvements
Have vs. Has: What's the Difference?