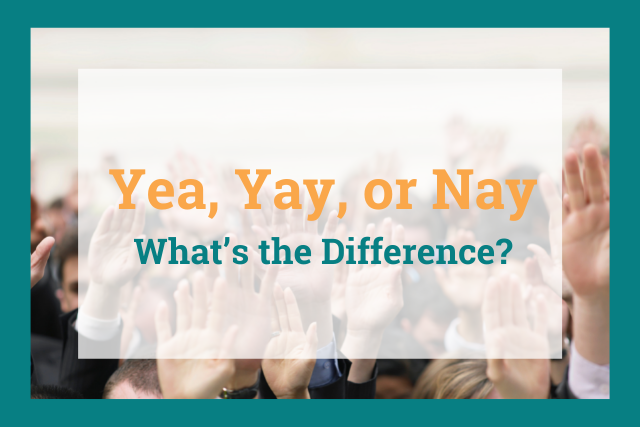 Today we are diving into the difference between yay or nay, the ways we use them, and all the different ways to spell them.

The Correct Spelling of Yay or Nay

In most situations, the correct spelling is yea and nay. Yay is a different word that shows excitement. Most dictionaries say that the word yay and the word yea are distinct. Only Collins English Dictionary offers yay as an alternative spelling to yea. 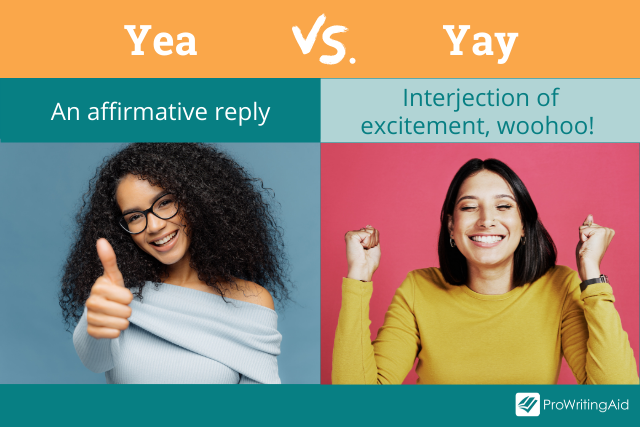 The word yea is also different from yeah, even though they have similar meanings. In fact, yeah is derived from yea. We’ll cover more about the different uses of these alternative words later.

Don’t confuse the word nay with the word neigh. Although these words are homophones, they are not interchangeable. Nay means no. Neigh is the onomatopoeia for the sound a horse makes.

ProWritingAid’s free editing tool is a great way to check for spelling errors and even correct homophone usage. Use the Homonyms Report to avoid mixing up words like nay and neigh.

What’s the Difference Between Yea and Nay?

The difference between yea and nay is simple. Yea means yes. Nay means no.

But we don’t use yea or nay in everyday speech anymore. Your boss might look at you strangely if you answer her question with “Nay!”

Usually, we see yea or nay used in archaic texts. It’s also used in many government and business settings for voting; however even this is going out of style as more people begin to just use yes or no. 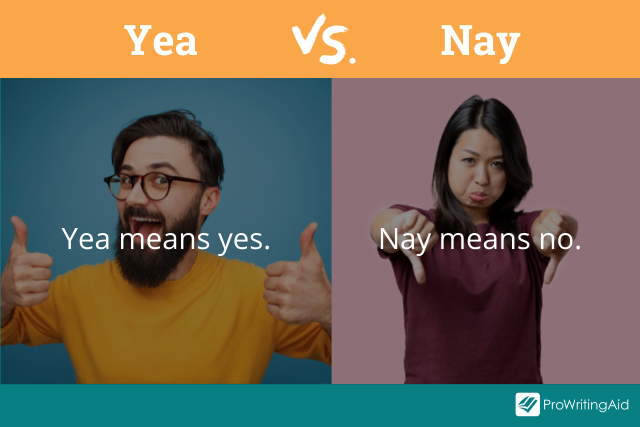 The spelling yay, on the other hand, is actually an interjection that shows excitement! It’s a synonym for “woohoo!”

The Meaning of Yea or Nay

Yea and yes are both adverbs that show an affirmative reply, while nay and no are both negative replies.

Yea has a few additional meanings as an adverb.

It can be used to show emphasis, in a way that means “not just this but also this.” This quote from J.G. Harrison demonstrates what this looks like in action: “...yet the impression, yea the evidence, is inescapable.”

Yea is also used informally to mean “this much.” If you’re describing someone you can say, “he was about yea high” and gesture to how tall they were. 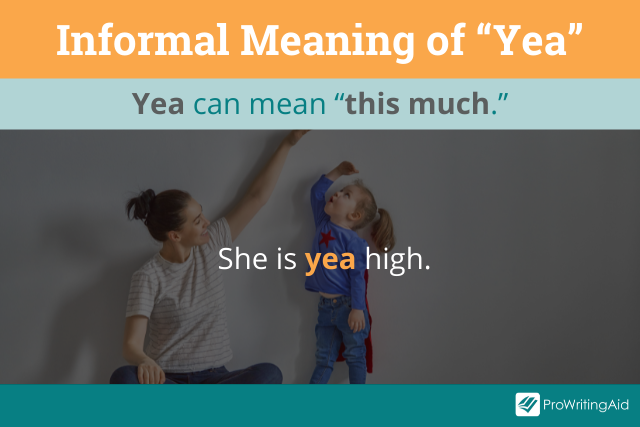 The two words yea or nay derive from Middle English. Yea was originally ye or ya. These both come from the Old English word gēa, which means yes.

The word yes comes from the Old English gēse, which essentially meant “be it.” Both yea and yes date to before the 12th century.

Nay didn’t appear in early modern English until after “no,” even though it sounds like it should be older.

The word no dates to before the 12th century and has a complicated etymology with roots in Old Norse, Old High German, Latin, and Greek.

Nay appears in modern English around the 13th century. It derives from the Old Norse nei, which translates to “not ever.”

Yea or Nay in Voting

Yea and nay are often used in a spoken context for voting. The United States Senate still uses these two words for their roll call votes.

Some other small governing bodies, like city councils, still use yea or nay as well. 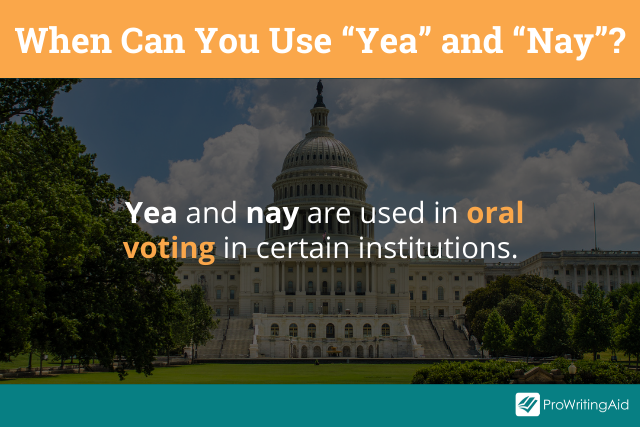 How to Use Yay

Because most dictionaries define yay and yea differently, we use these words differently. Here’s how to use yea as an affirmative and yay as an interjection.

Yea as an Affirmative

If you’re voting on something, you can say yea to express a yes vote. Depending on your style guide and which dictionary you use, you can also use the word yay. However, most of the time this is a spelling error.

Yay as an Interjection

Yay is a recent addition to the English language. It dates back to the 1960s and it means “woohoo!” You might use it the same way you would use an excited and emphatic “YES!”

Some people spell the interjection yay as yea. This spelling was more common a few decades ago, however it is a spelling error. If you want to express excitement, the correct spelling is yay.

How to Use Nay

In today’s world, we don’t hear the word nay very often. You might hear a nay vote at a municipal meeting or even a business meeting, but that is it.

Another way to use nay is to correct a word with a better synonym. It’s a type of emphasis used in literary or rhetorical settings and it’s fairly old-fashioned. Here are a few examples of what this looks like:

While it’s not incorrect to use nay in this sense, it sounds antiquated. Using nay like this will make your writing sound pretentious at best, and at worst sarcastic. Make sure the context is appropriate if you use it outside of oral voting.

Other Ways to Say Yay or Nay

There are a few other ways to say yea or nay. They have similar meanings, but they are used in entirely different contexts. Let’s cover a few of these in greater detail. 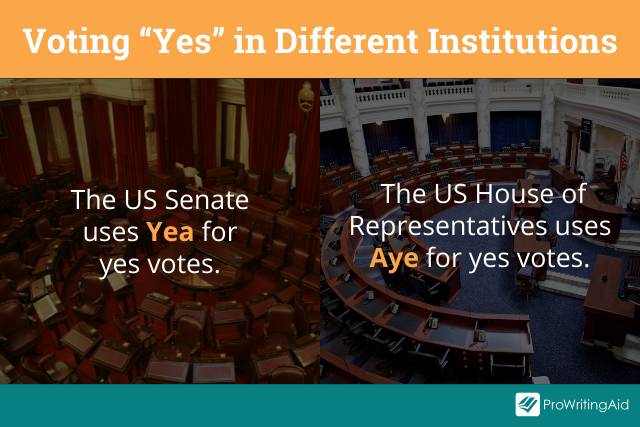 An acceptable alternative to yea is “aye.” In modern English, aye is primarily used in oral voting.

Interestingly, while yea is used by the United States Senate, aye is used by the House of Representatives for the yes vote. Aye is also used in the UK Parliament for an affirmative vote.

Other institutions also use aye for the yes vote. You might hear, “All in favor say, ‘aye!’” at a board meeting.

Aye means yes, and it has an interesting origin. It dates to the 13th century with the meaning “always.” However, it wasn’t until the mid-1500s that it became another way to say yes or yea. How it evolved to that definition is unclear.

Certain parts of the English-speaking world use aye as a way to say yes in everyday speech. This is particularly common in the north of England and in Scotland. 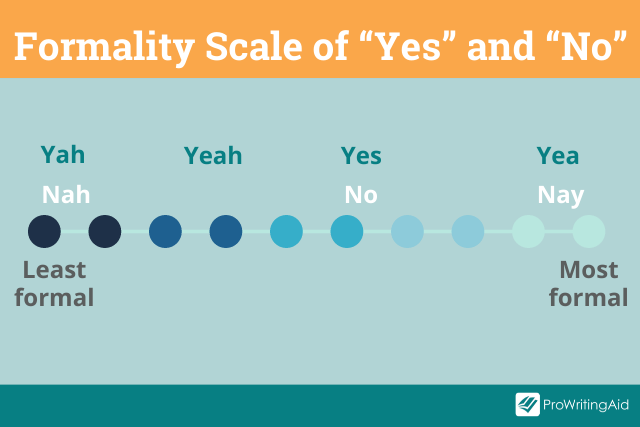 The informal version of yea or nay is yeah or nah. These are slang words for yes and no. It’s important to note that yea is pronounced with a long “a” sound. Writing yeah as yea is a spelling error.

Yeah has become more acceptable in everyday speech than its counterpart nah.

In most settings, and particularly among older generations, saying nah instead of no has an almost rude connotation. It’s also common for people to use yah or yuh for yes, but this is very informal.

You can think of these alternative forms of yes and no as a spectrum.

On the very informal end we have yah and nah. Yeah is somewhere between yah and yes. Yes and no are right in the middle of the spectrum. On the formal end you can find yea and nay, usually in a voting chamber.

kyle.kucera1
Thank you for your comment! Before we post articles, we do our best to fact check what we're posting - even if it's something we think we know for sure. Just to be extra safe, I have looked up both "yea" and "yay" within the Merriam-Webster dictionary. "Yea" is used as an affirmative vote. "Yay" is used for an excited exclamation. There is no indication of "yea" being used in place of an excited exclamation. Likewise, "donut" is merely a less common spelling of "doughnut."