Story Retelling: How to Write a Retell (with Examples) 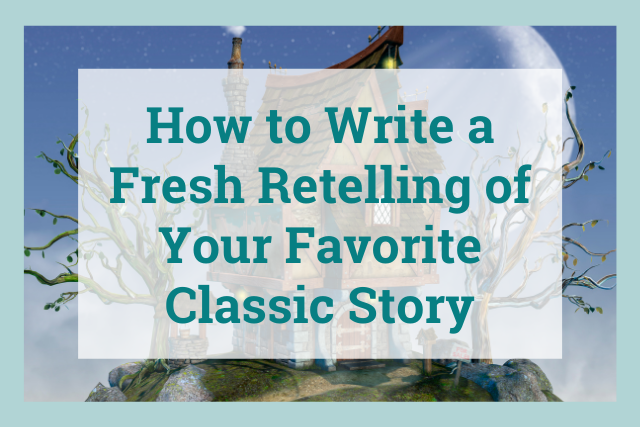 They’re all settings for popular retellings of Romeo and Juliet—Chloe Gong’s These Violent Delights, Broadway’s West Side Story, and Lauren James’ The Loneliest Girl in the Universe, respectively. 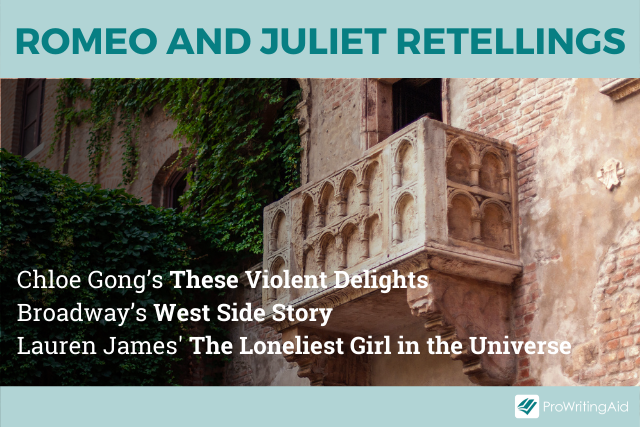 Retellings are a classic art form, and they’re a popular trend in the fiction industry right now. Writing a retelling is an easy way for emerging authors to gain traction.

Readers know the classic stories they like and will gravitate toward a story with a pitch, like Jane Eyre set on a modern university campus, or Cinderella told from the ugly stepsister’s perspective, even if they’ve never heard of the author. 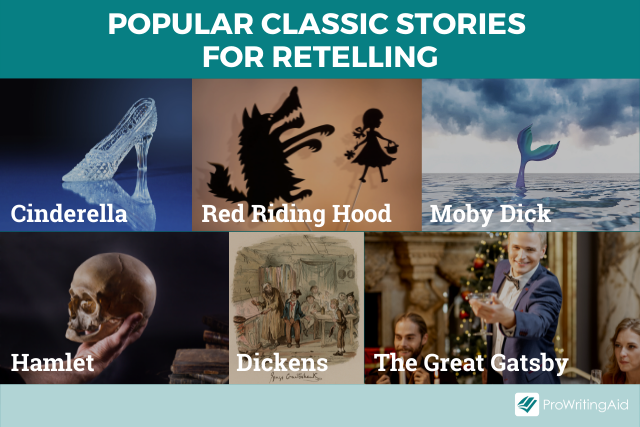 If there are any classic stories that you know and love, a retelling can be a fun option to consider for your next project.

Read on to learn how to write a unique retelling that will make readers see an old story in a new light.

What Kinds of Stories Are Good for Retellings?

There are countless popular tales from cultures around the world that would make fantastic fodder for a retelling.

Decide what kind of story you’re interested in writing—a funny story, a tragic story, a heart-warming story, or something else entirely. Then, find a classic story that fits the style you gravitate toward.

Here are four categories of classic stories to consider. 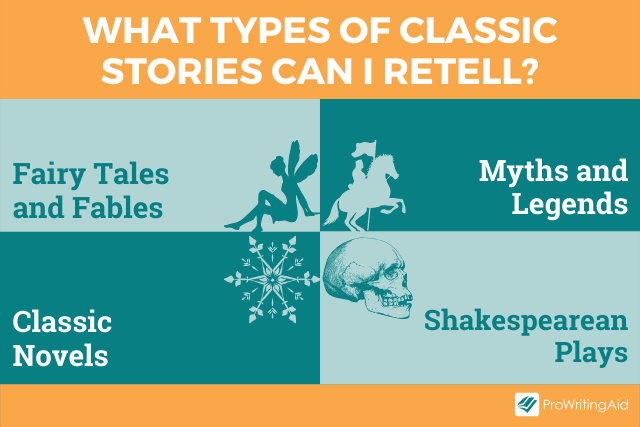 Fairy tales and fables lend themselves especially well to retellings, perhaps because so many versions of each story already exist. Most of these tales were passed down through word of mouth, instead of stemming from a single source, so they naturally evolved over time.

It might feel daunting to join such a crowded space, but no one else has the same perspective you do. Trust that you have something new to bring to the table.

Myths and legends are another fantastic option. Many of these stories are beautiful and continue to resonate with people today.

If you use a myth from a culture other than your own, take a step back to consider whether you’re the right writer for this retelling. You always want to pay homage to your source material, rather than take advantage of it.

Shakespeare’s work is in a league of its own for classic stories that we use as a cultural touchstone.

You can decide how closely you want to stick with the source material. Some retellings use Shakespeare’s verses word-for-word, while others only quote a few key lines or loosely retain the original plot.

Last but not least, you can always build on the work of other novelists.

If you choose this option, it’s more likely that there will be a single source for you to draw from, instead of needing to research countless existing versions and retellings. This is a trade-off: it makes your research simpler, but it also gives you fewer options for new directions in which to take the story.

Regardless of which category you decide to draw from, the most important thing is to choose a story that speaks to you.

You’ll need to spend a lot of time with the source material—and with existing retellings—to do the story justice. Choosing the right story will make the writing process much more rewarding.

How Do I Retell an Old Story in a New Way?

Once you’ve gotten to know your source material well, it’s time to find a unique angle for your version of the story.

The key to writing a retelling is to change one or more of the most crucial elements of the original story. Most retellings rely primarily on one of these three strategies: 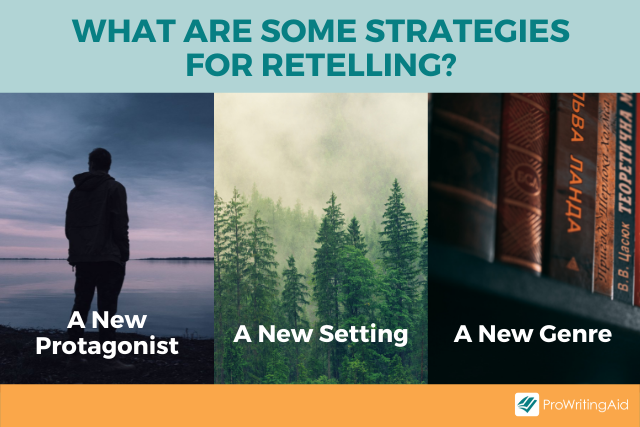 Let’s examine each of these three elements and discuss how to get started with each strategy.

How Do You Rewrite a Story with a Different Main Character?

The first strategy is to tell the story through the eyes of a character who isn’t the usual protagonist.

Each new lens drastically changes the meaning of the story and its emotional heft.

This type of retelling reminds readers to keep an open mind. Every character feels like the protagonist of his or her own life, and retellings with new protagonists show us that there can be many sides to the same story.

Examples of retellings with a new protagonist:

If you want to write a retelling with a new protagonist, you should start with these steps:

Step 1. Make a list of the major characters in the original story, including the antagonist and major side characters.

Step 2. Identify the characters on your list who might have an interesting and unique point of view. Ask yourself:

Step 3. Sketch out a potential story arc from your chosen character’s perspective. Ask yourself:

ProWritingAid’s Pacing Report can help you write an interesting character arc. It identifies slower paced parts of your manuscript so that you can effectively balance introspection with action. 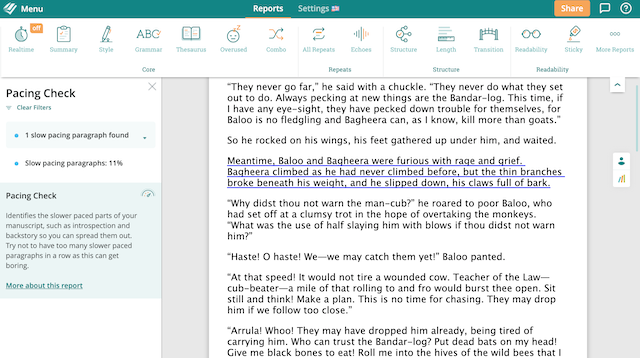 How Do You Change the Setting when Retelling a Story?

Another strategy is to change the setting of the story. You preserve the backbone of the original story, but set it a different time period and place.

One common way to do this is by modernizing an older story by setting it in a modern-day workplace, school, or neighborhood. Many authors use this strategy to make classic stories accessible to readers.

Another way to do this is to transplant a story to the context of a different country or culture. For example, you could tell the story of Snow White set in medieval India instead of in medieval Europe.

Examples of retellings that change the setting:

If you want to change the setting, you should start with these steps:

Step 1. Summarize the core premise of the original story in a single sentence, without mentioning the setting. For example, you might summarize Mulan this way: “A woman disguises herself as a man in order to keep her family safe.” 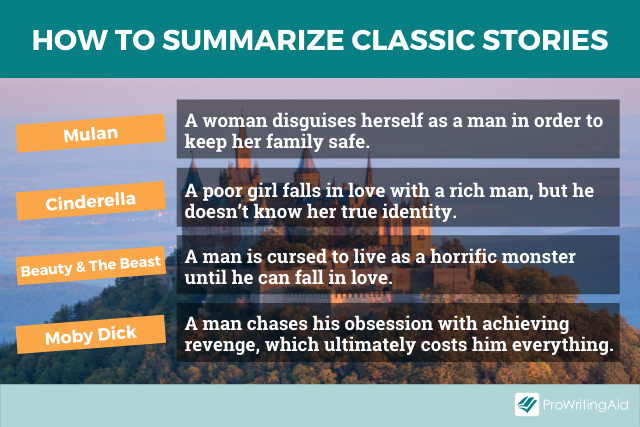 Step 2. Brainstorm a variety of potential settings you find compelling. Try to choose ones that are drastically different from the original setting of the story. If you’re out of ideas, here are some settings to start with:

Step 3. Pick your favorite setting from Step 2 and combine it with the summary you wrote in Step 1. For example: “A woman disguises herself as a man in order to keep her family safe—at a technology company in Silicon Valley.” Ask yourself:

How Do You Rewrite a Story in a Different Genre?

The last strategy is to tell the same story with a different genre.

The most important thing to remember is that the genre should be part of the fundamental skeleton of the story itself, not just an afterthought. When you change the genre, some element of the new genre needs to drive the narrative arc. 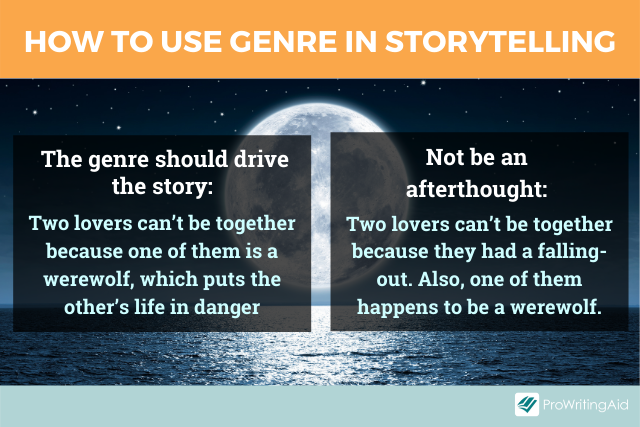 Examples of retellings that change the genre:

If you want to write a retelling with a new genre, you can start with these three steps:

Step 1. Choose your new genre and, better yet, your sub-genre. If you normally write in one genre, you may already know what you want to write. Otherwise, here are some options to consider:

Step 2. Choose a specific element of your new genre—such as mythical creatures, portals to other worlds, or an alien invasion—that would cast the story in a whole new light. How will the core conflict of the story be driven by this specific element?

Step 3. Research the common tropes of the genre you’ve chosen and make a list of the ones you like. Could you introduce any of these tropes into your retelling? How would they affect the original story?

How Do You Stay True to Yourself when Writing a Retelling?

Ultimately, the most important thing is to tell a story that feels authentic to you.

Think about your own life and the experiences that have shaped you most. How can you use those to inform the story you want to tell? What’s unique about the way you see the world? 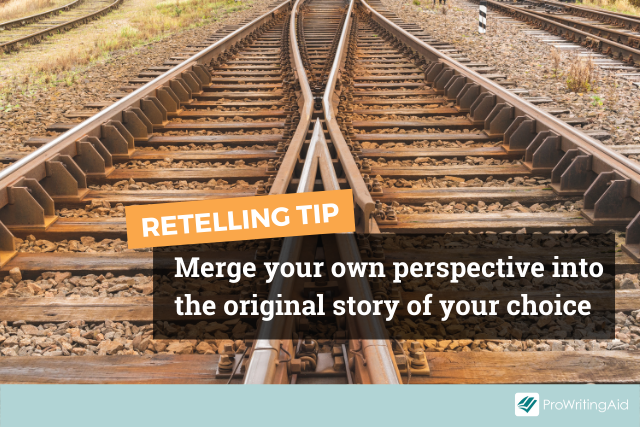 If you’re part of a historically marginalized group, you can make the story your own simply by bringing in a new point of view. Many traditional stories lack the diversity and inclusivity of our society today, so bringing in your point of view makes it possible for modern readers to see themselves reflected in the stories that they love.

Don’t be afraid to take risks and try new things.

All artists steal. The key is to know how to steal in a way that honors and acknowledges the original work while building something new.

If you’re ever worried about plagiarism, you can use ProWritingAid’s plagiarism checker to check how much of your draft is original.

As long as you treat the original story with respect, the only limit is your own creativity.

These are the most common strategies to write a retelling, as well as some of our favorite examples.

What are your favorite retellings? Let us know in the comments below.