What is the difference between 'mad' and 'made'? 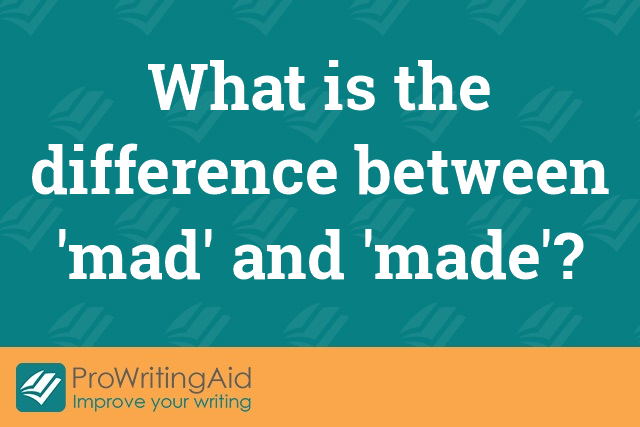 The words mad and made are often confused because they look similar. We'll explain the difference.

Made means the past tense and past participle form of the verb 'make' when used as a verb.

Mad means angry, insane or mentally deranged when used as an adjective.

A good way to remember the difference is Made is spelled like Make with a D instead of a K.

Out of the two words, 'made' is the most common. It appears about 53 times more frequently than 'mad'.

It's easy to mistype words with similar spellings like mad and made.

Made is the simple past tense and past participle of the verb "to make."

Mad is an adjective. It can mean "angry" or "crazy, insane." In America, it is more common to use it to mean "angry," while in Britain, it usually means "insane."

You should use 'mad as a hatter'. These phrases are often confused because of their similar spelling.

What's the correct phrase 'made of money' or 'mad of money'?

The correct phrase is 'made of money'. These phrases are often confused because they look similar.

Some synonyms of made are: created, formed, shaped, fashioned .

Examples of mad in a sentence

She was all-out Indian-mad;
- Cropper's cabin by Jim Thompson

Sweeping gestures were the same thing as getting mad and throwing a plate at the wall.
- Some Girls: My Life in a Harem by Jillian Lauren

Once reunited, the magic bulls went mad in an attempt to destroy each other.
- The Hound of Rowan by Henry H. Neff

Make me out a bit mad.
- Doctor No by Ian Fleming

Some of them were so chagrined that they went mad.
- Demon Lord of Karanda by David Eddings

Examples of made in a sentence

But I knew there wasn't any way—not after I'd made him put a handle on my name.
- Cropper's cabin by Jim Thompson

Shed made that clear last night.
- Nothing gold can stay by Dana Stabenow

Wise kings made laws that wise folk willingly obeyed.
- The Rise and Fall of a Dragonking by Lynn Abbey

Sitting down at the remaining intact computer, he typed out a note and made five copies of it.
- Mystery Bride by B. J. Daniels

The words kept blurring on the page, and none of the clues made sense;
- In the night room: a novel by Peter Straub