The Grammar Guide Spelling What is the difference between 'tow' and 'two'?

What is the difference between 'tow' and 'two'? 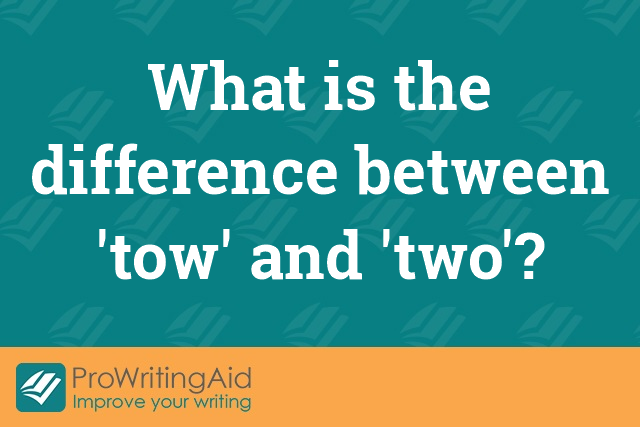 The words tow and two are often confused by writers. We'll help you to understand the difference.

Two means the number after one when used as a noun.

Tow means to pull or haul by a rope, chain, or similar method when used as a verb.

A good way to remember the difference is Tow is the act of towing.

Out of the two words, 'two' is the most common. It appears about 412 times more frequently than 'tow'.

Two and tow are easy to confuse because they have the same letters in a different order.

Two is the number after one.

Tow is a verb than means to "haul or pull by a rope or chain." It can also be a noun that means "the act of towing."

The right expression is 'lesser of two evils'. These phrases are often confused by writers.

Some synonyms of tow are: haul, pull, schlep.

Examples of tow in a sentence

We are not hammering on her door in the middle of the night with a uniformed cop in tow.
- The Singing of the Dead by Dana Stabenow

The woman spotted Gia and angled her way with the cameraman in tow.
- The Haunted Air by F. Paul Wilson

If my offer is accepted, I will float the ship and tow it off before I dismantle it.
- Ship of magic by Robin Hobb

Can you tow it here?"
- Mine by Robert R. McCammon

The next time Ari returned to Brunei, she had Serena in tow.
- Some Girls: My Life in a Harem by Jillian Lauren

Examples of two in a sentence

TWO
- The Battle of the Labyrinth by Rick Riordan

She made one or two rather cutting remarks about him.
- Weighed in the balance by Anne Perry

They left, taking the stairs two at a time.
- The wandering fire by Guy Gavriel Kay

TWO
- Nothing gold can stay by Dana Stabenow

It was worth a stare or two.
- Touch of Darkness by C. T. Adams; Cathy Clamp

Spelling
It's vs Its: When Should You Use Them

Spelling
What is the difference between 'pray' and 'prey'?