Get 50% OFF Lifetime and Yearly Plans in our Cyber Monday Sale 💙
Learn More
ProWritingAid
ProWritingAid
The Grammar Guide Abbreviations Why to avoid using noun together with "it"?

Why to avoid using noun together with "it"? 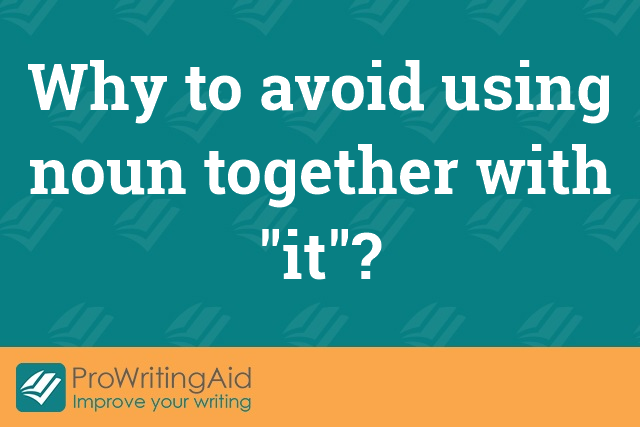 It is a pronoun, which means it replaces a noun. Because it functions just like the noun that it replaces, you should not use it with a noun preceding or following it. You should only use it if it's clear which noun you are referring to.

Incorrect: The cat it drank milk.

A pronoun is a word that replaces a noun. It is a type of noun, and it functions just like a regular noun. It is a pronoun that replaces a singular, non-human noun. It follows the grammatical rules of the third-person singular point of view. Because it is a pronoun, you do not put the associated noun next to it. It takes the place of the noun completely. However, it must be clear to your readers what noun you are referring to, so make sure you have used that noun in a nearby sentence.

Incorrect: The chair is an antique. The chair it belonged to my grandmother.

Correct: The chair is an antique. It belonged to my grandmother.

Incorrect: The volume is too loud. Turn it the volume down.

Correct: The volume is too loud. Turn it down.

Like most English grammar rules, there is an exception. Sometimes, the noun can precede the sentence that uses it for added emphasis. This is not used in formal or technical writing, and it should only be used in creative writing sparingly. You must also put a comma after the noun and before it.

Example: The wine, it is delicious.

Abbreviations
Should I use spaces around an en-dash?

Abbreviations
When do you need to use an em-dash?

Abbreviations
Should I use spaces around an em-dash?

Abbreviations
What's the difference between a coordinate adjective and a hierarchical adjective?

Abbreviations
Should I use a comma between two adjectives?

Abbreviations
Should I use a comma before and after vocative?

Abbreviations
How to Use ProWritingAid’s Tone Detector

Abbreviations
What is the difference between 'may' and 'my'?

Abbreviations
How do I use commas with parenthetical elements?