Can we remove "as well" from the sentence? 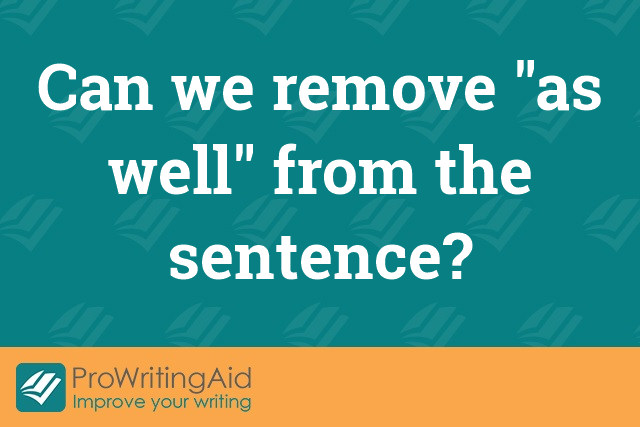 If you are writing a sentence with the words as well, you can omit it to make your writing more clear and concise. It's often better to rephrase sentences without as well to make them easier to understand.

While the first example is grammatically correct, the second example is clearer and less wordy.

In English, more words do not necessarily mean better writing. While a sentence might be grammatically correct, extra words and phrases can make a sentence too wordy and more difficult to understand. As well is an example of a phrase that can make a sentence unclear. Sometimes, as well can be removed completely. Other times, it’s better to rephrase the sentence.

The phrase as well as is a different matter. It is often the most succinct way to compare two things. It can also mean in addition to. In these cases, deleting as well is not necessary.

Abbreviations
What is the difference between 'may' and 'my'?

Abbreviations
How do I use commas with parenthetical elements?

Abbreviations
"composed of" vs "comprised of". Which is correct?

Abbreviations
Have vs Has: What's the Difference?

Abbreviations
Should I use a comma between two adjectives?

Abbreviations
Why should you avoid intensifiers like "absolutely" and "amazingly"?

Abbreviations
Weak words series: why you should avoid weak adjectives and verbs?